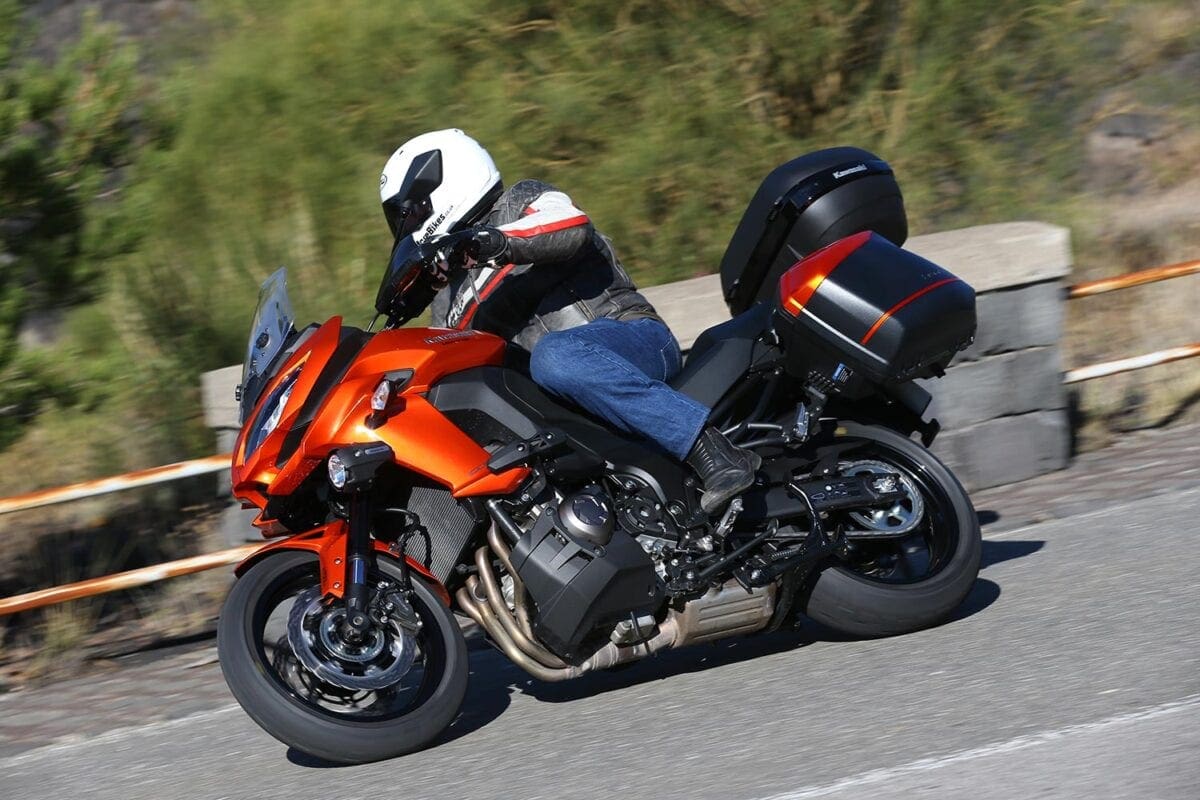 The Versys 1000 is more than just a facelift. It’s also more than just a bigger version of the 650. And, according to Kawasaki, it’s not an ‘Adventure bike’. While many similar machines are sold to owners as likely to take to the mud as they are a GP circuit, Kawasaki is still taking a bold step in distancing itself from this cluttered genre. The trouble is, I wouldn’t call it a ‘Sports Tourer’ either… 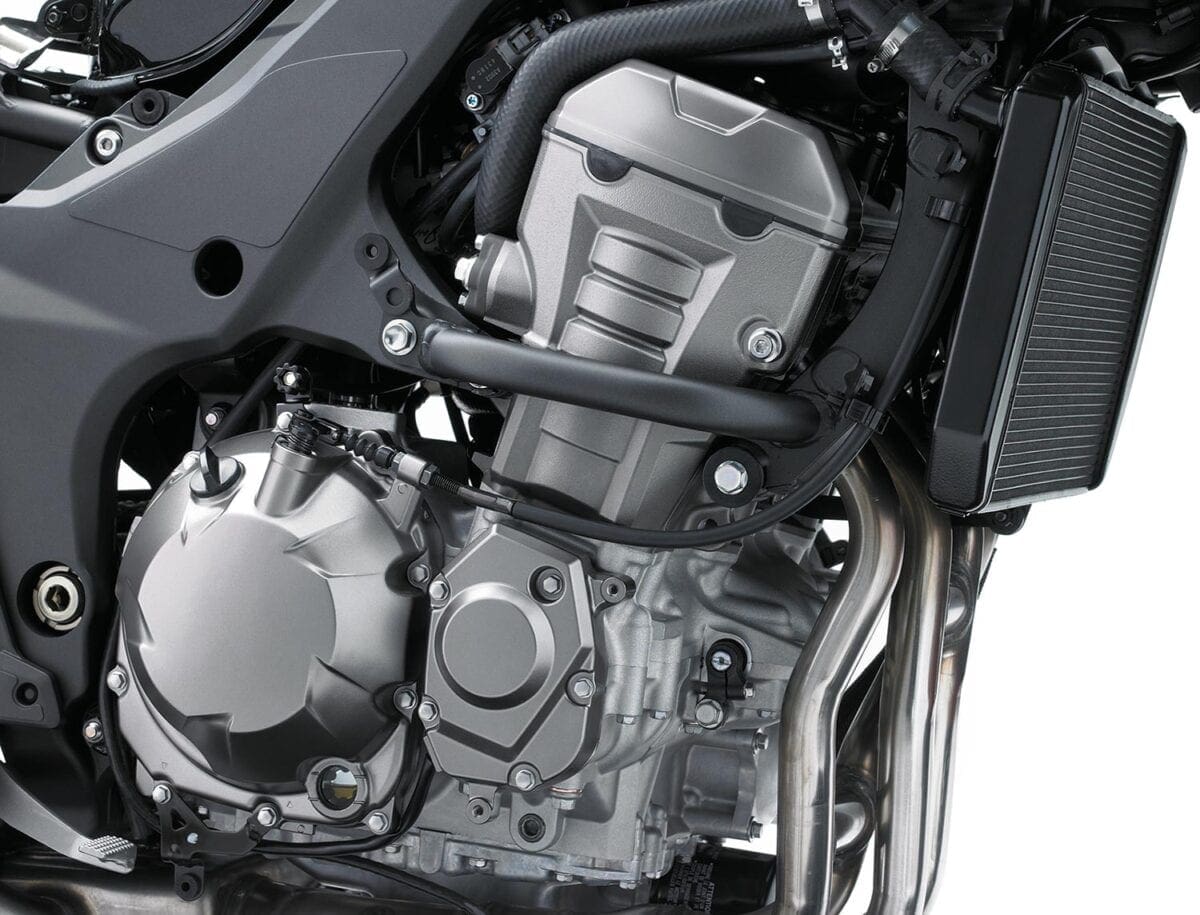 Also new is an Assist & Slipper clutch – Assist allows the clutch to require less of a tug at the lever, making it easier on long journeys or through town. Slipper helps to prevent the rear wheel locking when changing down aggressively. 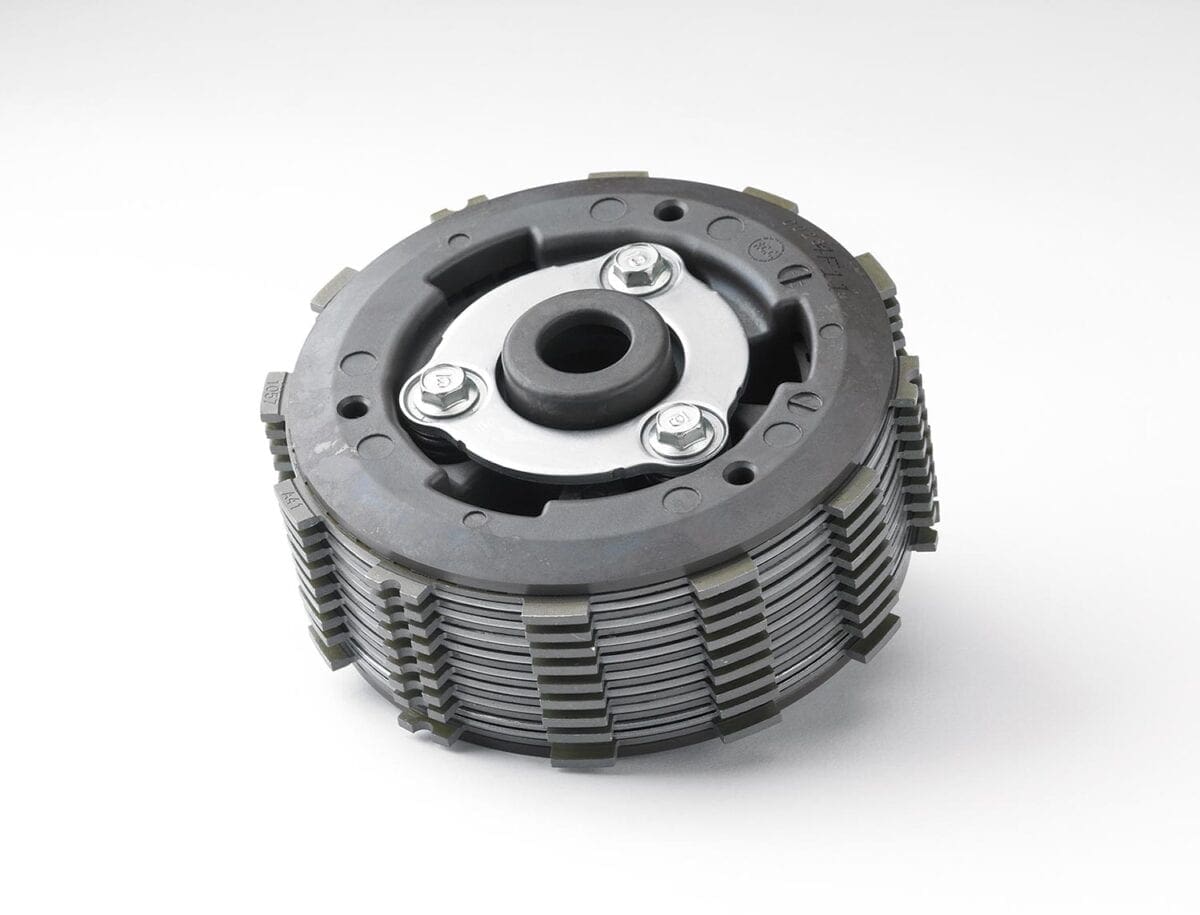 There are two power modes, selectable from the left bar’s switchgear. ‘Full’ is, unsurprisingly, full power, while ‘Low’ reduces the motor’s output to 75%, along with a milder throttle response and a flatter torque curve. This, combined with three-level traction control (which can also be selected or turned off from the left bar), makes for a very usable motor. 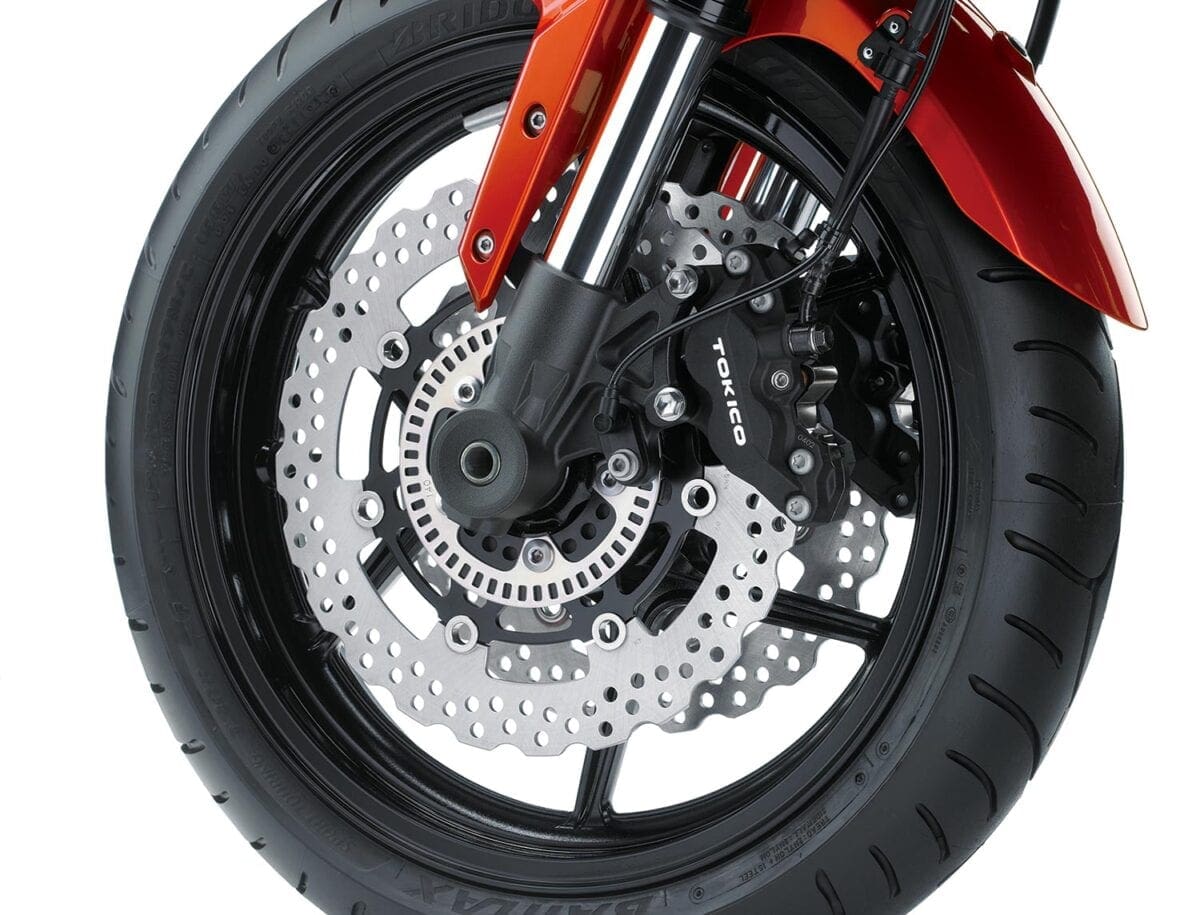 While the chassis looks like the previous model, the aluminium twin-beam frame now features rubber engine mounts to minimise vibration (they work). It also shares the design style of the Z1000SX, though here we see a change to the rake and trail, the footpegs are rubber mounted, and there’s a centre-stand fitted. If you’re going touring on a bike, and don’t have shaft-drive, then you want a centre-stand. Too many bikes these days don’t have them, so go to the head of the class, Versys 1000. 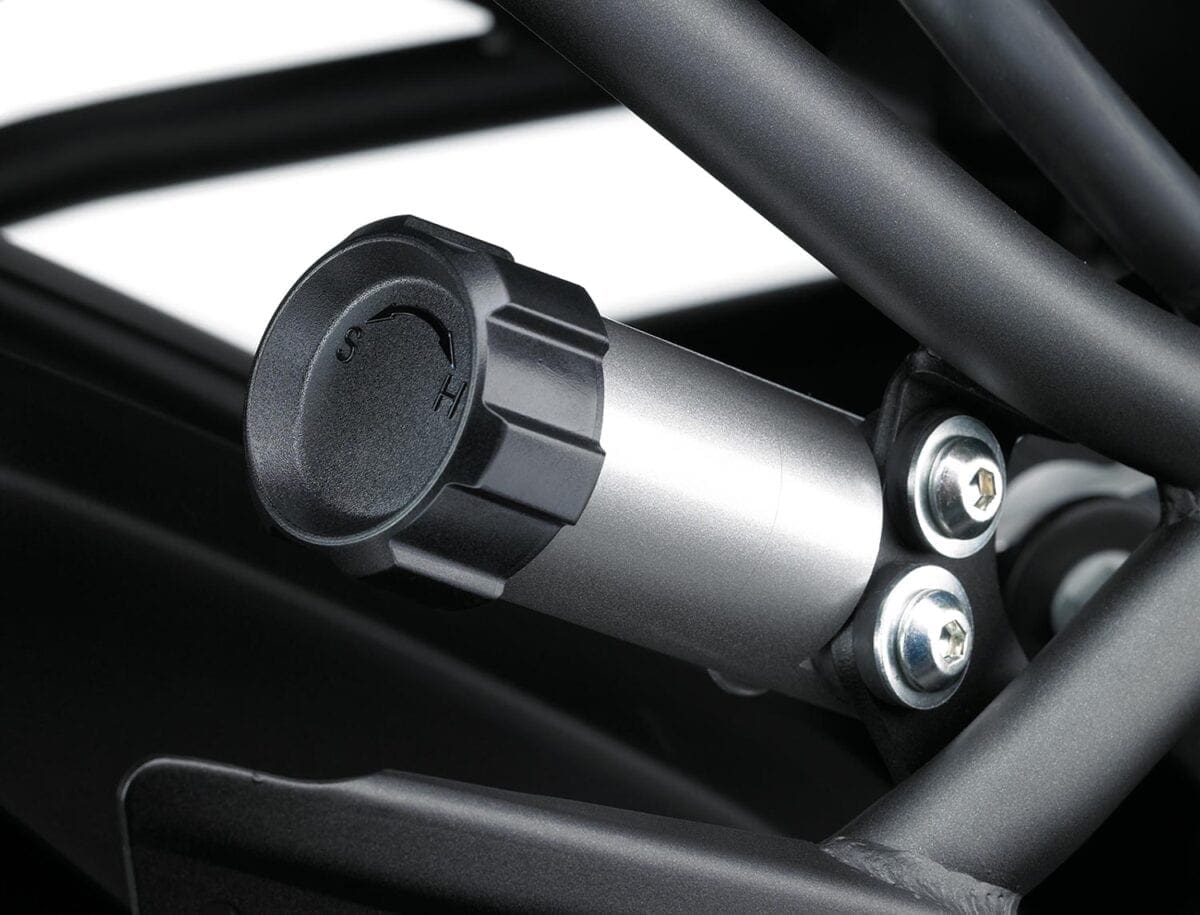 The subframe is now strengthened, allowing a greater top-box capacity, and the ‘direct mount’ luggage system sees the panniers clipping into the grab rails, and onto a small bracket by the pillion footrests. The top box’s base-plate bolts to the grab rails, so even with the full luggage, when you take it off you’re not left with a bike covered in messy framework. 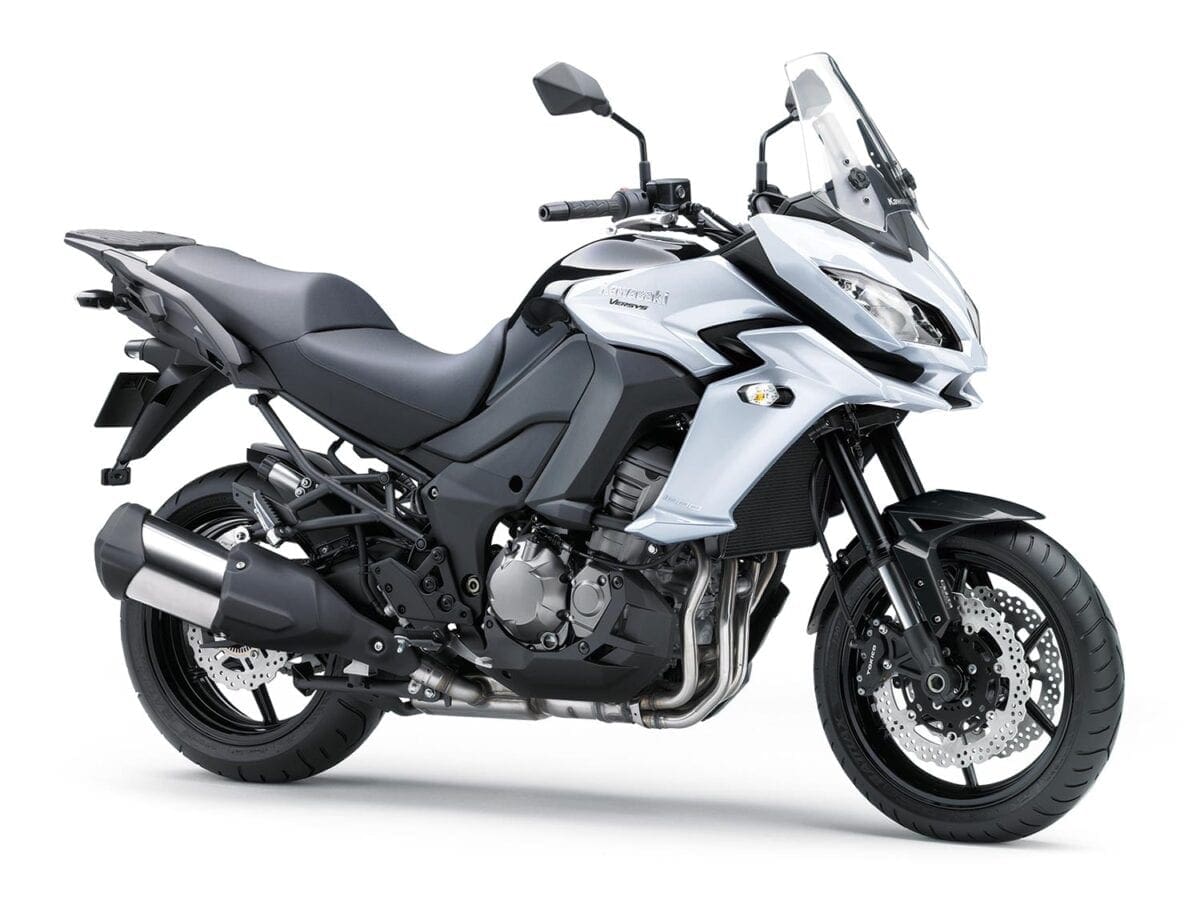 In keeping with the aim of distancing the bike from the adventure market, the Pirelli Scorpion Trail tyres have been replaced with Bridgestone Battlax Sport Touring T30s. These are wrapped around 120/70/17 and 180/55/17 wheels, and carried by more rigid 43mm upside-down forks with rebound and preload adjustment at the front, and a gas-charged shock at the back with rebound adjustment and a remote preload adjuster.

With the centre-stand, strengthened subframe and new bodywork, the thou has gained 11kg, though the rear spring has been uprated to cope with it.

There are larger, twin 310mm petal-shaped discs up front, bitten by four-piston calipers carrying new brake pads (they now use the same material as the Z1000). The rear brake is a 250mm petal disc with a single-piston caliper. All UK models come with ABS as standard. 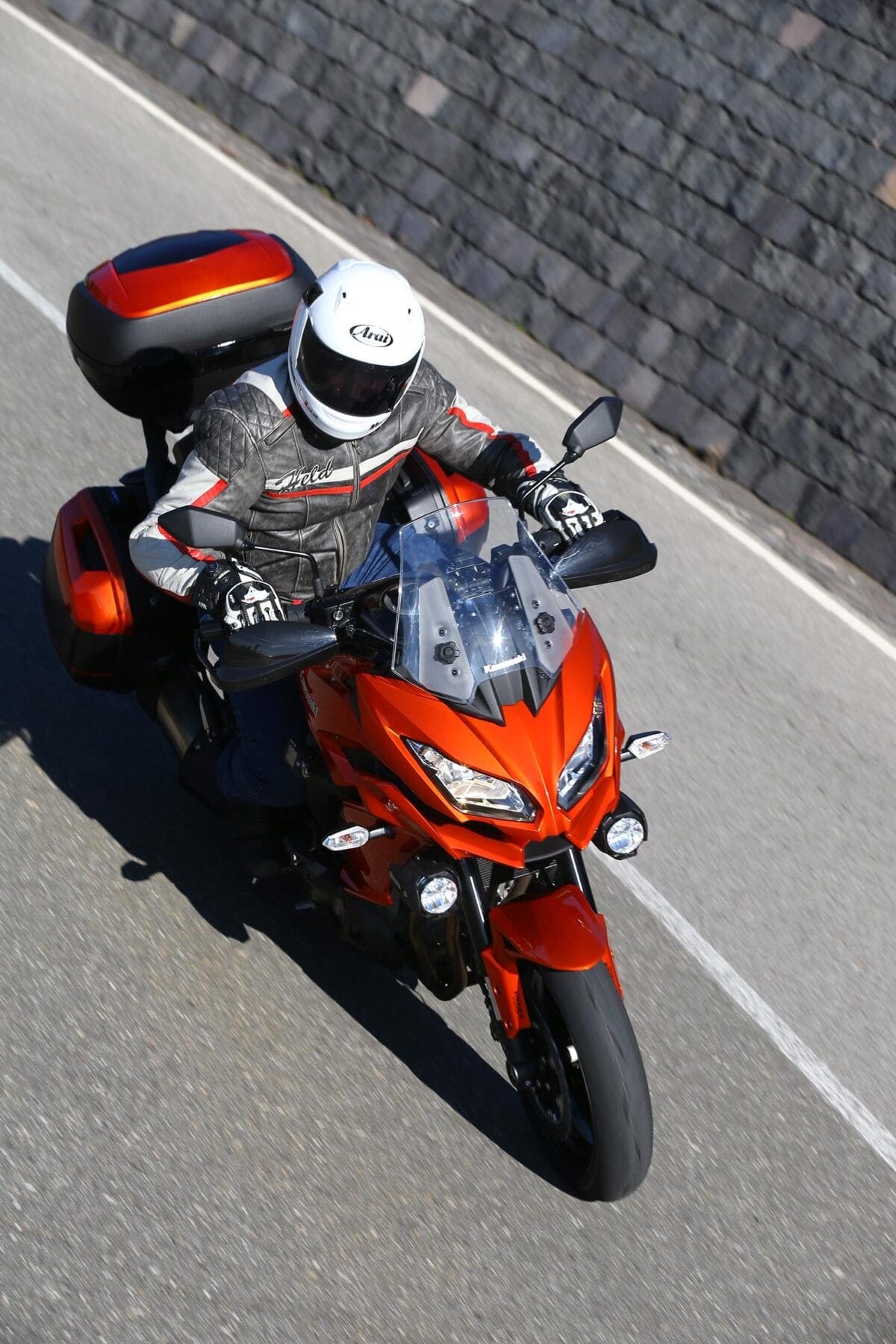 There are three versions of the Versys 1000 available (each in white, black or orange): the standard model at £9749; the Tourer, which includes panniers (with liner bags) and hand-guards at £10,399; and the Grand Tourer, with a top-box as well as the panniers, hand-guards, front driving lamps, a gear position sensor, 12V power outlet and engine guards at £11,099. 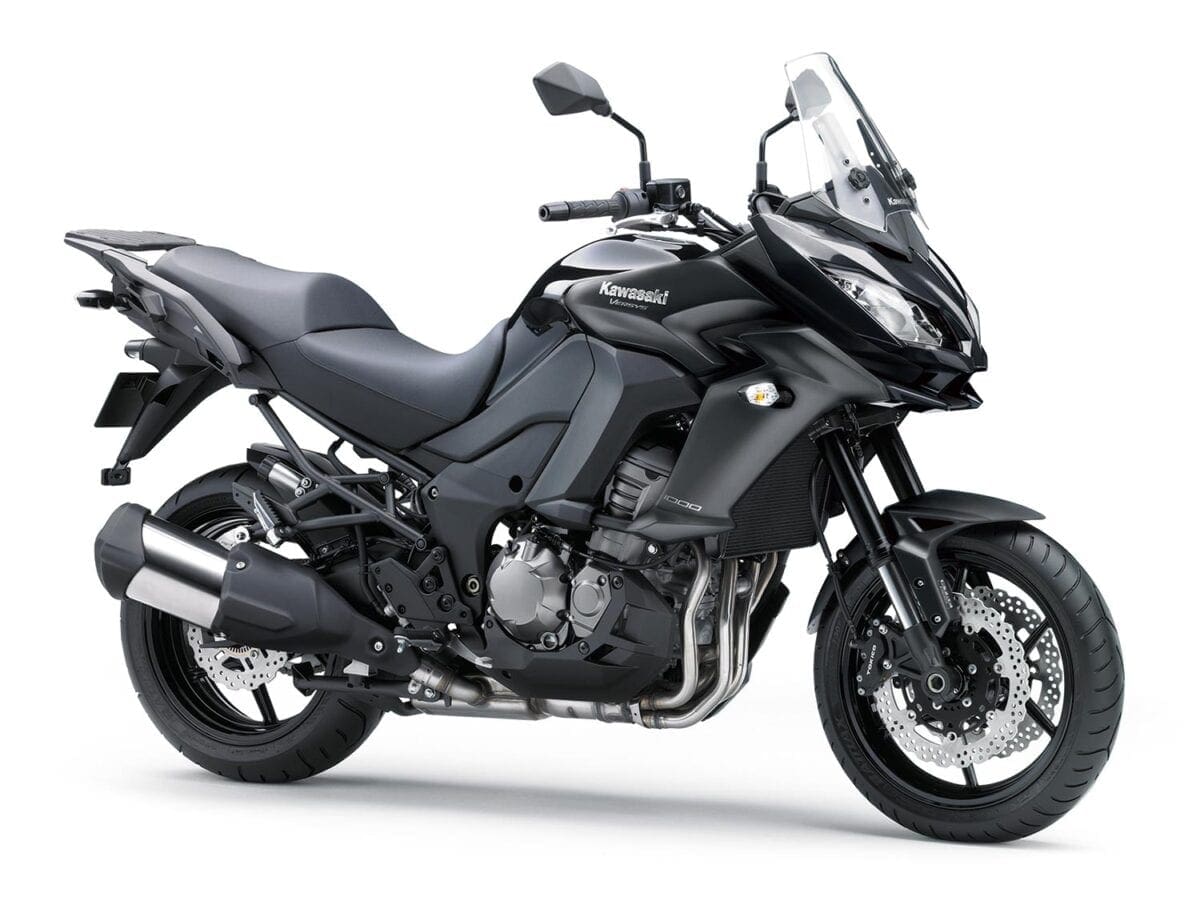 During an interview, Kawasaki Motor Europe’s Product Planning Manager Tsuyoshi Shibata told me that the typical Versys 1000 customer is an experienced rider who’s owned superbikes, but become fed-up with speed-traps and traffic. They want a bike that can tour in comfort, but still gives them the buzz a sportsbike used to… and that’s exactly what the new Versys 1000 does.

It looks great – shaking off the functional design of the previous model – it’s got great luggage capacity, it’s not bulky like a full-blown tourer and it’s got a superb, upright riding position. Be honest about what kind of riding you’re going to do – will you really be taking your bike across the Sahara? If not, and you want something fun, practical, fast, capable and easy to ride then yes, you most certainly should buy one. 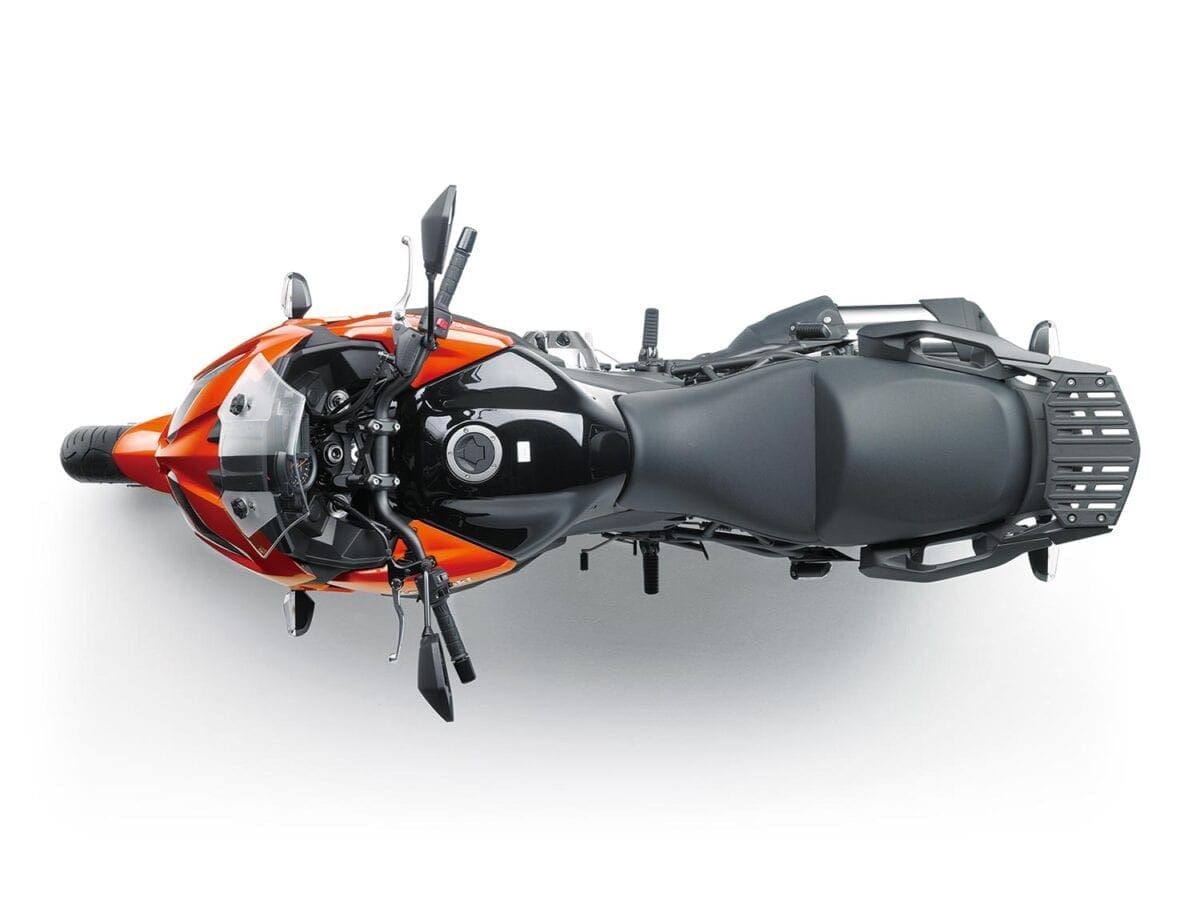 For the past year, I’ve been riding Kawasaki’s brilliant Sports Tourer – the Z1000SX. In many ways, the Versys 1000 feels familiar, from the switchgear and traction control, to the fantastic surge offered by the litre motor. Despite making about 20bhp less, not once in the 100mile test-ride up and around Mt Etna did I find myself wishing for more grunt.

That’s not to say it’s too powerful. I’ll admit to getting a bit nervous a few times on the ride but I’d have been the same on any bike – snow clinging to the kerb, salt glistening on the roads like ice, clumps of leaves and piles of volcanic ash saw me gradually backing off, but I needn’t have worried. As with the SX, the ABS and traction control do an excellent job of keeping everything in line, and when the roads cleared and the sun was free to burn away any trace of fear, I found myself getting back into the groove, taking advantage of the wide bars to nip round tight hairpins, through crazy Sicilian traffic, and flip between the rolling corners of the lava fields. 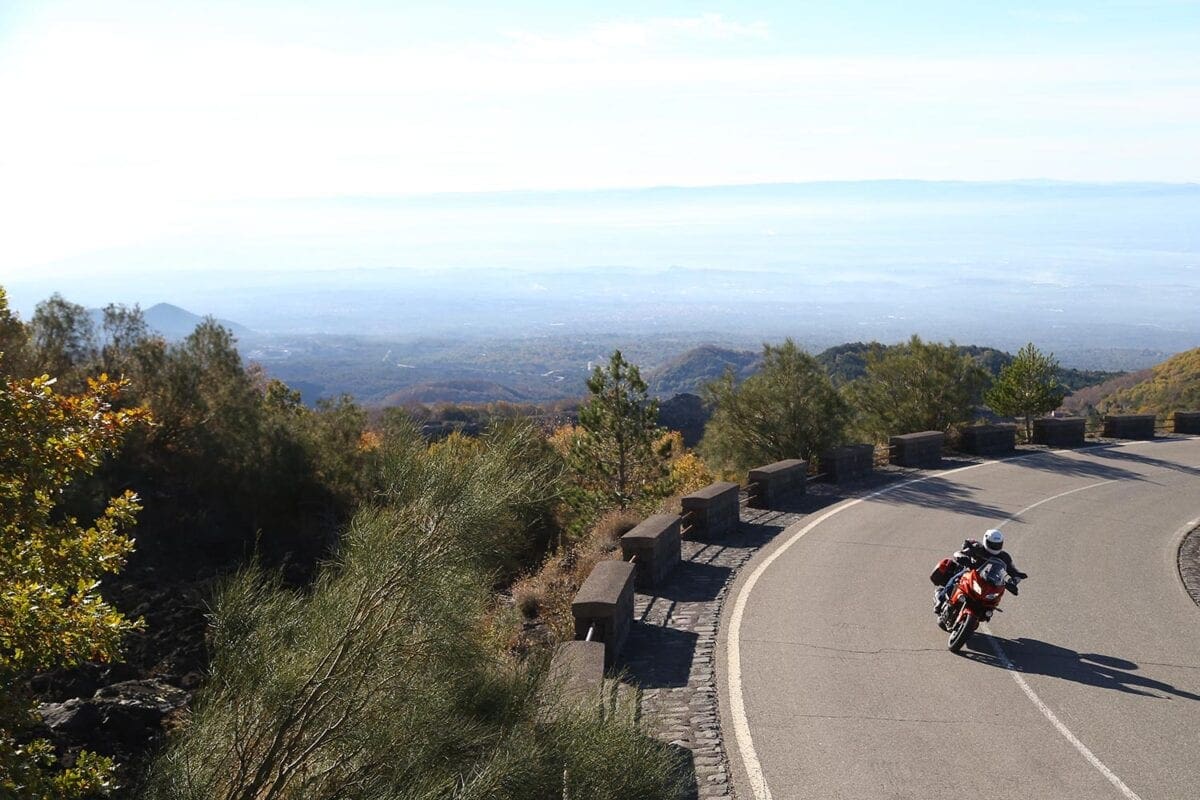 It’s easy to switch to the Low power mode whilst riding, but there’s rarely much point – from about 2000rpm the engine pulls smoothly and easily, with little need to go far past 5000rpm for most riding. However, at 6000rpm the machine starts to remember its superbike roots, and by the peak at 7500rpm, up to the 10,000rpm redline, any pretence of a gentle ride is chewed up and spat out with the distinctive – and addictive – Kawasaki induction howl. Overtaking is fast, safe, and sure to put a massive smile on your face.

By the end of the ride I’d averaged 44mpg – not bad considering the aggressive riding of a press launch. A typical long-distance tour would see this improve, but still the 4.6gallon tank gave me a range of just over 200 miles. With the effective (and easily adjustable) windshield keeping my 5’11” frame well protected, there should be little problem covering that kind of mileage between stops. 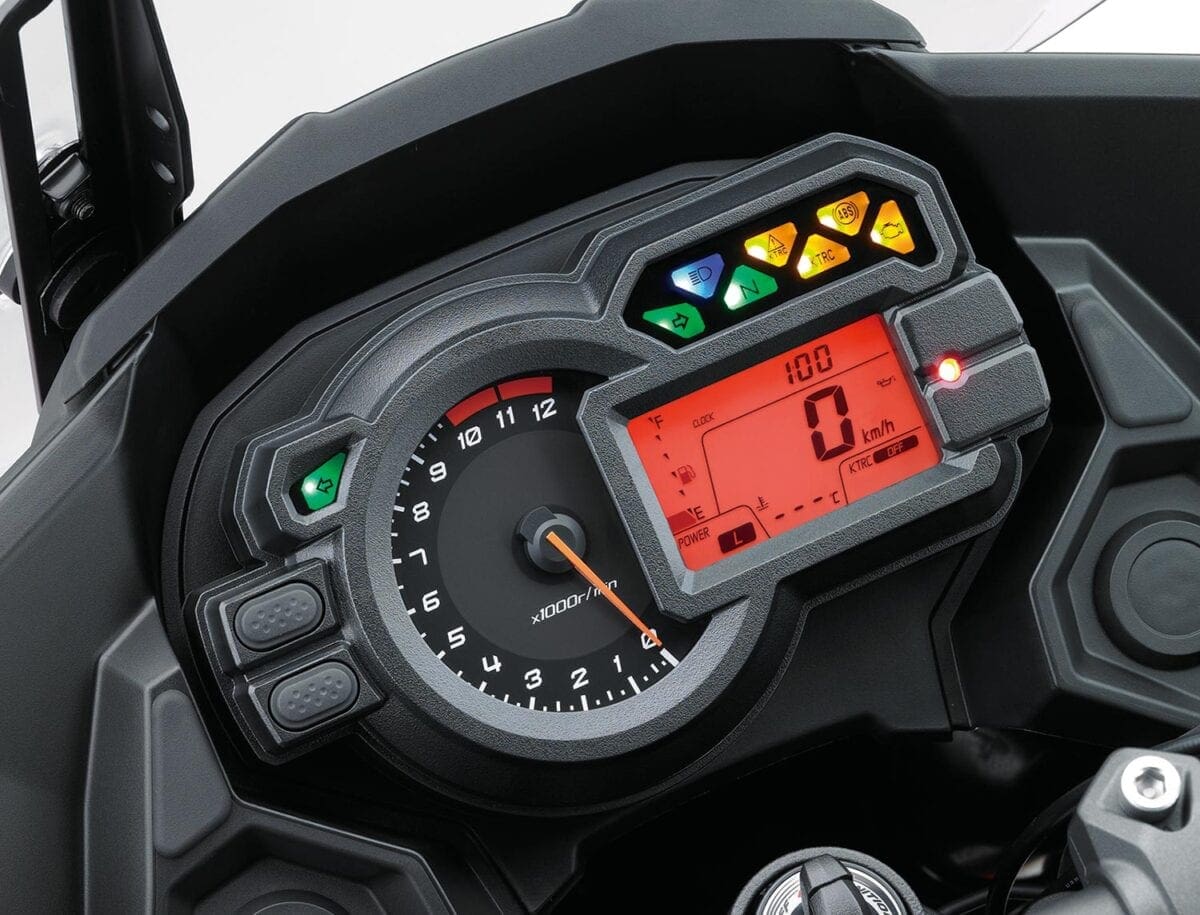 The suspension can smooth out some pretty bad roads, but it’s not too soft. While I didn’t find myself able to brake quite as late or deep into a corner as I would on the Z1000SX, the Versys is still well settled, and easy to control with a touch of back brake if you find yourself going a little too fast in a bend. While the front brakes have a good level of initial bite, scrubbing off higher speeds does make you a little more aware of the machine’s mass – it’s 20kg heavier than the SX, and doesn’t benefit from monobloc, radially-mounted calipers. I found adding a click to the brake lever’s span adjustment gave a more confident feel, and stopped the lever touching my fingers.

With all the excitement around the H2R, the Versys 1000 could easily be missed, but it’s a real treasure just waiting to be discovered. The engine is great in the Z1000SX, and in the Versys 1000 it’s absolutely perfect. If the Versys isn’t an Adventure bike, and the Zed is Kawasaki’s great ‘Sports Tourer’, then this could be the perfect ‘Sporty Tourer’ – a comfortable, capable long-distance machine with the grunt to remind you why bikes are so bloody brilliant. 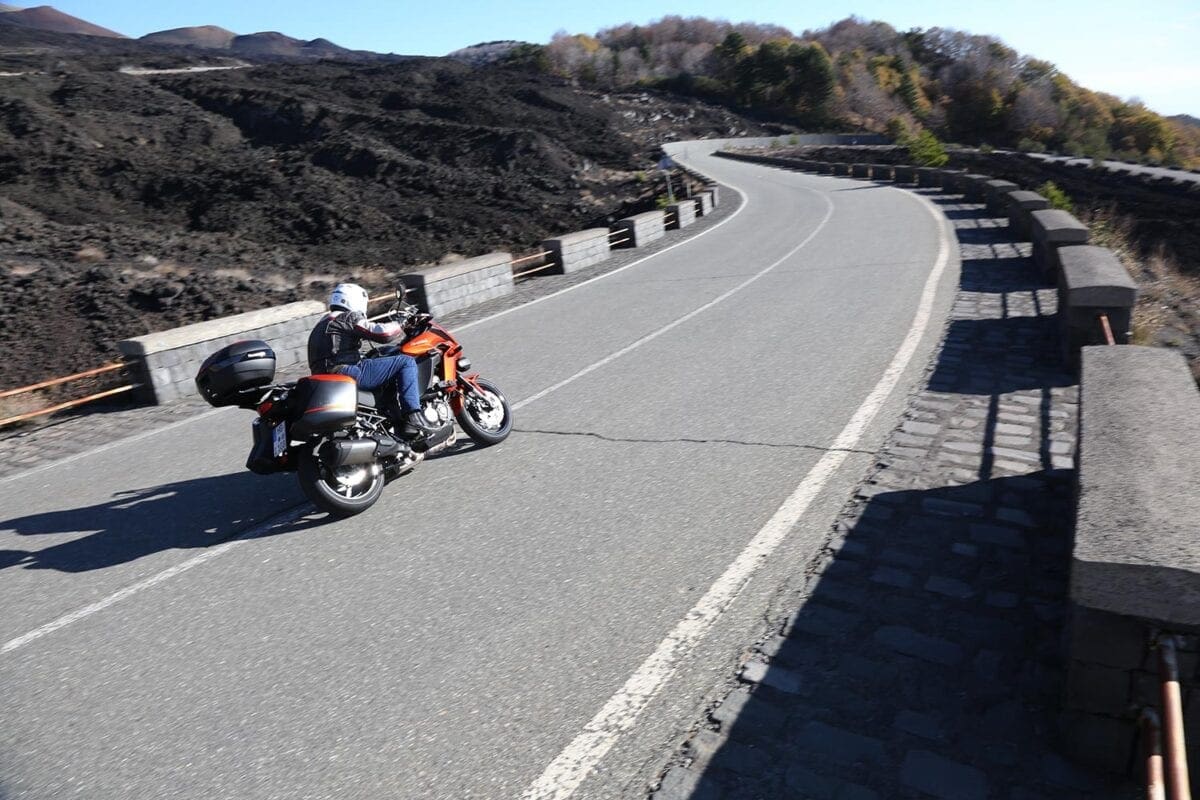