TT 2017: Dunlop and Hutchinson kick things off with 125mph+ laps 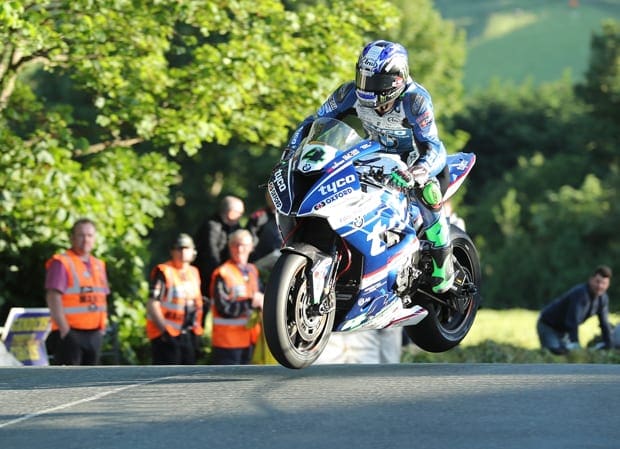 After a frustrating start to the week for the 2017 Isle of Man TT Races fueled by Monster Energy, qualifying finally got underway on Tuesday evening and last year’s headline makers – Ian Hutchinson and Michael Dunlop – immediately took up where they left off last year,  setting the pace with 125mph+ laps.

Intermittent afternoon rain resulted in a number of damp patches around the 37.73-mile course, most notably at Greeba, on the approach to Glen Helen and in Governor’s Dip, but conditions were otherwise good with bright sunshine and blue skies at the start and finish of the session. It was a prompt start too as the three newcomers – Adam McLean, Paul Jordan and Joey Thompson – headed off down Glencrutchery Road slightly before the 6.20pm start.

After the sidecar newcomers left the line for their speed controlled lap, there was a slight gap before the session proper fired into life with Bruce Anstey on the Padgetts Honda first away just before 6.35pm with James Hillier, Ian Hutchinson, Josh Brookes and Lee Johnston on their Supersport mounts following the Kiwi rider down Glencrutchery Road.

Ivan Lintin, Peter Hickman and Michael Rutter were also among the early starters on their Lightweight machines whilst the returning Guy Martin set off slightly later on his Supersport Honda as he got his first taste of the Mountain Course on closed roads since the 2015 PokerStars Senior TT.

Hutchinson, on the McAMS Yamaha, was first to complete a lap at 118.845mph with Michael Dunlop second across the line and quickest on the opening lap of TT2017 at 120.371mph. Gary Johnson was also above the 120mph mark at 120.311mph, just over half a second slower than Dunlop.

Rutter was quickest in the Lightweight class with a speed of 113.946 on the Paton from Lintin (113.856) with Dan Cooper, Hickman and Stefano Bonetti all inside the 111mph lap barrier.

At 7.10pm it was the turn of the 1000cc machines with David Johnson first away on the Norton.  The Aussie hasn’t got a Supersport bike at his disposal so waited slightly longer than other riders for his first laps of 2017.

Steve Mercer lapped at 120.906mph with Hillier (120.986) and Rutter (120.986) slightly quicker but it was that man Dunlop who was laying an early marker down on the Bennetts Suzuki and a speed of 125.680mph sent him comfortably to the top of the leaderboard.

There were changes later in the session though and although Dunlop broke the 125mph barrier once more, Hutchinson took the first night honours with the fastest lap on the night with a speed of 125.839mph. Hickman (124.093) jumped up to fourth although Rutter’s lap of 124.117mph made him quickest in the Superstock class from Anstey (123.722).

Harrison looked like he would make a significant impression but he retired at the Mountain Box whilst Martin broke the 120mph barrier with a speed of (120.018).

Just after 8pm it was the turn of the F2 Sidecars and it was local heroes Dave Molyneux/Dan Sayle who set the pace with a lap of 110.913mph, which was just quicker than Pete Founds/Jevan Walmsley (110.427). An impressive lap came from Tim Reeves with newcomer passenger Mark Wilkes, the duo lapping at 109.719mph to go third quickest.

John Holden/Lee Cain retired at Westwood with Alan Founds/Jake Lowther out at Ballacraine but Molyneux/Sayle were having no such problems and on their second lap they upped their pace considerably to lap at 113.641mph. Conrad Harrison, with new passenger Andy Winkle, also improved on their first lap speed with 107.458mph second time around.

That placed them sixth quickest behind Steve and Matty Ramsden (107.991) and ahead of Gary Knight/Dan Evanson (106.563) but the Birchall brothers overhauled both Founds and Reeves to go second quickest with a lap of 110.917mph.

To complete a dominant night, Molyneux/Sayle then went quicker still on their third and final lap with a speed of 114.090mph.