According to Carmelo Ezpeleta, he and Valentino have something in common – they’re both passionate about what they do. 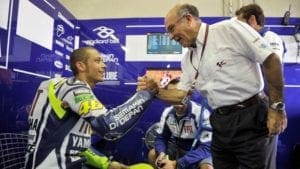 In an interview with Motociclismo.es, Carmelo Ezpeleta said: “Valentino has played a vital role in the development of the Championship. He’s been here longer than anyone. I always say that the most important thing is that he is an exceptional driver – and if he wasn’t, he wouldn’t have much value.”

For Ezpeleta one of Rossi’s strengths is that he loves what he does: “I am already 71 years old and the population at my age is usually retired. I like to be here. As long as I’m effective and the people of the company believe it, I will continue here. Something similar happens to Valentino. He likes to be here and he is also competitive. He’s here because his team thinks it’s appropriate, because his friends think he’s perfect, and because he feels that way too.”

Ezpeleta went on to acknowledge everything that the Italian has done for the World Cup, saying: “From the point of view of organiser of the Championship, if there is a person I have to thank, it’s Valentino. Why does a pilot of his age ride enduro before the Misano GP? Because, he wants to be fit and prepared. Ok, so he got injured – but he missed only one GP before reappearing in Aragón. Why? Because he does what he likes and because he believes he can do it. Even his most ruthless rivals have to recognize Valentino. He is special”.