Everyone has their own slightly different opinion about what it is that defines an adventure motorcycle. For some riders, an adventure simply involves a long slog on the motorway broken up by a couple of tame trails, but for others it means standing on the pegs for hours at a time churning up mud at every opportunity. KTM’s 390 Adventure can do both. 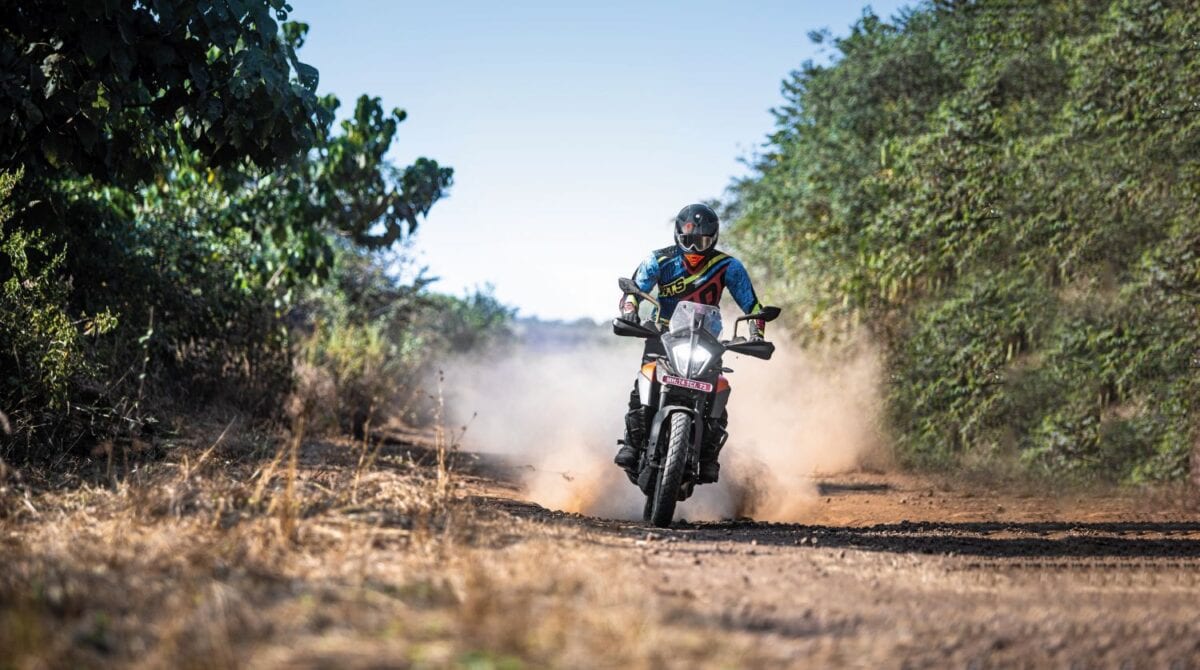 When I finally jumped on the saddle, it made me feel like I was riding a proper middle-weight. The seat height is quite tall at 855mm, but fret not; the suspension has enough sag so as to allow you to get your feet on the ground after you sit on the wide and plush seat. The cockpit is snazzy too, and never does it feel like a budget bike. We have always loved the TFT cluster on the 390 Duke, but the Adventure takes it a step ahead. You now get navigation as standard (works with the KTM My Ride app). That’s not it; there’s a bi-directional quickshifter, IMU-based cornering ABS and traction control, extendable windshield (by up to 40mm), full-sized serrated pegs, Metzeler Tourance tyres (also seen on the Tiger 800 XRs and G 310 GS), and top-spec WP Apex long-travel suspension (170:177mm, front/rear). KTM have also plonked in two fans for the radiator to cool down better in off-road riding conditions.

What’s been carried over from the Duke is the same liquid-cooled, 373.2cc, high-compression motor in an identical tune, tightly tucked into the trellis that also gets a detachable rear subframe. The riding position is slightly canted forward and the pegs are mid-set. The commanding seating position is great for riding while seated, but standing? Nope. It’s a bit of a disappointment. There are no tank recesses to hold on to and the handlebar is low as well, at least for my height (6ft). And as we began the ride and hit the gravel, the engine showed its weakness. A lack of lowdown grunt means the clutch takes a hit and you need to keep the engine above 4,000rpm to keep it moving, which helps make power slides child’s play. The traction control was acting up though, and had a mind of its own, which led to a lot of falling (though KTM say it will be sorted with a software update). But what really impressed me is the way the chassis tackled tricky trails. Riding up a dried-up waterfall, the 390 Adventure managed to sail through – thanks to its lightweight and well-balanced chassis. Nowhere did it bottom out and nothing broke. Not many ADVs would be as robust. Limited time meant we had to get on to the road, where the KTM really shines. 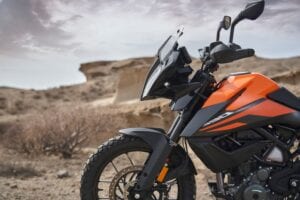 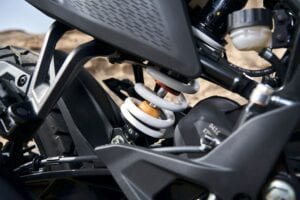 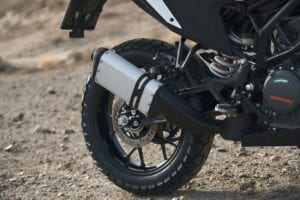 The riding position is extremely comfortable and just about perfect for long-distance riding – and the ride and handling are the icing on the cake. Despite the additional weight and long wheelbase, its agility is second-to-none. I actually reckon its handling is better than the Duke. The grip from the Metzeler Tourance tyres is ample and the faster you go, the better they get.

Just like the Dukes, the 390 Adventure is clearly inspired by its elder and more experienced siblings, including the ones that have won the Dakar rally for 18 years in a row. The idea has remained unadulterated in the 390. The sheer size of the 390 Adventure will make you feel like you are riding a proper ADV, and none of the small-capacity ADVs can boast of such a feat. In fact, when I saw it stood next to the 790 Adventure, there wasn’t much in it.

And boy oh boy, it is good! There’s a reason why 390 Duke owners have been playing around with the bike’s suspension and plonking on windshields, because it is great for long rides. The 390 Adventure gets all of this, and more. It’s so very potent on the highway and even up the mountain twisties you’ll be able to easily keep up with those big, burly ADVs. I can stick my neck out and say that in real world conditions, it’ll even keep up with some mid-weight nakeds and lead the pack over potholed B-roads. The motor is stupendous and it’s a joy to skim through the creamy, torque delivery. The top-end is super aggressive as we have already sampled on the Duke, but the quickshifter adds to the overall experience, making it enjoyable to ride at high speeds. 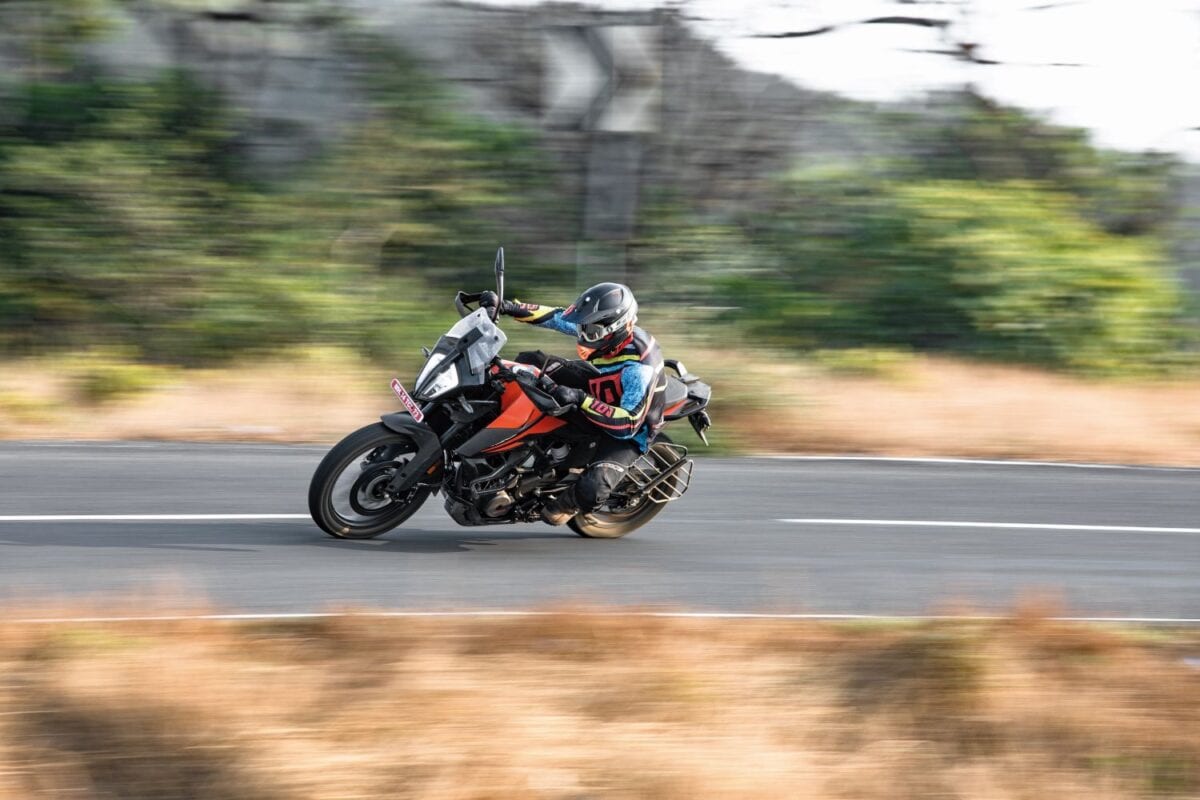 What makes the perfect mini-adventurer? To me it’s one that can do it all – cruise effortlessly on motorways; keep you comfortable on crowded city streets; take on the potholed B-roads; get your knee down on twisties; and make you feel at home in the dirt. The 390 Adventure does all that. It may be lacking the ideal ADV essentials for some – including spoked wheels and a beak – but having ridden it on some fairly tasty trails, I can assure you that you you’re not missing anything; except for a bit of torque in the low-range. Tinkering with the sprockets might change that. But either way, I can’t think of another motorcycle in the world which offers so much value in a no-compromise package.