Three-wheeled vehicles have some peculiar licencing requirements. You’d probably think that you’re obliged to pass a motorcycle test if you’re riding something that leans from side to side. But you’d be wrong. It all depends. If the front wheels are more than 460mm apart it is legally classified as a tricycle; meaning you can ride it if you’re over 21 and hold a ‘B’ car licence. That’s the case for Yamaha’s latest leaning multi-wheeler, the Tricity 300. 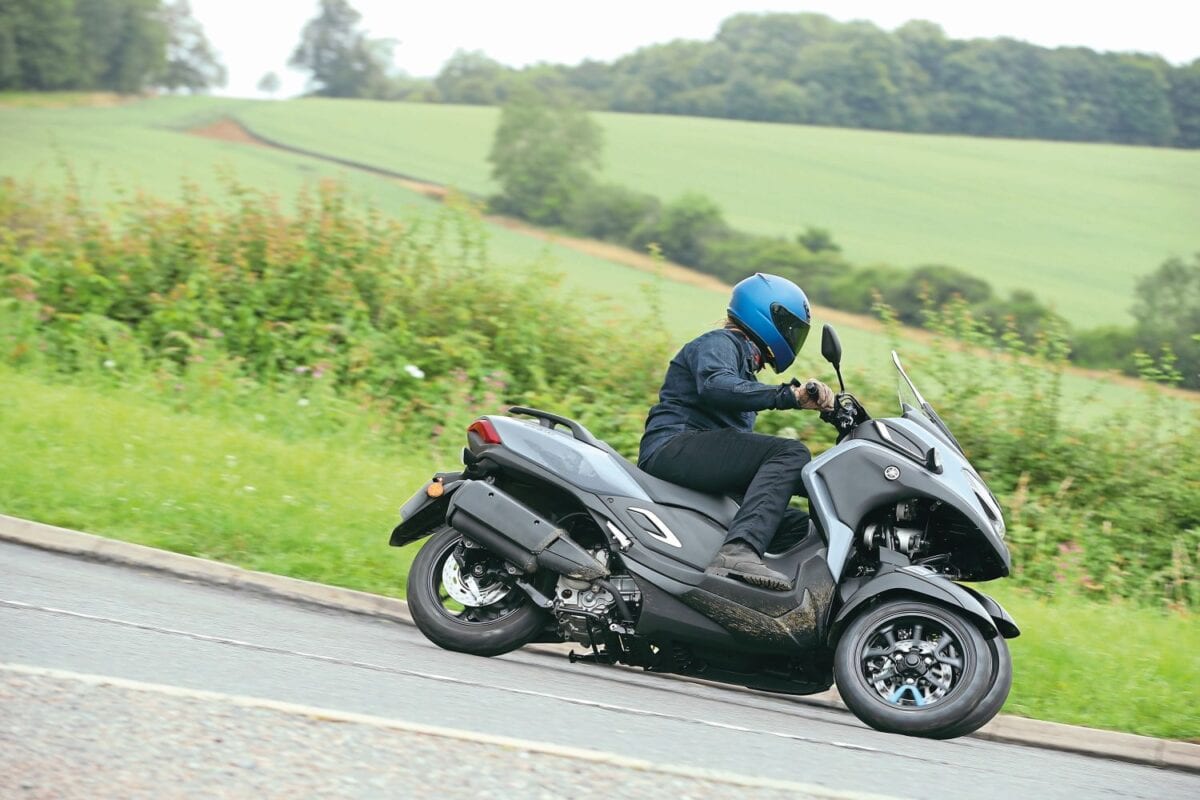 Of course, that means there’s a potentially massive audience that could be tempted to swap four wheels for three, and swing their leg over this thing each morning to head into work. That’s what Yamaha think anyway. If you’ve never ridden a motorcycle or scooter before, the first thing you’ll notice will be the size of the thing. It’s a big scooter – tall, wide and heavy; but somehow, not ungainly. I’m 6 foot and a bit and had no problems getting my feet flat on the floor and moving it around. If you’re a little shorter and can’t reach, don’t worry. Yamaha’s come up with a clever bit of technology that’s as simple as it is brilliant. The ‘Standing Assist’ feature allows you to lock the leaning system up front as you’re coming to a halt. Only available at speeds below 6mph, all you’ve got to do to activate it is tap a button on the left hand switchgear. Easy. And when you want to get moving and leaning again, just open the throttle or double tap the button. It’s a clever bit of kit that takes a little a bit of getting used to – but there’s no doubt it works well. If you’re suited and booted on your way to a meeting, it means you won’t have to dirty your shoes when you come to a standstill… that’s got to appeal to commuters.

Its engine has been nicked directly from Yamaha’s XMAX 300. The Tricity does weigh a whopping 60kg more though (239kg in total), which means the 292cc, four-valve, water-cooled, single has a got a bit more work on its hands than it’s used to. But twist-open the throttle and away you’ll go… Its 28bhp and 21ft-lb of torque will allow you to cruise comfortably at motorway speeds (and reach a top speed of around 85mph). It’s quick enough of the line, and will comfortably overtake slower moving traffic – but it’s no rocketship. It doesn’t need to be though, it’s smooth and predictable.

Braking on the Tricity 300 is reassuringly easy too. Like a normal scooter (or even a pushbike), there’s a lever on each handlebar. Typically the left side operates the rear brake and the right side operates the front. That’s the case here, but the left hand lever also activates the front and rear brakes together. There’s also a foot brake (it’s a legal requirement) which does exactly the same – squeezing the 267mm discs on each wheel. I wasn’t hugely impressed by the foot brake. It’s intended to be used when you’re stretched out using the front footboard – allowing you to brakes with your heel. I couldn’t get on with it at all, maybe my feet are too big or it’s awkwardly positioned, but I struggled to confidently stop without having to grab a handful of front lever at the last minute. Oh and there’s a parking brake too – like a car handbrake – to make parking the automatic three-wheeler on hills a cinch. 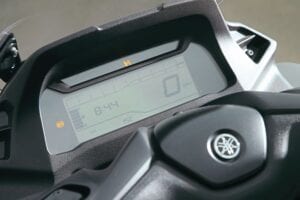 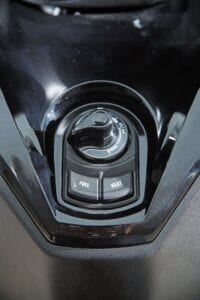 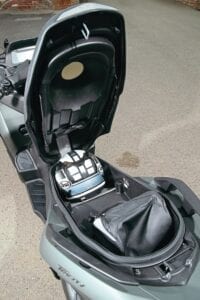 The real question is how the thing handles… the answer, surprisingly well. If you’re making the transition from a scooter, it’s going to a feel a little different up front. A little heavier, a little vaguer, but there’s no doubt the two front wheels help to inspire confidence for the less experienced rider. It’ll hustle along nicely on faster stretches of road, remaining remarkably untroubled by potholes and white lines – even in the wet.

Its suspension does a decent job soaking up bumps and lumps in the road, helping to offer a comfortable ride. The front setup’s particularly interesting. The two wheels are independently sprung, so if one wheel hits a bump the other one won’t feel it. I kept trying to catch it out by barrelling through potholes – but held its line admirably. There’s a twin shock setup at the rear. It’s not exactly sophisticated, but it does a nice enough job.

In town the Tricity is a doddle to ride. At low speeds it’s impressively stable – thanks mostly to those two wheels up front – which makes picking your way through traffic a cinch. One criticism of three wheelers by the general scooter and motorcycle riding public is that they’re too wide to filter on. That’s not the case here. It might look pretty chunky, but it’s actually only 4cm wider than its XMAX 300 counterpart.

It’s comfortable too. We didn’t spend more than a couple of hours in the saddle at any one time – but the well-padded seat proved more than up to the task, the windscreen and bodywork helped to keep off the worst of the wet weather and I found there was plenty of legroom too. I’d have no qualms covering a few hundred miles on the thing in a single stint. And you won’t have to fill up too often to make that happen. The Tricity returned 80mpg in spite of our spirited riding. I reckon a more relaxed pace would allow for 90mpg – which means you’d get over 250 miles from its 13-litre tank. That’s not bad. 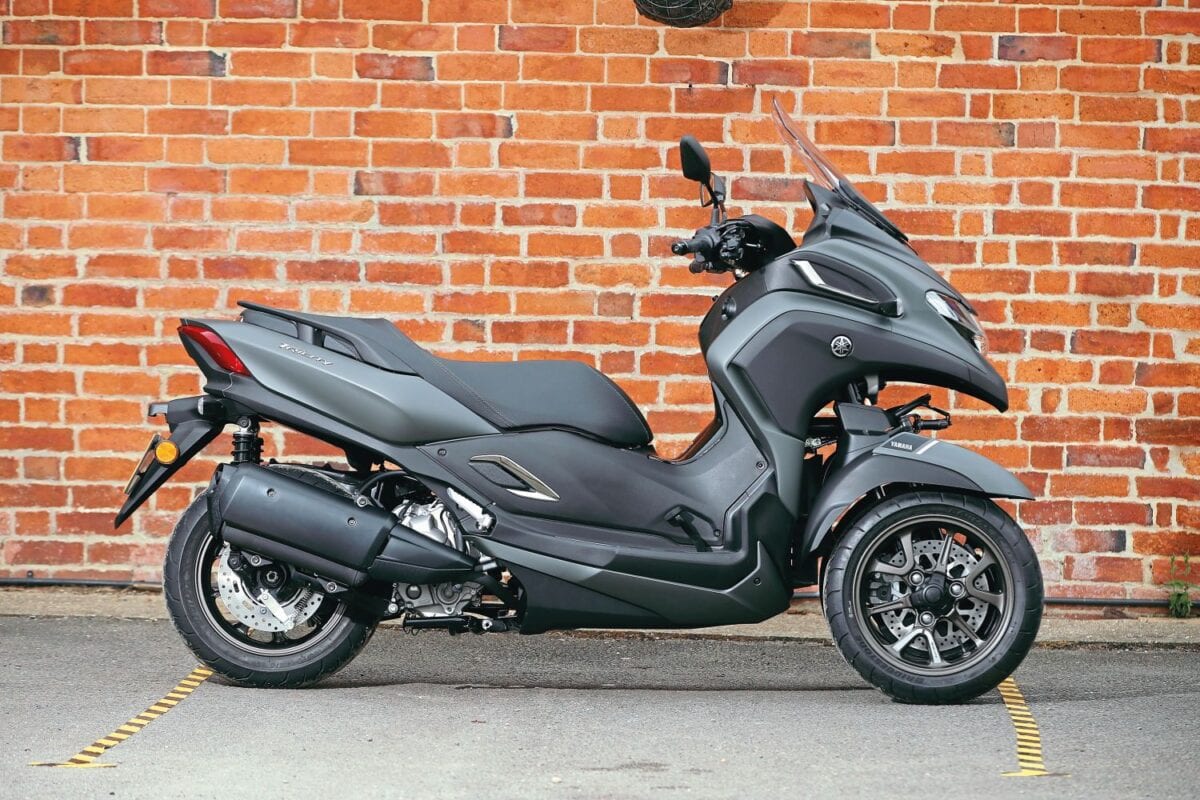 Another important element of a scooter is its storage. The Tricity’s got plenty of that. Under the seat there’s space for a couple of lids – which means there’s a certain amount of flexibility about what you can keep in there. I’d opt for a set of a spare lid, a set of waterproofs and a lock. It also gets a keyless ignition, a centre-stand and a 12-volt lighter-style power socket. Ok, it’s not exactly dripping with kit – and as it’s a premium machine predominantly aimed at drivers, you’d maybe expect a few more gadgets. Some USB sockets or Bluetooth connectivity wouldn’t go a miss, nor would a full colour dash. It’s not the end of the world though, it’s got everything you’d need to commute.

There’s a lot to love about the Tricity 300, even if you’re already a fan of two-wheeled travel. But that’s not really who Yamaha’s aiming at. It’s played a clever move by allowing car licence holders to get their hands on one – and swap commuting by public transport or a car for the convenience of a scooter. It’s agile, easy to ride, nicely-finished and is just as happy bobbing around cars as it is bombing down B-roads. If you don’t believe me, get along to your closest dealer and try one out. I’m sure you’ll be pleasantly surprised. I know I was.