How to get more mpg – your guide to fuel efficiency 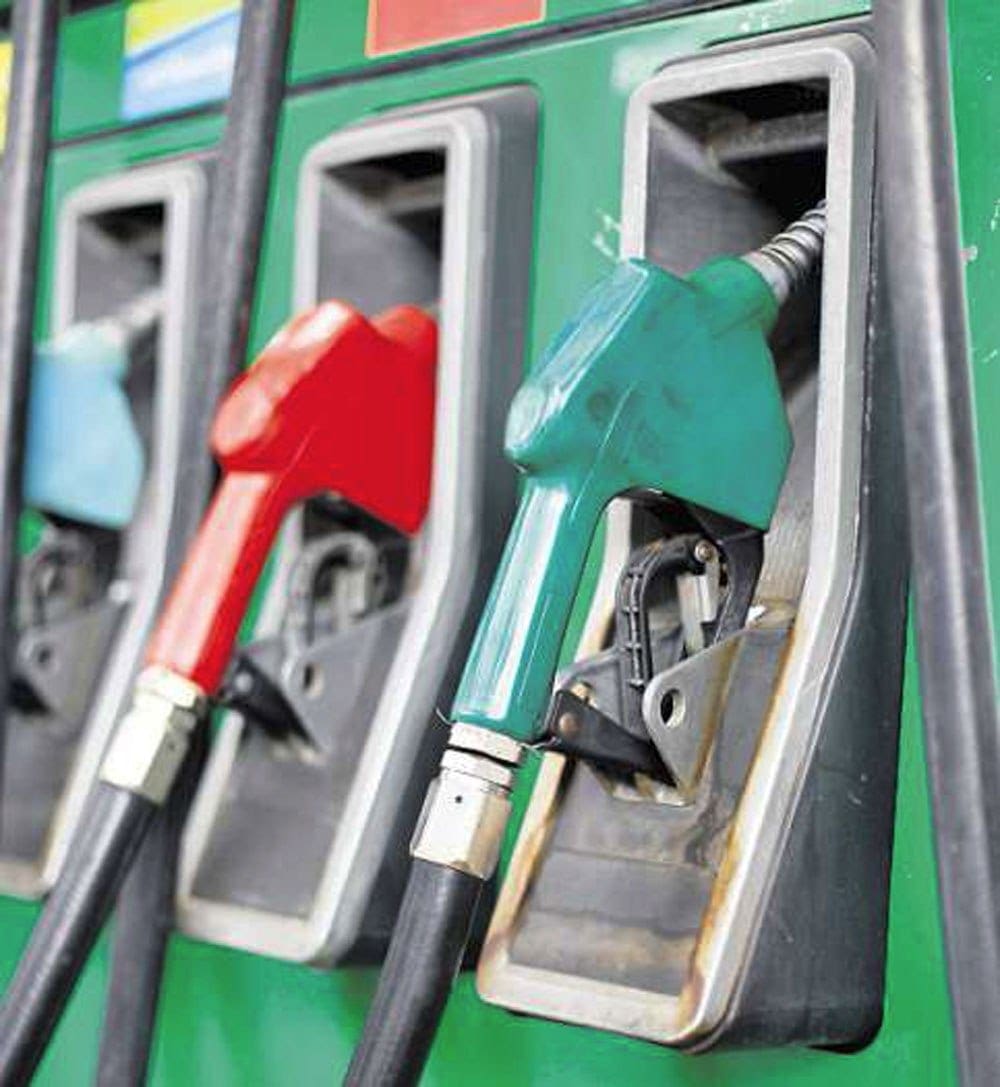 With soaring petrol prices, there are many ways to get the most out of your miles per gallon…

How to increase your overall fuel economy
Even if you think your mpg is good, there are still ways of improving your bike’s fuel efficiency per mile.
■ This may be boring, but changes in how you ride your bike will pay dividends. Smooth, fluid, nonaggressive riding with no hard braking or rapid acceleration will all boost your average mpg. Also, watch your speed. Staying at or a little below the speed limit, and maintaining a constant speed where possible, will all help as the opposite will force your engine to work harder than it needs to, and in turn, make it use more fuel.
■ If you can, try and plan your route in advance: continuous, smooth riding on uncongested routes is normally more economical, even if they are a bit longer. The fewer the number of speed bumps, traffic lights etc, the better. Switch off the engine when at a big set of lights, level crossings or roadwork stop signs. If you’re only going on a short journey, be aware that a cold engine will use more fuel than a warm one.
■ Keep a log of your mileage and fuel consumption. By doing so you can monitor fuel economy and riding habits, and what effect different riding styles have on your mpg. You can then measure the direct results of making any riding style changes – averaging this over a number of fill-ups will make the results more accurate. Once you have a good grasp of your ‘normal’ expected mpg, any major deviation to this figure can also act as an early warning to any bike maintenance issues that may be looming.
■ Maintain your bike properly. Regular fluid checks, servicing and repairing any mechanical problems promptly will all help keep your bike’s engine running as efficiently as possible. Replace old/dirty air filters: if an engine is being starved of air it will work harder than usual.
■ Maintain correct tyre pressures (make sure you know them by looking them up in the owner’s manual or ask your local dealer). Under-inflated tyres will reduce fuel economy due to the tyre’s increased contact patch, which adds more resistance. It will also have a negative effect on steering and handling. Carry a small tyre gauge, as most petrol station ones are inaccurate.
■ Get rid of any accessories on your bike that you are not using, such as panniers, tank bags etc: these stick out, increase wind resistance/drag and add weight, decreasing petrol consumption. Loose-fitting clothing also hinders overall aerodynamics by flapping around and can also be dangerous or distracting.

Find the cheapest petrol
The easiest way to find the cheapest forecourt in your area for fuel is by using the free website www.petrolprices.com Enter your postcode and the site will tell you how many petrol stations are within a given radius (normally 10 miles). Register for free on the site and it will then give you access to advanced search criteria, like how far you’re willing to travel for cheap fuel, and it will list that day’s cheapest station forecourts, where they are and directions to them. Well worth it to save some serious cash, especially if you’re travelling on motorways and want to avoid the ripoff prices at their services.
■ Try and fill up again before going onto reserve. This way you won’t panic and just fill up anywhere, as you’ll have time to get to a cheaper petrol station.
■ Filling up at night/when it’s cold is a bit of an urban myth as the differences are tiny, but petrol pumps are calibrated by volume, and therefore you should get a tiny extra amount this way as temperatures drop.

Buy fuel the cheapest way
Buying fuel is easily the biggest single regular outgoing that most households face (e.g. £20 per week in one bike equates to just over £1000 a year, let alone how much fuel you put in other vehicles you may own). But you can make savings simply by the way you pay for your fuel. ■ Some credit card reward schemes operate a cash back system that pays you back each time you use their card. Use this to buy all your fuel and then make sure you set up a monthly direct debit to pay the card off in full, on time every month. This way there’s no interest charged and you get back some extra funds. Shop around for the credit cards offering the best cash back rates. ■ Regular supermarket petrol promotions are also worthwhile taking advantage of. They’re usually cheaper than the normal petrol stations like BP and Shell anyway, and the promotions are usually in the formof coupons that give you five pence off a litre of fuel when you spend £50 or more in store.

Petrol prices
It looks as if high fuel prices are here to stay. On 1 January this year, there was a 0.76p increase in fuel tax, bringing the duty rate for most road fuels up to a whopping £58.95 per litre. Add this to the 2.5% hike in VAT up to 20% and it’s not hard to see why fuel prices are currently sky-high. Most people consider the existing price breakdown for a litre of petrol unfair, as in effect, through the duty and the VAT rate, bikers and drivers are getting taxed twice at the pump. Here’s what you are actually paying for, based on an example of £126.9 per unleaded litre: 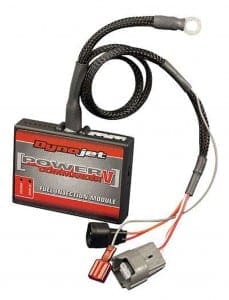 How can fuelling devices help my bike?

What about fuelling devices?
Fuelling devices such as Power Commanders can sort out any fuel injection issues your bike has, and offer tailor-made fuelling maps based on how you ride, e.g. a ‘touring’ or ‘economy’ maps are common. If your bike’s fuelling is optimised in this way, it can make your bike run more efficiently and get the most from its performance.

What benefits are there?
A standard bike’s fuelling is a compromise between achieving performance and passing the emissions and noise testing regulations. To pass the regs, engines tend to run on the lean side of stoichiometric at the point at which they’re tested (typically 5000- 6000rpm, which is why most dyno curves have a midrange dip). By running lean, the air/fuel ration isn’t optimised for best performance.
A fuelling device can be used to change this ratio by either intercepting and modifying the fuelling signals fromthe bike’s ECUor by reprogramming the ECU itself. Most of these devices come with a map that may or may not suit your particular bike and its state of tune/exhaust fitted. Every single bike is slightly different due to production tolerances. The best solution is to have your fuelling device set upon a rolling road dyno, as then it will be perfect for your bike.

Modified bikes aside, a standard bike’s fuelling can noticeably benefit by way of a crisper throttle response and smoother power delivery. Bikes with poor fuel injection that suffer from a snatchy throttle response can often be vastly improved.

It will also improve the power in the area where a bike is noise tested – typically that midrange dip. Part throttle is by far the most important area to improve, as this is where a rider typically spends 95% of their time while riding.

What about dynos?
A skilled dyno operator can make different, bespoke maps based on your personal riding style and use. These can include an economy map (slightly leaning off the fuel ratio at typical cruising revs and throttle openings), one for a standard, bafflein can, or an aftermarket, baffle-out pipe (slightly richer).

What’s individual cylinder mapping? Modern four-cylinder sportsbikes have eight fuel injectors. There are two per cylinder (one in the inlet port and the other higher up in the airbox for top end power). Most aftermarket fuel injection control units can now map all eight injectors, either as standard or via an optional control unit. The benefit is that each cylinder’s fuelling requirements can be individually optimised, and also tailored for all gears. It’s also worth noting that while four-cylinder bikes don’t often have noticeable differences between their cylinders, V-twins do as their rear cylinders run hotter and so often need more fuel than the front.

What is an O2 sensor?
O2 sensors help determine in realtime, if the air/fuel ratio is rich or lean. The sensor is mounted in the exhaust upstream and, simply put, measures the amount of oxygen in the exhaust gas. This information is sent to the ECU, which then increases or decreases the amount of fuel injected into the engine, until the ratio of air to fuel is as desired. This ratio is typically 14.7:1, or stoichiometric (where all of the fuel is burned), which is a good compromise between performance and economy.

What is standard closedloop mode?
A closed-loop feedback system varies fuel injector output according to the O2 sensors’ real-time information rather than using a predetermined fuelling map (known as open-loop). Closed-loop mode means the ECU will compare the measured air/fuel ratio to the target air/fuel ratio and automatically increase or decrease fuel delivery accordingly (it’s intended to keep emissions low). Most new bikes go closed loop (to maintain stoichiometric) at cruising speeds in the higher gears.

In typical open-loop mode, throttle openings anywhere above 50% will shift the bike into open-loop. In this mode the fuelling data comes from the map and the O2 sensor is ignored. Another typical area where openloop mode is used is start-up. As the engine is still cold the O2 sensor isn’t able to supply reliable data to the ECU for controlling the air/fuel ratio.