I got my hands on Shark’s Explore-R helmet towards the tail end of summer in 2017 – and since then, it’s been my go to lid of choice. Despite its outwardly off-road oriented appearance, it’s actually three helmets in one brilliant, versatile package – thanks to its removable peak and visor, and a set of bundled goggles with Carl Zeiss lenses. 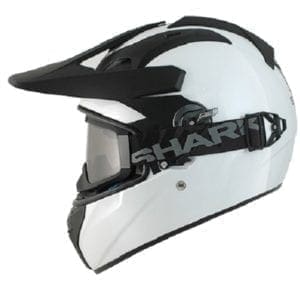 In short, the Shark Explore-R is truly customisable, allowing you to switch between full-face road helmet and off-road lid in a matter of seconds. And Shark has even tweaked the Explore-R’s design, allowing the latest incarnation to be worn with both the peak and the visor, at the same time. Brilliant right?

Getting into specifics, the shell of the lid is constructed from carbon aramid and multiaxial glass fibres – which means it’s stronger and lighter than a typical thermoplastic lid, and should be well up to the job of keeping your noggin safe. On my head, I found it super secure, and impressively comfortable, thanks to its internal padding and protection. 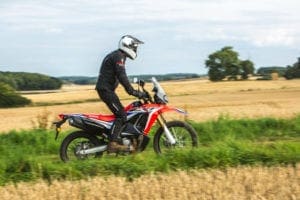 For ventilation, the helmet comes with a closable chin vent, two brow vents and a larger exhaust vent. It’s not the most sophisticated of systems, but in most scenarios, it’s well up to the job. When you’re using the lid with the goggles, you’ve got all the ventilation you need – but if you opt for the visor instead, you’ll likely find it a little stuffy in warmer weather (if we ever see any, that is).

Elsewhere, the lid is equipped with a really clever built-in neck scarf – that can be zipped away – to protect you from the worst of the British weather. There’s also a drop down sun visor, a micro lock buckle system and space for SHARKTOOTH, Shark’s own communication system. Plus, the optically challenged among us have been looked after, with special grooves inside the helmet offering additional space for your glasses.

Admittedly, it’s not a cheap lid – but personally, I don’t think it’s overly expensive either. After all, it is three helmets in one. Of course, the all-in-one style isn’t for everyone. But if you’re going to be doing a range of riding, from tearing up the trails to thrashing around a track, the Shark Explore-R could be the helmet for you. I know it’s the one for me.