Highway network to get an extra 900 miles 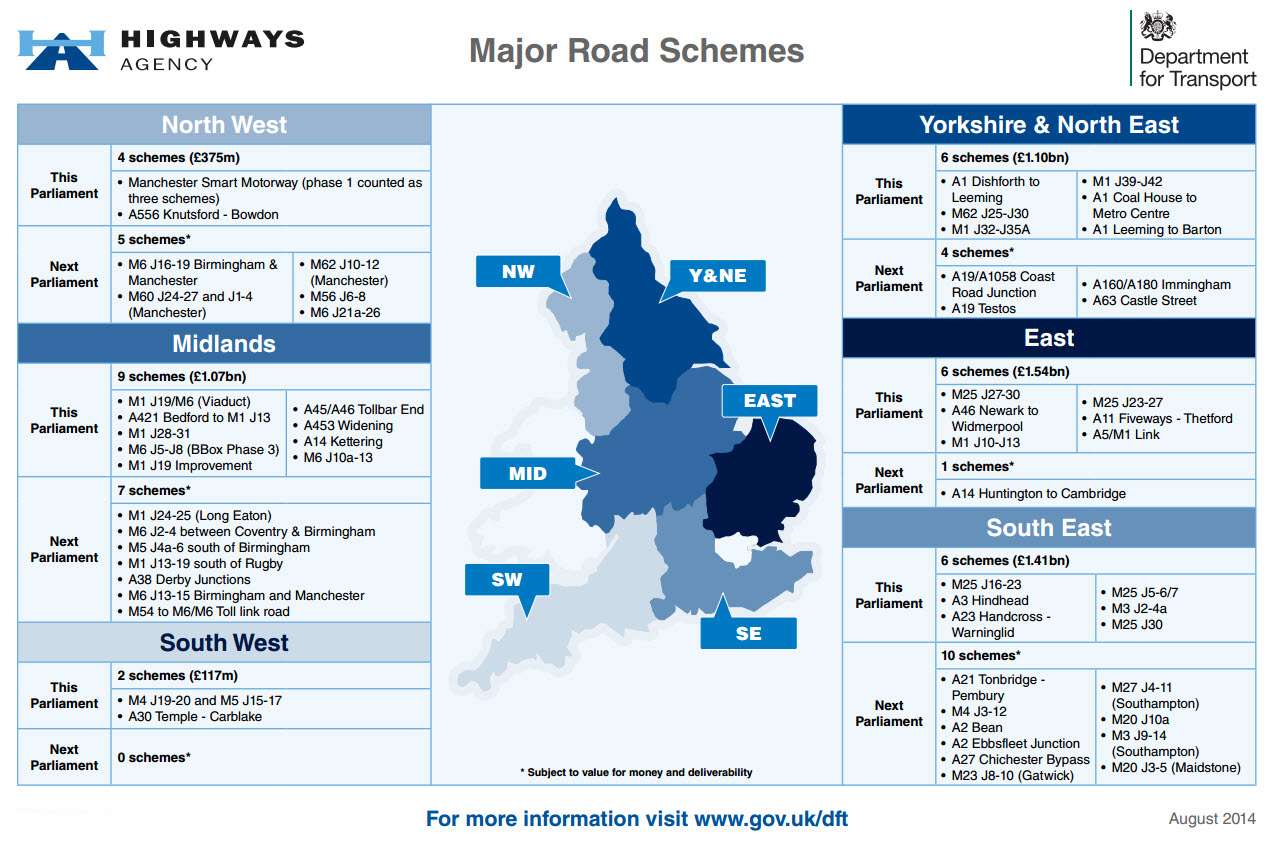 Road users will see around 900 extra lane miles of road capacity added to England’s strategic highway network by 2021 – a third more than was provided in the last ten years.

The boost is thanks to a huge £24 billion investment – the biggest since the 1970s – which will see annual funding for enhancements to our motorways and major A roads triple over the next 6 years. Investment includes more than £9 billion on maintenance, £6 billion of which will be spent on resurfacing 3,000 miles of the strategic road network.

Roads Minister John Hayes said: “As a crucial part of our long-term economic plan to secure a brighter future for Britain, we are fixing problems that have been created by governments of the past by delivering around 35% more capacity on our roads than was delivered in the 9 years up to 2010. It is because of the difficult decisions that this government has taken that we are able to triple investment in our major roads to over £3 billion a year up to 2021.

“We’re doing this with great care for our environment. This extra capacity will be achieved mainly by the use of smart motorways and selective widening to minimise the environmental impact.

“This government will oversee more work, more safety, and more improvements on our roads. This will benefit hard-working people and businesses, help ease congestion and create a road network fit for the 21st century and beyond.”

The period 2001 to 2010 saw construction of 574 lane miles. This government has committed to 60 new road schemes, the majority of which will be completed by 2021, subject to value for money and deliverability. This will provide 962 miles of new road, 35% more miles of road per year than under the previous government.

More road schemes are expected to be added to the programme following the 2014 Autumn Statement, which could include solutions identified as part of 6 feasibility studies that are looking at dealing with some of the most notorious and long-standing hotspots on England’s roads, including the A303 in the south west and the A47 in the east of England.

Along with the results of the Highways Agency route strategies – a comprehensive review of all roads in England – the outcomes of the studies will help ensure the government continues to meet the future needs of roads users.

Taxpayers will also save more than £2.6 billion over the next 10 years as the Highways Agency is transformed into a government-owned company. The new company, of which the Transport Secretary is the single shareholder, will use stable, locked-in funding to boost efficiency with the supply chain and will be more accountable to Parliament and road users.

To help support the government’s economic ambitions, the Department for Transport will later this year publish a long-term roads investment strategy, setting out a clear vision for the new highways company that will include a new investment plan and set out performance requirements for the roads network.