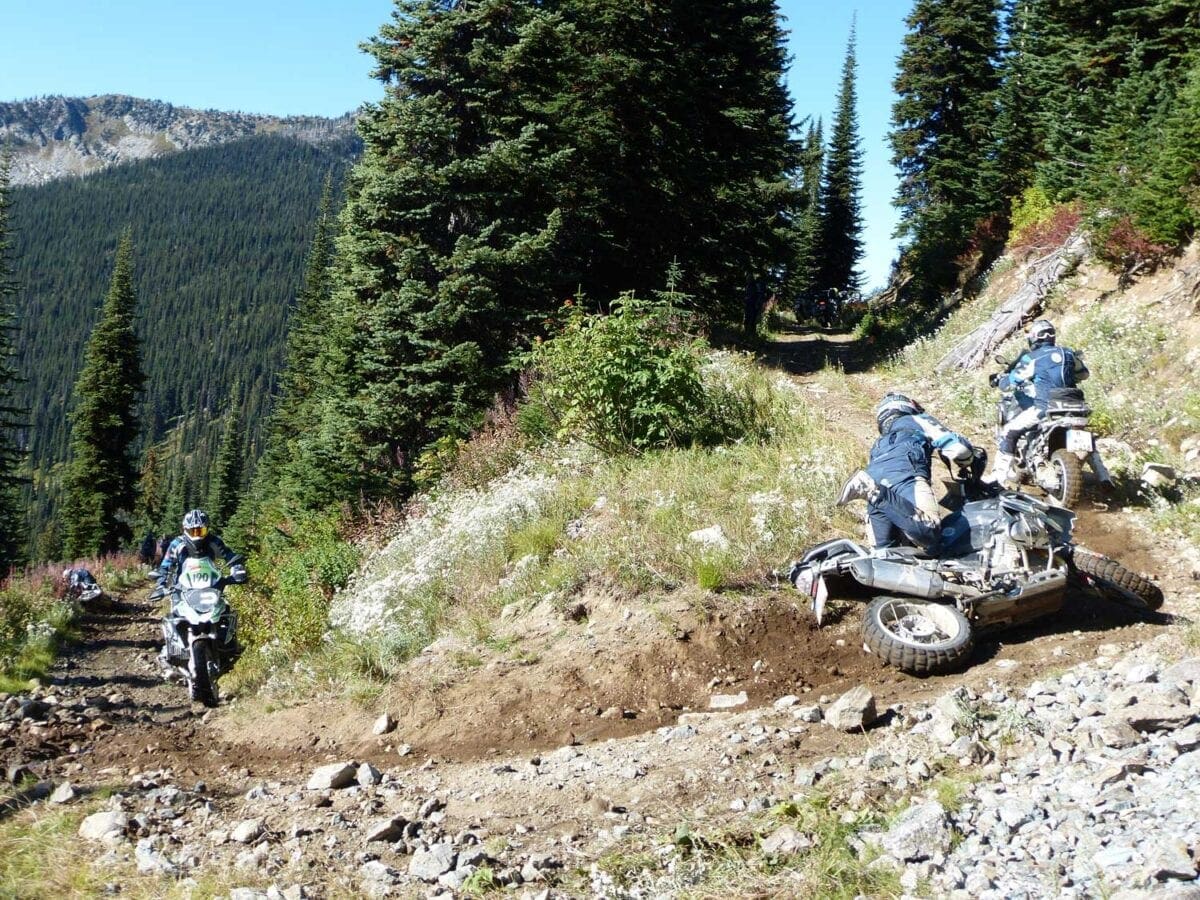 Bruce Wilson, Motorcycle Sport & Leisure’s Deputy Editor is with the three riders making up Team GB in the BMW GS Trophy – the ultimate two-wheeled adventure.
Staged bi-annually, it sees amateur racers from around the globe qualify for a spot in BMW’s prestigious R1200GS fuelled event, covering thousands of kilometres of gruelling off-road terrain. This year it’s being hosted in Canada and there are 16 teams entered from around the world, taking on an abundance of dynamic challenges, which remain a secret until the moment the competitors arrive for the task. Physically, mentally and emotionally demanding, the GS Trophy is no game for half measures…

It’s as though every day’s ride is better than the previous. And, believe me, that takes some doing. Today was something else, kicking off with an awesome climb up the side of a mountain, littered with lakes and dense foliage. The ride was particularly rocky and it proved to be the perfect warm-up route for our first special challenge of the day, consisting of a four bike climb up and around a very loose ascent with a 180̊ degree switchback at the midway point. Following in the wake of the extremely fast Team South Africa, we put in a pretty decent performance in getting all bikes over the finish line in a respectable time. Of course, it could have gone smoother, but our delegated lead rider got a little crossed up after setting off and soon found himself mounted halfway up the side of a vertical climb, causing the rest of us to find a way around him on the narrow, sheer-faced path. Watching a few of the other teams, we quickly realised that our time was pretty reasonable, with most others taking a full minute longer than us to complete the challenge. It felt pretty good and we were in the perfect frame of mind to chill out and enjoy the rest of the narrow 40km trail, which had us winding our way in every direction through frosted landscape in the minus degree climate. 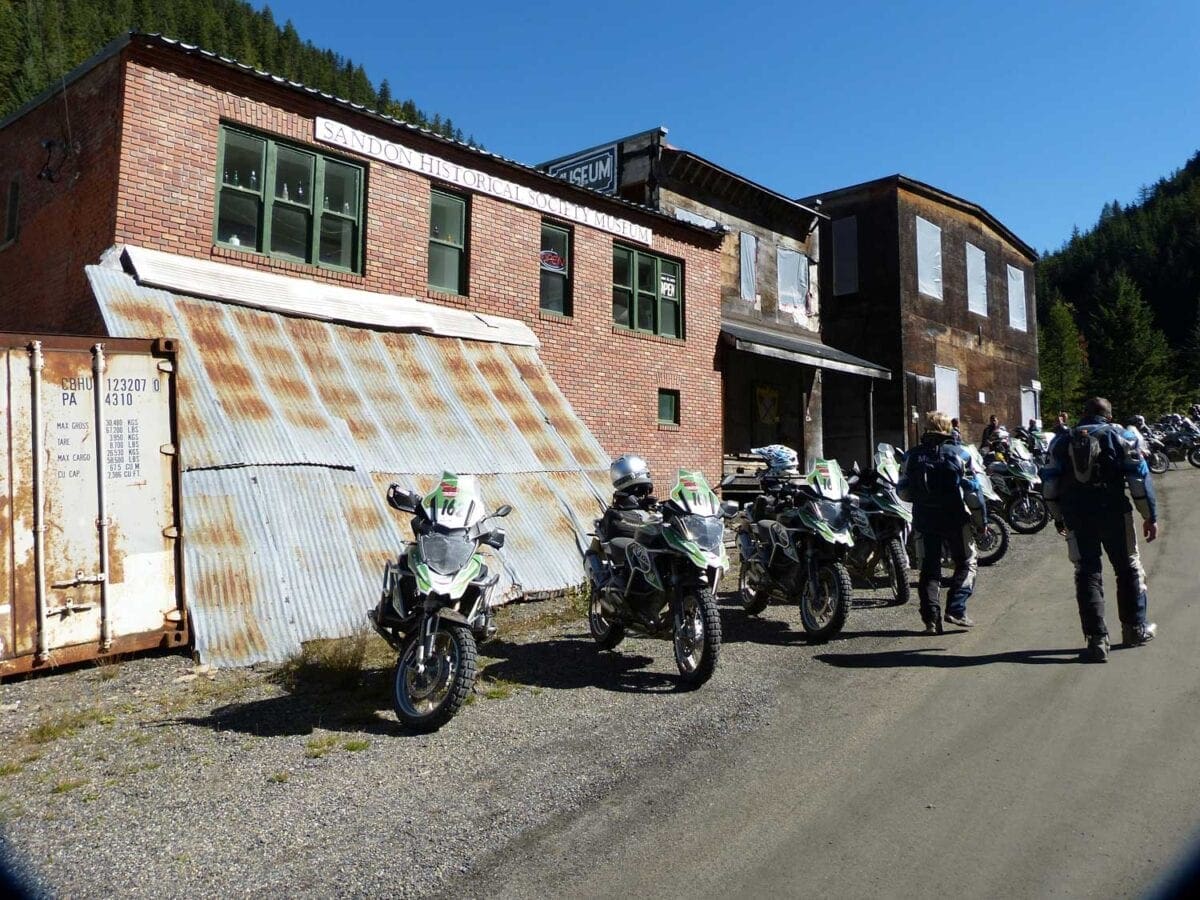 Tarmac roads are an essential link for the GS Trophy’s route, but after having so much fun in the wilderness, even the most playful of roads seem bland by comparison. Five days in and we’ve all found ourselves craving dirt tracks, of which, thankfully, there are plenty in British Columbia. Our second trail of the day led us to the gold rush town of Sandon. A museum tour was on the cards, but a tight schedule meant we only had a matter of minutes to take in the remainder of the once bustling settlement, which saw over $30million worth of gold and silver mined from the surrounding area before a huge literally washed the town away in the 1950s.

From here we took a dirt trail upwards, crossing over a wooden bridge, meandering our way along a technical path. We’d been told on day one that we were destined to face a particularly challenging mountain edge ride with 28 consecutive switchbacks and now we were facing that demon. The going was tough from the very start, requiring good clutch control and correct body positioning to master the loose surfaced and rocky, off-camber turns. Counting every one that I survived, it was impossible not to feel terrified by the sheer sided drops to the bottomless valley below. If you were lucky you’d hit a tree on the way down, but I wasn’t wanting to chance my luck. Concentration levels were at their highest as we wound our way up to the summit, some 10,000ft up. The mental drain of the climb was overwhelming and I was glad to grab a few minutes at the top before we made our physically gruelling descent back to ground level.

With every day I can feel my riding improve, bettering my lines, throttle control and braking on descents. The guys in Team GB have really helped me to grasp the essentials and I’m now so much more confident with my abilities, which means I have so much more time to relax and enjoy this amazing event when my wheels are turning. And even when they’re not in motion, I’m still having an awesome time. As a special treat, we were all taken to a natural hot spring today on the outskirts of Nelson. It proved a welcome tonic for my aching body, before being put into action once more at our campsite to take on the final challenge of the day. It was a four fold jobby, consisting mainly of trials riding, with individual challenges being handed out to our four man team. The first of which was to fit a GS’s front wheel in the fastest time. We scored the sixth fastest performance and things were looking pretty good until our lead trials rider made a bit of a hash of a section of tight turns. In the three remaining elements, strong performances on a controlled downhill descent, a timed braking challenge and the task of lifting a GS over a 2ft mounted tree stump helped us to regain some momentum. But not as much as we’d of liked. At dinner it was announced we’d improved in our rankings to mirror both Germany and Korea in joint 10th. Tomorrows another day and we’ll be trying as hard as ever to keep on progressing. Hopefully we will, but even if we don’t we’ll certainly make sure to make the most of whatever the day has in store for us. 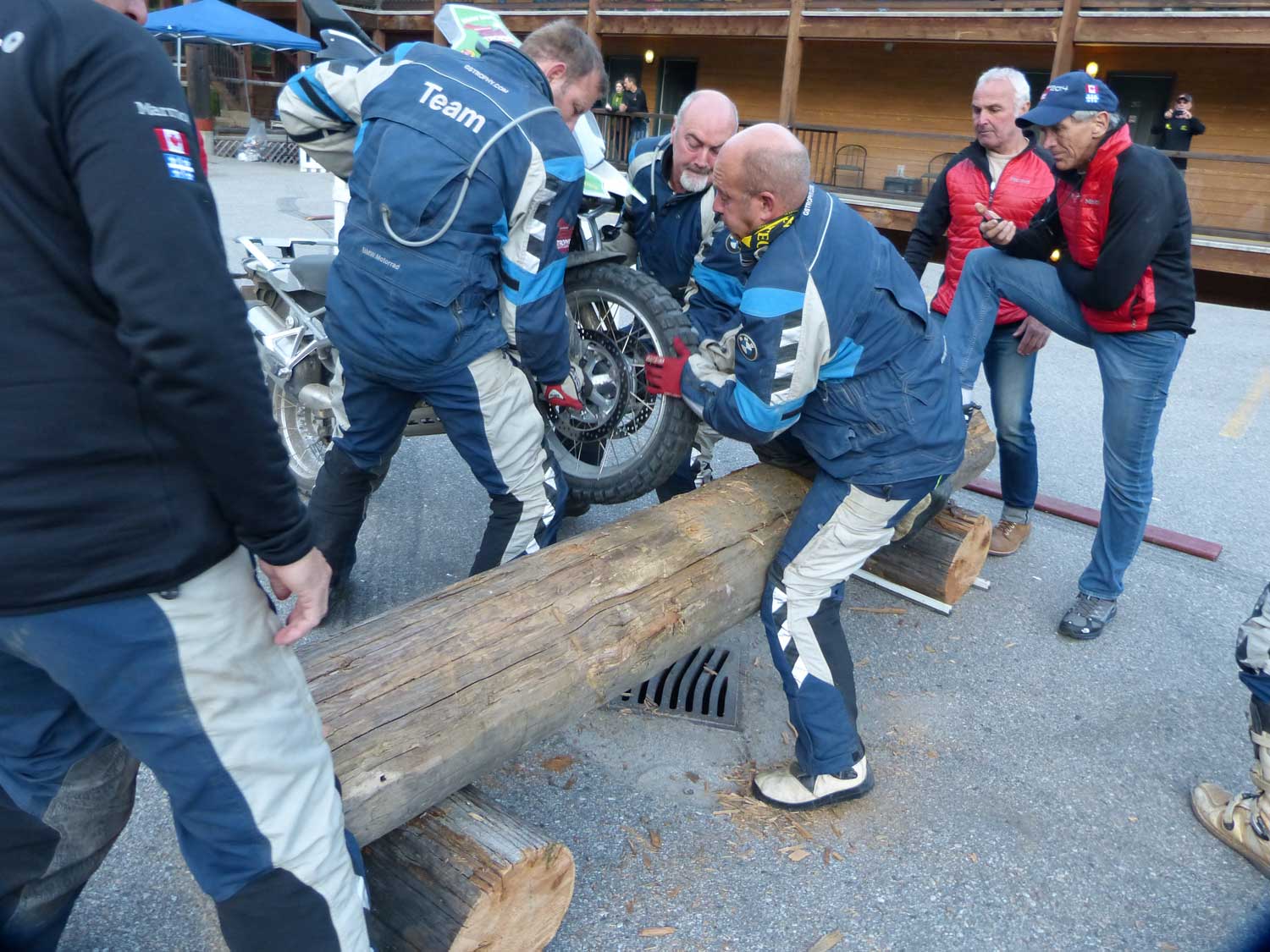