Touring India on a motorcycle 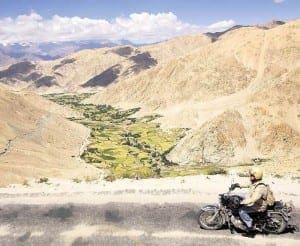 Why India?
India is a huge country, with great geographical and cultural diversity. Steeped in history, blessed with outstanding natural wonders, crammed with ‘currylinary’ delights, alive with colourful adventures and basking in sunshine, the world’s biggest democracy has something to offer almost everyone. India also represents very good value for money, as food, accommodation and fuel costs are very low compared to more developed countries.

The most popular destinations

The Beautiful South
Most trips to the south of India include the Western Ghats mountains and the palm-fringed coast of the Arabian Sea. Rising more than 5000ft from the beach, via ultra-twisty roads, the mountains offer a cool retreat from the coast, with breathtaking scenery and many wildlife reserves in this biodiversity hotspot. Kerala in the far south is a very popular destination, thanks to its famous cuisine, colourful culture and comfortable accommodation. The coastal water worlds, high mountain tea estates and glorious jungles all add to the enjoyment of swinging a bike along relatively good roads. Further north along the Western Ghats are the states of Karnataka and Goa. In infrastructure terms, Karnataka is more basic and ‘full-on India’ than Kerala, but still has the mountains, wildlife reserves, fascinating historical sites and beautiful beaches. The best time to visit South India is from November to April, when the climate is relativelymild (it can still be pretty hot on the coast) and largely rain-free.

The Desert Kingdom
In the far west of India is Rajasthan, a large proportion of which lies in the Thar Desert, bordering Pakistan. Formerly a Princely State, the ‘Land of Kings’ contains many ancient forts and palaces, built by Rajput warriors of old. Riding through dune-scapes and villages that have changed little in centuries, past camel trains and buffalo herds, a Rajasthani ride is generally a relaxing and often a straight-line affair.

In the south and east of Rajasthan, the desert gives way to hills and forests. There are many national parks in the state, including Ranthambore (famous for its tigers). From late October until February, Rajasthan’s climate is generally cool and clear.

The high stuff
The Indian Himalaya is home to the planet’s highest roads, awesome deserts, forested valleys and the Royal Enfield motorcycle. The scale of the place is almost beyond imagination, the roads challenging and satisfying in equal measure. The main areas for bike touring are the Spiti Valley and Ladakh, both dry, high-altitude destinations. The culture in these areas is predominantly Tibetan-Buddhist and roads vary from smooth Tarmac, to rough-ish dirt. A common goal for the Himalayan biker is to scale Khardung La, which at over 18,000ft is reputed to be the world’s highest ‘motorable’ road. Along the way are high-altitude lakes, snowcapped mountains, breathless chasms and magical monasteries clinging to impossible slopes. Touring in these high, lonely places requires experience and back-up, but, with a sense of adventure to the fore, is within the scope of the average UK road rider. The highHimalaya is only reliably accessible from June until late September, due to snowfall. July can also be problematic, as the monsoon may make an appearance. 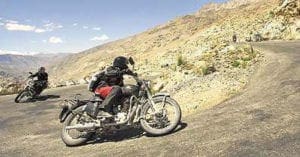 Riding in India
Riding in India is very different fromEurope. There are road rules, but it takes some time to work them out. Concentration and anticipation are essentials when dealing with a moving masala of people, animals and overloaded vehicles. Roads all over the country vary between good and abominable – surface conditions evershifting due to severity of monsoon, landslides and rebuilding speeds. The main highways of India are best avoided due to the heavy traffic and it’s far more fun to ride the quieter twisties anyway.

The bikes
The touring scene in India is very much dominated by Enfield Bullets – there is little alternative, thanks to punitive import duty on bikes made outside India.With only about 18bhp available, the ‘Bullet’ name is a little inappropriate, but as it isn’t safe to travel much above 45mph on most roads in India, lack of power isn’t really a problem. Bikes are either 350cc, or 500cc, the larger model being preferable in the Himalaya, where altitude affects power. Older, more rugged bikes have the gear lever on the right and four gears. Later tackle is five-speed, with the gears on the left, but these bikes are generally considered less reliable. The low-revving, torquey nature of the Bullet suits easy-going cruising and they’re surprisingly agile in the tight stuff.

What to look out for
There are many companies, based in many different countries, offering riding trips in India. Prices varywildly, as dooperators’ levels of experience and the back-up they are able to offer. Before booking an Indian bike jaunt, youmay like to consider the following… Reputation How long has the company been running and can you get genuine feedback from previous clients? Many people think it’s a great idea to start a touring business in India and plenty fail. Your tour team’s level of experience and local contacts will have a large impact on enjoyment and safety. Bonding Is your holiday money safe? If a tour company is offering to provide any two elements of a package holiday – flights and accommodation, or transport (bikes) and accommodation – then they must, by EU law, have a bond in place to guarantee the safety of your money in the event of the company’s insolvency. Any legitimate company will also have public liability insurance to guarantee they can meet any claim arising from negligence (it is still essential you have medical insurance). If you choose to travel with an operator from outside the EU, then you will be subject to local laws. Back-up Bullets are reliable, but only when well maintained, so it’s worth finding out what mechanical/spares support is on offer. In a country with very basic medical facilities in some areas, travelling medical back-up is also a good idea. Do you want to carry your luggage, or do you want it carried? What are your guides’ experience and language skills? What is the staff/client ratio?

What does it cost?
Prices vary widely, according to levels of back-up, standard of accommodation etc. A fortnight’s tour in South India starts from around £1250 (excluding flights) and Himalayan holidays with an established firm from around £2000. Before booking, ascertain exactly what’s included: meals, transfers, fuel, spares, accident damage etc. While in India, around £250 is adequate spending money for two weeks. 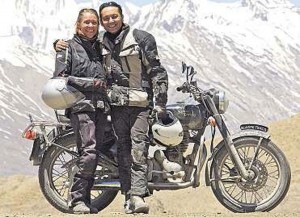 About the author
Ex-bike journalist Damon I’Anson has been working for Indian bike tour specialist Blazing Trails for the past three years. The company was set up by his wife Suzie 10 years ago and has introduced nearly 2000 people to Indian bike riding. For more information on the tours, please check out www.blazingtrailstours.com