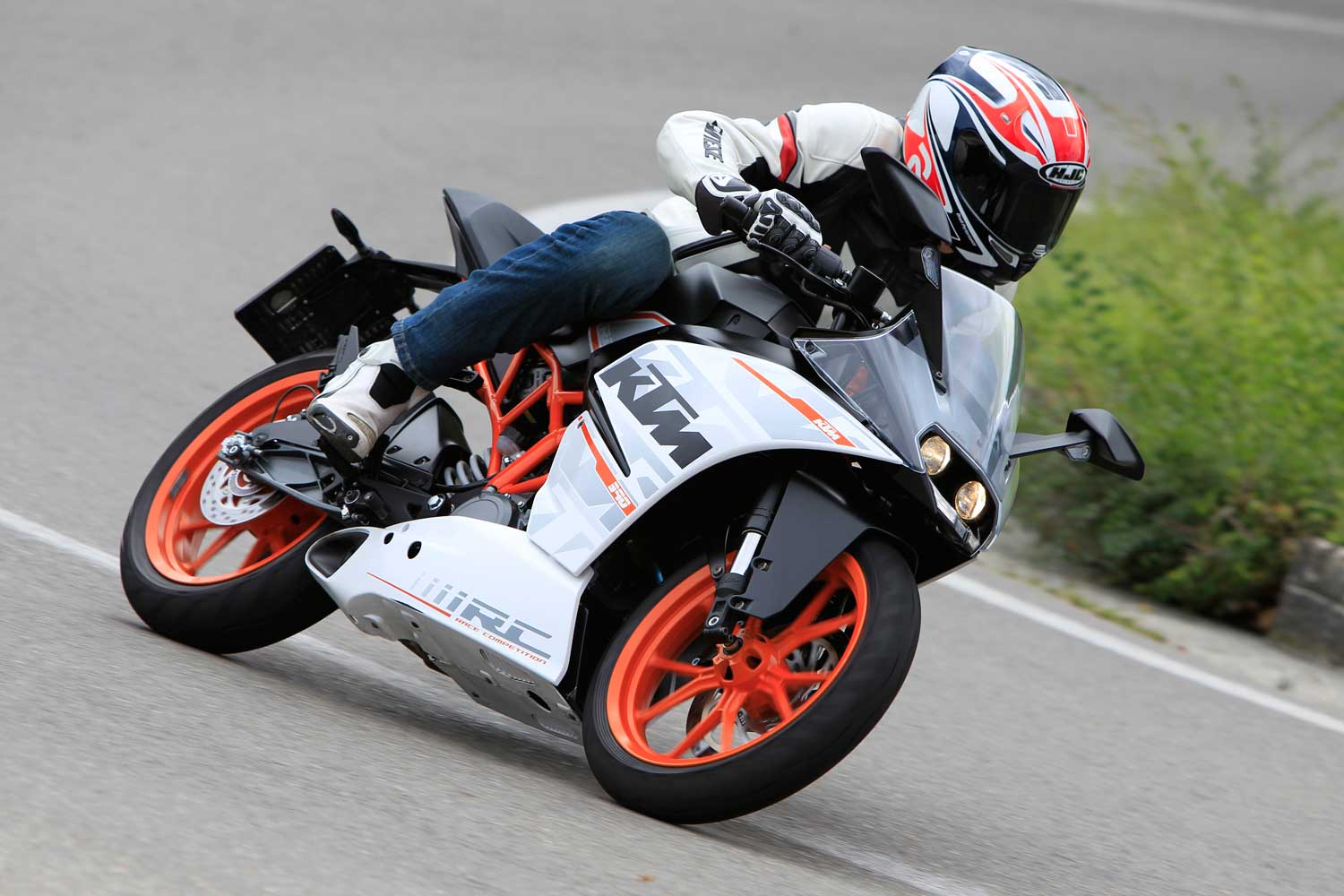 If you think young motorcyclists get a bad deal these days with restrictive performance limits and complex legislation, a spin on the A2-compliant RC390 might just change your mind. A 375cc sports bike has been on the cards from KTM ever since last year’s launch of the naked 390 Duke. Like the Duke and its other close relation, the recently launched and visually near-identical RC125, this bike is produced at Pune in India under KTM’s link with Bajaj.

It’s a stunningly attractive little bike, with sharp and typically KTM-like lines all the way from the fairing nose – with its pair of small headlights – to the tip of the seat unit. This looks like a solo seat but the rear section is actually a pillion seat, made from a blend of rubber and foam, and complete with hand-holds below. It’s a brilliantly innovative piece of design, and the bodywork is similarly stylish and clever, notably in the way the exhaust silencer is set into the streamlined belly-pan. Small-capacity sports bikes don’t come much more desirable than this. 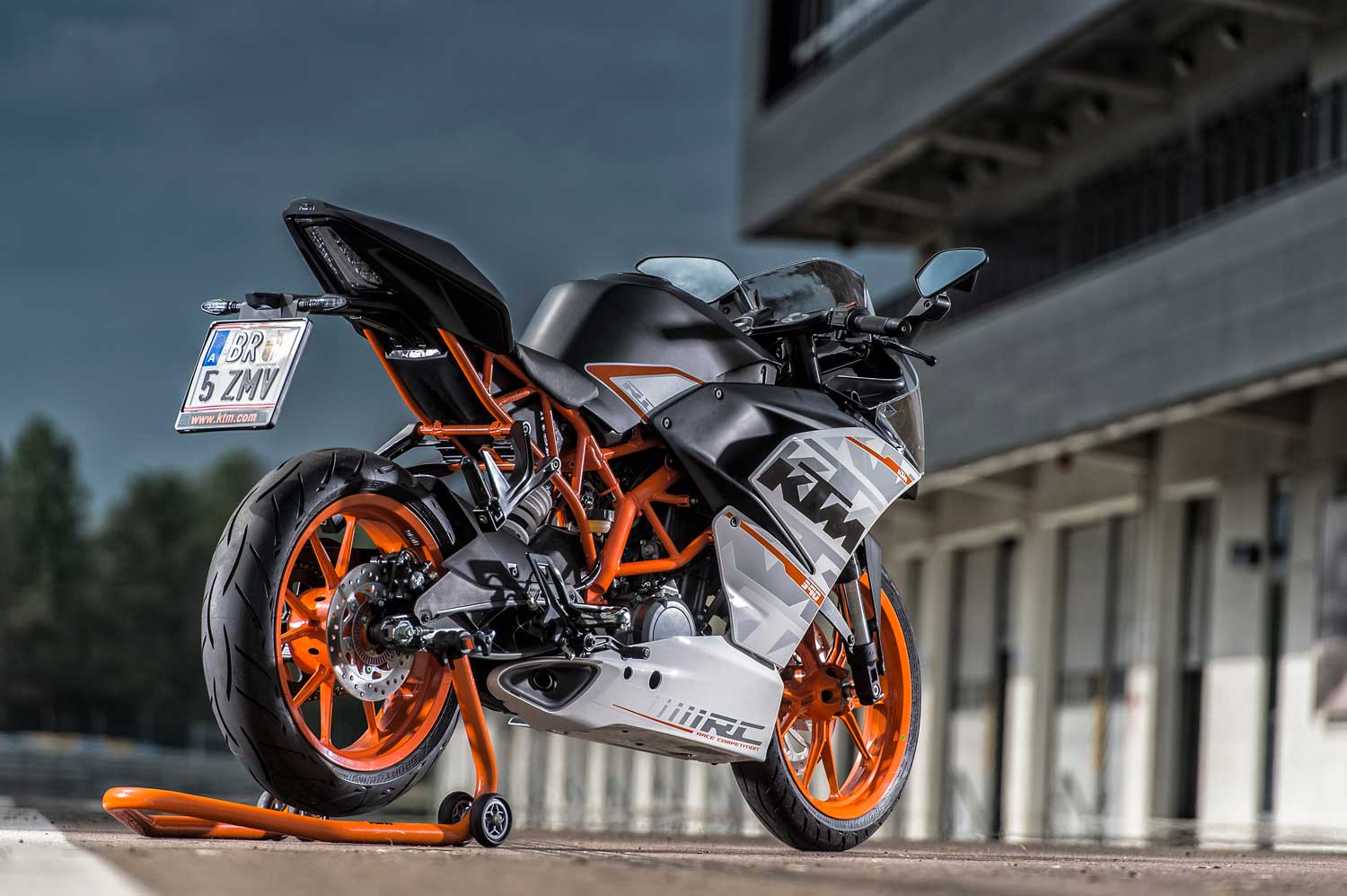 In typical KTM fashion it’s a relatively simple but refined Dual OverHead Cam, four-valve single. The liquid-cooled unit was built for both the RC and Duke, and was designed to be as compact as possible, partly because it bolts into a frame whose basic layout is shared with 125 and 200cc models. The relatively short-stroke (89 x 60mm) powerplant produces its 44bhp maximum at 9500rpm, and can be revved to over 10,000rpm.

The RC follows the 390 Duke in being created for sale in all KTM’s 80-plus markets worldwide, but its specification has been shaped by European licencing laws. Its 44bhp maximum output and 147kg dry weight figure mean the single is just within the limits of power, weight and power-to-weight ratio for the A2 licence class. Even the 390 Duke’s identical engine has to be restricted by a couple of horsepower, because its power-to-weight ratio is fractionally too high, but the RC’s extra few kilos mean it can be ridden on an A2 licence from the age of 19. 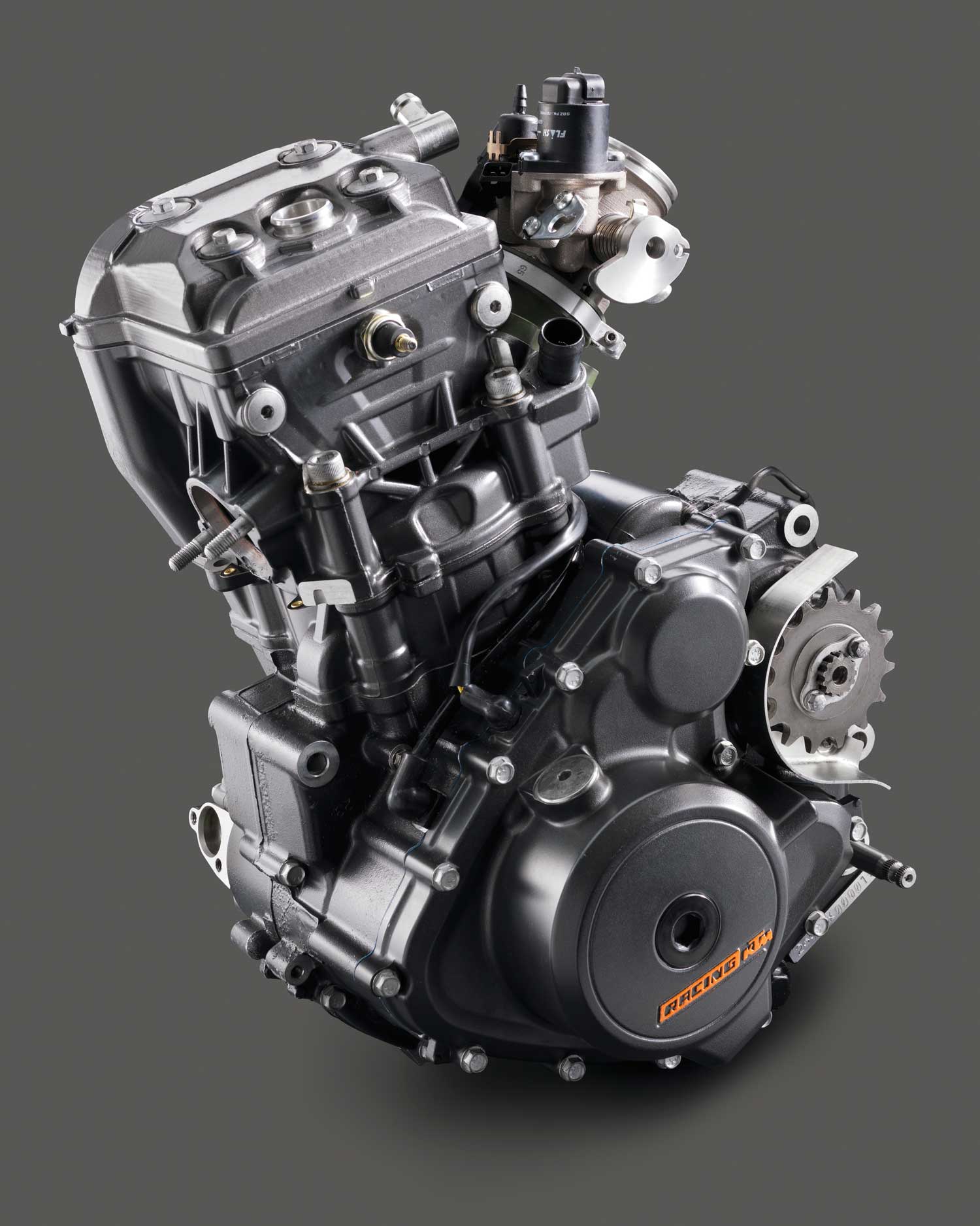 The tubular steel trellis frame looks very similar to the Duke’s but incorporates a few key differences, including a 1.5° steeper headstock that brings rake to a sharp 23.5 degrees and reduces trail by 6mm to just 88mm. The wheelbase is also 27mm shorter (at 1340mm), contributing to a near neutral weight distribution of 49 per cent front, 51 per cent rear with a 75kg rider on board, compared to the Duke, which puts 54 per cent over the rear wheel.

The sportier riding position also contributes to that change, as the lower, clip-on style bars pull the rider further forward to put more weight over the front wheel. The footrests are slightly more rearset, and the seat is 20mm higher at 820mm. Despite being very tall I wasn’t particularly cramped, so it’s a good compromise. There’s not too much of a reach to the bars, and the RC’s light weight, slimness and respectable amount of steering lock will make it very manoeuvrable for most riders. Other details are neat, including the intricately cast aluminium swing-arm, orange-finished frame and wheels, and the way the front indicators are integrated with the mirror stalks.

If you can afford the £4999 asking price and are looking for a small-capacity sports bike, or if you have an A2 licence and want the most exciting machine available, the RC390 has got to be a strong contender. It’s stylish, quick, sweet-handling and even reasonably versatile. Fuel capacity is hardly generous at 10 litres but, with consumption ranging from 50 to over 70mpg, that should be enough for a reasonable range of 100 miles or more.

Accessories include practical rear bags and a GPS bracket as well as racy crash bungs, articulated hand levers, wavy front brake disc and an Akrapovic slip-on silencer. Those would inevitably add to the cost but the RC’s five-grand price means it’s very competitive with rivals including Honda’s CBR500R and Kawasaki’s Ninja 300. Neither of those bikes can match the KTM’s blend of style, performance, handling ability and racetrack cred. 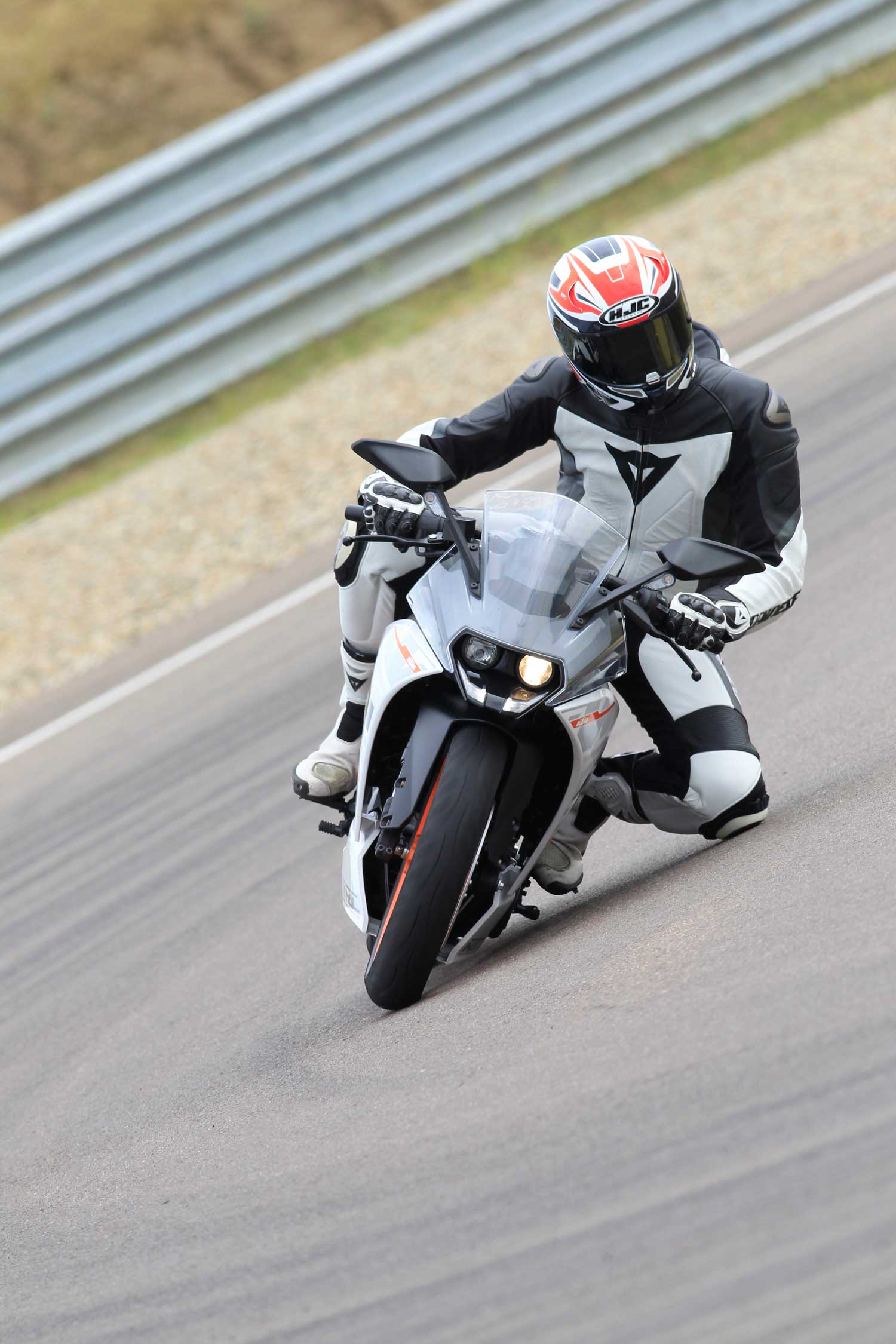 Despite its racy looks the RC didn’t feel especially sporty after I’d climbed aboard at the launch near Modena in central Italy, partly because the bars aren’t very low or far away, so you don’t need to lean forward all that much to reach them. The view is of a simple, black-finished top yoke and a compact, orange-faced digital instrument panel that is shared with the Duke. Its big, central speed numeral sits below a horizontal rev-counter bar that is backed up by a change-up light, but whose numerals are too small to be easily legible.

The single-pot motor came to life with a disappointingly muted, lawnmower-like chuntering. Throttle response was pleasingly precise but very gentle – almost a bit flat at low revs – with not much doing until about 5000rpm. Then again, the bike looks so grown up that I occasionally had to remind myself that it was just a 375cc single, so I shouldn’t be expecting fierce low-rev acceleration or a throaty exhaust; and that its rider-friendliness was a more important attribute.

When we reached the open road it pulled harder above that five-grand figure, and equally importantly it felt very happy to rev, staying impressively smooth, thanks to the engine’s balancer shaft, until the change-up light flashed at about 9000rpm. Most singles get unpleasantly buzzy at higher revs but the KTM was more than happy, which made caning it on some twisty country roads fantastic fun, the flat-out acceleration and ankle-blurring gearchanges arguably no less enjoyable for being at relatively sensible speeds. 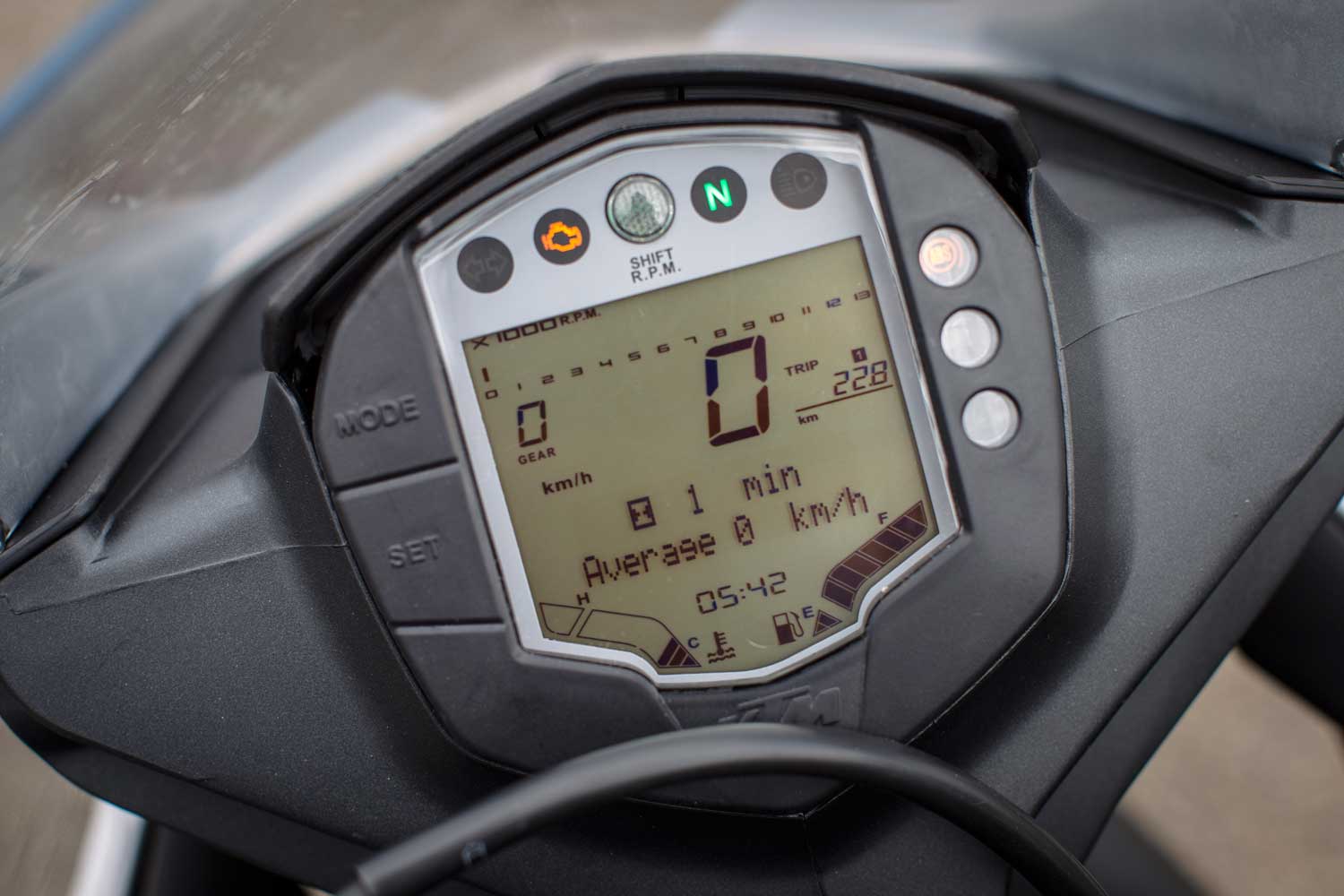 The RC certainly proved that 44bhp could provide a lot of entertainment and a decent amount of speed in a bike as light and capable as this. On a short stretch of motorway it sat effortlessly at 85mph, feeling utterly untroubled. And given a handful on a clear stretch, the KTM put just over 100mph on the clock with a bit more to come.

Handling was excellent: light and responsive yet stable, helped by the rigidity of the frame and swing-arm. The rear end felt slightly vague in a few bends, because there’s a generous 150mm of wheel travel and the WP unit’s dual-rate spring is quite soft at the top of its stroke. But the non-adjustable damping level is just about right, and the generous travel doubtless contributed to the thin seat still being reasonably comfortable after several hours’ riding.

The RC was also frantic fun on the twisty Modena circuit. The single picked up speed rather than charged down the short straights, occasionally hesitating when I struggled to get my oversized boot under the slightly short gearlever to change up exiting some turns. (This hadn’t been an issue on the road.) The little bike’s agility and light weight made it brilliantly easy to throw around, especially through the circuit’s two slow-speed chicanes.

I was very impressed by the 43mm WP forks, which have 125mm of travel (25mm less than the Duke), gave an excellent steering feel and whose non-adjustable spring and damping rates seemed spot on. The shock worked very well, too, especially once I’d added a couple of turns of preload – the only tuning option – to suit my height and weight.

As with the 390 Duke, I was slightly disappointed by the front brake blend of single 300mm disc and four-pot radial Bybre (Brembo’s subsidiary in India, where the RC is built) caliper. The set-up was adequate but not great; just lacking a bit of sharpness. But the stopper pulled the bike up hard enough if given a firm squeeze. And it’s hard to complain too much, given that it incorporates ABS that worked well even on the track.

I also had no complaints about the Metzeler M5 rubber, the rear of which is a respectably wide 150-section tyre. They gripped well on the road and were well up to track use, although a couple of riders slid off after losing the front end at slow speed. That’s probably simply an indication of how much frantic fun the bike was, rather than of any flaws. The RC390’s specification might have been drawn up with 19-year-old novices in mind, but riders of any age and experience can have a brilliant time on a bike as good as this. 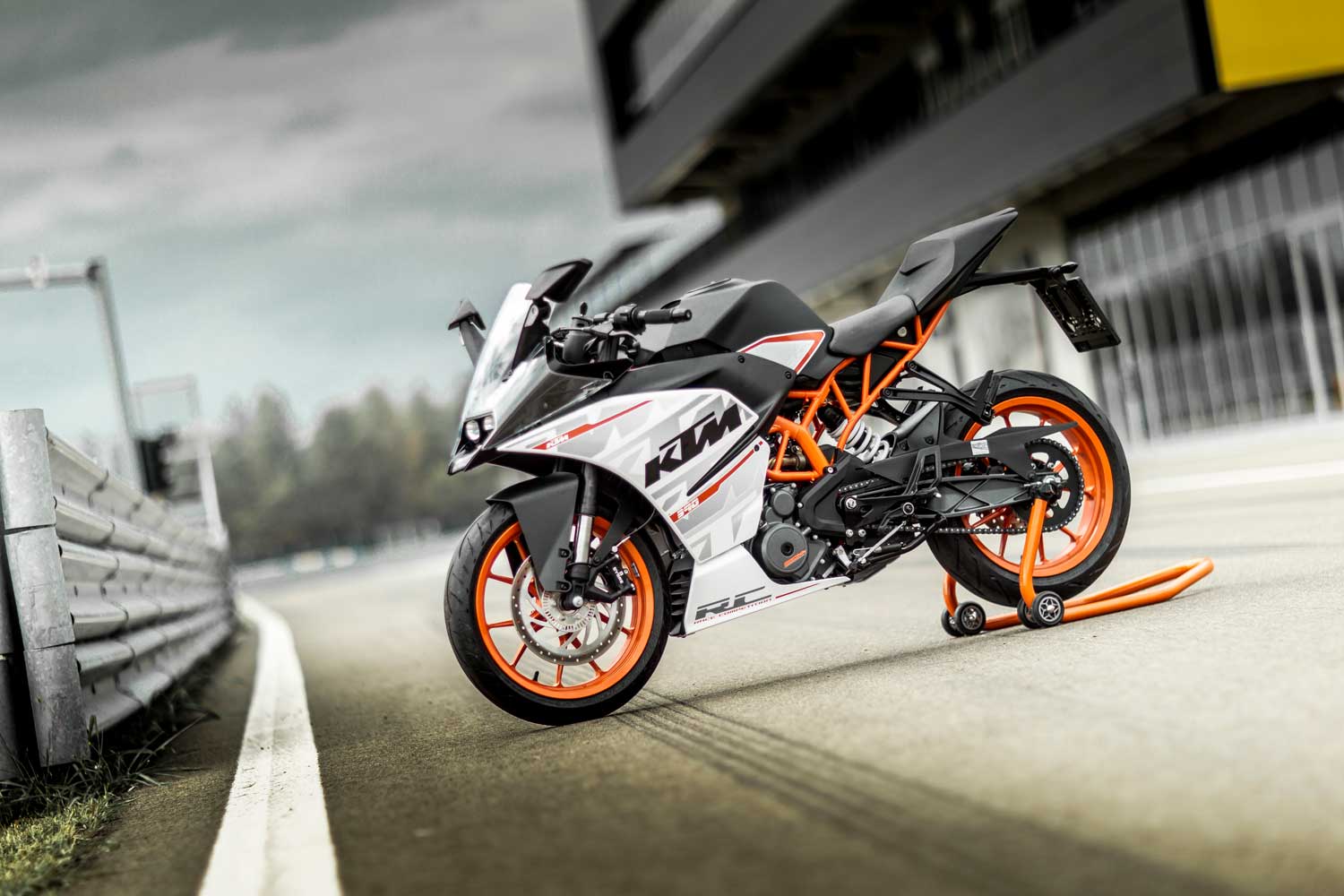