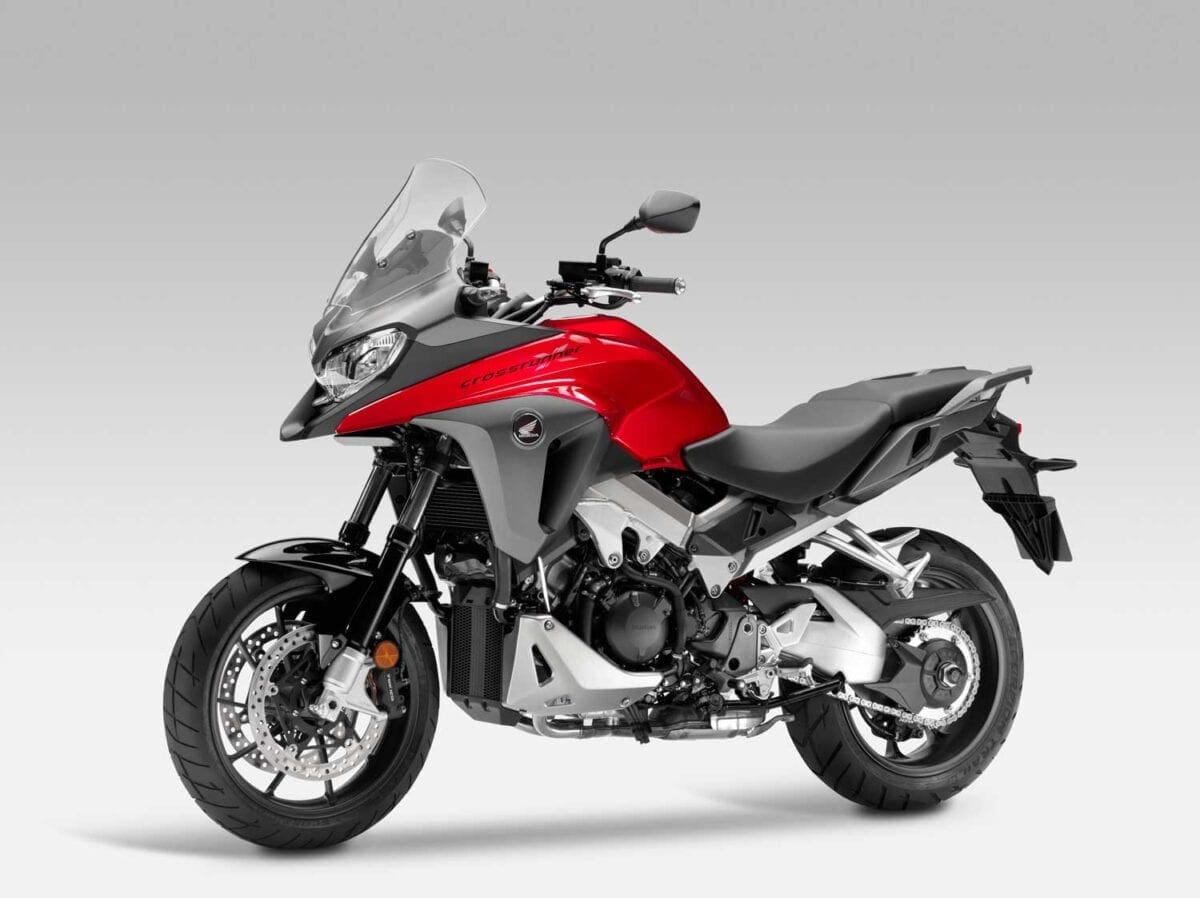 The 2015 VFR800X combines the VFR800F sports touring platform with an upright, comfortable riding position to create a multi-purpose motorcycle with a soulful V4 motor providing exceptional power and feel, and a chassis that – Honda says – can carve out corners or the daily commute in equal measure.

Incorporating many elements from the new VFR800F – the 2015 VF800X strongly pushes motorcycle development forward, with a clear focus on performance and technology. Its revised engine and chassis, HSTC, LED lights, and refined, sharper styling improve both function and form to create a practical all-purpose motorcycle with that sharp V4 edge for excitement with every ride.

Mr Yoichi Inayama, Large Project Leader (LPL) VFR800X: “For this development of the VFR800X we wanted to create a premium motorcycle with a ‘ready-for-action’ feeling, for customers to use with maximum enjoyment every day. The styling demanded beautifully functional parts, and light proportions with minimal fairings. We wanted an upright position giving great visibility and agile handling so the rider can attack any corner with confidence. And refinements to the V4 engine had to deliver responsive and enjoyable power.

“Our new VFR800X has fulfilled these goals and follows the VFR tradition: it has an array of advanced technologies including LED headlights, our Honda Selectable Torque Control system and automatic turn signal canceller. For us it gives a craving to ride every day and we hope it brings the same fun and good spirit to our customers’ lives” 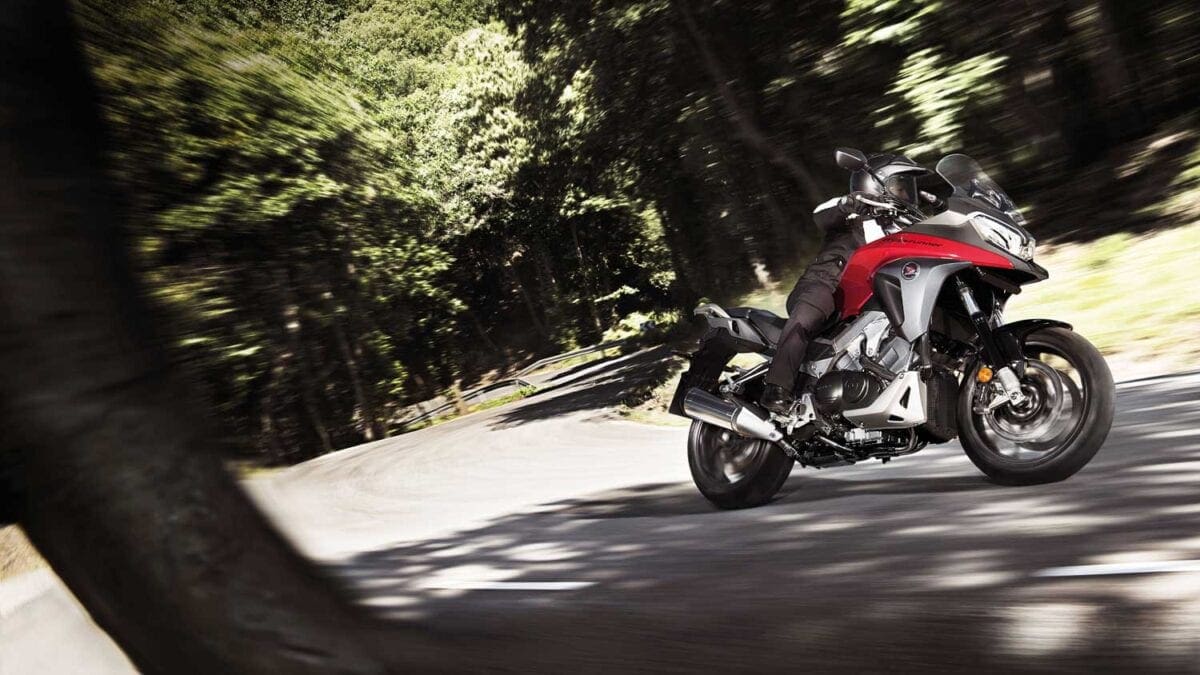 Core to the VFR800X is its 90° V4-VTEC DOHC 16 valve engine. It boasts low and mid-range torque for fluid, effortless drive plus improved top-end power compared to the previous model, and features a new 4-2-1-1 exhaust similar to the new VFR800F.

In addition the VFR800X rider now benefits from Honda’s Selectable Torque Control system (HSTC) – similar to that fitted to its big-brother VFR1200X Crosstourer. If the system senses an imminent loss of rear wheel traction it seamlessly reduces torque to allow the tyre to grip. Two levels of HSTC are available (plus off) and mode selection appears within the LCD instrumentation.

The evocative aluminium twin-beam frame features a revised subframe while the single sided aluminium swingarm ­– another VFR signature piece – is stiffer and lighter. Visually identical to the VFR800F, the VFR800X’s suspension has longer travel; 25mm in the two-piece telescopic forks and 28mm in the rear shock. ABS is fitted as standard and the front 17-inch hollow-cast aluminium wheel is fitted with dual 310mm discs, worked by radial-mount four-piston calipers.

The VFR800X is a true VFR – a motorcycle designed for hard riding fun, but with style, comfort and practicality. Accordingly, the seat is now adjustable, offering two height options, and 5-stage heated grips and Honda’s self-cancelling indicators are both fitted as standard. New, full LED lighting adds a distinct presence and premium finishing touch.

Purely a street-focussed machine, and with a strong hint of VFR800F around the ‘X’’ signature ‘white light’ LED headlight, the VFR800X’s overall design follows a theme of ‘sophistication‘ and its minimal style puts the muscular V4 form firmly on display.

Styling takes its design cues from the VFR1200X Crosstourer, with an efficient screen and fairing and fixed beak-like front cowl above a short front mudguard. There’s plenty of room for a pillion and the rear grab rails and pannier mounts integrate into the tail unit; a sump guard protects the engine underside from debris.

Seat height can be adjusted to either 815mm or 835mm to help suit a wider range of riders. The seat itself features a slimmer frontal area, making ground reach easier and providing greater comfort whilst the upright riding position gives the rider great all-round visibility. Combined with the comfortable seat and footpeg positioning, the wide new 683mm handlebars put the rider firmly in control and ready to attack any corner. The VFR800X is easy to handle in all situations and quick to respond to more aggressive rider input whether carving through twisty mountain roads or riding through the urban jungle thanks to the extra leverage and low yaw inertia.

The VFR800X features Honda’s self-cancelling indicator system. Designed to work unnoticed by the rider, it compares front and rear wheel speed differential when turning (via the ABS wheel sensors) and calculates when to cancel indication when going straight again.

A redesigned LCD dash uses a reverse display against white LED backlight. The speedometer/tachometer are located together; there’s also a gear position indicator, fuel consumption and cruising range indicator, clock, ambient temperature gauge and twin trip meters. An indicator is included for the 5-stage heated grips. A compact ‘wave’ design key – with internal grooving – reduces the chance of breakage and adds to the overall premium quality feel of the bike.

All mechanical parts are finished in Light Silver, while Matt Black is used on the engine covers and wheels highlighting the body colour. The VFR800X will be available in two colour options: Candy Arcadian Red and Pearl Glare White 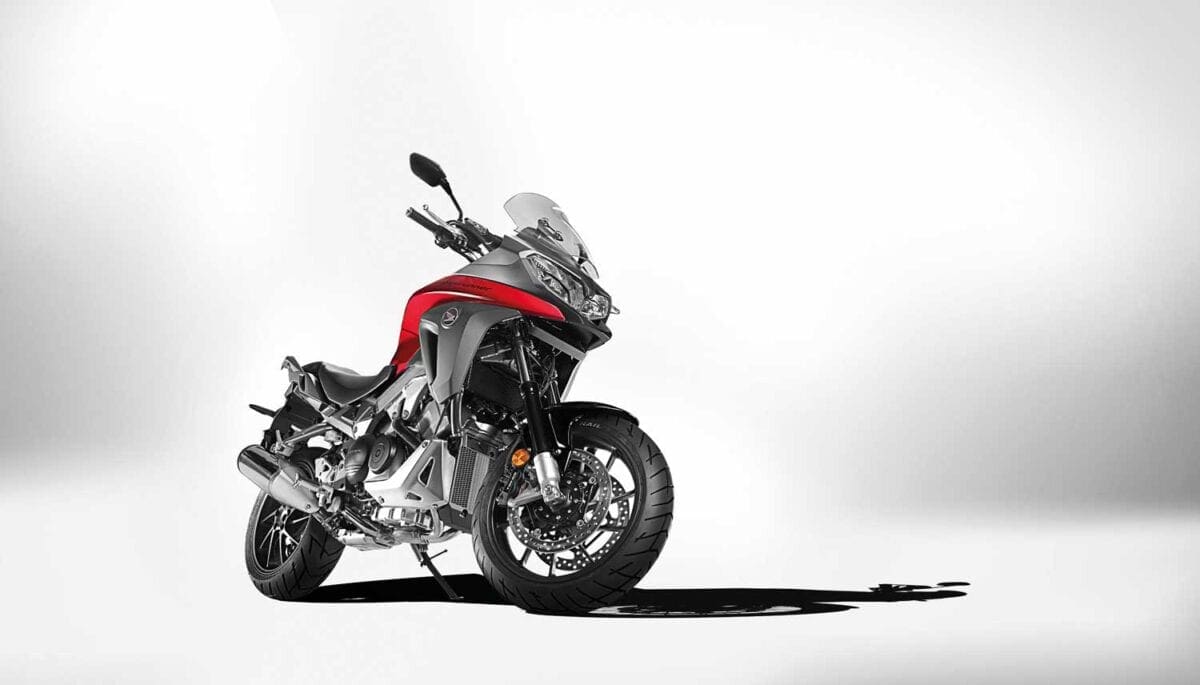 Agile handling is key to the VFR800X’s philosophy as it has to clip Alpine apexes as well as it rides through busy city streets. The VFR800X’s suspension is similar to the 2014 VFR800F but the 43mm Honda Multi-Action System (HMAS) telescopic fork features an extra 25mm travel and offers stepless spring preload adjustment plus rebound damping adjustment.

The diamond triple-box section aluminium twin-spar frame is unchanged but uses a revised, lightweight die-cast aluminium subframe with integrated pannier mounts. Rake is set at 26°30’ with trail of 103mm and 1,475mm wheelbase. Kerb weight is 242kg.

As important as the agile chassis, a willing and responsive powerplant is a major part of the VFR800X’s appeal. And its 782cc, liquid-cooled 16-valve DOHC 90° V4-VTEC engine serves up improved performance and now generates more low-to midrange power and torque. Boosted peak power of 78kW (106PS) is delivered at 10,250rpm and the increased torque output through the bottom and mid-rpm ranges is immediately noticeable. Peak torque of 75Nm is delivered at 8,500rpm.

HYPER VTEC operates only one pair of inlet/exhaust valves per cylinder at low rpm, switching to four as revs rise. The transition from two to four valve operation has been refined for 2015 and combined with the uprated torque the effect is a strong and completely linear power delivery and instant acceleration.

Bore and stroke is 72mm x 48mm, with compression ratio of 11.8:1. The PGM-FI fuel injection – with 36mm throttle bodies – has been remapped to suit the engine’s new performance parameters and fuel economy of 44.2mpg (WMTC mode). The new mass-centralised 4-2-1-1 exhaust has been revised both externally and internally to assist the uprated torque output while retaining a strong rush of power at higher rpm. Shorter exhaust downpipes ensure the catalyser heats rapidly for maximum efficiency.

New dual radiator units are smaller, with increased core density (a design used by the RVF RC45 homologation race special) and are sited at the front of the engine rather than either side as before, making for a slimmer feeling motorcycle that’s easier to manage. The upper radiator and air guide (located on the left of the engine) work together to channel consistent airflow into the large funnel feeding the airbox.

The system is operated from the left handlebar and features 2 modes of operation, plus off. The default setting when the ignition is turned on is mode 2 – the maximum amount of torque reduction. From this start point mode 1 can be selected; it offers less system intervention and the HSTC can be switched off completely if desired. If HSTC intervenes the rider receives an alert from a flashing high-intensity ‘T’ indicator located in the dash.

A quickshifter is available as a Honda Genuine accessory. Operated by a shift switch attached to the gear lever, it plugs directly into the ECU and on detection of an upward gear change momentarily restrains the engine’s fuel injection and ignition, allowing the next gear to slot instantly home. It works seamlessly in everyday riding and touring – reducing fatigue – and offers faster gear changes during sporty, full-throttle upshifts.

A smaller starter motor saves weight and the high-efficiency generator is rare-earth magnet free and provides more than enough electrical power for the heated grips and other accessories. 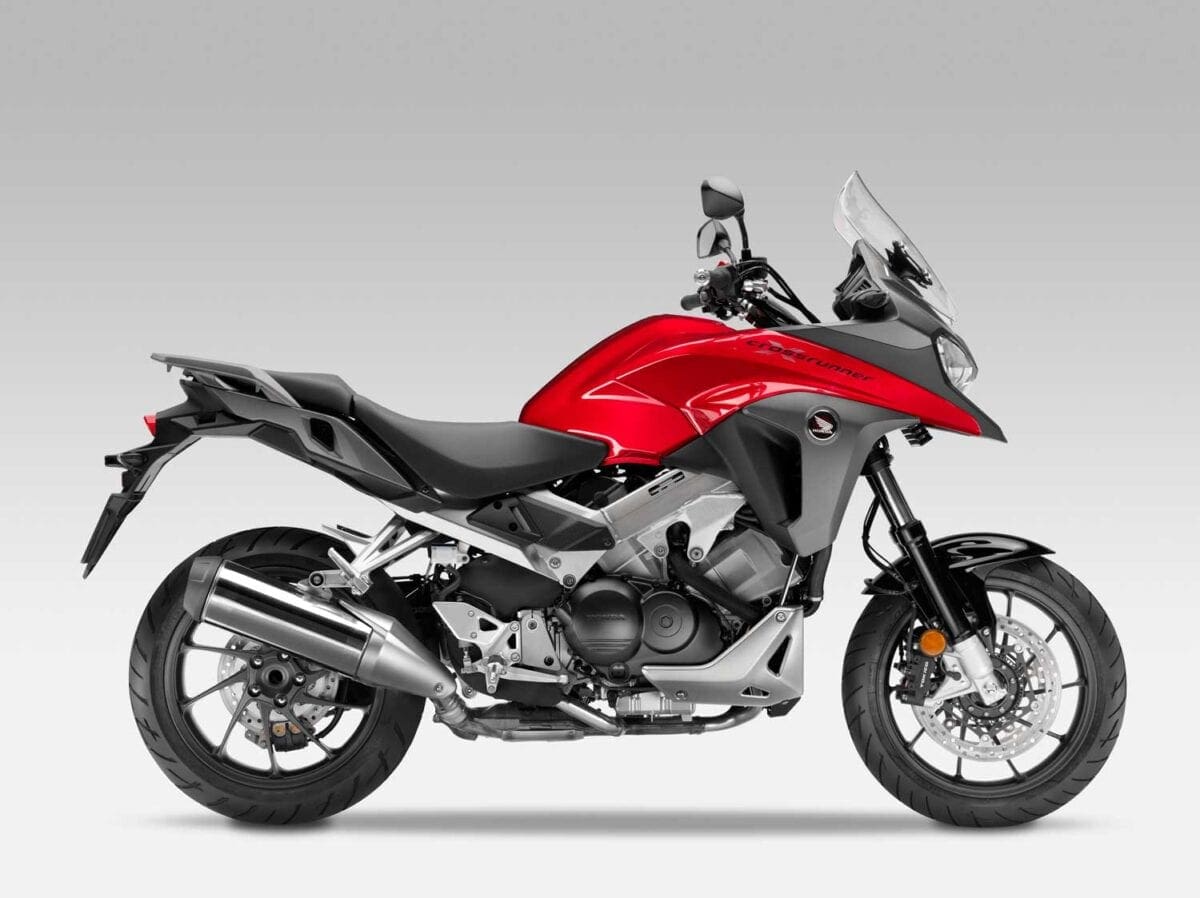 A range of Honda Genuine Accessories are tailor-made for the new VFR80X and include:

The new 2015 VFR800X will be showcased in the UK at Motorcycle Live between 22nd – 30th November 2014 and available through Honda UK Motorcycle dealers from early December. 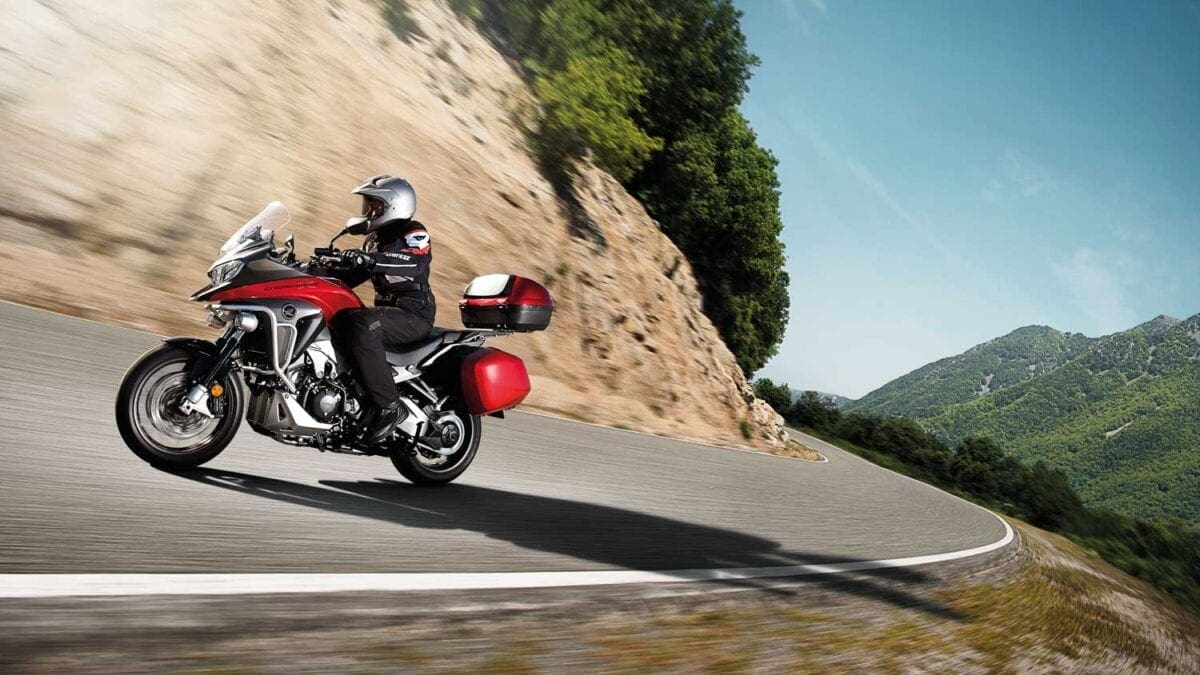