Motorcyclists’ knowledge of road safety is almost twice as good as that of car drivers, a new study has revealed.

More than 60% of riders know what the safe stopping distance is in rainy conditions at 30mph – 150 feet – compared to 34 per cent of motorists. And those on two wheels are also much better at recognising road signs, according to the poll by motorbike insurance specialists Carole Nash. 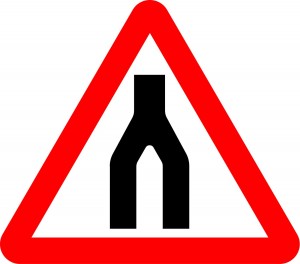 No, it doesn’t mean beware of bandy legs

Two thirds of motorcyclists (67%) recognised the sign for the end of a dual carriageway, whereas just 37 per cent of drivers got the answer right.

Given 12 road signs to identify, car drivers finished behind riders in eight categories.

Motorcyclists were best on ‘dual carriageway ends’, ‘junction on bend ahead’, ‘minimum speed’ and ‘road narrows on both sides’. Their knowledge also proved better on ‘motor vehicles only’, ‘start of motorway’, ‘slippery road’ and ‘maximum speed’. Car drivers scored best on ‘no motor vehicles’ and ‘end of controlled parking zone.’

Rebecca Donohue, Head of Marketing for Carole Nash, said: “Once Autumn starts the rains begin and it is vital to have knowledge of road safety. One of the reasons motorcyclists score so highly is they have to have their wits about them at all times. It’s an exhilarating way to travel but it can also be dangerous unless you are aware of everything around you and the rules of the road.”

Safety and Training Director for the Motorcycle Industry Association, Karen Cole, commented: “This also adds to a growing body of evidence which substantiates something riders have known for years – that those who’ve ridden or ride a motorcycle make better car drivers.

“Transport Minister Robert Goodwill has stated that he thinks starting a road career on a moped is beneficial to long term safety too, and we believe that if more people rode a motorcycle, scooter or moped, even for a short period, they would contribute to better long term safety for all road users.”