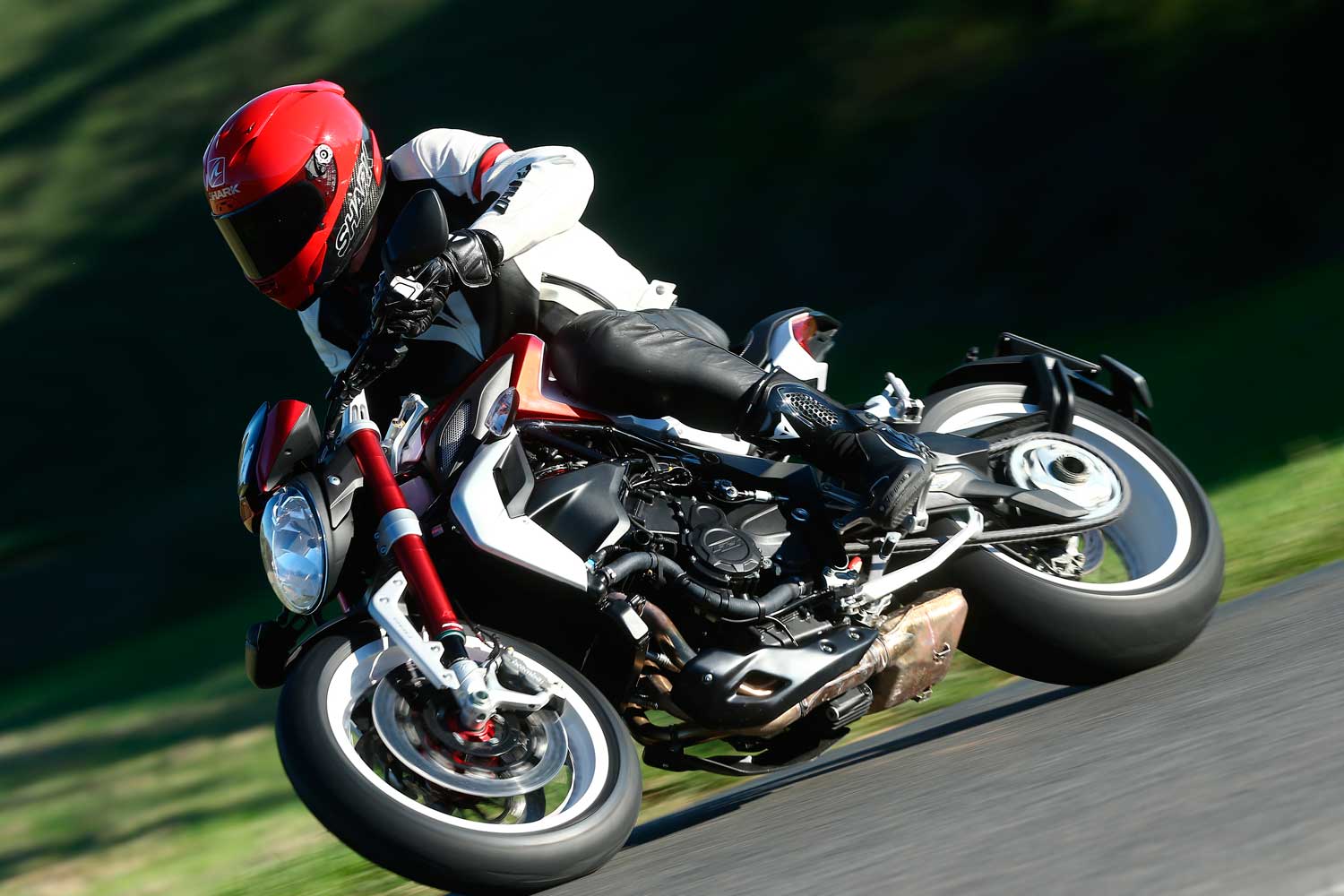 Tested by Roland Brown. Motorcycle Journalist and former international racer, Roland Brown is one of the world’s most respected bike testers. Subscribe to his fantastic YouTube channel – iMotorcycle Video – here. Photos by Milagro

MV Agusta found itself with an unexpected hit after launching the Dragster 800 at the start of this year. Essentially a slightly more radical version of the Brutale 800 equipped with new handlebars, a one-plus-one seat and fatter rear tyre, the Dragster captured the imagination and snarled out of showrooms as fast as the firm from Varese could produce it, despite a higher price.

That success helps explain MV’s decision to push things further with two even more outrageous follow-up triples. The first is the Brutale RR, a hotted-up version of the Brutale 800 with more powerful 140bhp engine, firmed-up chassis and MV’s most sophisticated electronics package yet. Alongside it is the Dragster RR, which updates the Dragster in similar fashion and adds a pair of uniquely eye-catching wire-spoked wheels. 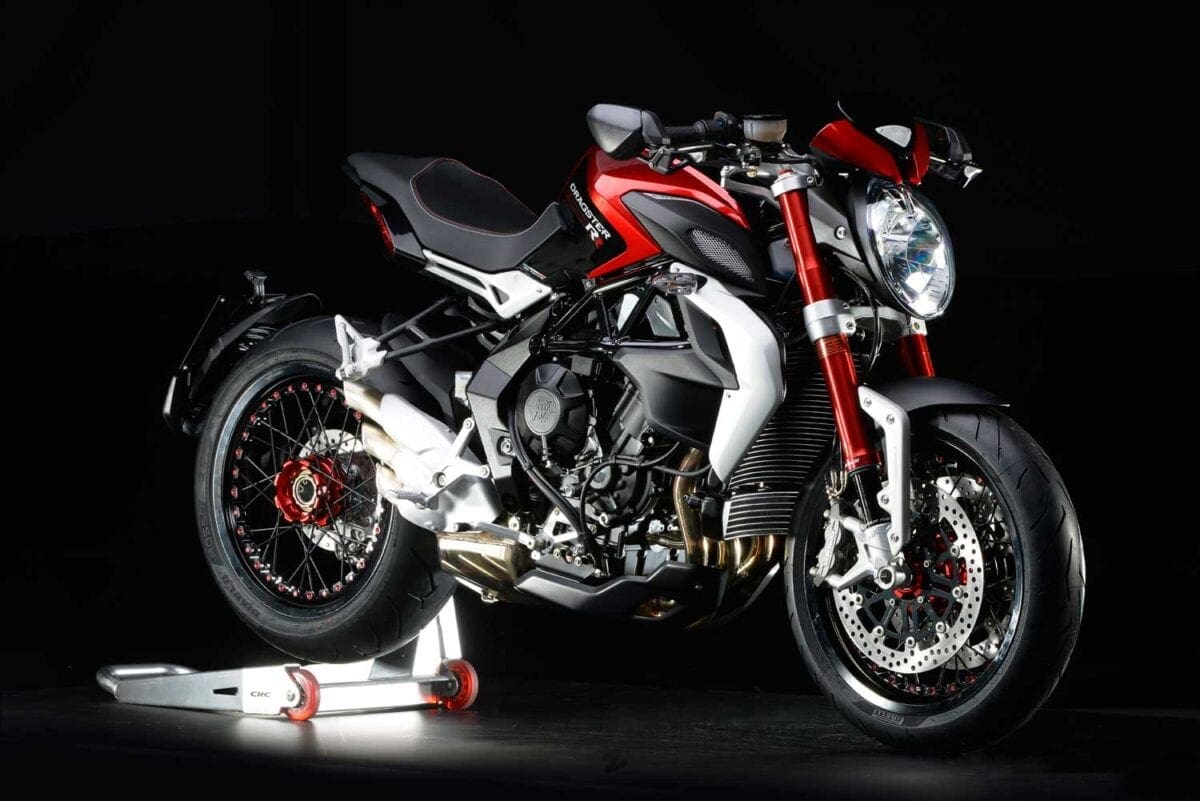 The two RR models share the latest version of MV’s 798cc three-cylinder engine. The 12-valve unit with its contra-rotating crankshaft is mechanically unchanged, but its intake system is revamped with a reshaped airbox, larger 50mm throttle bodies and twin instead of single injectors per cylinder. The three stubby silencers look unchanged but they’re tweaked to breathe more freely. The result is increased midrange torque, and a 15bhp boost in peak power to a maximum of 140bhp at 13,100rpm.

These triples’ electronics package is subtly updated and features a significant addition. Alongside further revised fuelling incorporating four riding modes, one of which is customisable, the RR models are fitted with a standard fitment quick-shifter which, in conjunction with the slipper clutch, allows clutchless changes on both up- and down-shifts. Like the standard Brutale and Dragster, the RR models get an eight-level traction control system, adjustable via a button on the left bar. 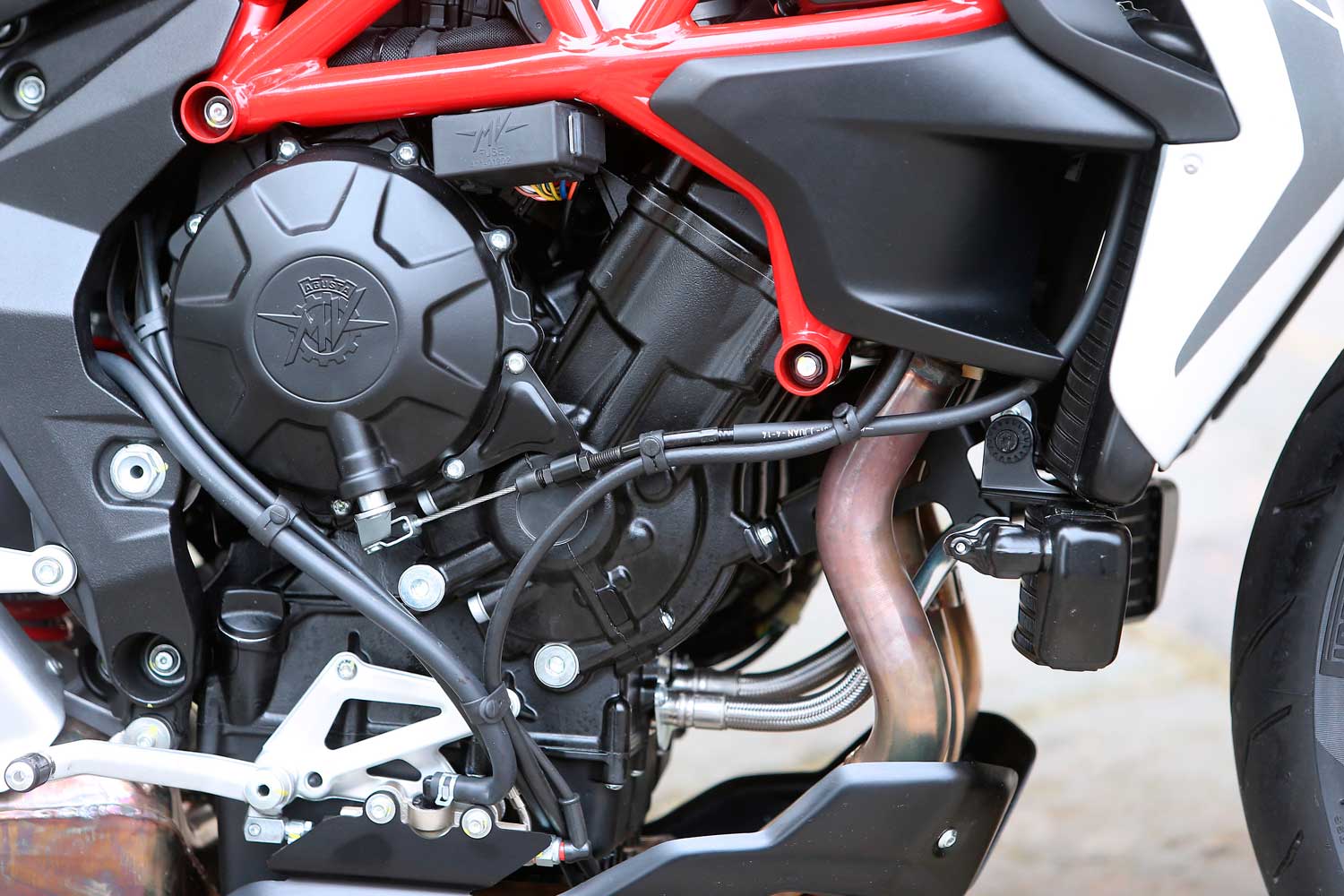 There’s no change to the basic chassis layout, based on a compact steel-tube-and-aluminium frame and single-sided swing-arm. Suspension at both ends is firmed up slightly to cope with the extra performance, the Dragster RR’s slightly more so. Forks are new 43mm USD Marzocchis with lighter, gold-anodised sliders, and super-tough DLC (Diamond-Like Carbon) coated stanchions that are also made from aluminium, saving a total of over a kilo in weight.

The Dragster RR gets new five-spoke cast wheels but the outstanding feature of either bike is arguably the Dragster RR’s pair of wire-spoked 17-inchers, which are like nothing previously seen on a streetbike. Manufactured by a Milanese firm that normally supplies the auto industry, the wire-spokers are slightly heavier than the standard cast wheels but have less inertia, due to more of their weight being in the machined-from-solid aluminium centres.

Both models also feature an uprated brake system that combines Brembo four-pot radial calipers with Bosch ABS, incorporating an anti-stoppie function called RLM (for Rear wheel Lift-up Mitigation). The Dragster RR uses the standard model’s bar-end mounted mirrors, which are too wide in traffic but give a better view than the Brutale models’ conventional mirrors. 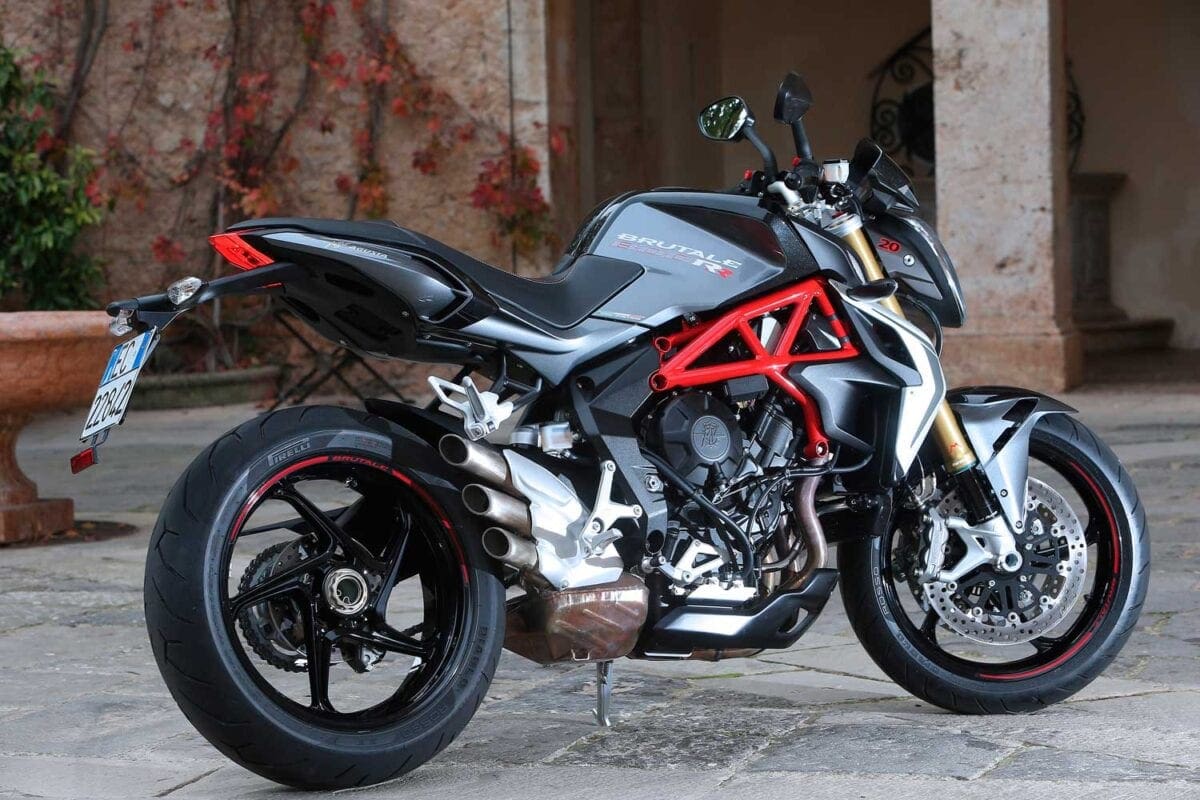 If you’re looking for a nice, rider-friendly middleweight then steer well clear, but if you’re an experienced rider looking for something quick, light, stylish and exciting then the MVs have got to be on your short-list. Neither is remotely practical, especially the Dragster RR with its one-plus-slim-one seat, and their firm suspension can make life tricky on a bumpy road. Like all MVs they’re not designed to be cheap, either. The Brutale RR costs £11,599, which is £1800 more than the standard Brutale 800. The Dragster RR’s fancy wheels contribute to its higher still price of £13,299 (against the standard Dragster’s £10,999).

But how do you put a price on the exclusivity and unique Italian style of the Dragster RR? Both triples are beautifully styled and finished, and they’re seriously rapid too. That revised 798cc motor is gloriously smooth and powerful, has heaps of character and sounds wonderful. The chassis are light, agile and taut. If you want unmistakable looks, straight-line performance and charisma from a naked middleweight, the Dragster RR is the current state-of-the-art, and the slightly more sensible Brutale RR runs it a close second. 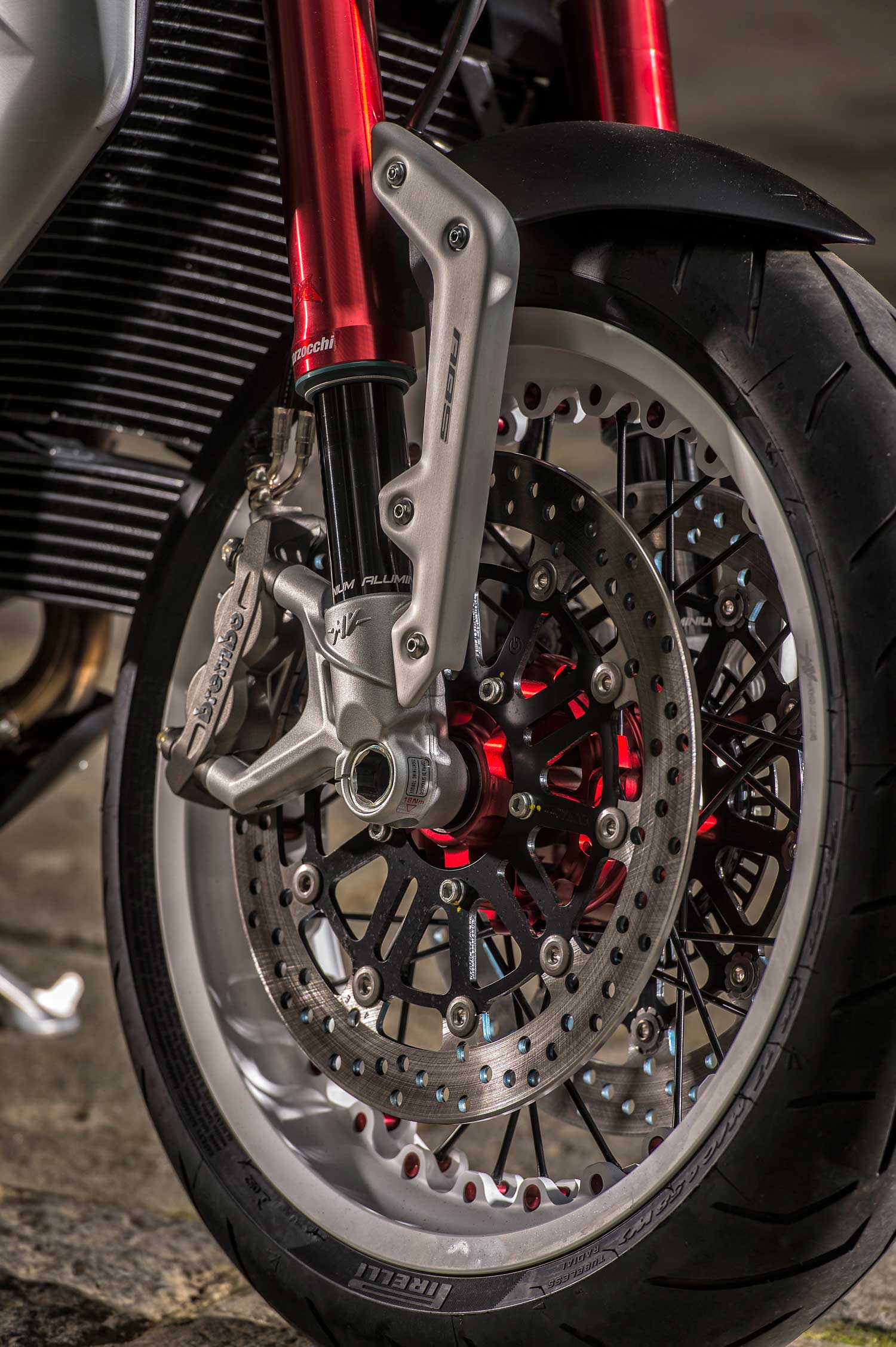 In a word, exciting. There’s never a dull moment on either of these powerful, responsive and firmly suspended machines. In a straight line there’s very little difference between the two. With that 140bhp output, ample midrange torque and short 1380mm wheelbase, a tweak of the throttle is enough to send either MV shooting forward enthusiastically as the smooth-revving triple motor responds to every command, helped by fuelling that was good, apart from slightly uneven running at about 5000rpm in town.

The three main engine modes are Sport, Normal and Rain, and can be selected very easily using the starter button. Even Normal gives seriously crisp throttle response and fierce acceleration, backed up by a soulful howl from the pipes down by your right boot as you flick through the box with the ride-by-wire throttle on the stop. It’s vital to grip the bars tightly and keep your weight well forward because both bikes are seriously lively and very keen to launch into spontaneous second-gear wheelies, which adds to the entertainment. 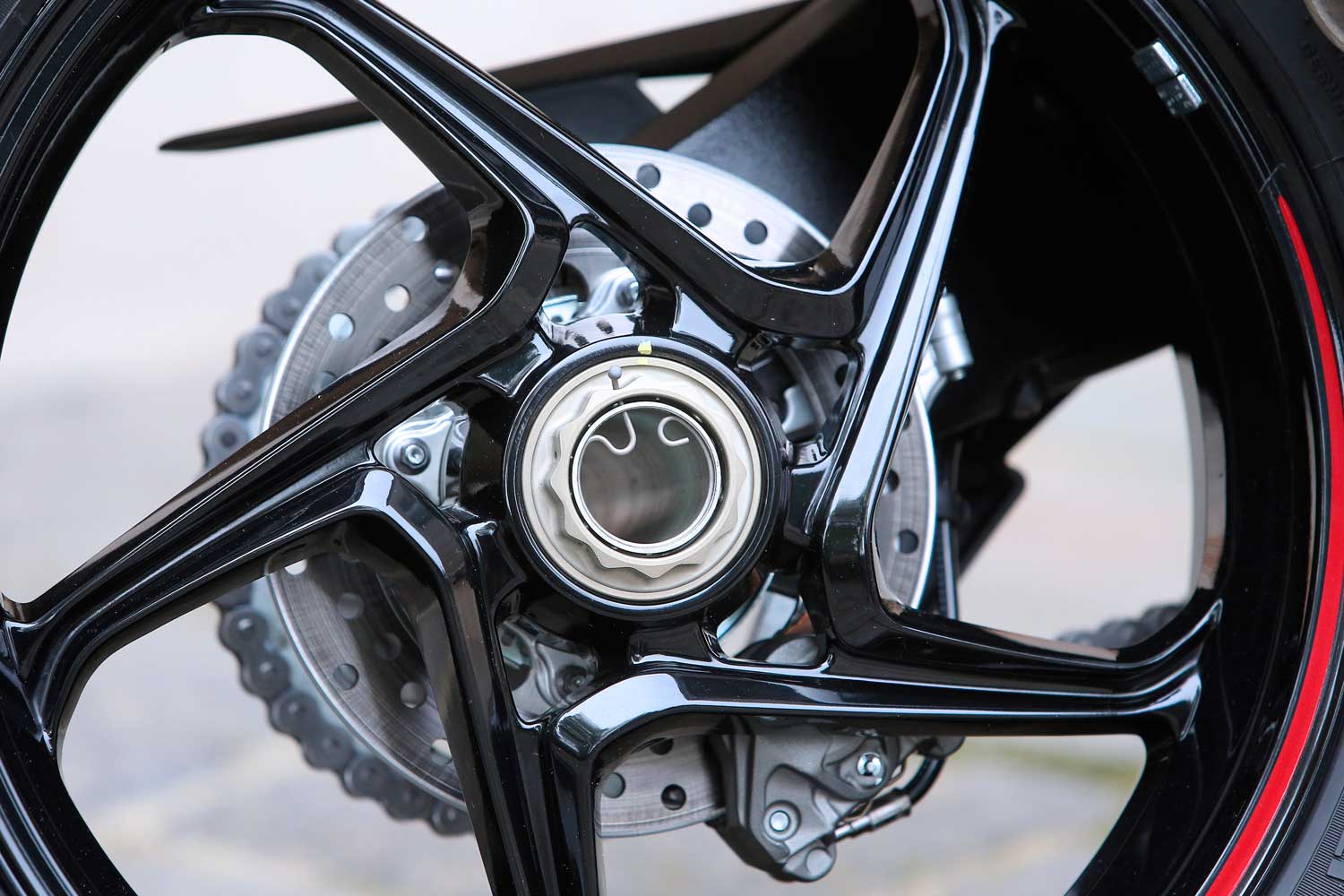 Of the two the Dragster is better in this respect because its short and distinctively shaped seat holds the rider well forward on the bike, with lots of weight over the front wheel. However the seat doesn’t allow you to move around much or hang off the bike easily, which I found restricting in corners, especially because I’m tall. And being unable to shift my weight rearwards didn’t help under braking. The Brembo set-up gives superbly powerful stopping but I found the Dragster RR’s ABS cutting in slightly more often than expected, presumably because it was trying to prevent the rear from lifting. 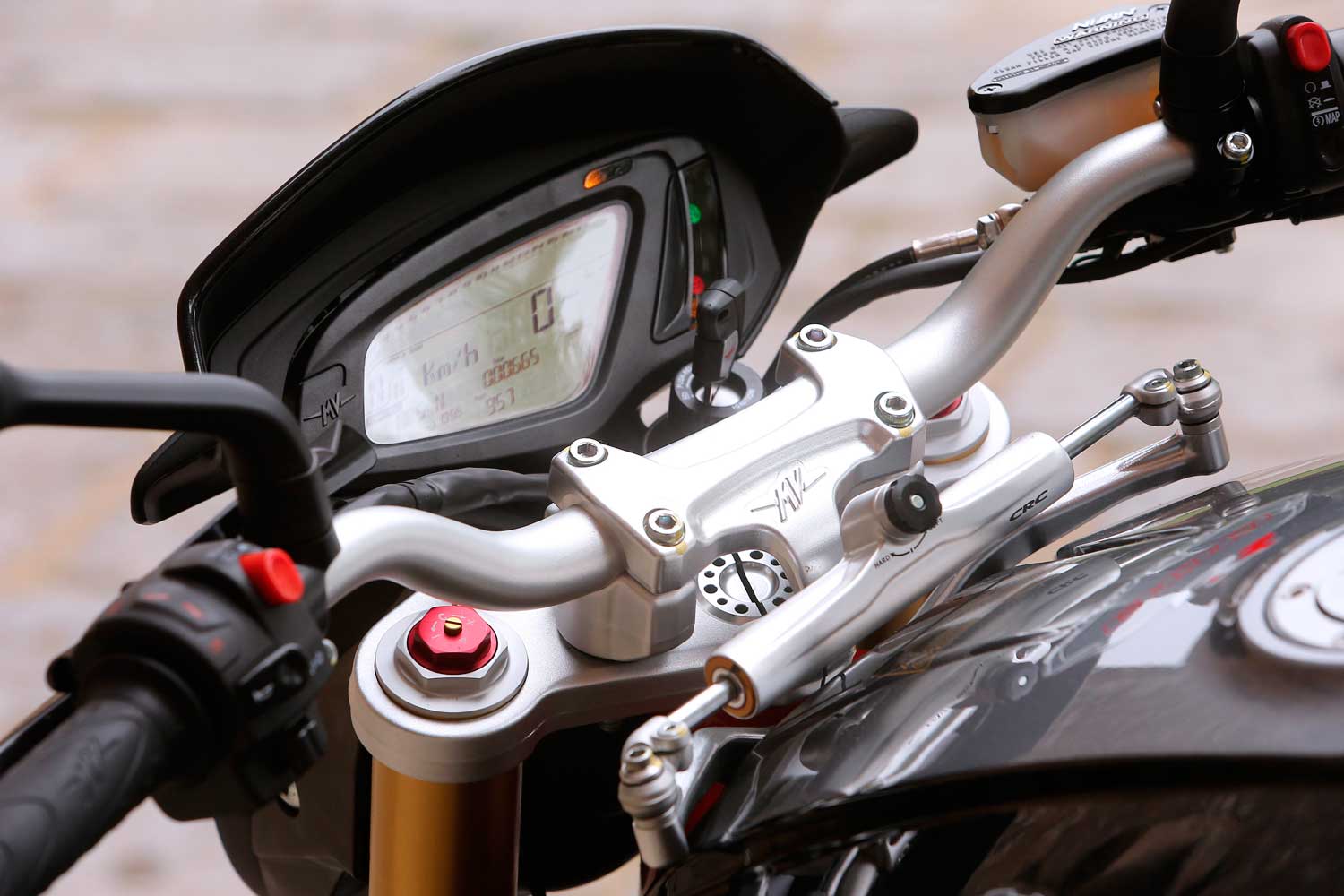 One electronic aid that worked flawlessly was the new quick-shift auto-blipper, which allows clutchless changes both up and down through the six-speed box. This was excellent on both RRs, as with BMW’s latest S1000RR, giving reliable and very quick down-shifts with minimal effort. The blipper is enabled with Sport mode and you can also use it with the other riding modes via the Custom function, which allows you to select from any of the settings for throttle response, engine braking and more.

Both these bikes have excellent chassis, with identical steel-and-aluminium frames, high quality suspension and racy geometry. With a shared 168kg dry weight figure they’re both seriously light too. That makes for agile and responsive handling but both triples’ Marzocchi forks and Sachs shock are set up firm, which made the MVs hard work at times on some very bumpy roads in Tuscany. 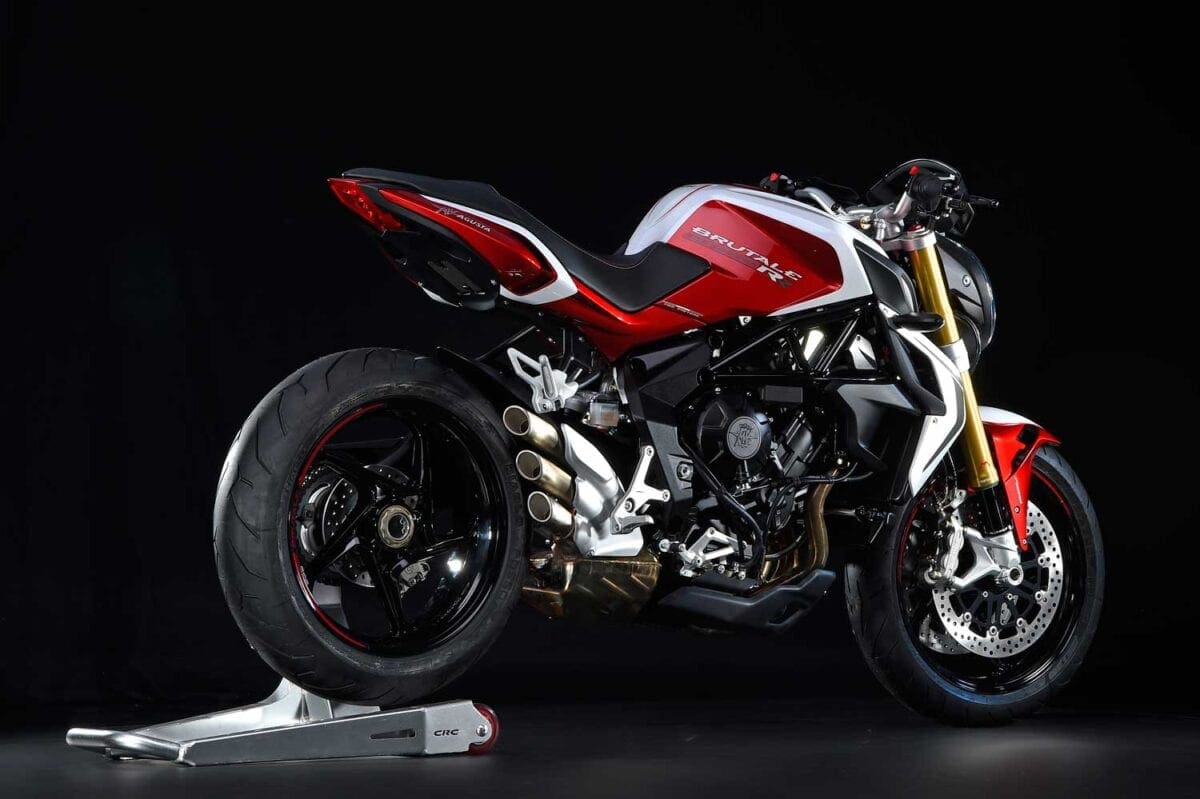 Either bike would probably have been very much at home if we’d been allowed a few laps of the nearby Mugello racetrack but they struggled at times as the firm suspension passed on every imperfection to the bars and seat, sometimes so much that it was difficult to keep precise control of the light-action throttle. The Dragster, with its firmer suspension and fatter, 200-section rear Pirelli, was affected more. At least both bikes have an adjustable steering damper, which helped keep the bars pointing in the right direction as the front wheel went light under acceleration out of the bends.

The Dragster’s fat tyre put plenty of rubber on the road, too, and even the Brutale RR with its 180-section rear Pirelli Diablo Rosso II was not short of grip. Neither bike was remotely relaxing but both provided plenty of entertainment on straight and twisty roads alike. And there’s not much point in complaining about the Dragster’s rear tyre compromising its agility, because like the cut-down seat it wasn’t intended to be sensible or efficient, it was put there mainly to add to the bike’s sense of drama and style, which it undoubtedly does.

There are plenty of bikes that would have covered those bumpy roads more calmly; some even faster too. But not many would have turned more heads, been more fun or dumped more adrenaline into my bloodstream than MV’s pair of bad-boy naked triples. 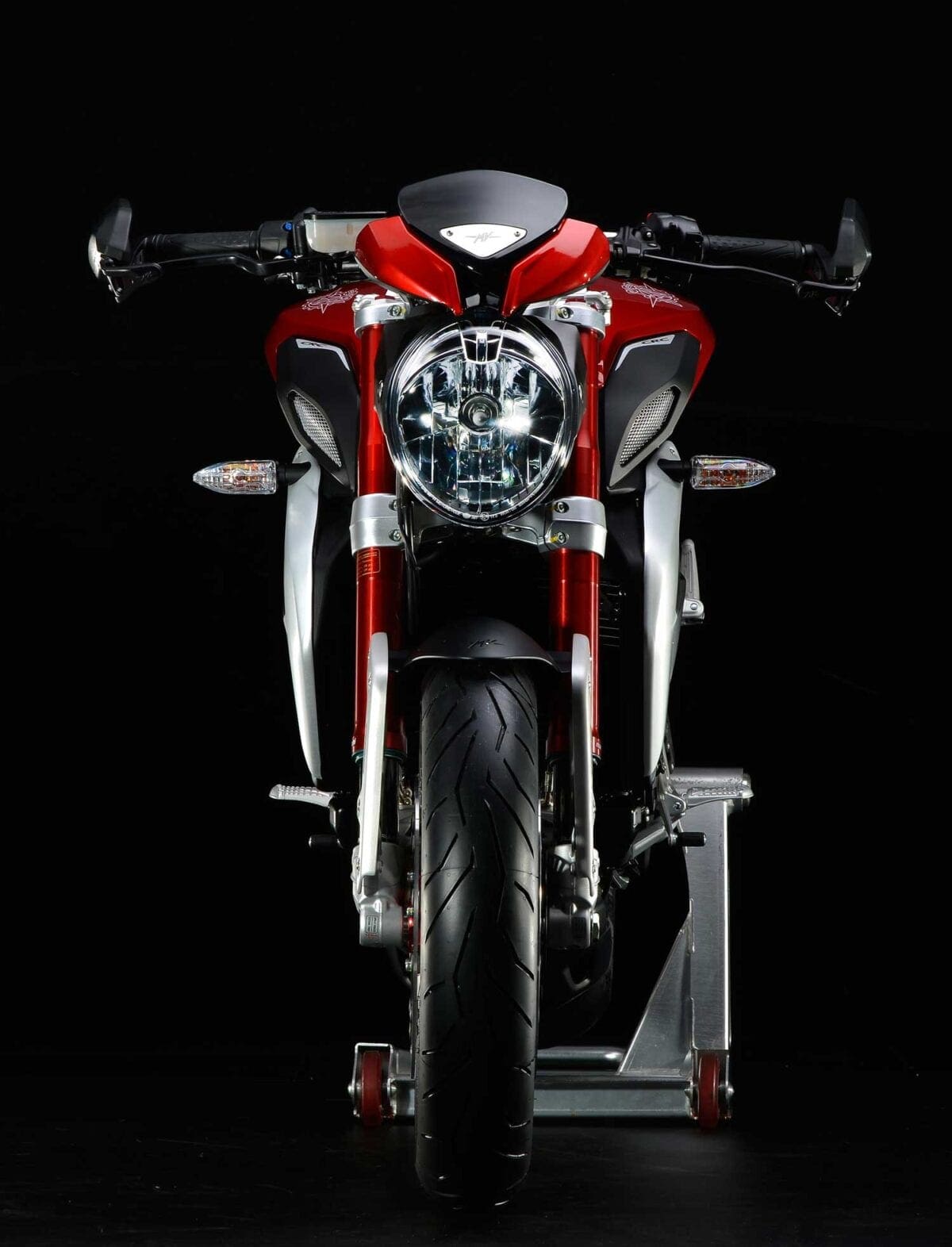 “At EICMA we’ll present a completely new model, a light tourer for city commuting, as well as the final version of the Turismo Veloce [sports-touring 798cc triple] that we presented last year as a concept. Those are new sectors for us and they will help us increase our sales a lot. But MV will never make cheap bikes. We are a niche, premium company that stands for quality, performance and design.

“That investment will be in the four-cylinder platform, which we’ll renew completely. Not just in the Brutale and F4; we’ll move to a complete model range like we did with the three-cylinder bikes. So we’ll have 600cc up to 1100cc, with a model in all the categories. And we are also investing a lot to develop the dealer network, which is very important to us.” 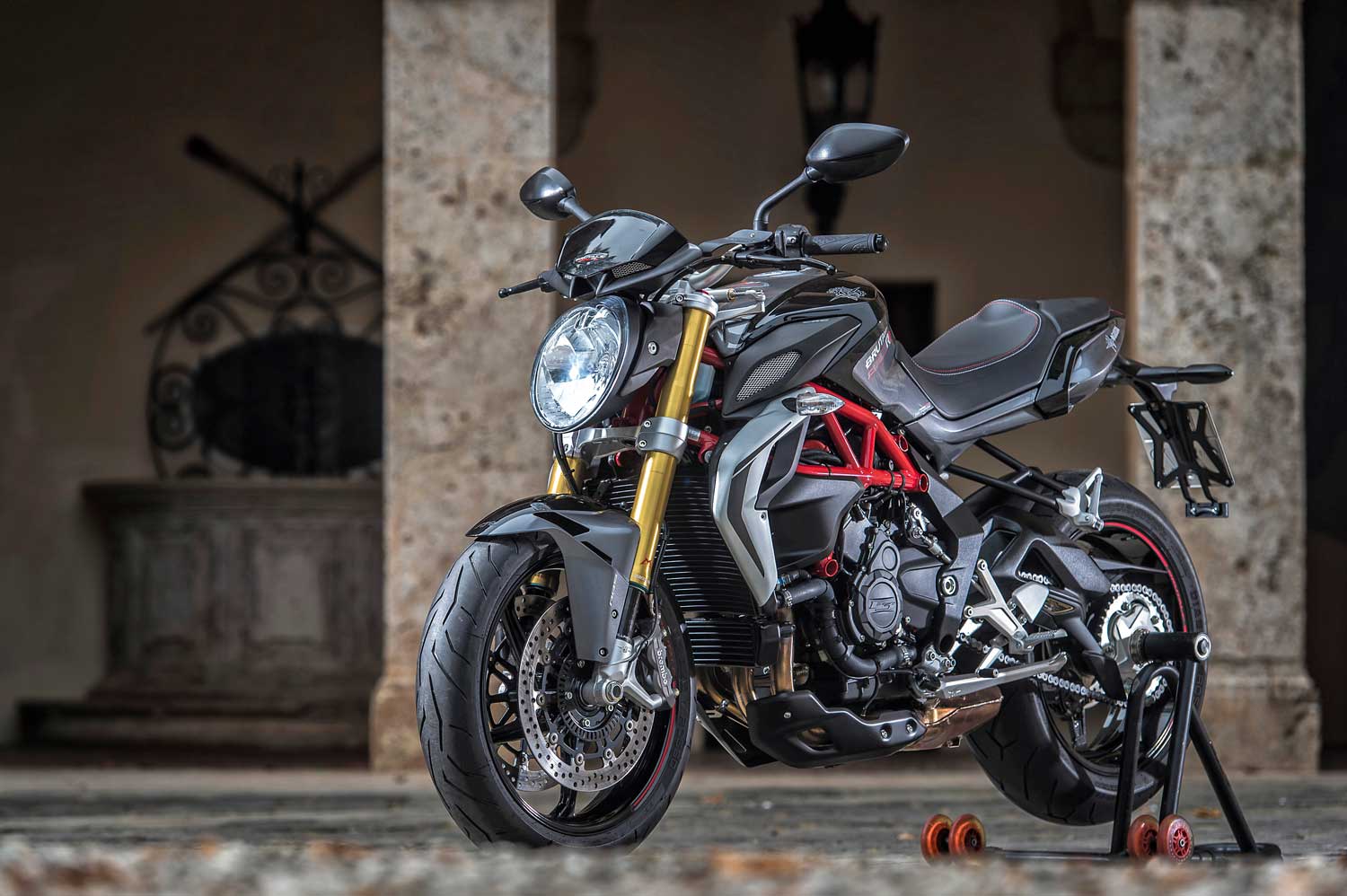