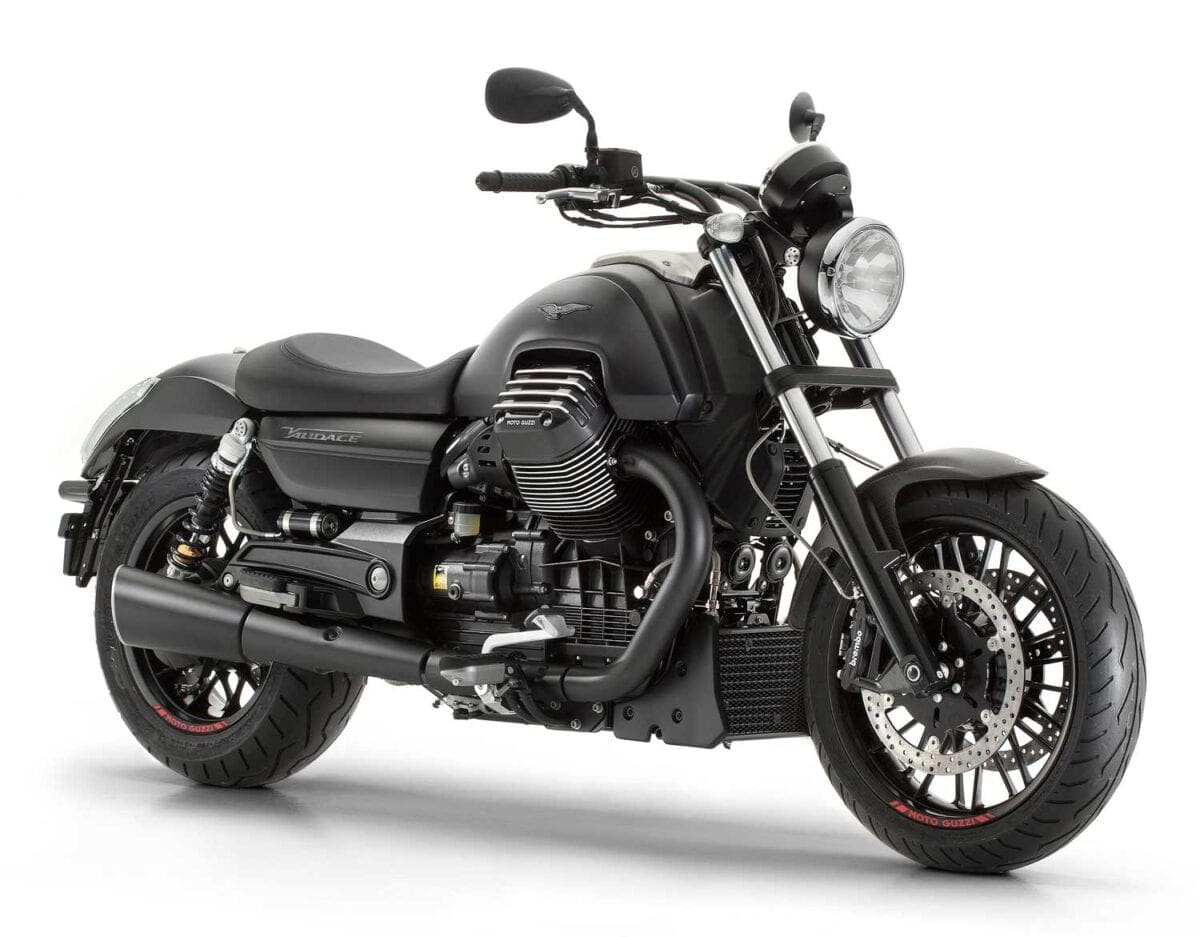 The new Moto Guzzi Audace uses the 1400cc engine in a darkly-styled, sportier machine. Here’s what the press release had to say…

Ostentatious, muscular and fierce, the Audace can be picked out immediately by its front end, made stylistically lighter by the circular headlight unit and the carbon mudguard mounted on a fork without any telescope covering. It has no chromium plating so every mechanical detail, each small exposed metallic part is dark as night, an ideal condition for fully enjoying a bike in solitude with the striking beauty of the Audace.

Light comes through only in the stark contrast with the colour of the lateral strip that shows several brand new details. Like the undersump lug that gives the side view a gritty look, the metallic radiator grille and the short megaphone exhaust which, despite its rebellious look, is actually Euro 4 approved.

The side panel covers have also been changed, lightened like the passenger footpeg bracket. The platform footboards mounted on all the other models in the range are gone here, as is the rocker gear shift control in order to make room for sportier footpegs mounted farther forward and the classic gear shifter pedal.

Particular attention was given to the saddle, covered in Alcantara skai with exposed red stitching, lowered in terms of the seating position and installation ready for the foldaway passenger seat. The drag handlebar is also new which, thanks to the forward position of the footpegs and the different seating level, create a longer and more dominating riding position.

Another particularly elegant feature is the burnished valve covers, the rear shock absorbers with separate gas bottle and the alloy wheels personalised with the Moto Guzzi logo, as well as the minimal mirrors.

Powerful and aggressive, the Audace looks as if it is crouched down on its haunches like a large feline ready to unleash its explosive power to scratch the asphalt, leaving the mark of its oversize 200/65 rear tyre. The generosity of the 1400 cc “Made in Mandello” 90° V-twin is well known by now and on the Audace, thanks to the exhaust system with redesigned fluid dynamics, is even more lively at high revs. As a result, thanks in part to weighing a few kilos less, the Audace is definitely quicker off the line. It will certainly be the one that is most used with the “Veloce” output map and the one where the MGTC traction control system will need to intervene most often…