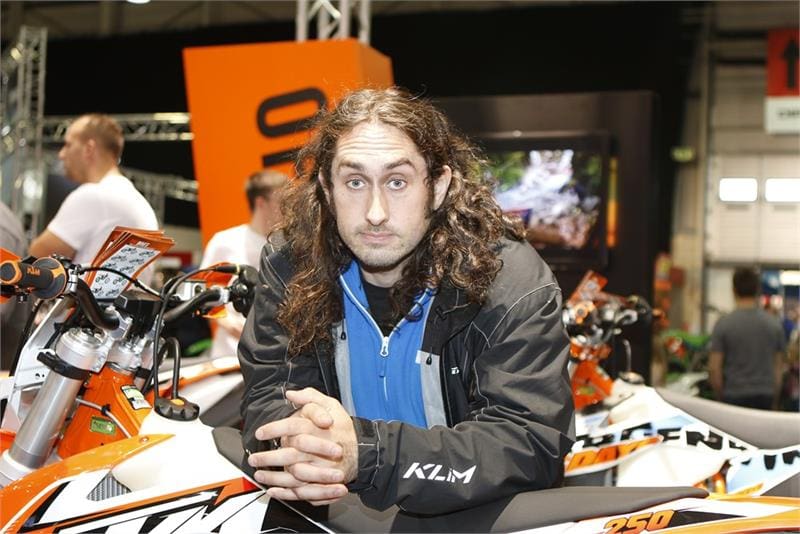 Comedian Ross Noble popped into the 2014 International Dirt Bike Show and talked of his passion for motorcycles and all things off-road.

“To say I’m a fan of off-road is an understatement,” he enthused. “I love all bikes, but really prefer riding enduro and trials.” Noble has taken his enduro craving to extreme levels, competing in the Red Bull Romaniacs, the Roof of Africa, and more recently, after five long years of trying, he won the clubman class of the gruelling 24-hour Dawn to Dusk enduro event held in South Wales. “A mate and I first entered the event as a joke. We saw there were only three teams entered in the expert class and so our thought process led us to the conclusion that one of the teams would surely drop out and so we could get on the podium. It was torturous and my mate vowed never to be so stupid again. I was determined to crack it and now I have, I think I’ll retire on a high note.”

Next up on the Noble-challenge-agenda is the Heads of the Valleys two-day extreme enduro in December, which he’s fitting in between touring. “I finish the tour on the 12th of December and don’t restart until the end of January 2015, so I reckon that will give me enough recovery time in case I smash myself up….”

When not racing enduro, Noble indulges in his other passion of trials riding on board a Gas Gas 250. “It’s the perfect pastime as I can take it at my own pace and sometimes will be out riding three to four hours a day.”

Noble was on a mission at the International Dirt Bike Show to find pink riding gear for his six-year old daughter who is now the proud owner of an Oset electric trials bike.