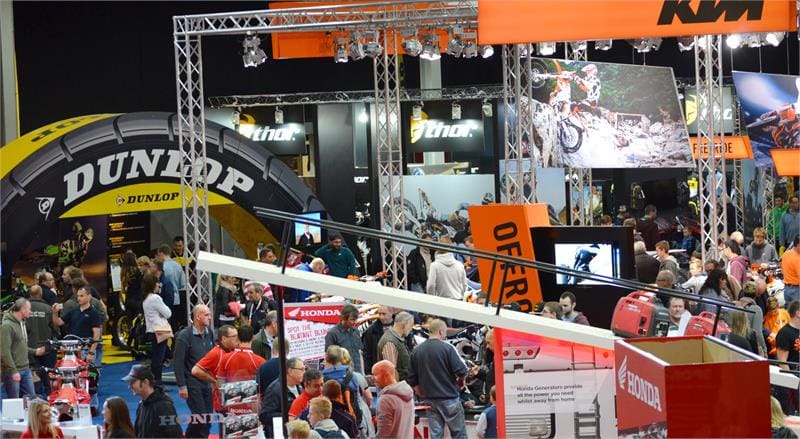 The 2014 International Dirt Bike Show at Stoneleigh Park closed its doors on Sunday the 2nd of November, on what was considered by many to be one of the most successful shows yet.

The Show was slightly ahead of last year in terms of visitor attendance which, when coupled with the fact that 2013 had shown significant growth, is always a healthy sign for any event. Away from the number crunching though, the bigger picture was one of a vibrant, and entertaining all-rounder, providing a high-quality shop-window for the industry. This, coupled with positive feedback from show fans, many of whom cited astonishing value-for-money as being high up on the list, was reason enough for the Show organiser to quickly confirm it will return to Stoneleigh Park in 2015 with another four-day exhibition, from Thursday the 29th of October through to Sunday the 1st of November.

As the 2014 show doors closed, existing exhibitors were thinking ahead and talking about increasing stand space for next year, whilst enquiries from new companies looking to join the Dirt Bike Show cause are already starting to flood in.

Popular comedian Ross Noble took time out from his busy schedule to get his off-road fix and the event verified its International tag with high-profile teams keeping their 2015 international rider signings under wraps until they could be announced at the Show. A number of first-look product launches were in evidence around the Stoneleigh Park halls and media from BBC television and radio, as well as various film crews and global magazines all descended on Europe’s largest off-road show to help spread the dirt-biking word.

On the exhibitor front, all major off-road manufacturers were represented and the impressive stand builds certainly created the wow factor as soon as show-goers stepped foot inside the main hall. Exhibitor competitions too were in abundance, with fans eager to enter and win some high-end prizes. The retail hall was buzzing and departing visitors laden with purchases certainly looked like they had enjoyed a good shopathon.

So, the traditional elements of a motorcycle show were clearly apparent, but the International Dirt Bike Show has become synonymous with looking beyond the norm and this year didn’t disappoint. The have-a-go kids’ activities proved to be a massive hit, as did the Live Action with the on-stage Extreme MTB Show, hall four Flat Track and Inch Perfect Trials performances and out-front Wall of Death. Over the weekend, the MiniBike Supercross provided uncompromising, fast and furious racing.

Summing up the 2014 event, Show organiser Nick Mowbray said; “The overwhelming feedback from visitors and exhibitors is that the Show delivered on its promise, providing something for the whole family. It was gratifying to see that, on most days, the halls were busy right up until close of play and we’re also pleased to hear that the attending charities did well with their fund-raising.

“We were blown away with the number of people who were happy to spend a little time completing our visitor surveys and we do take feedback into consideration. No matter how good a show is, there is always room for improvement and the planning starts now for the 2015 International Dirt Bike Show.

“We now look forward to welcoming new and returning fans to Stoneleigh Park next October.”