We’ve just ridden for an hour through the most stunning scenery, round beautiful corners, and on the best surfaces. It’s baking hot, and we’re stood in a service station forecourt eating ice creams.

“What was that road we just did?” I ask. “I know,” said Tyler, “It was the best f#%king road in the World”. It’s also known as the A87 past Loch Garry and Loch Loyne, in Scotland.

I’d never been this far north in the UK – family holidays (by car) had only reached Loch Lomond, but by God, the roads around Glencoe, Inverness, Ullapool and Applecross and un-bloody-believable.

My mate’s Dad, Mike Hardy, planned the route for our lad’s bike holiday. A life-long biker and a truck driver, he knows ever bump, every pothole, and every perfect corner in the country. We met from a local bike dealer one Thursday morning: me on the Kawasaki Z1000SX; Mark on his Triumph Tiger; Dave on his Yamaha R1; Tyler on his Kawasaki ZX-9R and Mike on his Triumph Trophy. 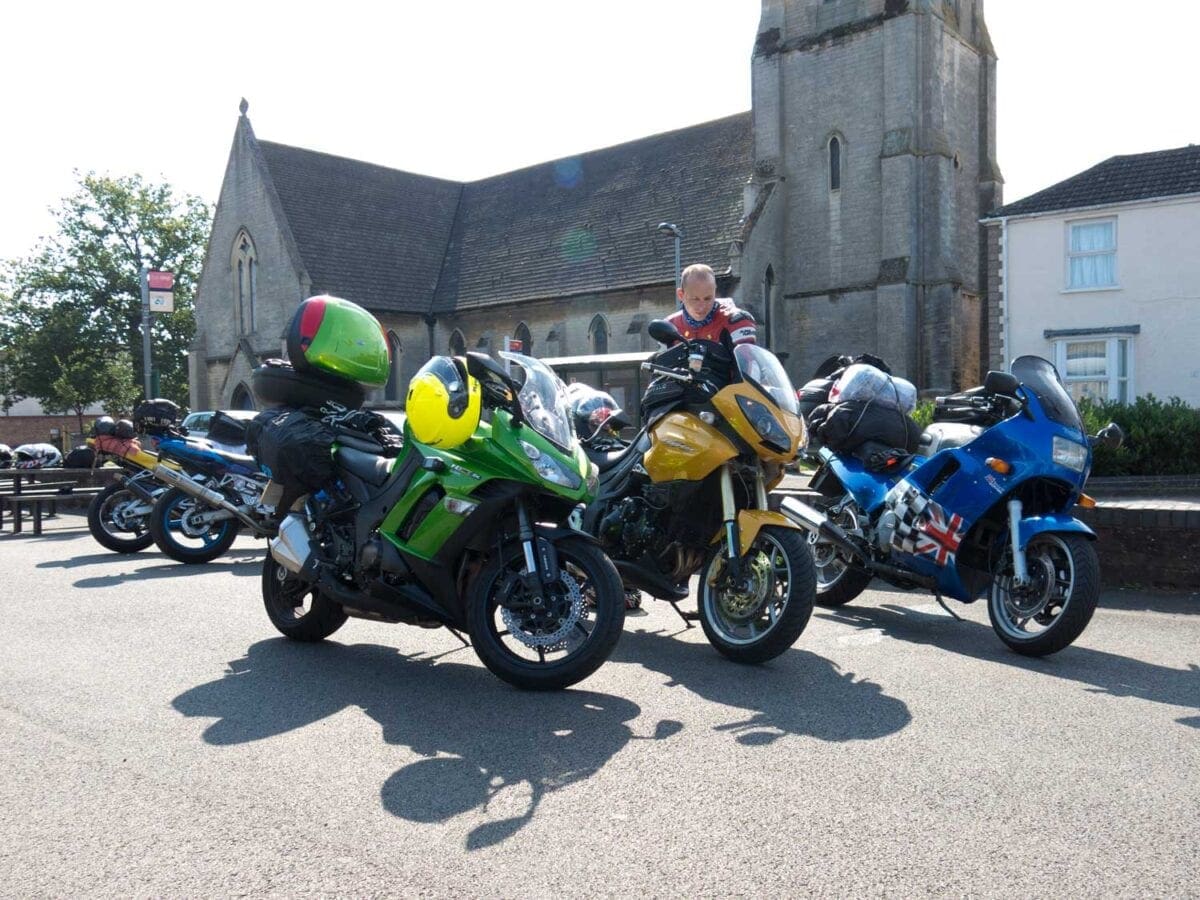 Packed, and ready to go…

The first day’s riding was inevitably a lot of motorways – we weren’t on this trip to explore England, we wanted the good stuff in Scotland. The Zed was, of course, faultless, and once I’d learned that I needed to flex my bum muscles every twenty minutes or so, the gel seat provided plenty of comfort. No buffeting from the screen, stable despite a top-box crammed with gear, and my only disappointment being that Kawasaki’s own luggage is top-box OR panniers, not both. A pair of Oxford throw-over panniers hosted my pants, socks and glad-rags, so unlike the rest of the riders, I didn’t have a tank-bag in the way. I hate reaching around to steer my bike, though Mark did look pretty comfortable with his head rested on his Buffalo pack as we destroyed the miles.

That gel seat is an optional extra… It looks great, and while I wasn’t impressed at first, I do think it made the bike a little comfier. Whether it’s £360 comfier is debatable. 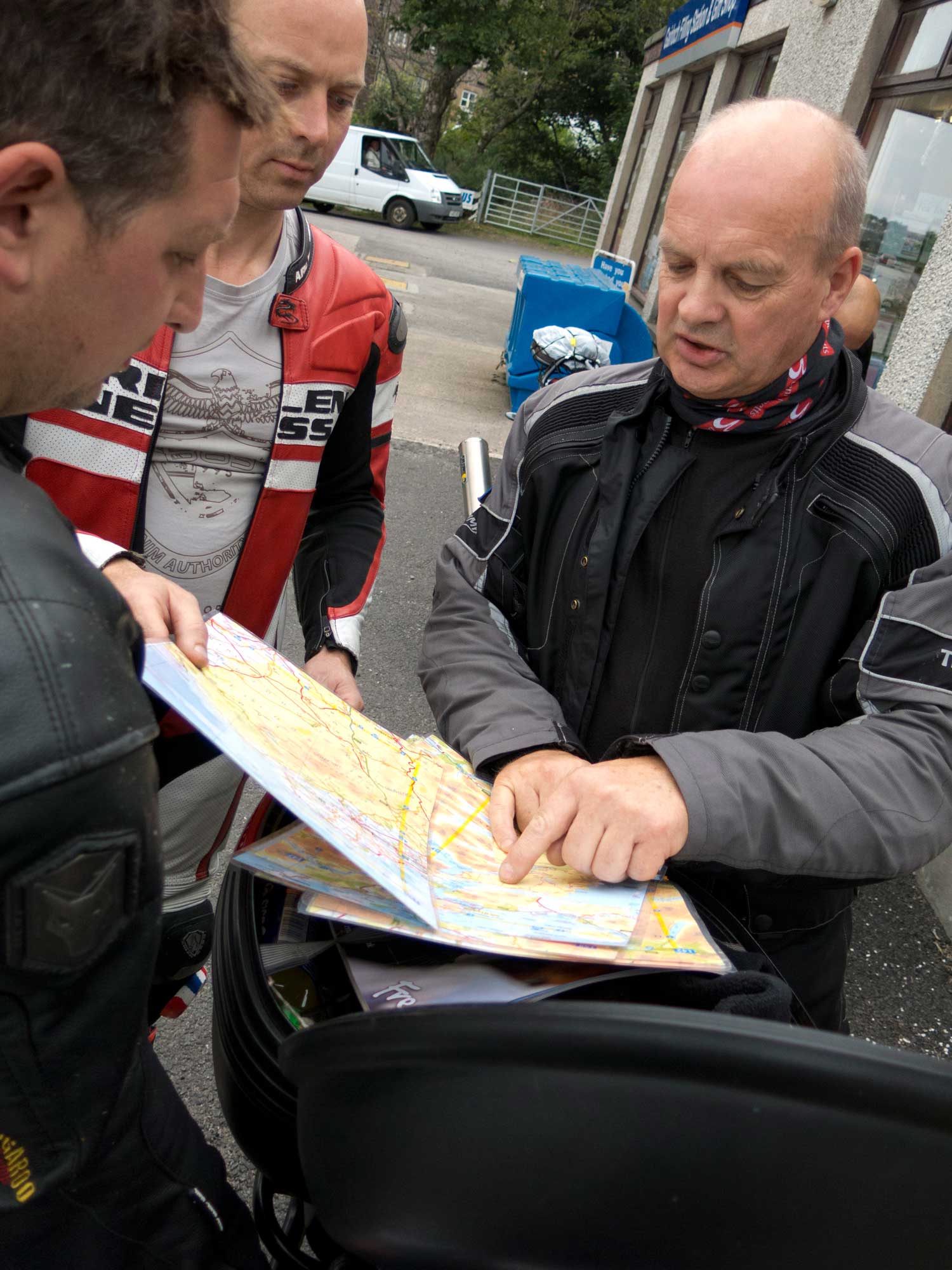 Stopping for Dave’s R1’s tank range meant the Kawasaki was never short of fuel, and the day’s riding finished at The Old Stables in, Beattock. The next morning started well, with haggis for breakfast (another first for me, which is pretty shocking at 42), then the ride past Glasgow, to Loch Lomond. We had to break here, not just for the views, but for drinks. It was too hot! Not something you often say about Scotland. 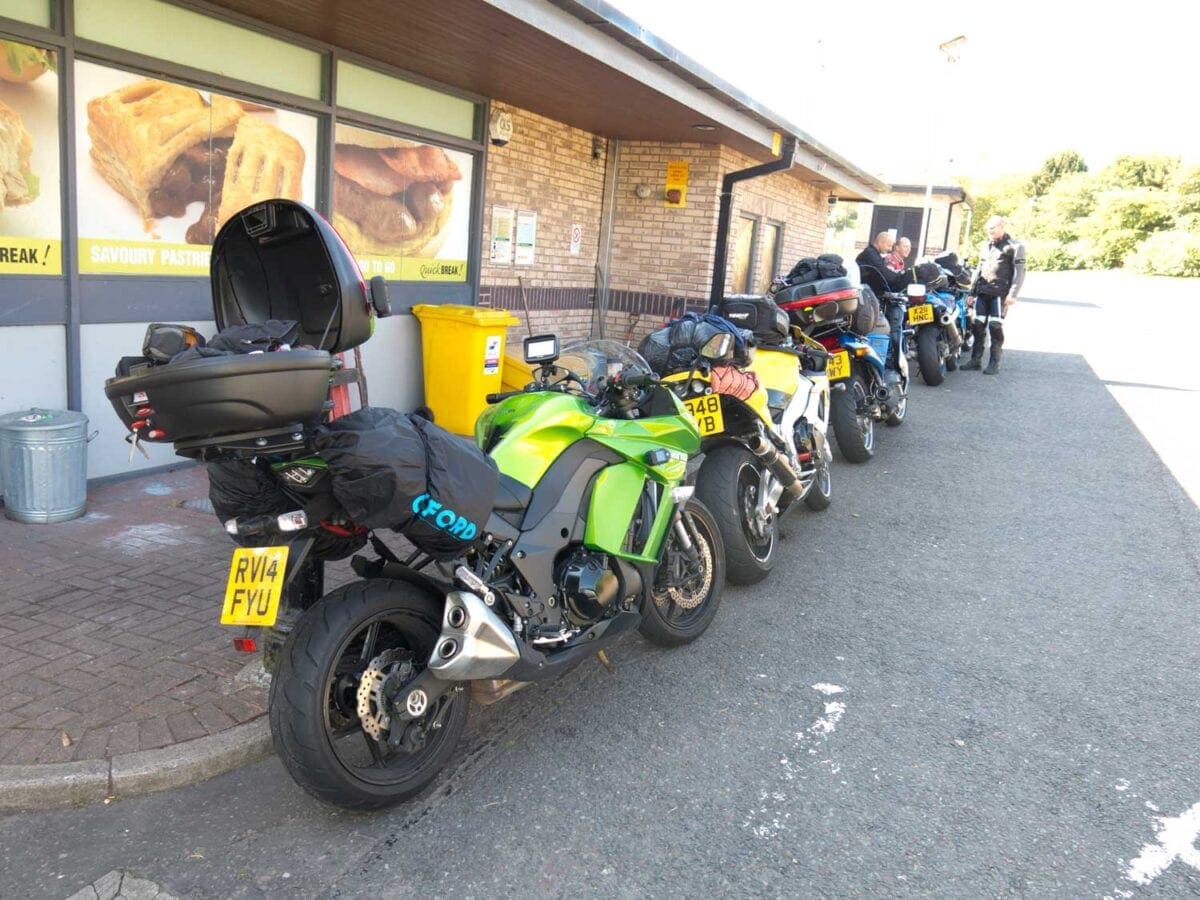 One of the many fuel stops from the 1339 mile journey

From Loch Lomond, it was through Glencoe, past Fort William and on towards Inverness. And that’s where it happened. That’s where we found the most incredible piece of road. Ever. From the Highland boundary fault of Loch Lomond, the roads had been good. From Glencoe they’d been amazing. But that section of the A87 was awesome. If it sounds like I’m getting a bit over-enthusiastic, let me put it this way: We all agreed that we’d ride the 457 miles from home just to do it again, then come straight back if we had to.

It’s the complete lack of decreasing-radius corners that makes the Highland roads so enjoyable. Unlike so many English roads that can catch you unaware as they tighten up, the Scots have laid quality Tarmac (which sees relatively little traffic) in well considered streams past the most amazing scenery you’ll see this side of Switzerland.

The Z1000SX was stable, easy to flick about (remember I still had all my luggage on) and mind-blowingly fast. People complain about ABS and traction control on modern bikes, but I’m all for it: I was so confident in winding the throttle on as I left each bend that the standard fitment Bridgestone S20Rs started to snot up – not something I usually manage off the track. 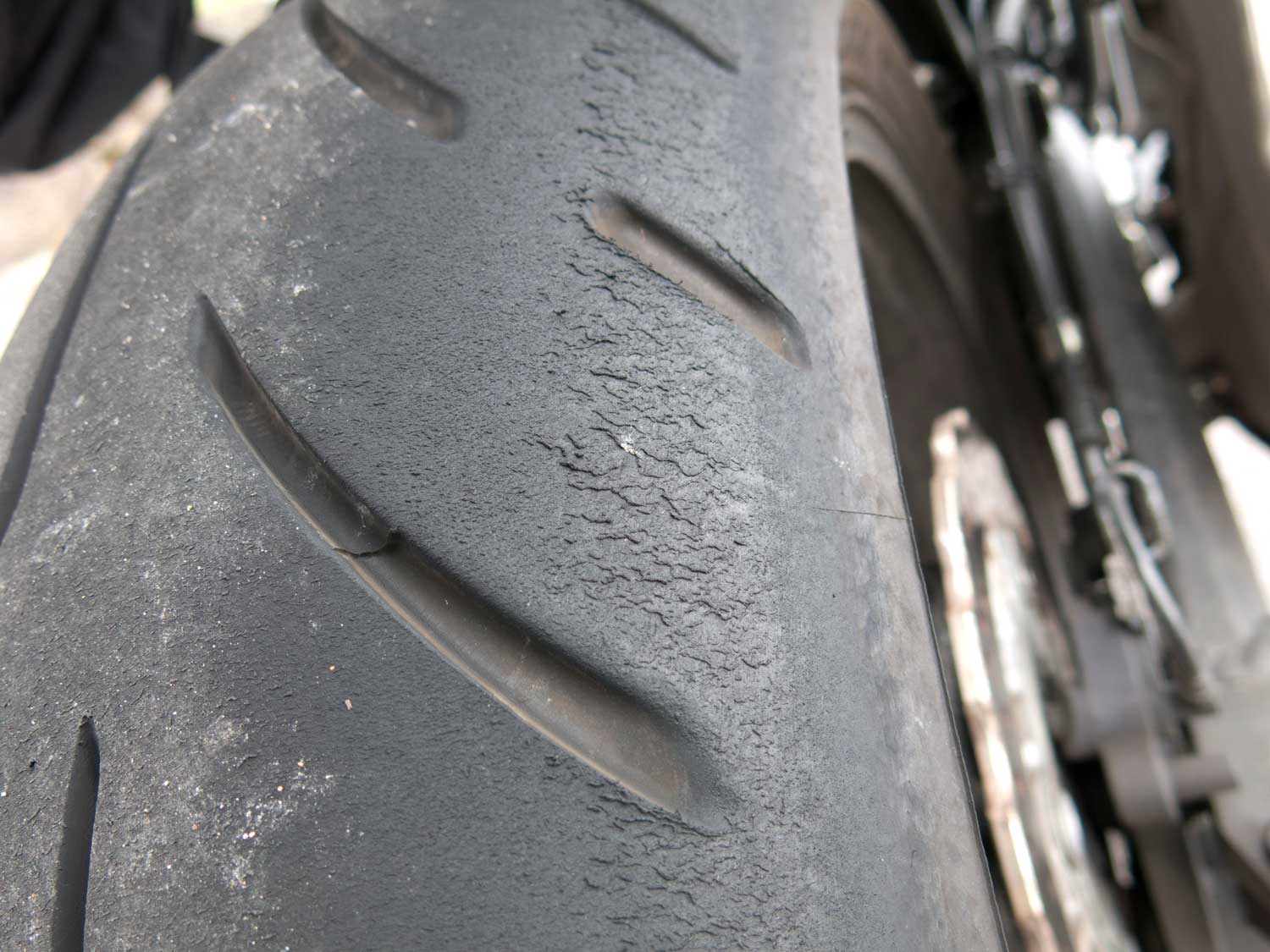 The Kawasaki’s screen is adjustable for height, and generally stays upright, but with temperatures soaring I had it dropped down low to let the wind blow through the open vents in my Held Tortosa jacket.

We were buzzing by the time we reached our base for the next two nights – Torguish House in Inverness. A bizzare mix of suits of armour, lavishly painted walls, and a huge antique/architectural salvage yard, the family was welcoming, but it was clear they didn’t want these five lads crashing drunkenly around at night, so were more than happy to drive us to a local restaurant for the evening “There’s nothing in Inverness anyway” they told us, and the ex-sidecar racing boss lady insisted we were back in by 11pm 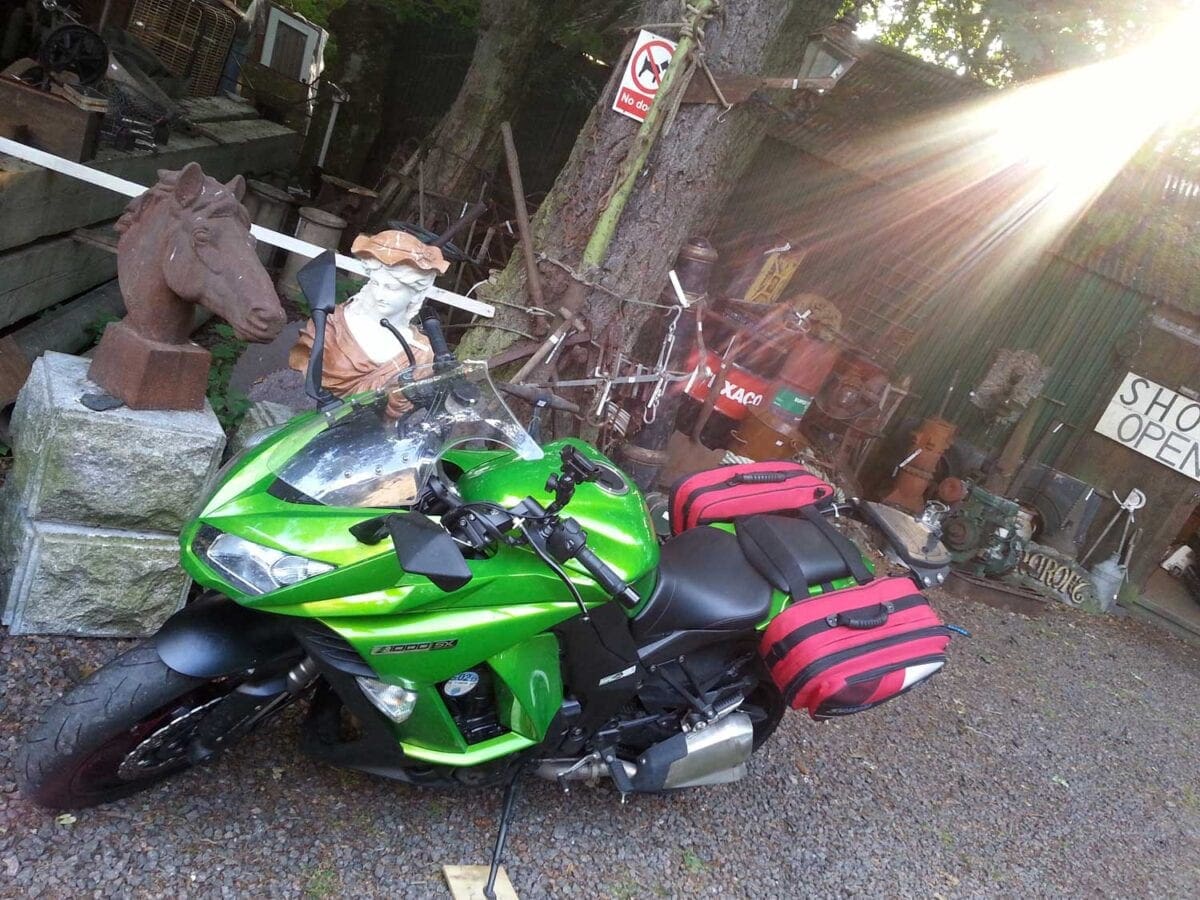 The fantastic Z1000 taking a break at Torguish House

Don’t think that ‘A’ roads in the Highlands mean they’ll be big, boring and busy – the A87 had proved itself already, and the next day on the A835 to Ullapool was almost as much fun (beware of over-priced coffee shops if you reach harbour). With the luggage left the hotel, we were going for it.

For some reason, the Albannaich have dropped some truly huge metal man-hole covers in the middle of a few corners, which could have spoilt the ride had it been raining. Which it finally did. A lot.

As we rode towards the Applecross peninsula, the clouds came in, and really let go. Signs warn that the road is ‘Not advised for leaner drivers, very large vehicles or caravans’, and with gradients of 1 in 5 taking you up to 2054 feet (625m), it’s obvious why. In the sunshine, this would have been incredible. In the rain, it was only amazing. The Pass of the Cattle was the highlight – an Alps-like switchback running down and into a valley, we might have been treading carefully as we eased through the low cloud, but it was still awesome. 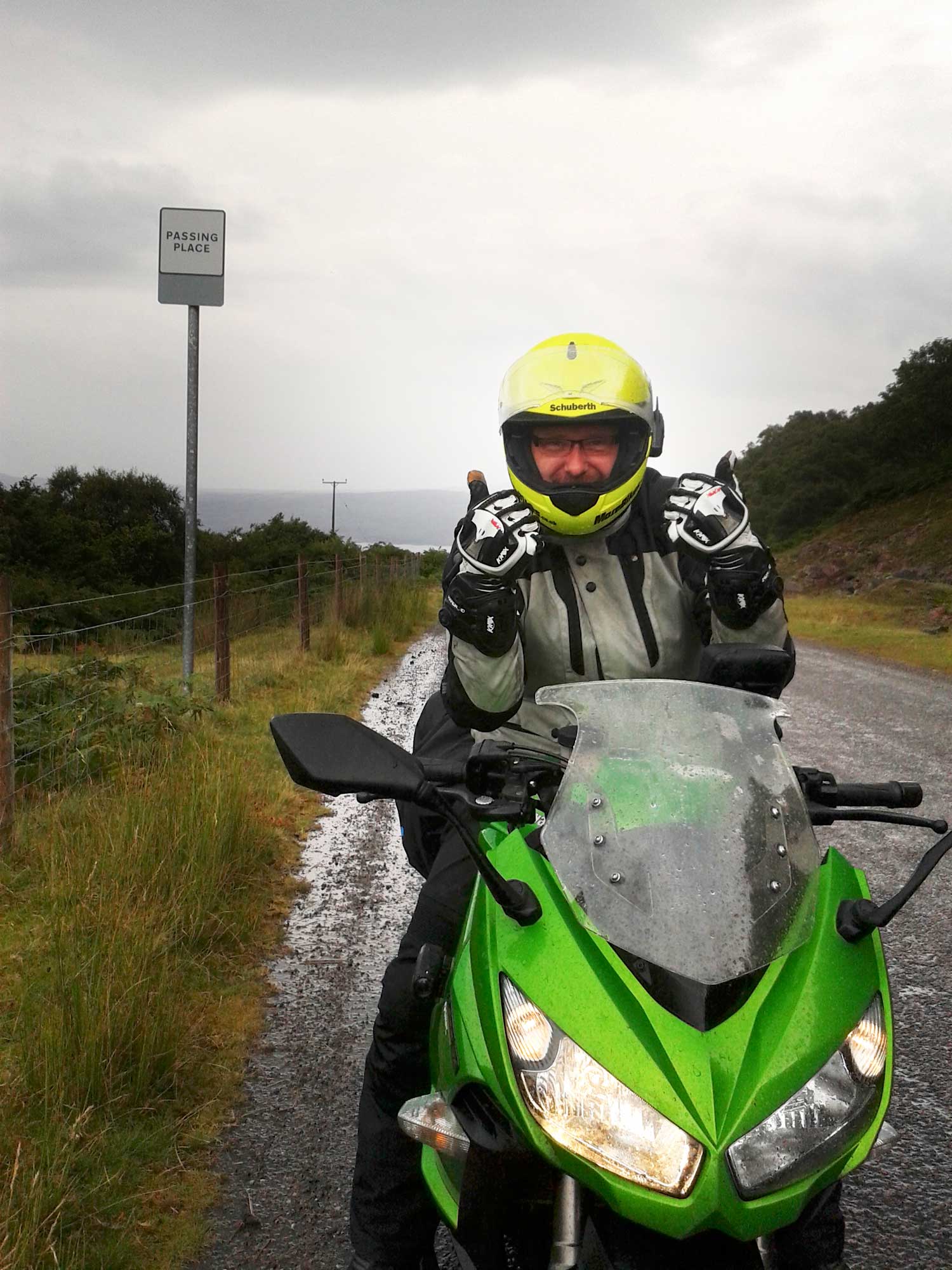 Despite the rain, Applecross was an amazing ride

The night is best left untold – we snuck out to Inverness, realised it was a bloody brilliant place to go out, and it ended in a messy blur of beers, shots, clubs and kebabs. But we got away with it, managing to creep back in at 2am without waking anyone. Not sure how we did that. 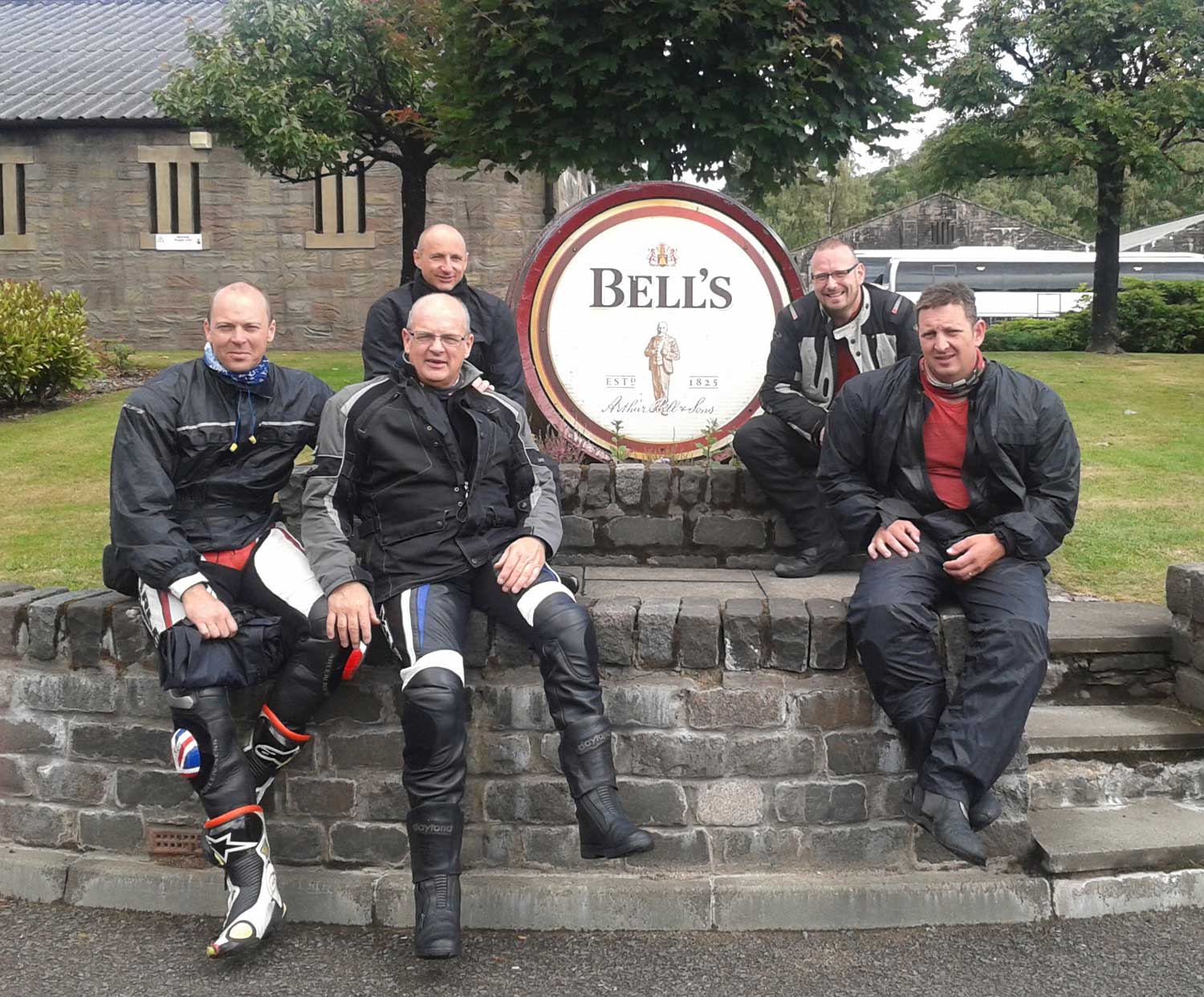 Our return journey took us around the Cairngorms to Pitlochry. The A9 was fast, with plenty of visibility (watch out for speed traps), and despite being busier, it was still a great ride. We didn’t stop to sample the Bells Whisky, but we did take a diversion off towards Blairgowrie to enjoy a break in the rain on some wonderfully tight twisties, before returning to the A9 and flash-floods. 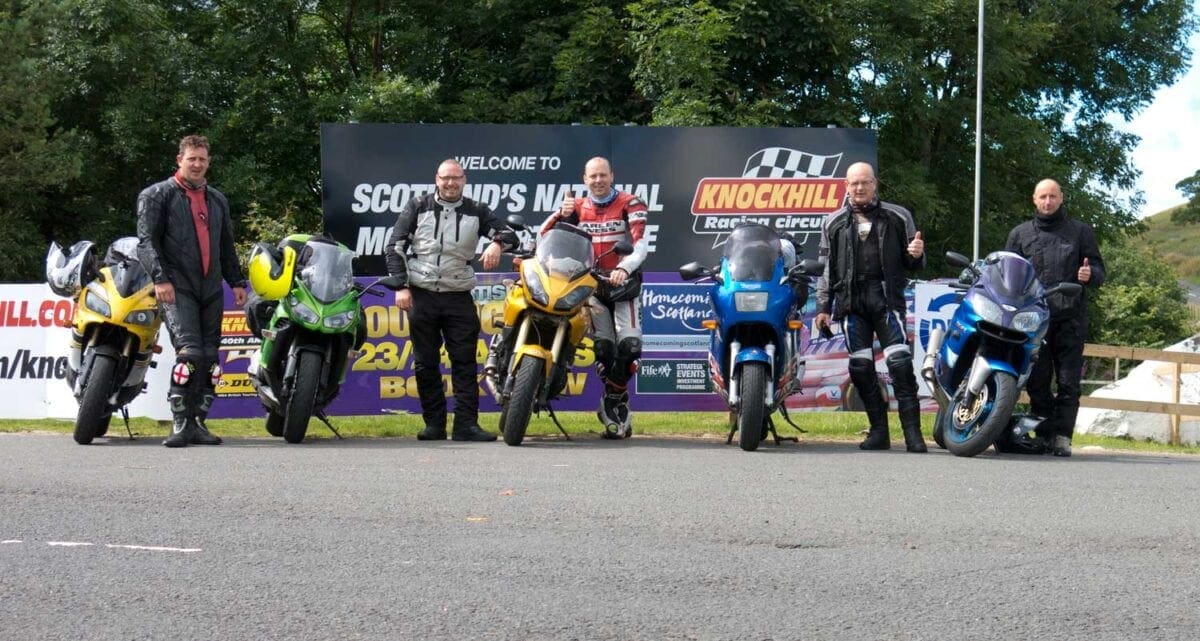 We called in at Knockhill for a ride around the perimeter of the circuit, and it was only in Dunfermline that we finally saw any Police in all of Scotland. They gave us a friendly wave as we rolled through the speed trap and onwards to our final night’s stop at Pot-A-Doodle Do – a Wigwam village in Berwick Upon Tweed. We’d ridden over 230 miles, but as we started to unload the bikes I remembered I still had the next day booked off work. With 267 miles left to get home, if I pushed on I’d have a free day with my wife and five-year-old daughter. 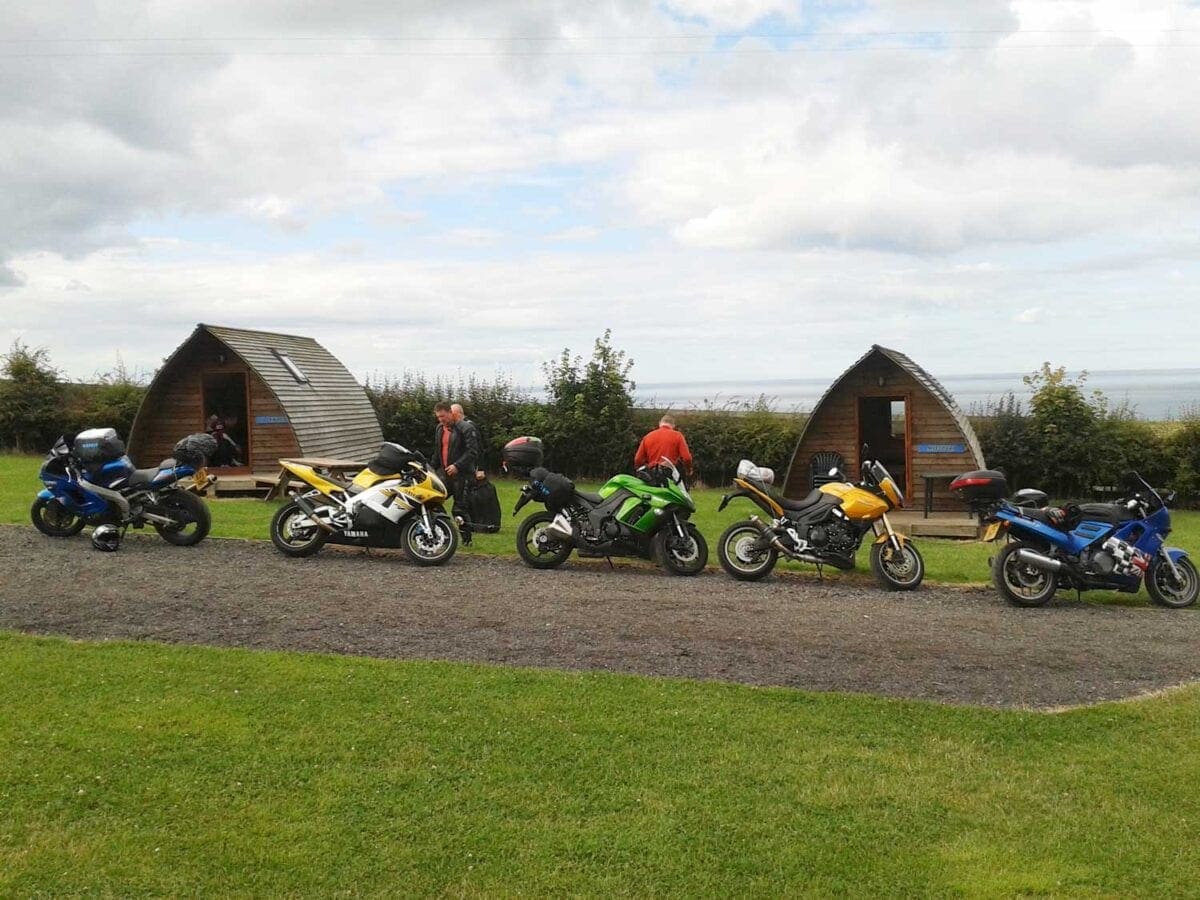 The final stop for all except the Z1000

All credit to the Kawasaki Z1000SX that I felt happy to do it. The rain had stopped, I was dry (thank goodness I bought my winter gloves), so I reluctantly left my mates behind, and took the A1 home.

We’d covered 1339 wonderful miles. The green sports-tourer had proved itself an absolutely incredible bike for motorways, fast A roads and tight, greasy mountain tracks. It was comfortable. It was capable. It was fast. And it was damn good fun. 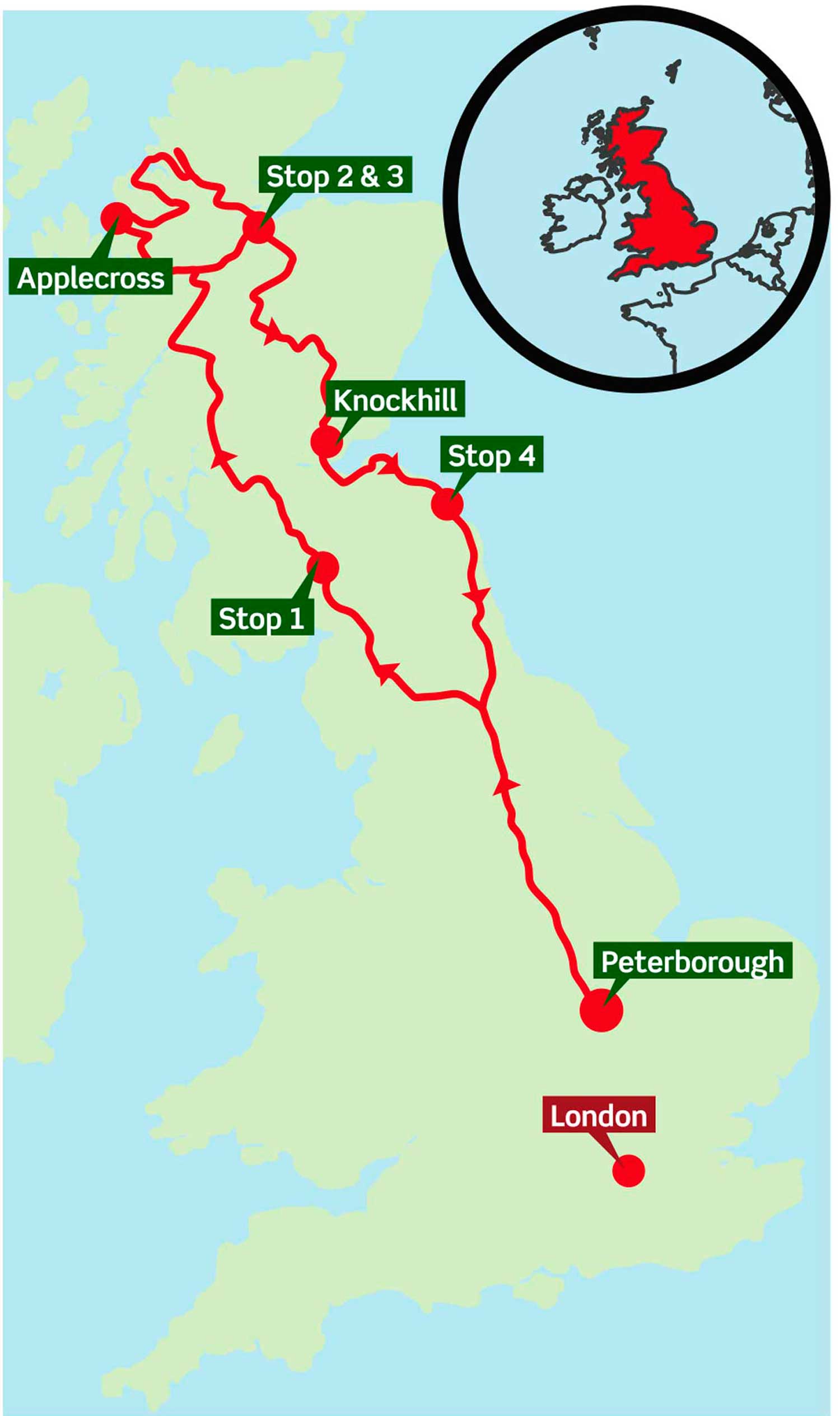