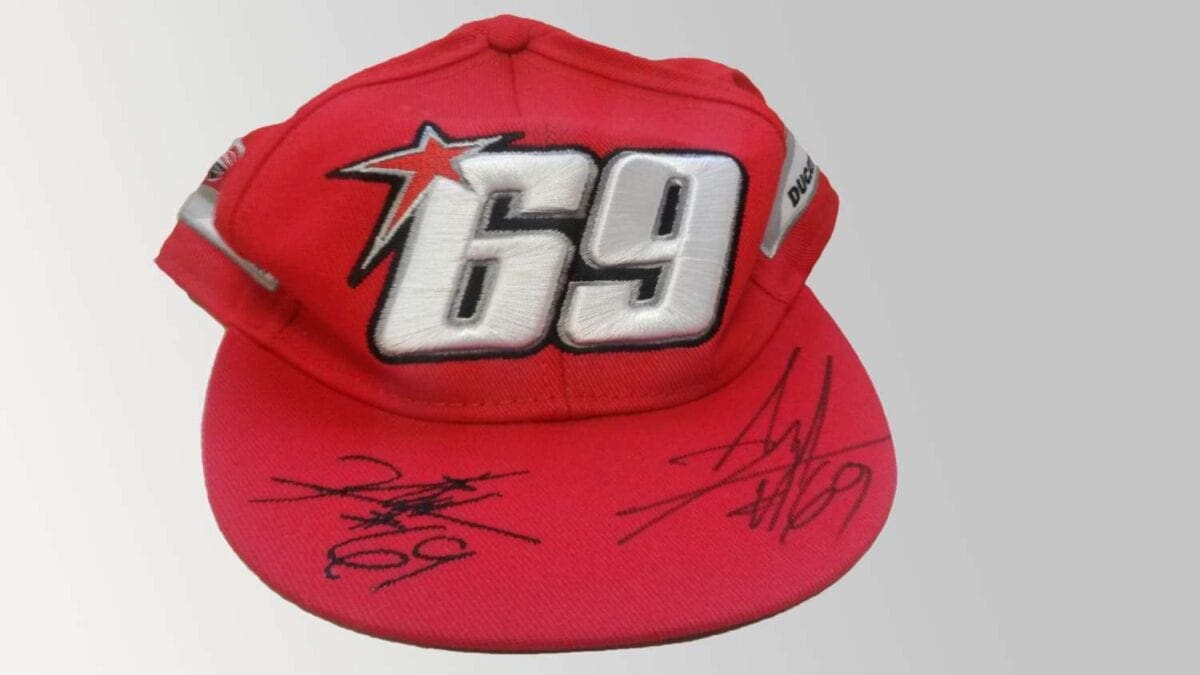 If you’re looking for the perfect Christmas gift for a MotoGP fan, Riders for Health is celebrating the end of the 2014 MotoGP season by auctioning 17 totally unique items of motorcycle racing memorabilia on eBay.

The items, which range from knee sliders to original paintings, have been signed by some of the biggest names in MotoGP, including newly crowned World Champion Marc Marquez and one of the most popular stars of the sport, Valentino Rossi.

The auction will run on the Riders for Health eBay page from Wednesday 19th November until Wednesday 26th November. To place a bid on any of the items visit http://stores.ebay.co.uk/riders-for-health.

As part of Riders for Health’s Miles for Mothers appeal, all winning bids from UK citizens on any of these auction items will be matched pound for pound by the UK government. To find out more about the appeal, which ends on 28th November, visit www.riders.org/milesformothers.

Stars of MotoGP and Moto3 have donated signed items to Riders for Health, to help raise money for their life-saving work. Reigning MotoGP World Champion Marc Marquez has donated a signed t-shirt whilst runner-up in this year’s Moto3 world championship, Jack Miller, has donated a race-worn knee slider and signed cap.

The auction also includes two signed pictures of Valentino Rossi, one of the most popular stars of MotoGP, as well as a signed copy of his autobiography ‘What if I had never tried it’.

Also up for auction are signed photographs and artwork from three British stars of MotoGP, Bradley Smith, Scott Redding and Cal Crutchlow. Seven of the Spanish riders in the 2014 championships have also signed unique items. Jorge Lorenzo, Hector Barbera, Marc Marquez, Dani Pedrosa, Alvaro Bautista and the Espargaro brothers have all signed a map of Spain and a Spanish flag which will both be up for grabs.

Jeanette Wragg, Events Manager at Riders for Health said, ‘We want to say a huge thank you to MotoGP, the teams and the riders who give their time to Riders for Health, and to the fantastic artists and photographers who have donated their work to be auctioned. Hopefully the friends and families of MotoGP fans will find the perfect Christmas gift in our end of season auction!’

All of the money raised from the online auction will help Riders for Health ensure health workers in Africa have access to reliable, well maintained motorcycles and ambulance so that they can continue to transform health care for 14 million people.

About Riders for Health

Riders for Health is the official charity of the Fédération International de Motocyclisme (FIM) and MotoGP. Riders for Health organises fundraising events around the world to coincide with races. The largest of these is Day of Champions, an annual event before the British MotoGP.

Riders for Health works in Zimbabwe, the Gambia, Lesotho, Nigeria, Kenya, Zambia and Malawi where it works with ministries of health and other, smaller community based organisations to help manage two- and four-wheeled vehicles for outreach health workers, allowing them to reach rural villages. Riders provides maintenance and management of these vehicles, and training for health workers in safe riding and driving.