The history of Triumph | 25 years at Hinckley It’s nearly a quarter of a century since Triumph came back with a bang. Bertie Simmonds examines how they did it for MoreBikes…

On June 29th 1990 the press gathered for the announcement that Triumph Motorcycles was back in business again.

Many had heard this all before, and many have heard similar stories of great British names being resurrected since. But only Triumph Motorcycles has really done it properly, and in a big way. But how did they do it? Seven years of hard work had already been completed behind the scenes to get to that point in time – in 1990 – when the first bikes were about to be revealed.

The history of Triumph motorcycles: The beginnings of an icon

Our story starts with John Bloor. John Stuart Bloor (known as JSB to his employees) was born in the early 1940s in a south-Derbyshire mining village. He finished his education at 15-years-old and began his career working for a local building contractor. Just two years later at 17, he took the plunge and became self-employed, initially as a plasterer, before taking on a project that led him to build his first complete house; all before his 20th birthday. From this start Bloor Homes blossomed, becoming one of the largest privately-owned house-building companies in the UK.

Bloor Holdings purchased the Triumph name in 1983, keeping the brand alive through former Triumph parts dealer Les Harris, who was allowed to license-build small numbers of Bonneville motorcycles. But – by 1988 – Les had built his last bike. Bloor himself was no two-wheeled idealist – he didn’t decide to resurrect Triumph because he was a mad-keen biker. He says: “When I was 16 I used to have a Tiger Cub. To be honest, I didn’t think a lot of it, as water used to get into the points. I’d be coming back home from work on a winter’s night at 6pm I was always having to pull over and start fiddling with the points. I wasn’t best pleased!” Instead, with Bloor Homes doing well he wanted to start a business that was one with a completed product, but which could be successfully exported abroad.

Bloor had put together a small and secretive design and development team based at Unit 14, Bayton Road, Bedworth, and they began working on a new range of Triumphs in the late 1980s. They visited motorcycle factories across the world, some in Japan, some in Europe and formulated their own plans for a new range of modular Triumphs that would spark the re-birth of mass-produced British motorcycles. 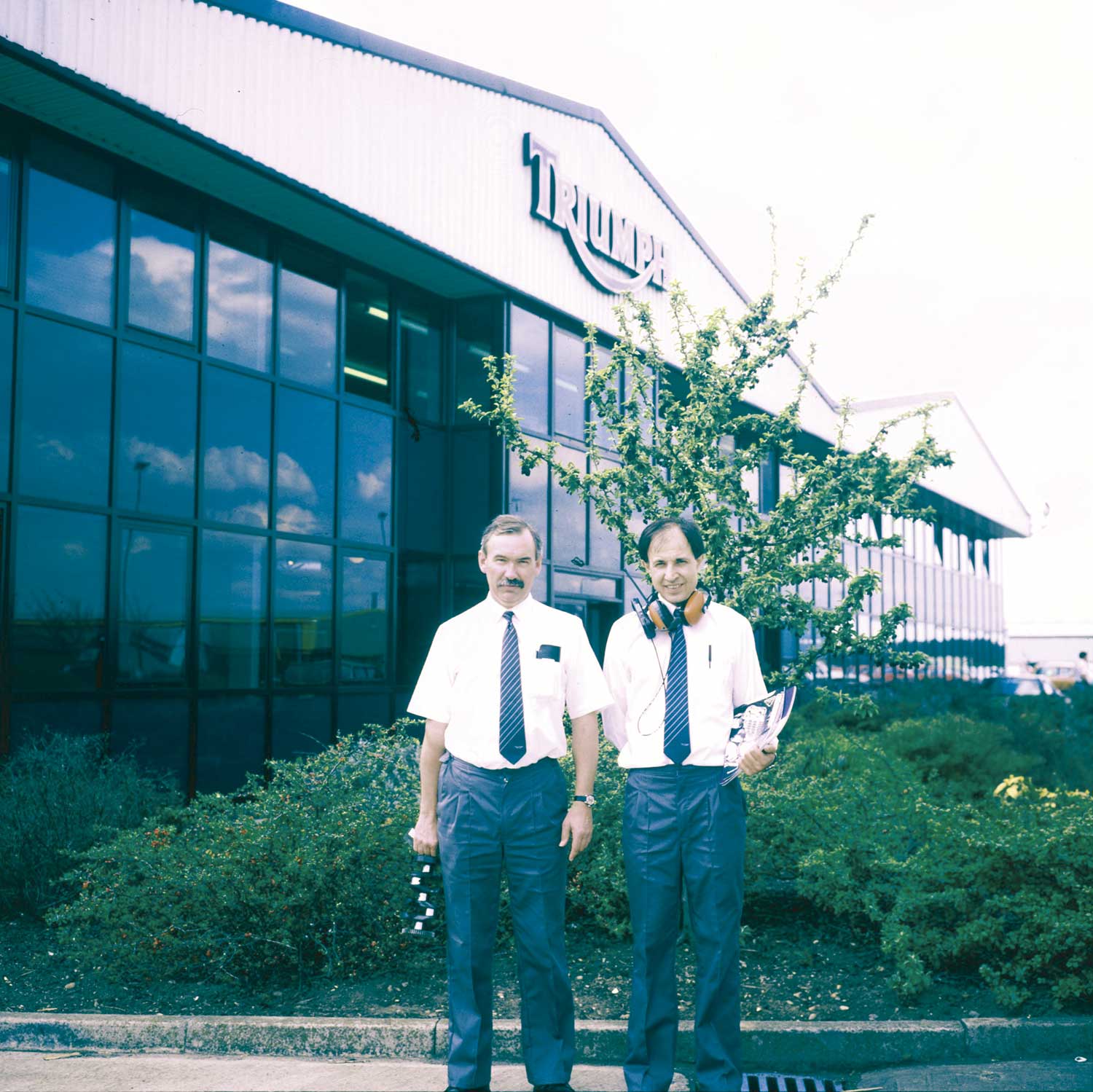 The approach was called the ‘modular’ concept, because models would share common parts, be it chassis or engine, from which you could build a number of different machines. It proved to be a cost-effective way of getting a wide-range of motorcycles out to the buying public, and a concept which was originally mooted back in 1973 by BSA-Triumph’s Bert Hopwood, shortly before the firm went bust.

Back to 1990 and the company explained that they were not aiming at low-volume production, or ‘specials’; instead Triumph Motorcycles had set themselves up on an industrial estate in Leicestershire and invited the journalists to bear witness to their intentions to mass-produce British-designed and -built motorcycles once more. That day the press saw a brand-new, state-of-the-art motorcycle production facility, ready to manufacture and assemble a six-strong range of multi-cylinder motorcycles for the 1991 model year.

Triumph would be producing triple and four-cylinder motorcycles with a power output of anything between 90 to 135bhp, and would not only be competitive with anything then produced in Europe, the US or Japan, but also employ the latest production processes. The machines would be officially launched at the Cologne show in September 1990. The layout of these new triples and fours was up-to-date, featuring liquid-cooling, DOHC and four-valves per cylinder. The frame was a steel-spine, upon which the various engines would hang, with the new factory producing an annual projected total of 10,000 bikes. 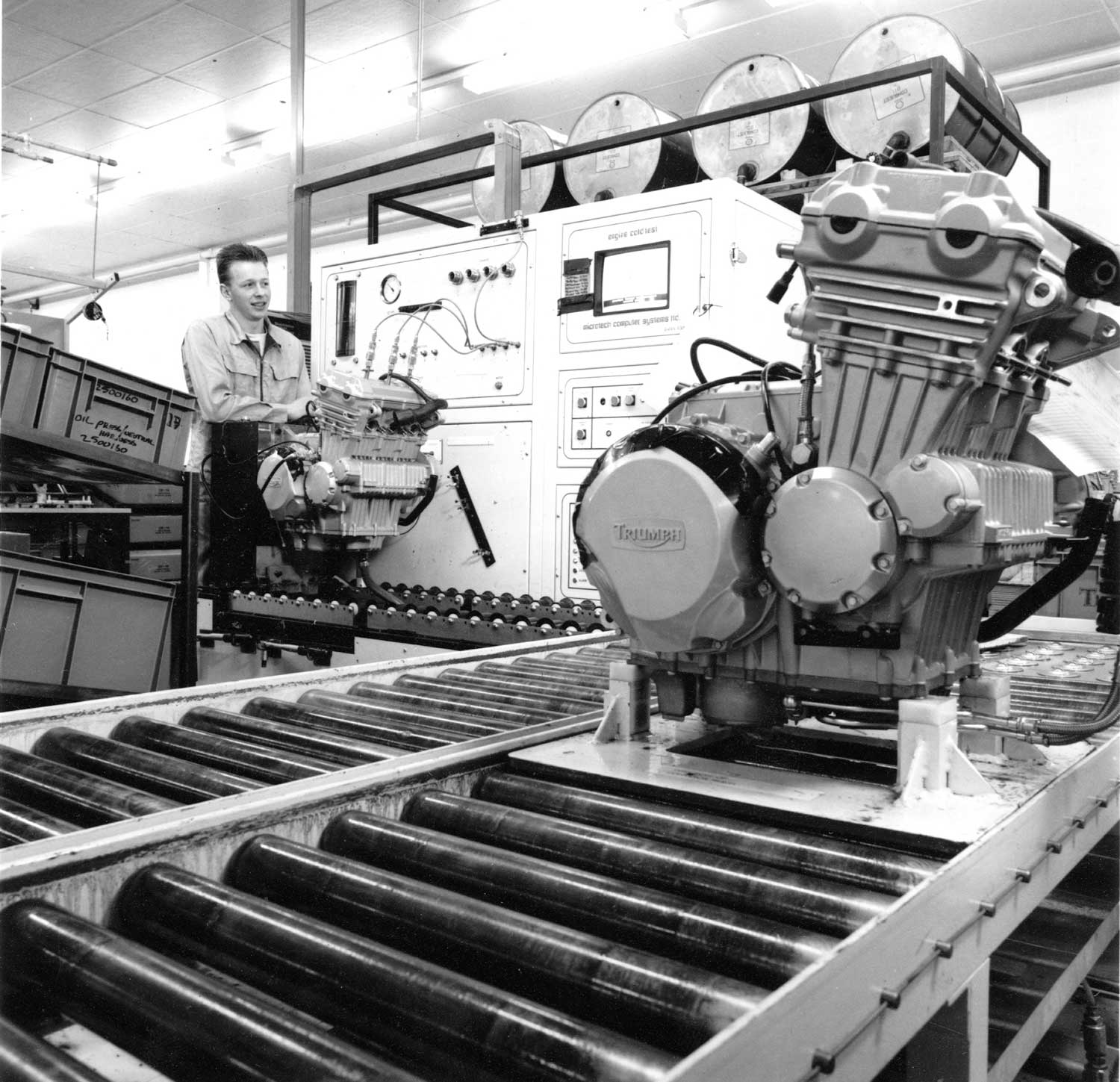 Following a factory tour, the journalists were shown a 750cc naked three-cylinder roadster, – later called Trident – and a fully-faired three-cylinder sports tourer – later called Trophy. From these two bikes has come today’s 29-strong range of motorcycles, covering sportsbikes, adventure machines and nakeds. This isn’t to say that Triumph hasn’t gone up the odd blind alley: like the Japanese, the British firm has made mistakes. It started out effectively following the trends set by the Japanese manufacturers, producing four-cylinder designs that (at least back in the 1990s) could never hope to compete. Since the early 2000s Triumph has pressed on with its own designs that stand out on their own merits: machines such as the Rocket III and three-cylinder Daytona 675. 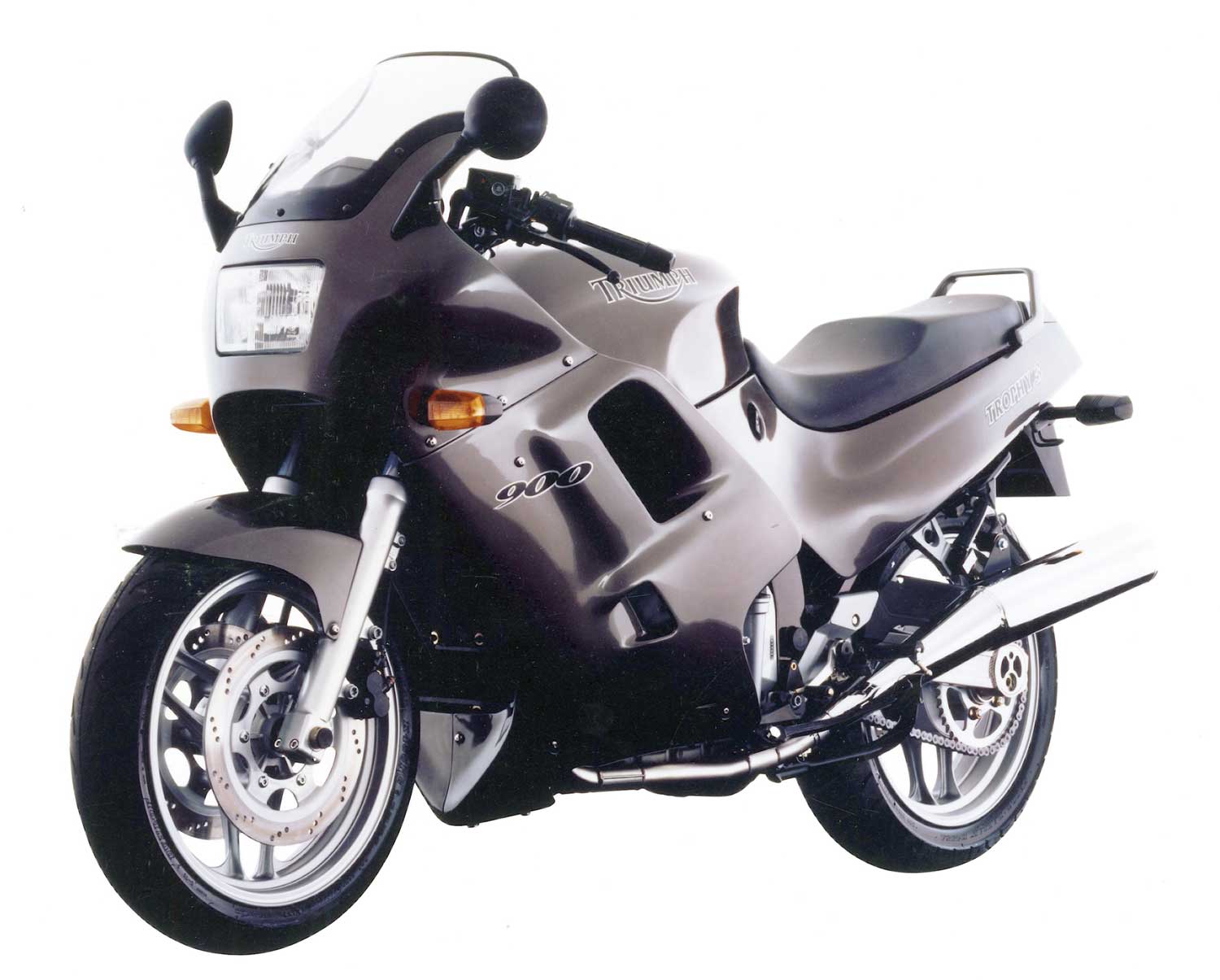 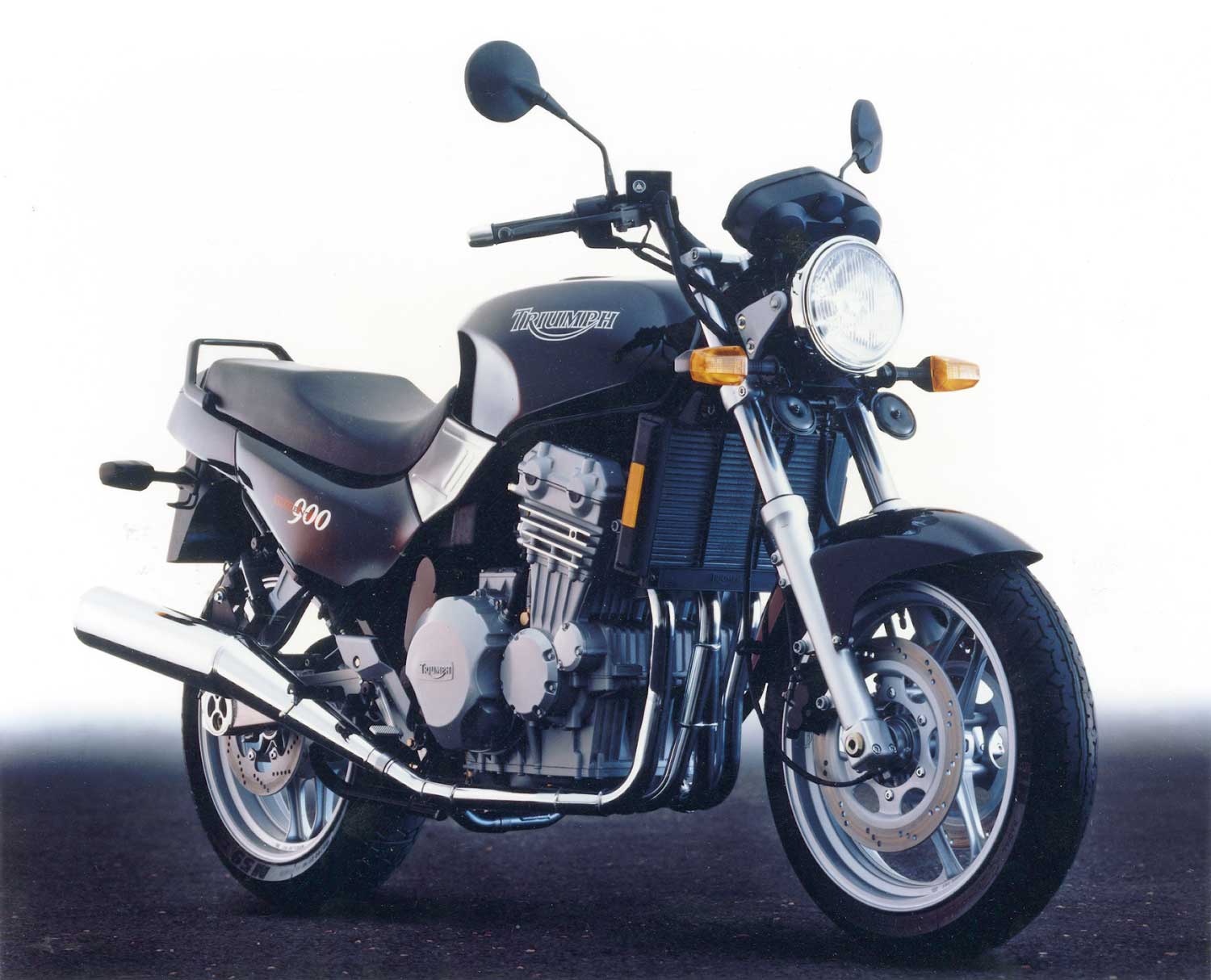 The original factory on its ten-acre site now looks small compared to Factory Two, which was completed in 2000 and sits upon a site four-times larger than the original. The new facility offers technology that is as cutting-edge now as Factory One was back in 1990. In the beginning, Triumph could produce up to 200 crankcases and cylinder heads per week. By 2010 a total of 200 completed bikes was being crated for delivery every day. Production topped 50,000 units a year in 2008, while the 10,000 a year mark was reached in the mid 1990s. Back in the early ‘90s, the level of investment was thought to be anything from £60-£80 million, with Bloor bankrolling everything until Triumph Motorcycles could send out its first invoice in the spring of 1991. The company finally posted a profit in 2000, after which it is thought around £100 million had been invested in the firm. 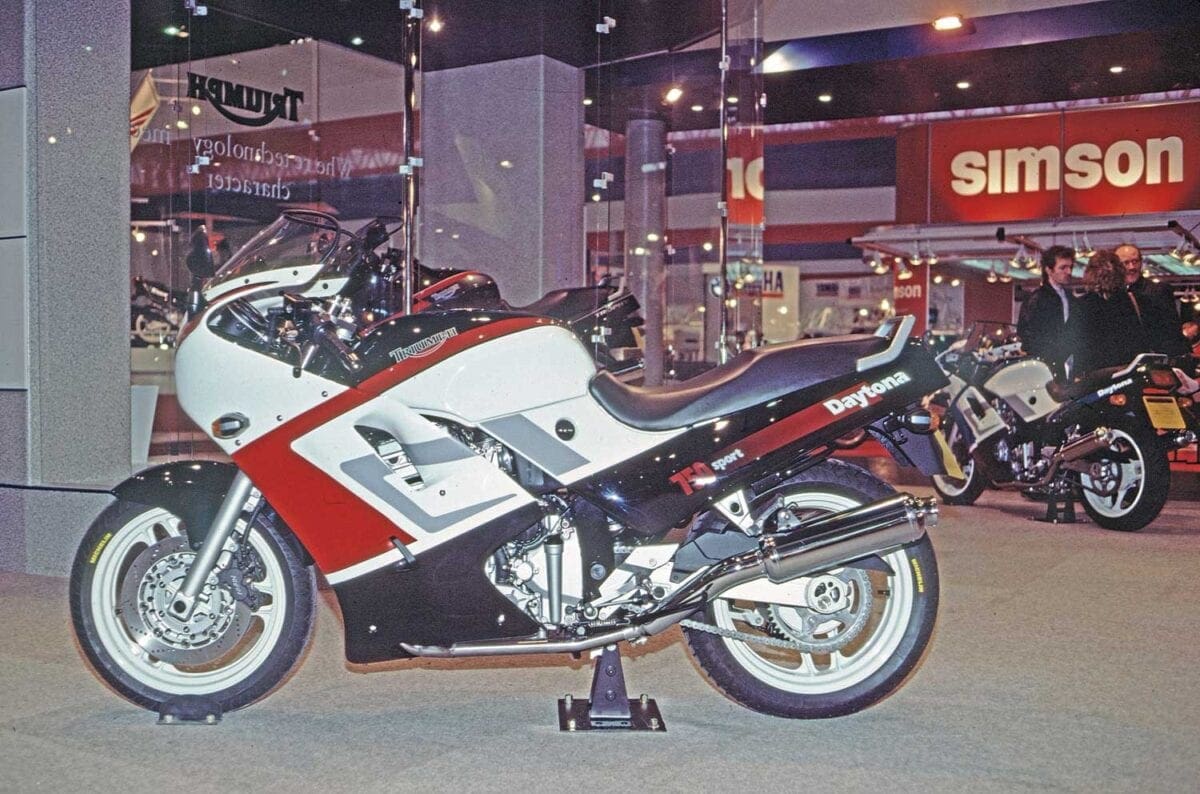 A six-strong range was launched at Cologne for the 1991 model year Photo: Don Morley

With the benefit of almost 25 years of hindsight, we know the re-birth of Triumph Motorcycles has been one of the biggest successes of British business. Today Triumph Motorcycles is a global brand, selling motorcycles, clothing and winning championships with its products. Not a bad quarter century then? 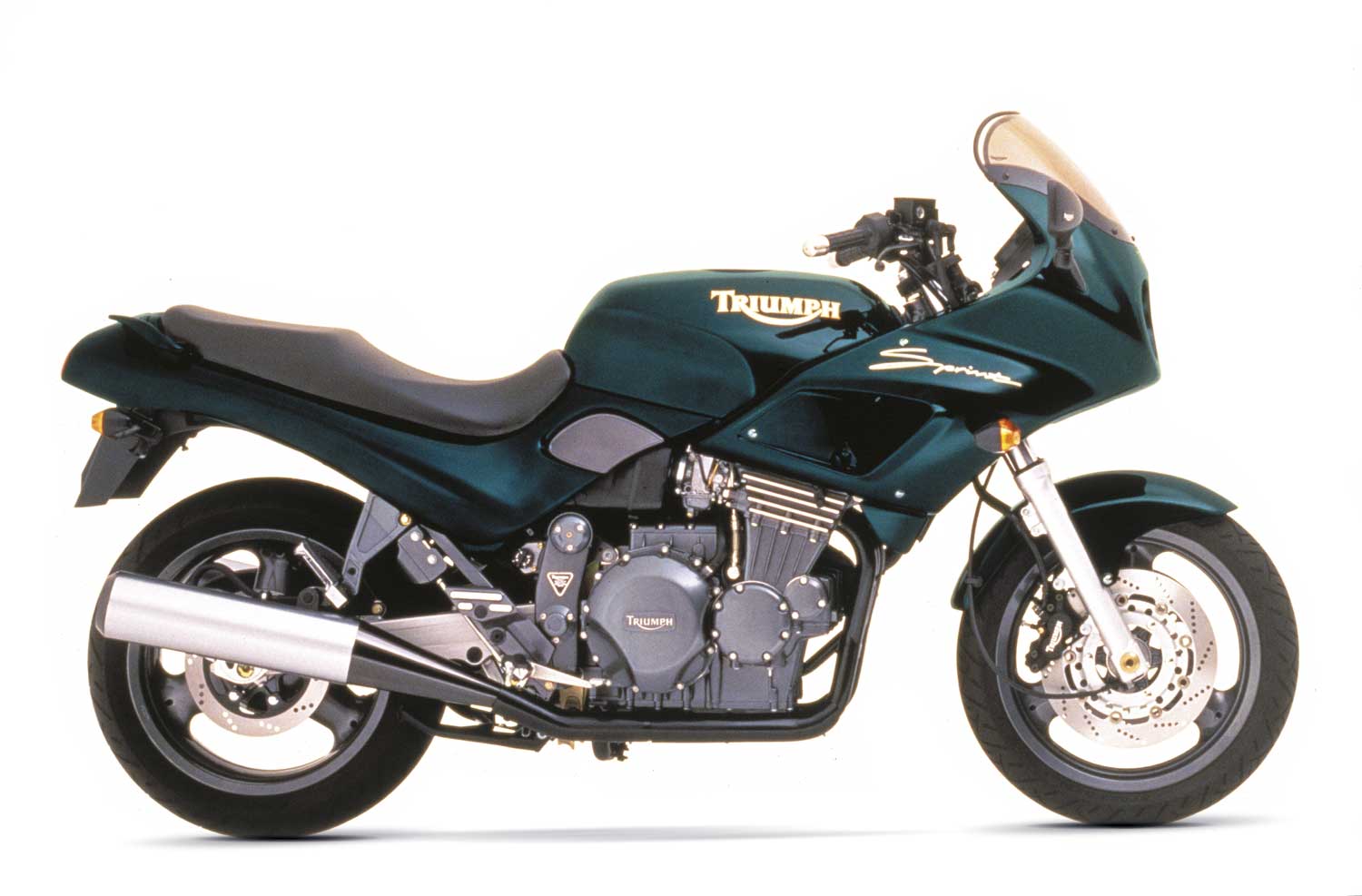 Morebikes will be celebrating Triumph’s up-coming quarter century by living with eight of its latest bikes. Bertie Simmonds from Classic Motorcycle Mechanics has been a journalist for 25 years, with the last 20 in motorcycles. He will be living with a Triumph each month and reporting back to Morebikes about how good, bad or indifferent it is, so stay tuned…