I hate to be a pedant, but while the internet is chuntering on about Triumph’s new Tiger video showing Bear Grylls riding the 800 XC off-road, then at the end having a disclaimer stating the bikes aren’t intended for off-road use; in such a litigious world, I’m not that surprised. However, I spoke to Triumph at Motorcycle Live and they said “Hands up – we made a mistake!  In the mad rush of Intermot, EICMA, Motorcycle Live etc., our standard disclaimer was used and we failed to spot the error. The video will be updated with the correct version shortly.”

Despite it being an error, unless you’re on private land (as that video obviously is), riding off-road is illegal in the UK. Riding byways (green-lanes) is still riding on the road. Of course, the Tiger launch in Spain was in a quarry at one point, and we know as well as Triumph does that the Tiger is a very capable off-road (in every sense) machine. But it’s not a motocross bike, and unless Triumph covers its arse, some fool will complain when the bike breaks over a massive MX jump, or when they fall down a mine shaft. Regardless of the fact that the company admits it mistakenly used the road-bike disclaimer, what bothers me is the lack of common sense too often displayed by us, the public, and the rush to apportion blame, or to look for the negative side of things.

Here’s the problem: Litigation can be annoying – people should sometimes try to take responsibility for their own actions. But sadly someone will always amaze with stupidity, then look for someone else to blame.

Noticed that there aren’t many pictures of wheelies and knee-down in motorbike magazines anymore? There are a few reasons for that, not least that much of the motorcycle market has grown up. But it’s also due to publishers wanting to cover their own backs – if someone hurts themselves pushing for a photoshoot, who’s going to take the blame?

Motorcycle adverts have become tamer (with KTM recently bucking the trend and causing a few ruffled feathers in the industry), but a lot of that is due to the manufacturers and press knowing we need to present a more sensible attitude to avoid further legislation (which is counter to the fact that we sometimes need to inject a bit of attitude and excitement too). It’s also for fear of litigation – how cool would it it be to see Scott Redding getting his head down on a roundabout on the latest Honda? But then when Billy-Bob down the road buys one, and falls off trying to do it himself, the Daily Hate will be all over it.

Common sense, people… without it, we’ll be seeing a lot more disclaimers!

You can read the full review of the new Tiger 800 at www.morebikes.co.uk/2015-triumph-tiger-800-review. On Tarmac roads, and mud roads, it’s a great piece of kit… In fact, British motorcycle expedition expert Globebusters has just announced that it will be riding Triumph’s 1200 Tiger Explorer XC, and the Tiger 800 XC  on two major expeditions in 2015; the Ace to Ace follows a 12,000 mile route from London’s Ace Cafe across Europe and through Central Asia, Iran and Tibet to the new Ace Cafe in Beijing. The bikes will be run on long stretches of unpaved dirt roads, up as high as 4000 metres. This will be followed by a 7500 mile journey across Africa, from Kenya in the East to Cape Town in South Africa, facing high temperatures and gravel roads. 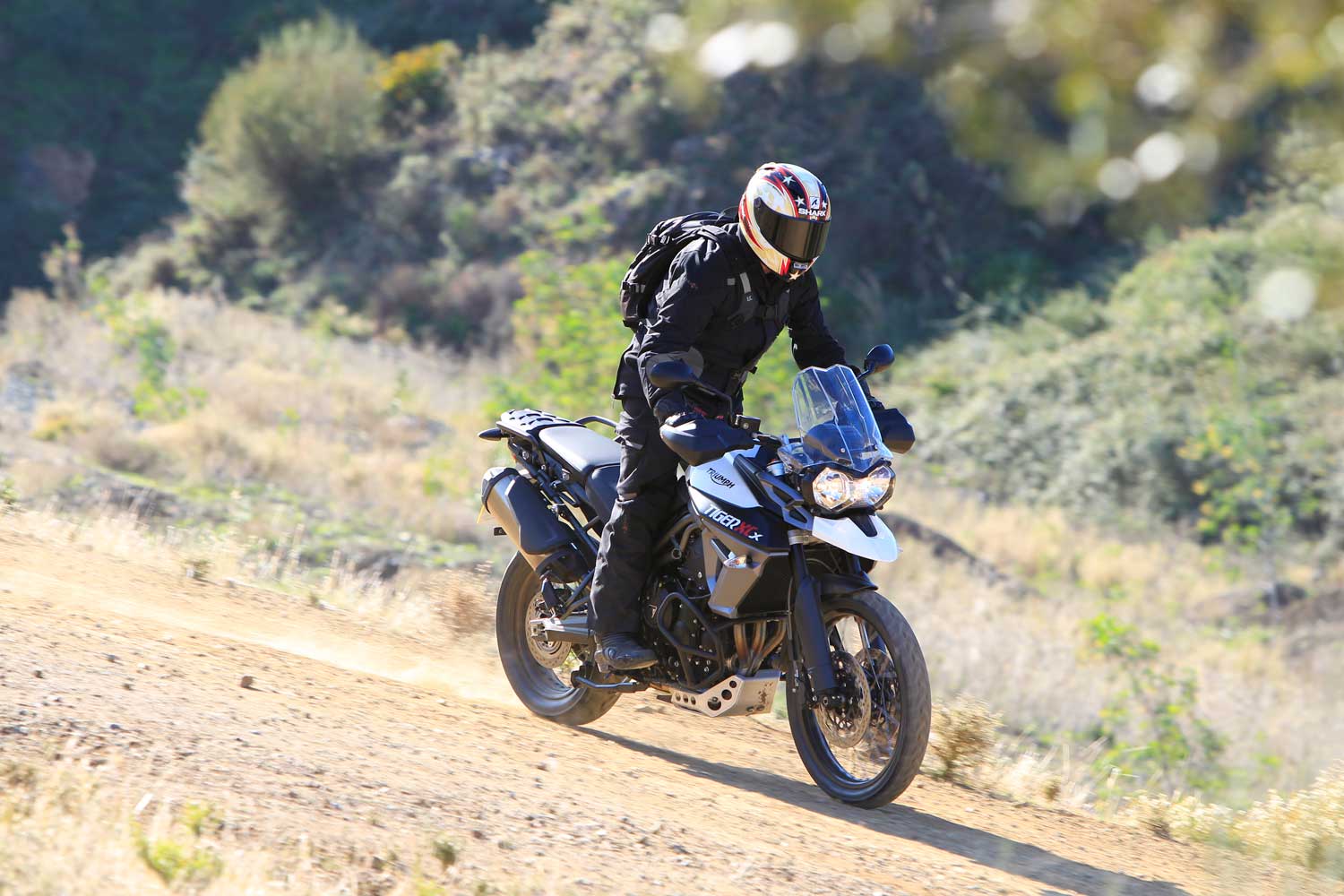