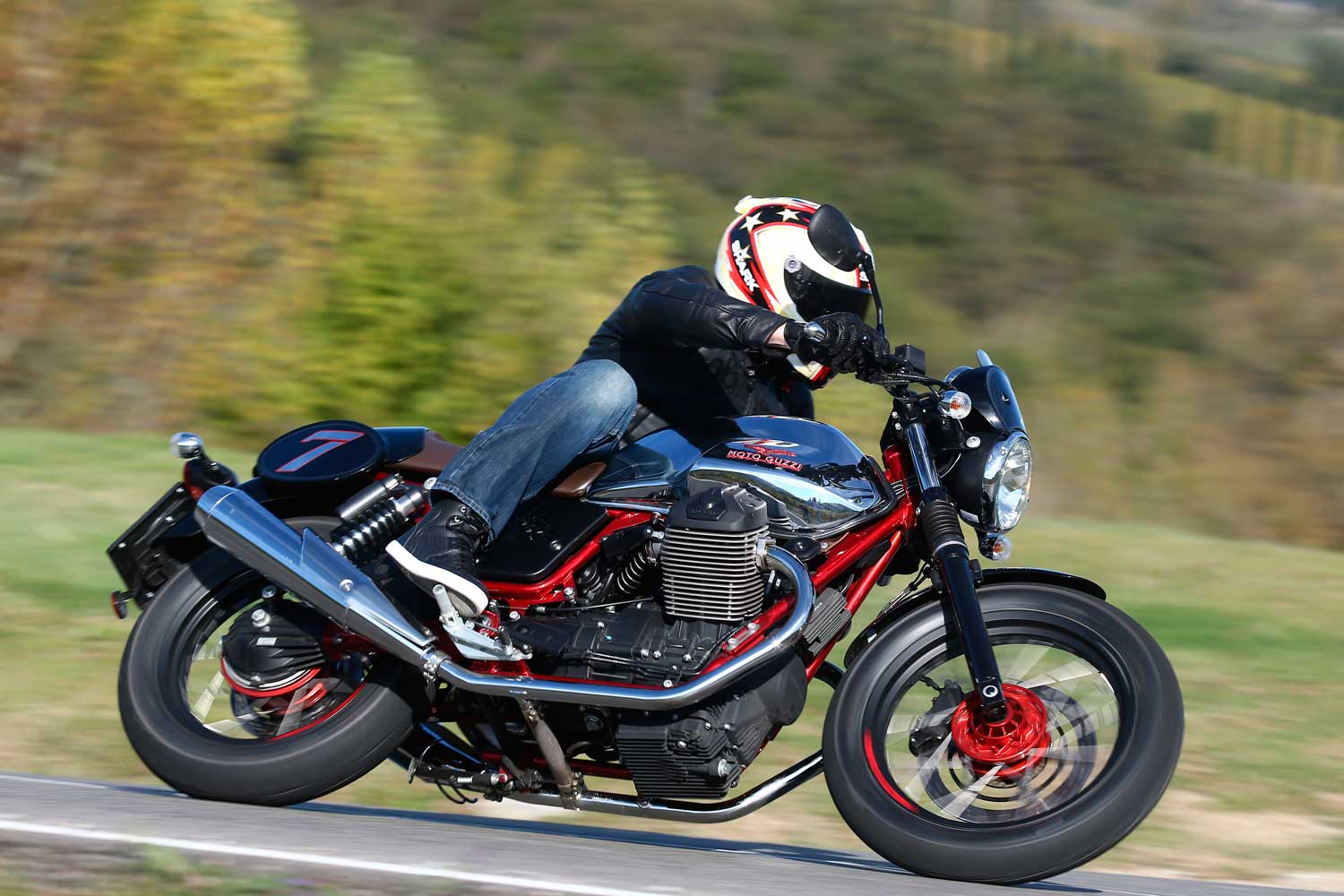 The V7 range has been nipped and tucked for 2015. With three models in the range – the Stone, Special and Racer – each with their own styling as well as over 90 accessories to bolt on, you can make it your own. And it’s A2 licence compliant!

A revamped 750cc V-twin motor for the V7 II gets a new cooling system, a new ECU brain and fuel injection system with a new alternator and forced lubrication with new oil pump. It produces 48bhp which makes it A2 compliant – meaning you don’t even have to have your full licence to legally climb aboard.

There’s a new six-speed gearbox on the V7 II, reducing the spacing between the first and last two ratios, which keeps the engine spinning easier and gives it a more eager feel than the old bike.

The primary drive ratio has also been changed, going from 16:21 to 18:23. Along with the gearbox the clutch is improved, with modifications to the lever, the linkage and the cable to make the action lighter. 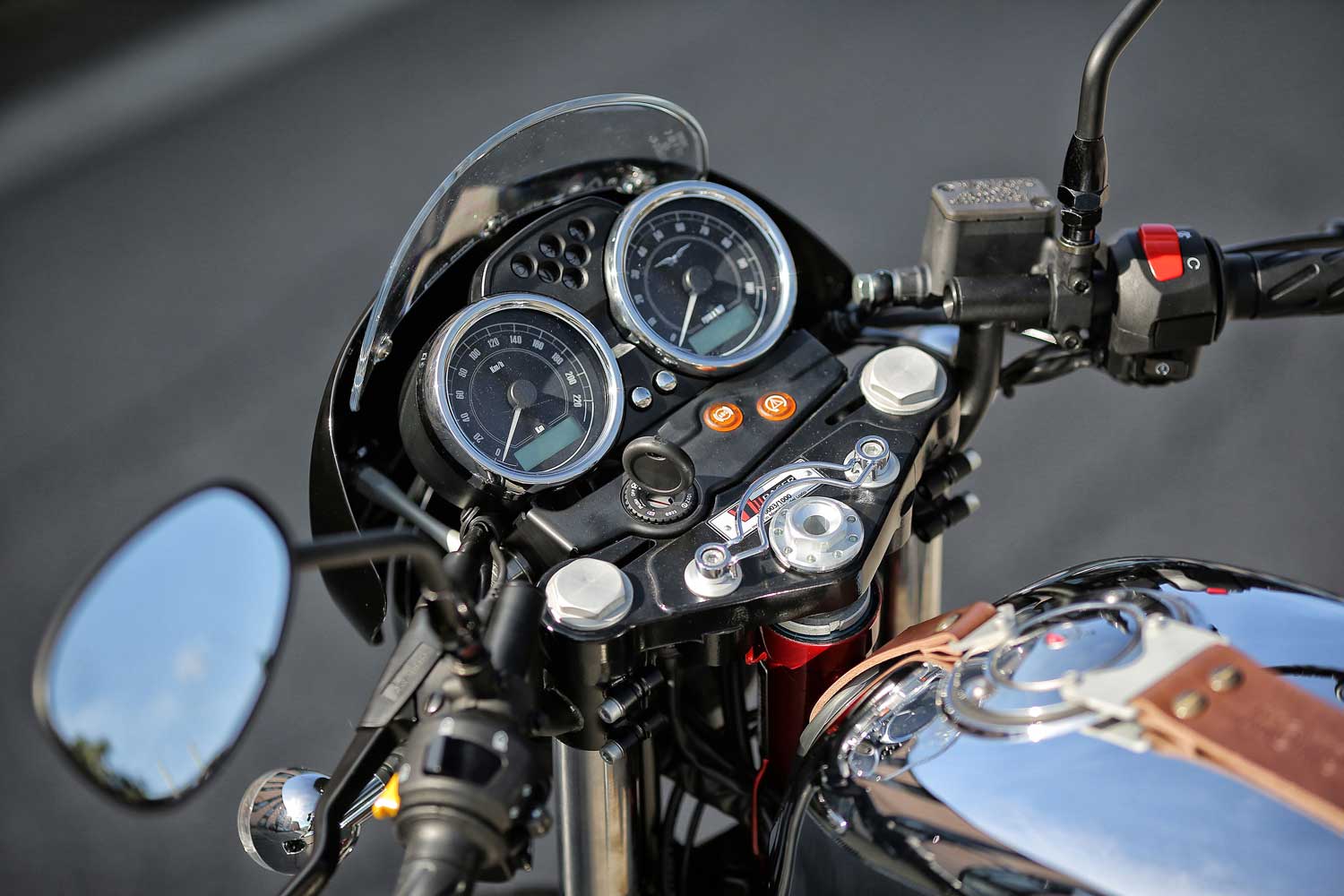 The rear axle has also been changed for more stability and better rear suspension performance, by lowering the shaft-drive output by 50mm. According to Guzzi, that now gives more tyre grip during load transfer, both when braking and changing direction under load.

The new bikes get both ABS and MGCT (Moto Guzzi Controllo Trazione). The former is a Continental two-channel unit, the latter is a less-complex version of the system on the California 1400, which adapts to the vehicle speed and monitors differences between rear and front wheels. 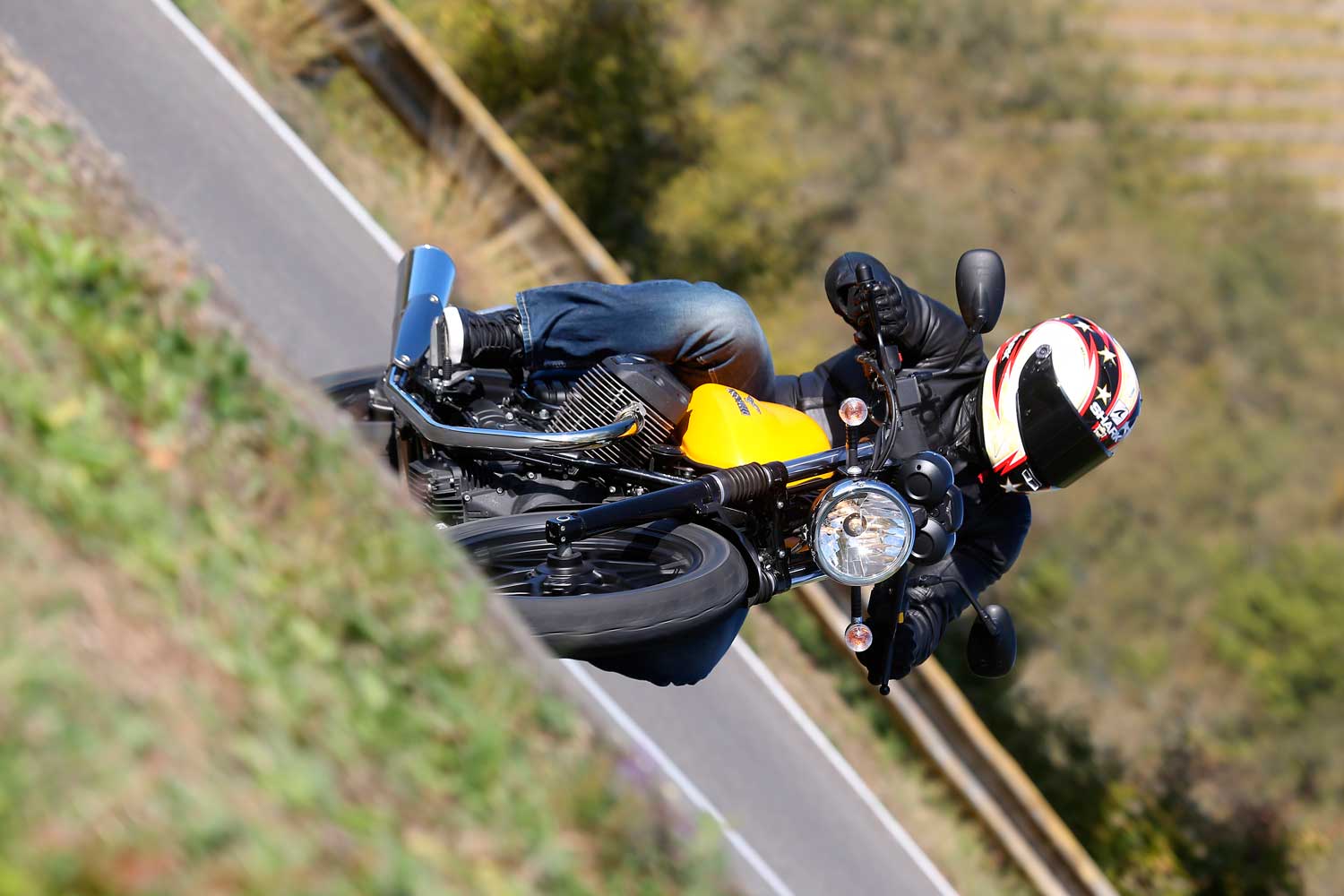 Don’t let the A2 compliance put you off – whether you’re a new rider or more experienced, the V7 could be for you. Inbuilt safety systems such as the ABS and the MGCT put riders’ minds at rest, and allow new bikers to build up their confidence. Even through it ‘only’ produces 48bhp, seasoned motorcyclists will still get off with a smile on their faces thanks to the throbbing ‘torquey’ way the power is delivered.

There are three versions available of the Mot Guzzi V7 II available: 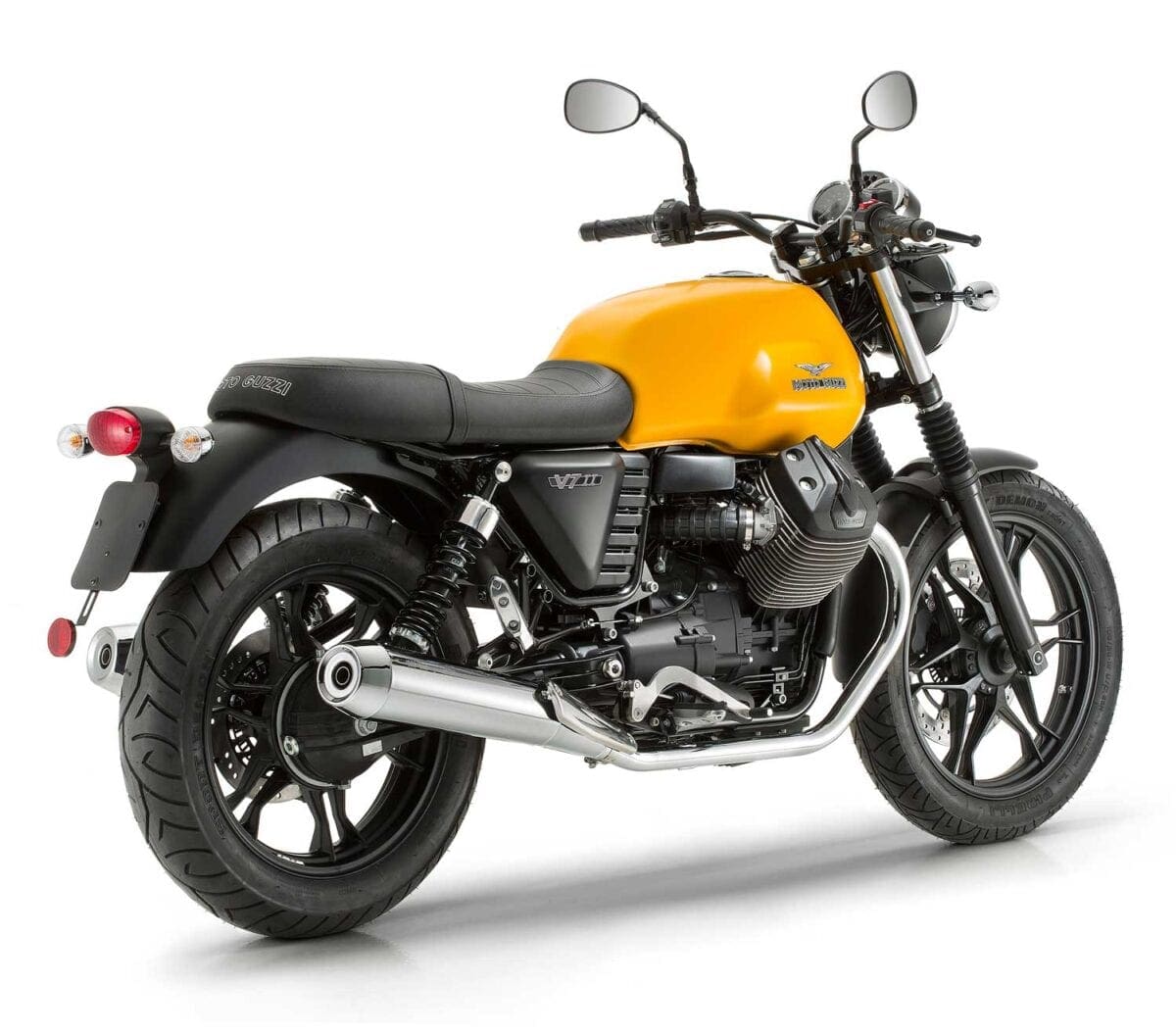 STONE The V7 II Stone now has new colour schemes: red, blue and black. They are all satin finishes with typically 1970s touches – Guzzi says that the frame has “more aesthetic welding where brilliant paintwork has been applied to enhance the ingenious architecture”. The rest of the bike is pretty much all black, apart from the chromed silencers, instruments, shock, tail-light assembly and the new brake and clutch levers. There are lightweight alloy rims on the Stone too, which help with the classic look. 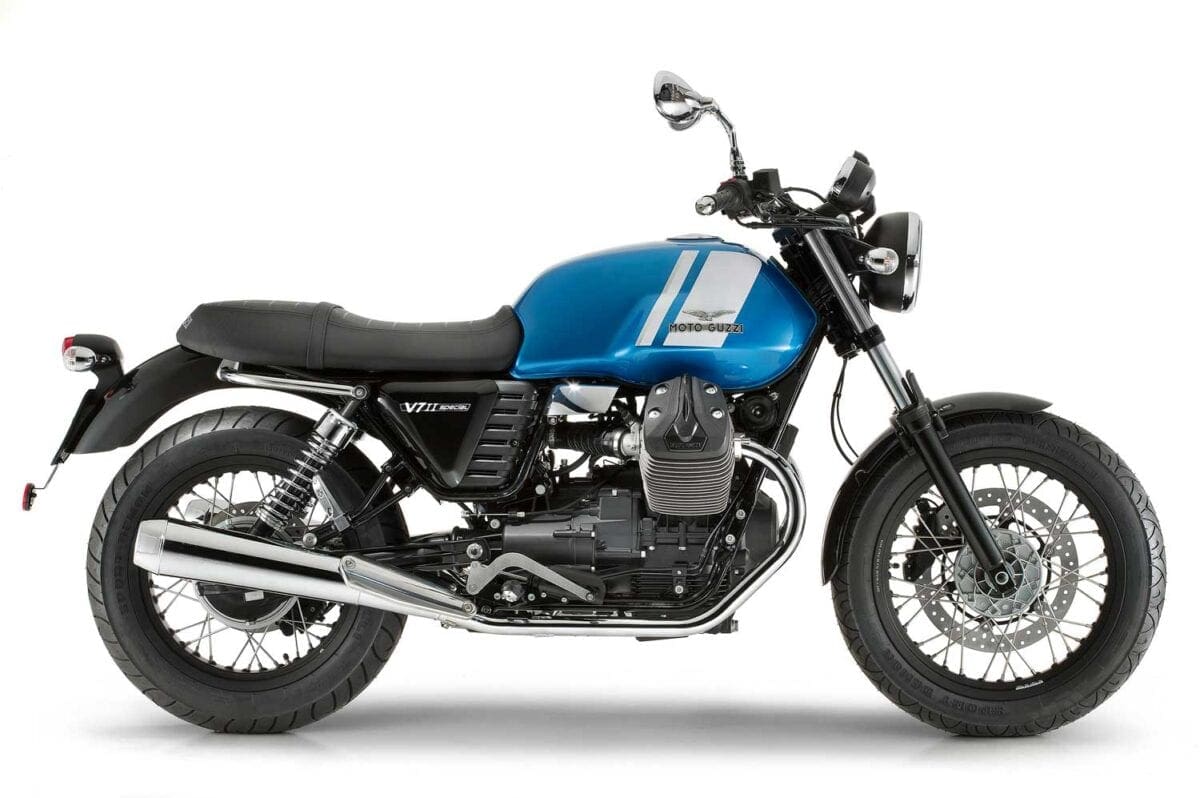 SPECIAL Of the V7 versions for next yea,r the Special is the one designed to be closest to the original 1975 V750 S3. The bike gets three colour schemes; classic black with orange stripes (like the original bike) and new schemes on metallic red and light blue with a silver stripe. The tank gets an embossed logo and the wheels – spoked with lightweight alloy rim channels – are also finished in black instead of chrome. Unlike the Stone and the Racer, the V7 Special has a fork stanchion protector instead of the dust boots that are fitted on the other models in the range. 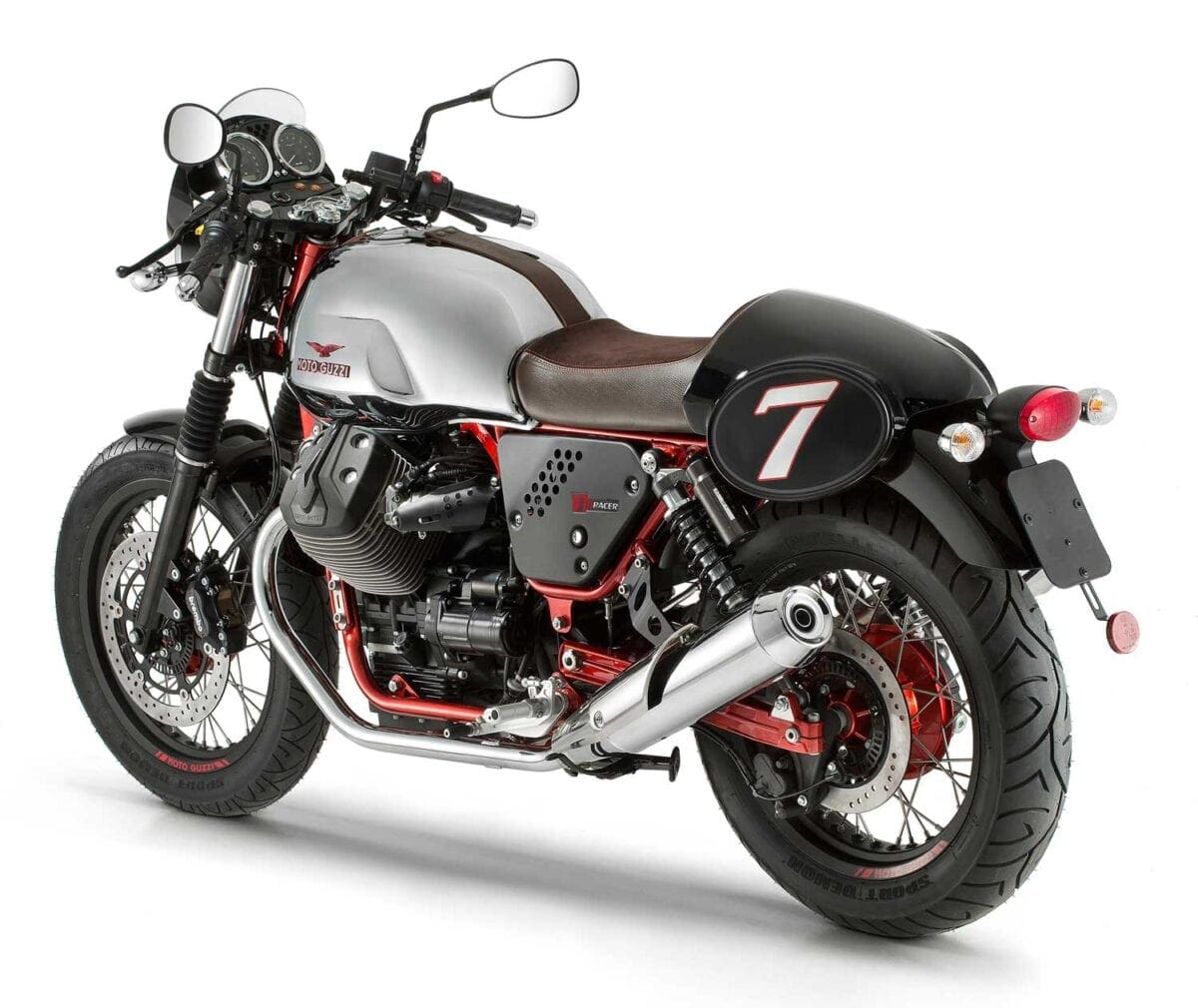 RACER It’s styled in the same way as the previous model, with a total-black look on the side panels, mirrors, silencer brackets and footrest guards which contrast with the bright 22 litre chrome fuel tank. In keeping with the numbers theme, the number “7” remains on the top and tail fairings (which in the Moto Guzzi world was a favourite for the 250 class world champion Enrico Lorenzetti).

The single seat saddle is also back (although a two-up saddle and passenger footpegs are available on request), covered in Alcantara and Skai to match the leather strap personalised with the Moto Guzzi logo that decorates the crest of the tank. The red frame is still there, and the Moto Guzzi name is also written in red where it appears on the wheels. Bitubo WMY01 shock absorbers with preload adjustment as well as rebound and compression are also used.

There are a number of accessory kit packs available to customise the V7 even further including: dark rider; scrambler; heritage and café racer, as well as a whole host of parts and accessories for you to bolt on to really make the machine your own.

I really believe that the recent resurgence in the classic market has a lot to do with the likes of the original ‘new’ V7 which reminded us all that motorcycling only really needs to be one thing: fun. Do we need 300bhp and superchargers? No. What we, and a host of new and old bikers need is to finish each ride with a bloody big smile on our faces; and with the V7 II you get that sensation whether it’s pottering through a town or slamming it around sweepers. And now all that fun is backed up by traction control and ABS. Mightily impressive stuff. 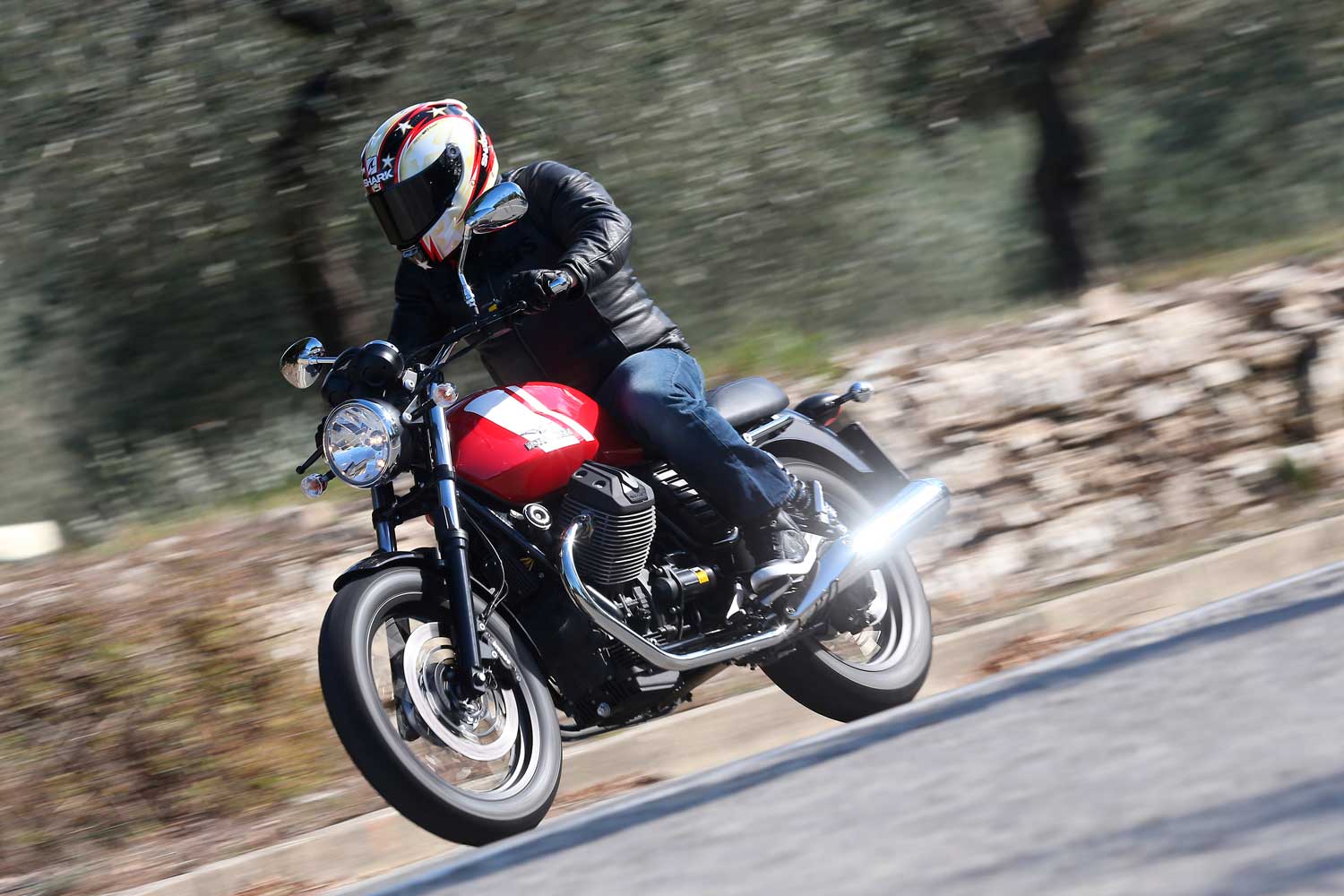 A few miles under our collective testing belts and the new, roomier riding position was feeling very welcome. More leg room, easier reach to the bars, a bit more upright – it all makes life that much easier when pottering through busy towns. It also tells you everything you need to know about what the bike’s doing through fast sweeping bends on questionable quality tarmac. In short, these changes work. The new tweaks to the geometry give this bike a more stable feel than the old version, yet it feels as light and neutral as ever.

The brakes don’t have much in the way of initial bite, but once you dial into how they feel there are no issues with the 320mm discs and four-pot calipers on the front wheel.

The Guzzi was a joy to ride on countryside back roads and fast, sweeping A roads. The engine fuelling was spot on, the chassis a treat which spoke to you all the time, and the riding position excellent. If this feels like I’m skimping on the detail about the ride then I kind of am – the V7 II is a simple bike that delivers a good, simple and fun ride.

There’s a marked difference between the Racer version and the others, and it really makes a difference to how much you’ll hustle the bike around. The Racer, naturally pitches you more forward because of the drop-bars and pulled-back footrests, and boy does it work. However don’t let that convince you that the Racer is more fun… they all just deliver their fun in a slightly different way.

48b horses have never been so much fun. Lots of ground clearance, lots of eagerness with a new gearbox, plus ABS and traction control. And it looks fantastic in any one of about a million guises that you can choose. 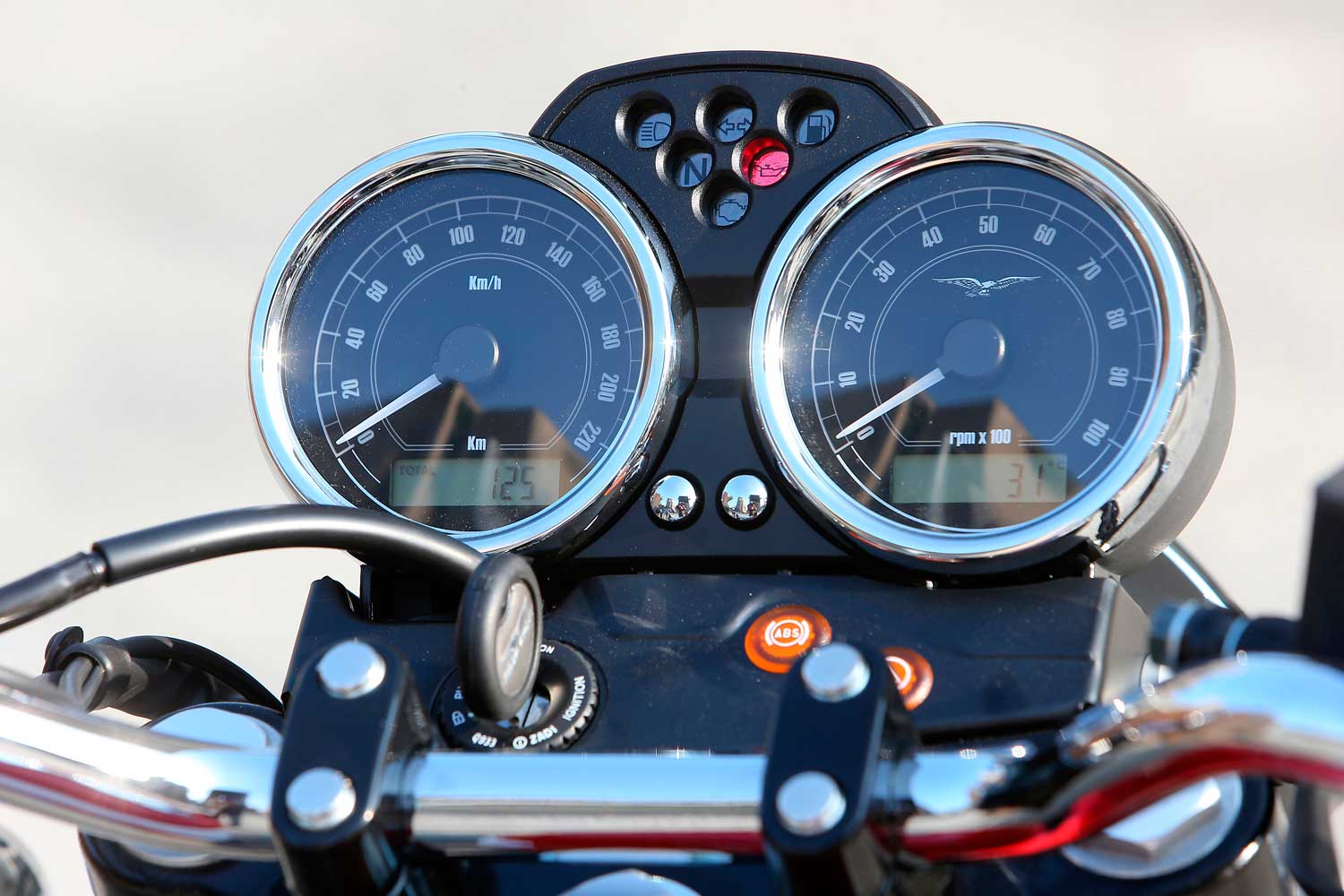 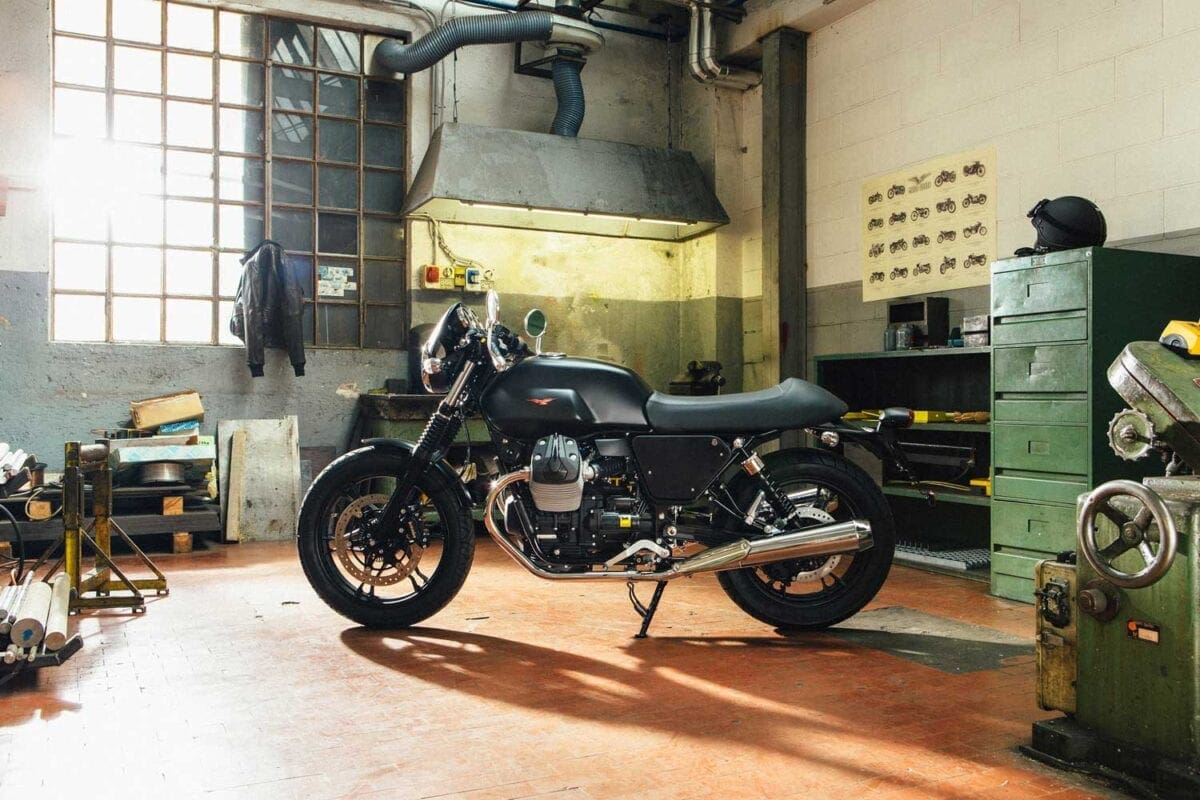 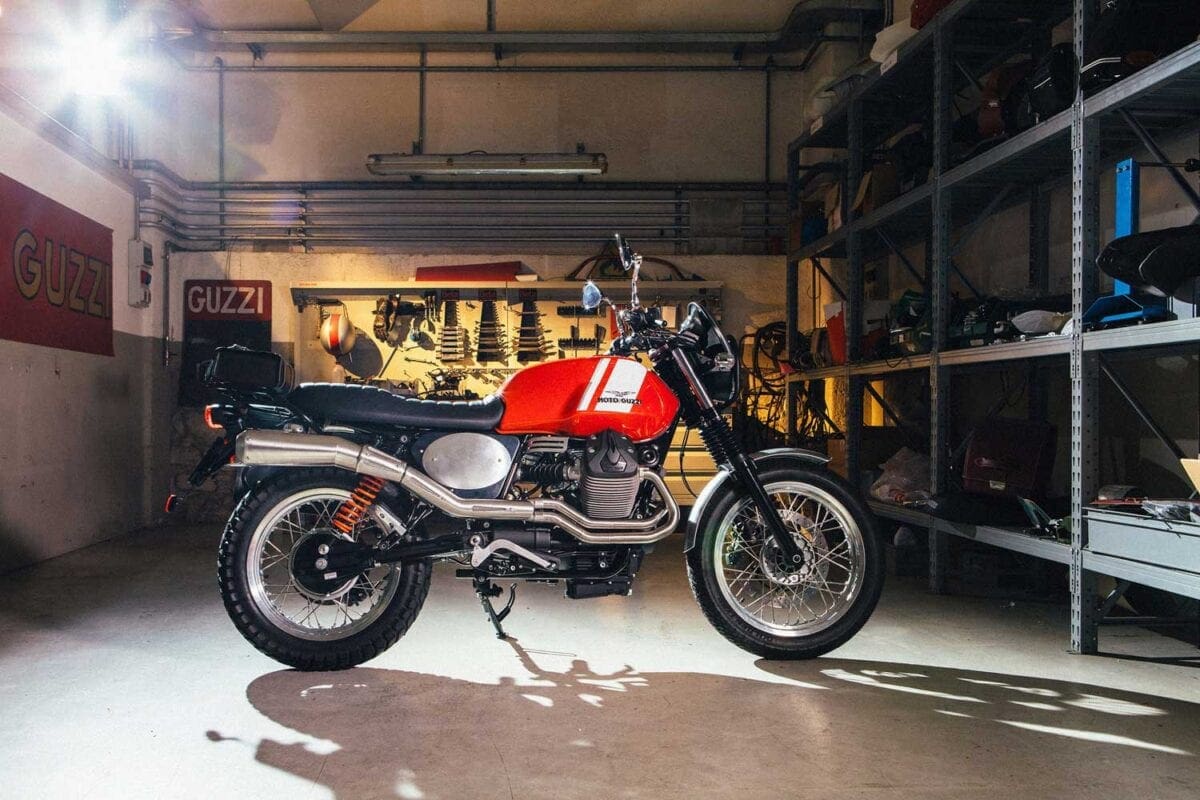 SCRAMBLER: 18 accessories to give the V7 a very on-trend look. Chrome aluminium is replaced by satin-finish aluminium. There are long satin-finish mudguard, high two-in-one exhaust, knobby off-road tyres, handlebar cross brace, off-road footpegs and long ’70s style vintage saddle to add some core elements to the scrambler look, which feel pretty much spot on. Not entirely sure about the leather tool bag and panniers though… 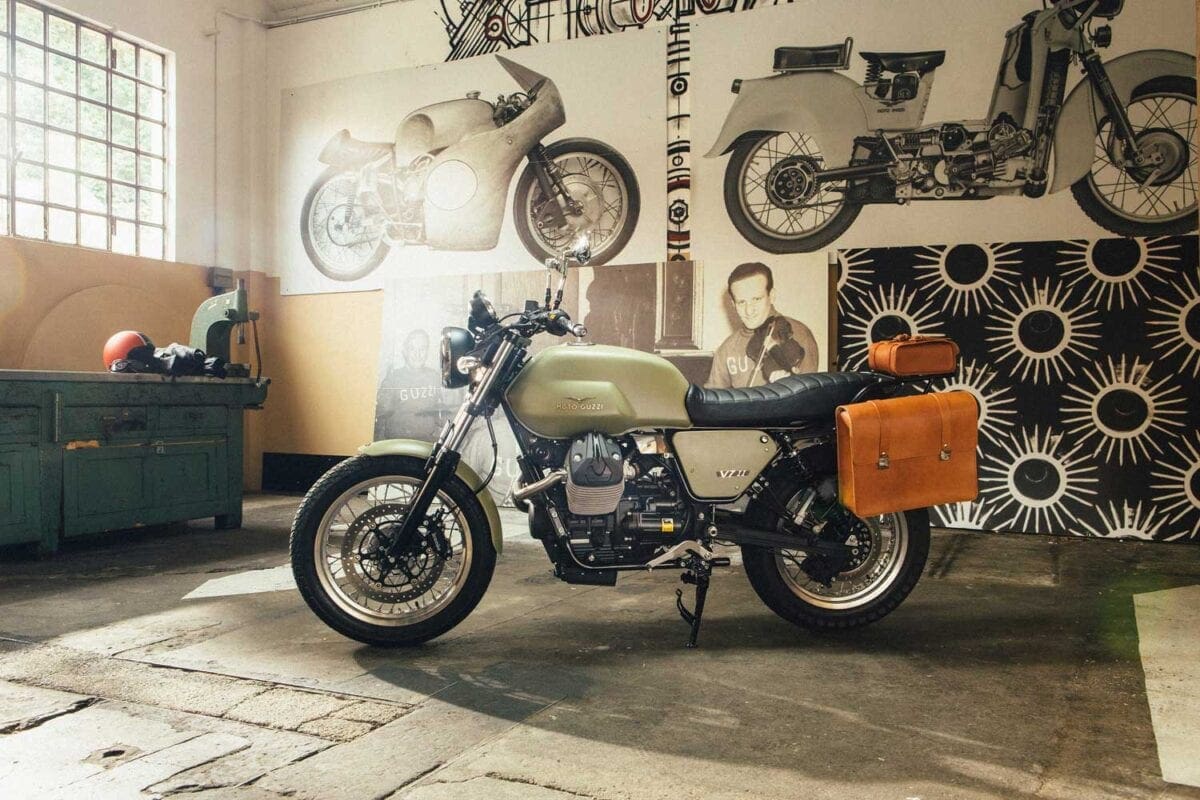 HERITAGE: Based on the 1940s Moto Guzzi Alce which was used by the Italian army, the kit gets a dark satin finish, high two-in-one silencer, knobby tyres and olive green fuel tank, side fairings and mudguard. The high handlebar cross brace, black luggage rack, and long seat all add to the look. More of that hand-crafted leather luggage though. 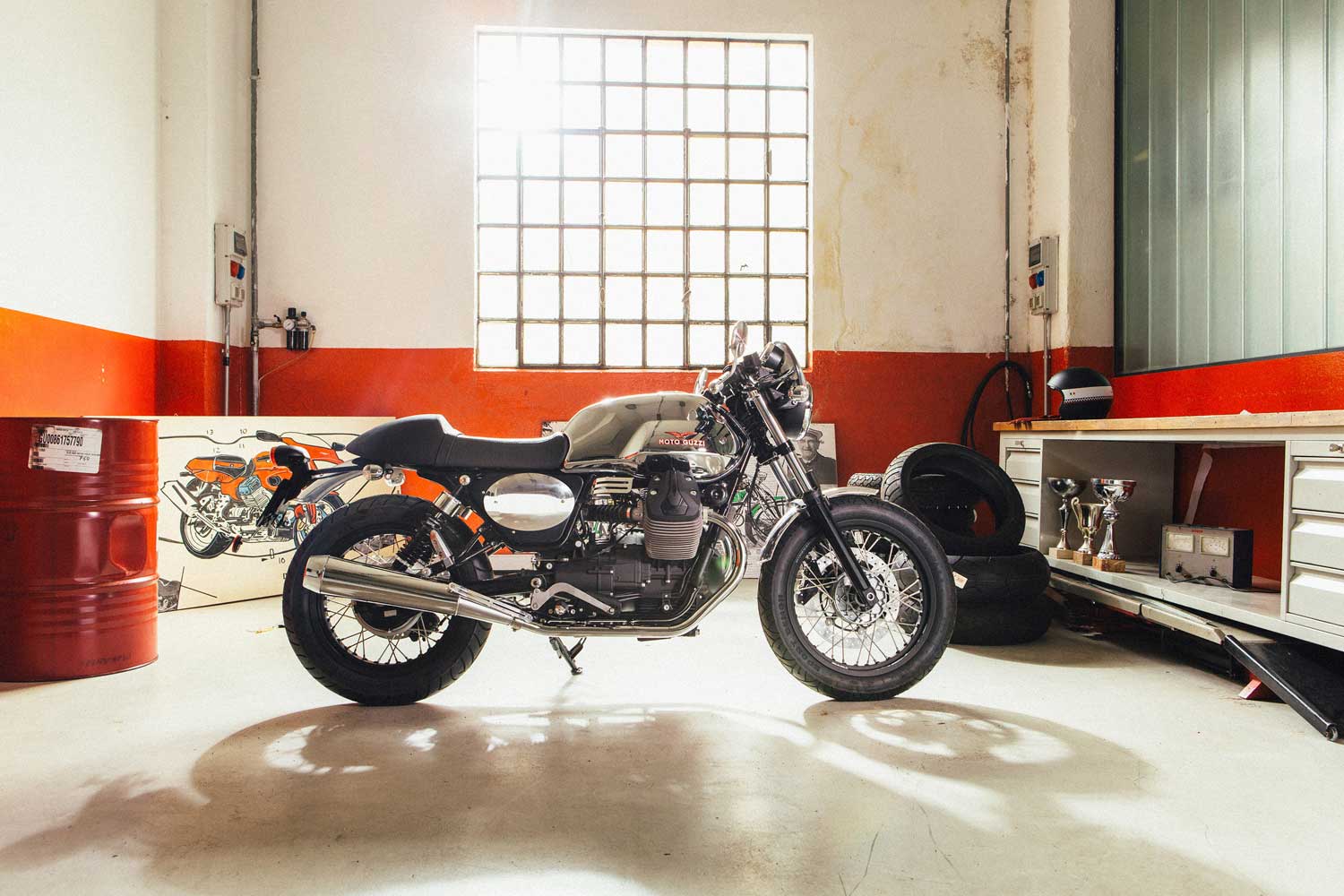