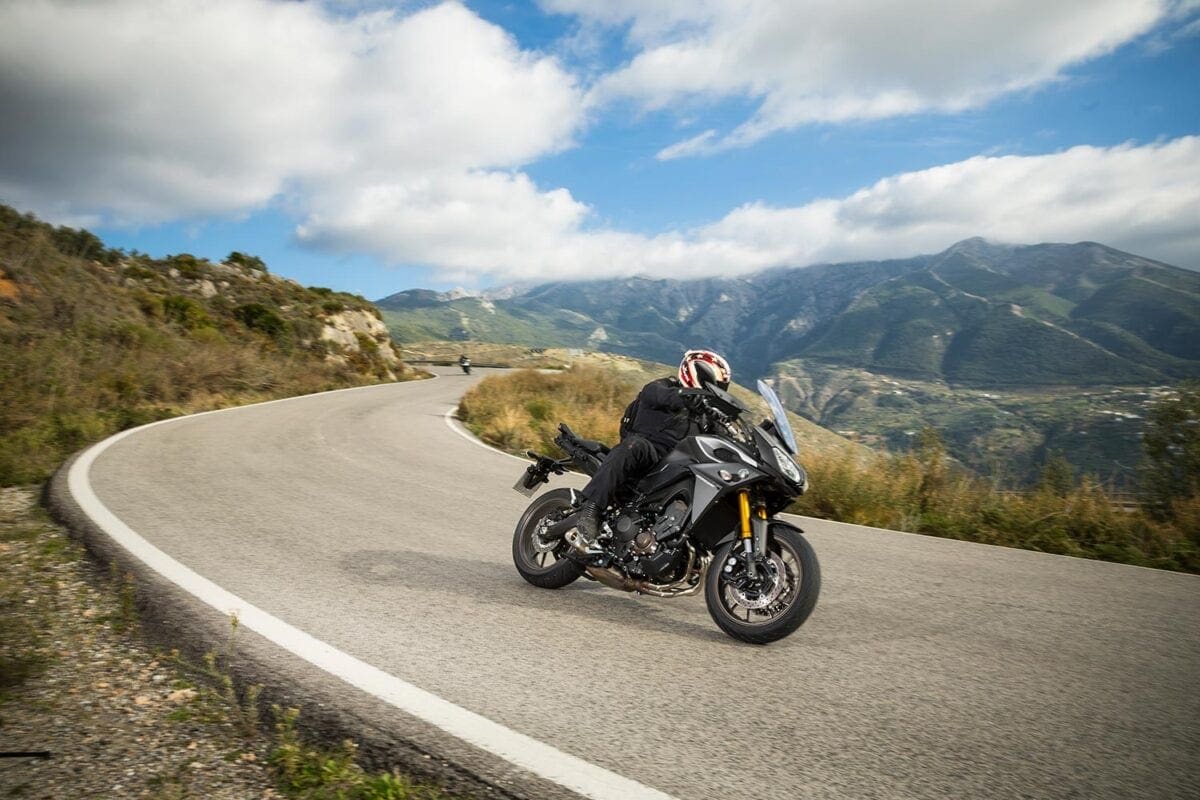 The MT-09 Tracer is the latest addition to the 10-model range of the MT family. A simple way to put it might be that it’s basically an MT-09 with a different top half, but what this new model adds up to, with its redesigned seating and wider bars, is the closest thing to a new Fazer 1000…

The Tracer keeps the MT-09’s engine – a liquid-cooled, 4-stroke, DOHC, 847cc triple. Unlike the MT-09 is comes with non-switchable ABS as standard, and has gained traction control, (which can be turned off). 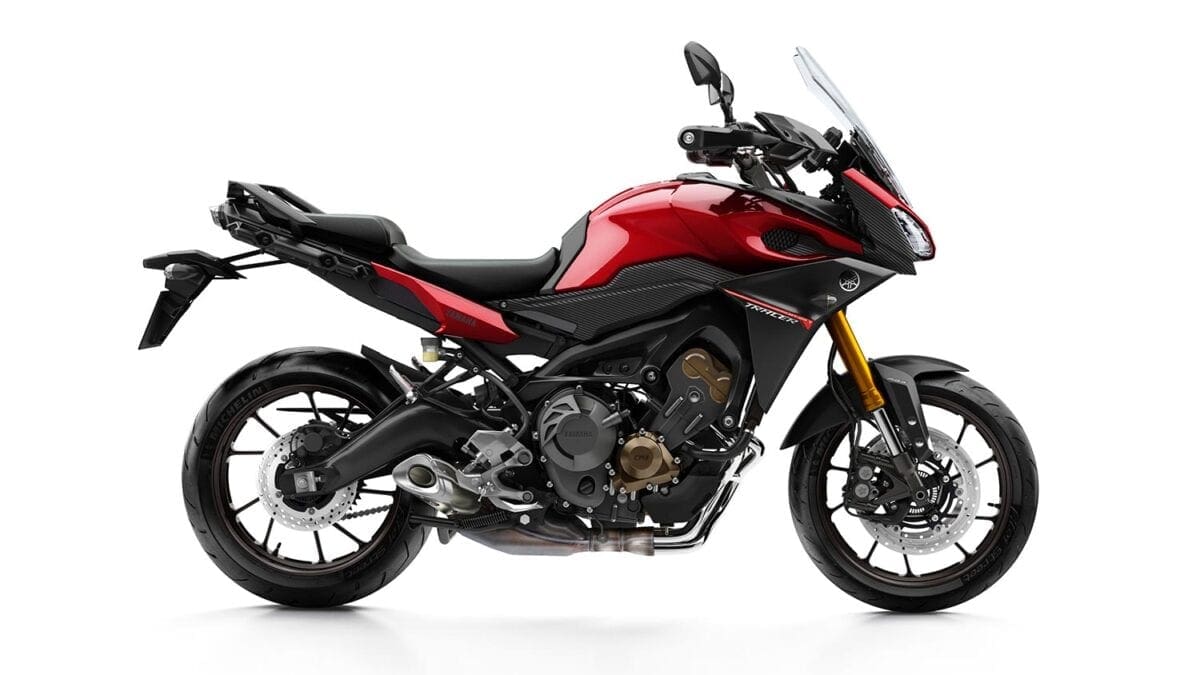 The Tracer beneifts from Yamaha’s third iteration of the MT-09’s fuelling map, which smoothes what started life as a rather snatchy throttle response; it’s now much easier to get on the throttle from very low revs, with the power delivered progressively way, really getting going from around 6000rpm. It’s not quite perfect though, with a touch of notchiness still present at very low revs, and if you grab a handful of throttle then you’ll instantly feel the cough of power as the engine wakes up. Still, compared to what we’ve had before this is a very significant step forward. 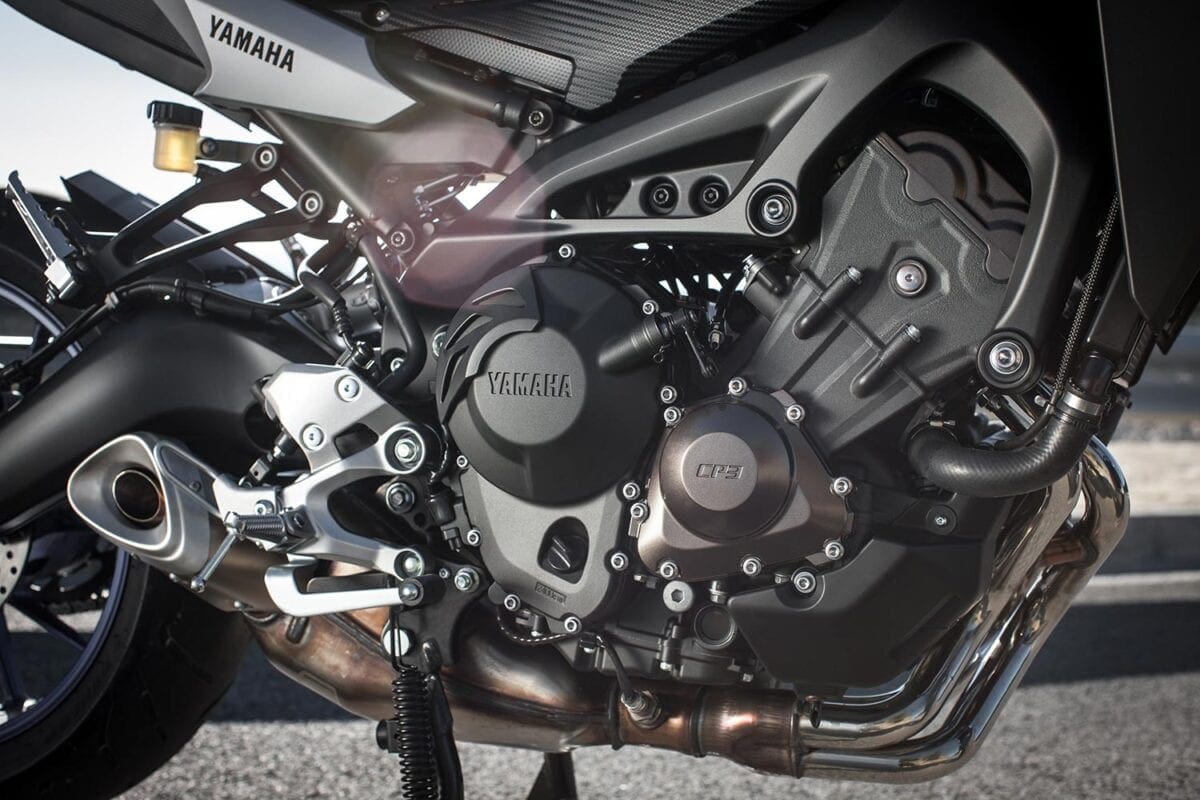 The Tracer gets three riding modes: ‘A’ is sportier than standard, giving the throttle a bit more aggression and picking the revs up in a more lively manner; ‘STANDARD’ is, well, standard; and ‘B’ calms everything down a bit, taking some punch out of the throttle. You can change the modes whilst riding by closing the throttle and pressing the ‘mode’ button on the right-hand switchgear. Switching off the ignition reverts it back to ‘STANDARD’ mode. 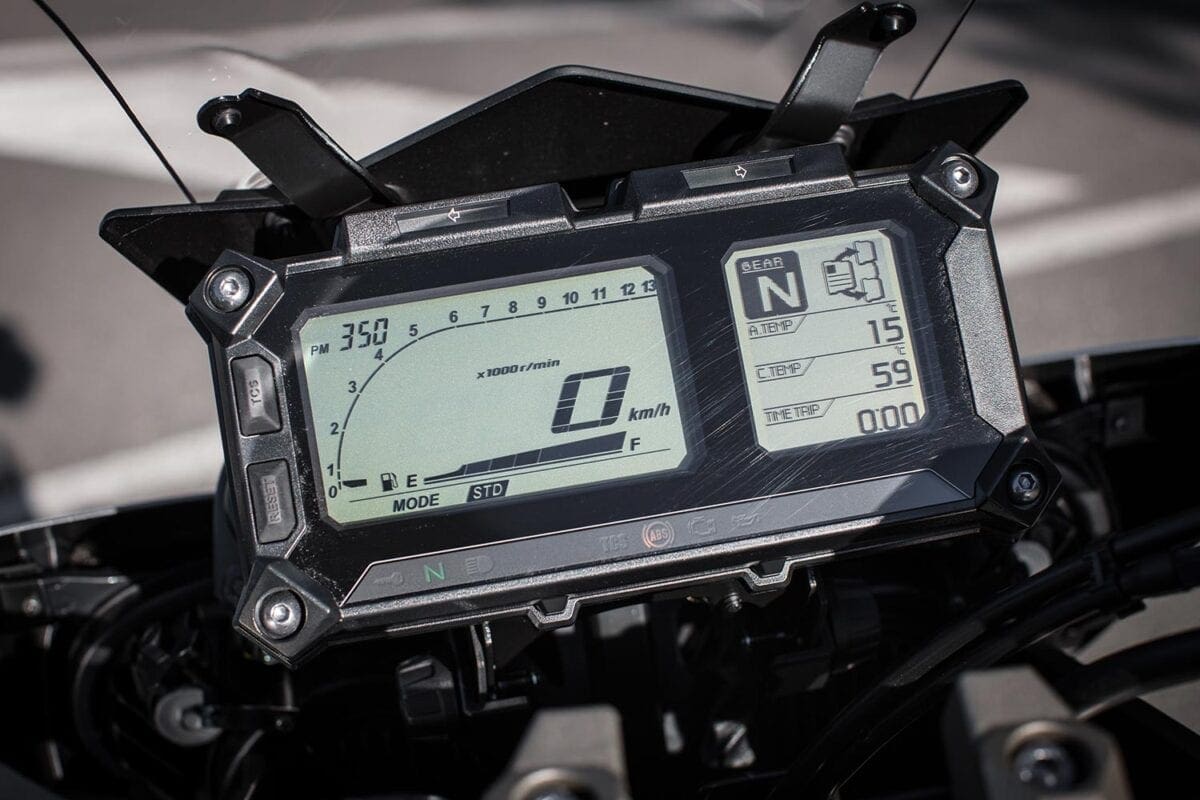 Comparisons to how the bike feels different to the MT-09 are obvious right from the off. The Tracer’s more upright riding position, wide bars and effectively tall fairing and screen are familiar fare with the trend for uprights these days, but the seat and footrest position give you a real ‘sit-in’ feel to the bike which makes for excellent leverage on the wide bars and low-speed manoeuvrability. 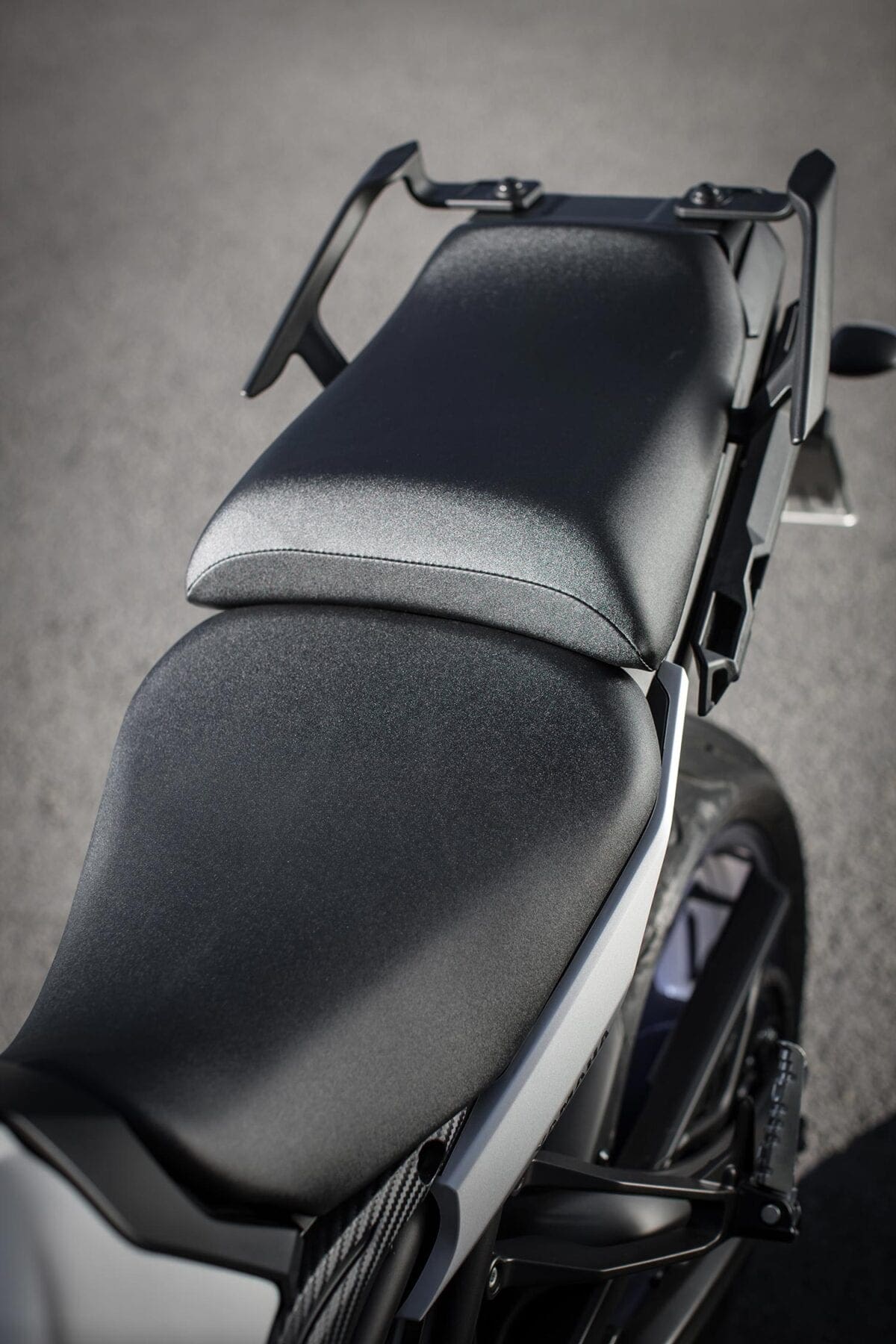 It’s got an 18 litre fuel tank – an extra 4 litres in comparison to the MT-09. Braking power is taken care of by twin 298mm front discs with radial mounted four-pot calipers, and a single 245mm rear disc with a single pot caliper.

The headlights are new on the Tracer… if you’re carrying a pillion or luggage (or both) you can tweak the light’s position without tools by turning two nifty clickers, one either side of the lights, to bring the beam back down onto the road. 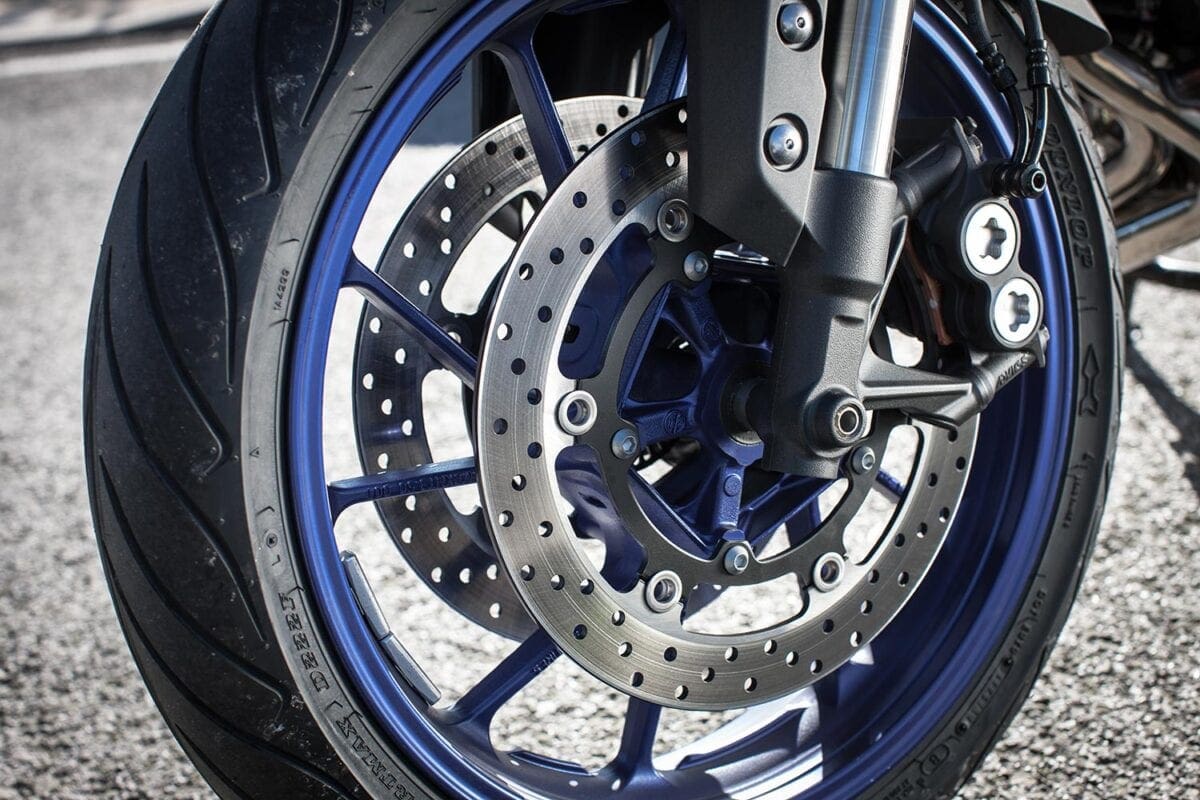 Sharing the same platform as the original bike, the Tracer is a Sports Tourer aimed squarely at the rider doing some miles on mid-to-big trips at some point, but for the most part this machine will be about the daily commute and the very frequent blast to find that silly smile that you only get from an excited and involving ride. For the OTR price of £8,149 – incredibly competitive in the marketplace – the Tracer deserves to sell by the bucketload. 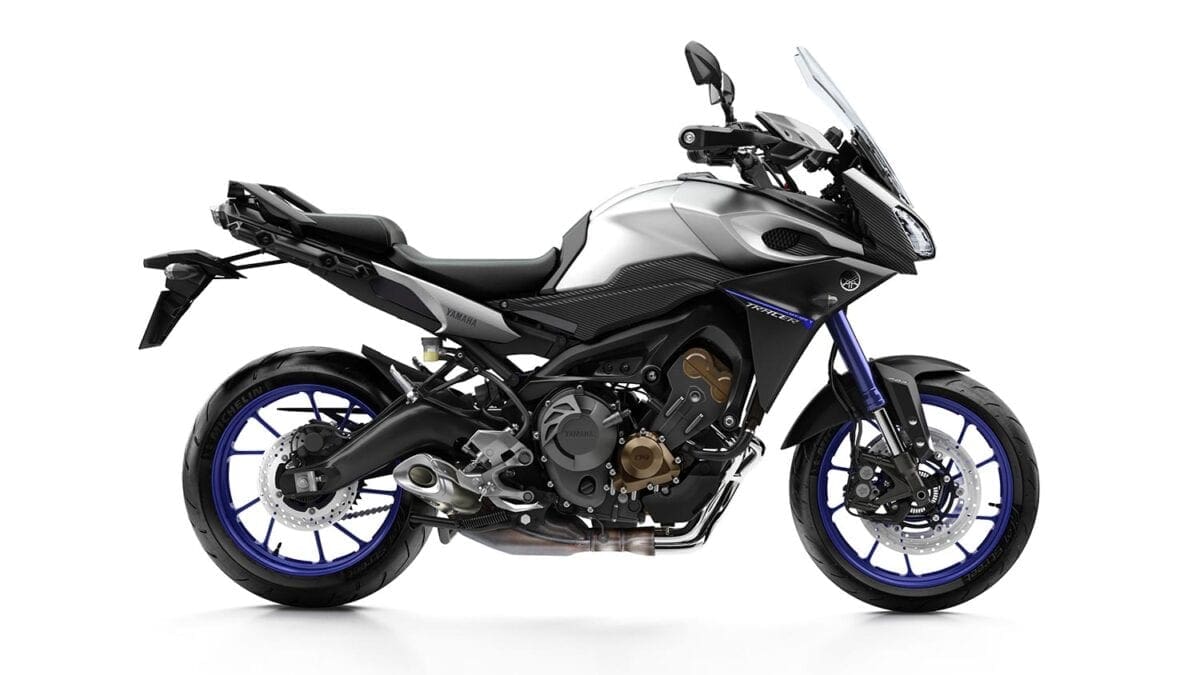 Traction control is commonplace on motorcycles these days, but the Tracer’s set-up isn’t quite as subtle as you might expect. During our 250km test ride in southern Spain, I had a couple of moments as the back stepped out. The feel of the bike when being pushed hard through slippery switchbacks treated with a fine layer of sand de Espania was surprising. When the bike slid, I could feel the traction control cutting the power and pulling the bike back into line. It’s possible that the way the system interacts with what the rider is asking for is deliberate, in which case this is one of Yamaha’s most clever aspects of the Tracer: by having the traction control cutting in just the smallest of beats behind what the rear tyre is doing, it allows you to feel the interruption and gain a really exciting and involving connection with the motorcycle underneath you. Sliding the back wheel on a bike might sound like a scary thing but the entire chassis of the Tracer is so easy-going that when combined with the very eager motor the whole movement of the bike and liveliness really makes a quick ride a lot of fun.

In fact, the engine delivers its power in such a satisfying way that you soon forget that this is an upright bike at all, crack the throttle hard and even with the traction control chirping away, the front tyre will still lift in third gear and skip a couple of inches off the road without concern. It’s a pleasure without the fear that things are about to get out of hand. 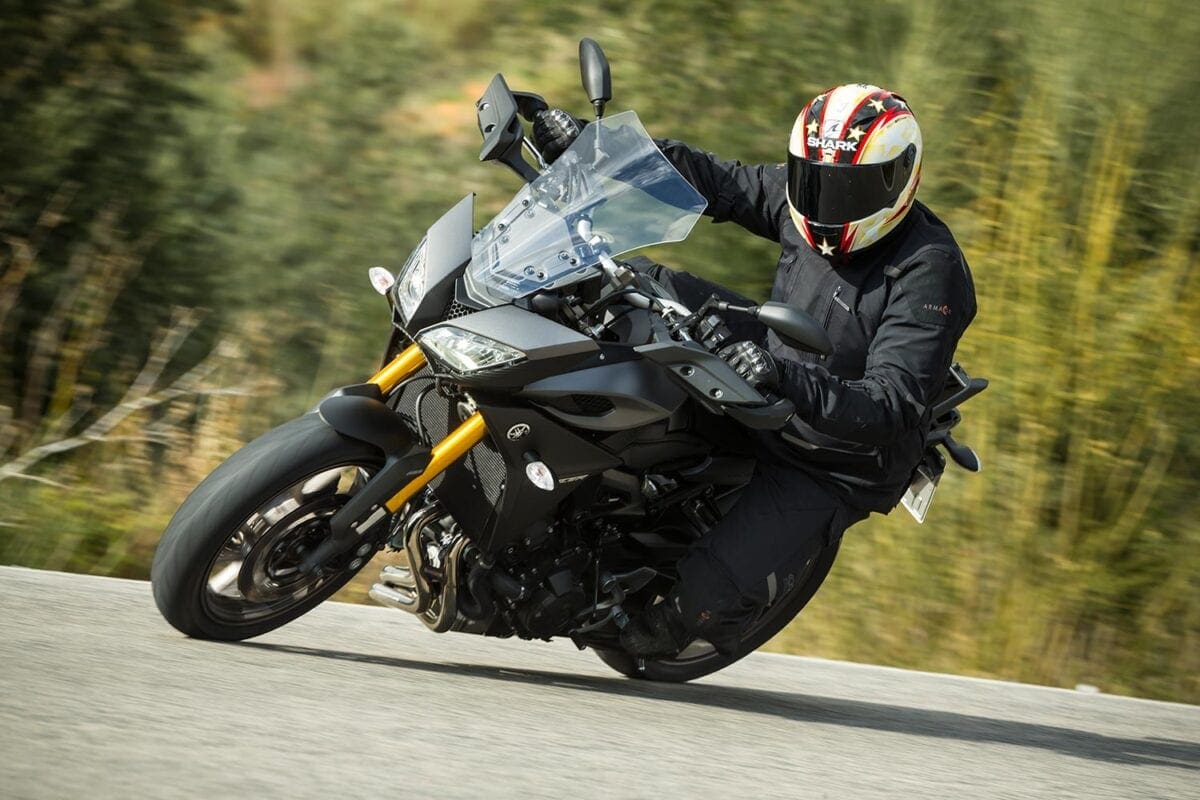 At very top-end motorway speeds there was some weave from the bike – let go of the bars and it feels like the fairing and adjustable-screen (large enough to keep a good deal of wind off you, but it flexes a lot) act as a sail, causing the wobble. Otherwise the fairing works well, although the standard-equipment handguards might look like they give good protection, they actually don’t. Very much all-show with little wind-resisting go.

There’s lots of room on the bike – the rider ‘triangle’ of hands, feet and backside are well positioned and upright enough with just the right amount of bias to the front lean to make you feel in tune with the eager motor. The gear selection is crisp and wonderfully light when racking up through the gears clutchlessly, and the switchgear is very easy to get on with.

But everything about the Tracer will come back to the quality of the ride and while the suspension – a 130mm progressive link shock and 41mm USD forks on the front – is soft and easy on the back, there’s still the element of vagueness on the front that lingers from the original MT-09. It’s only really noticeable when you’re pushing the bike hard through very tight corners. Will it worry 99% of buyers of this bike? Probably not. But it’s there, although I’d happily bet that with more time on the bike it could be dialled out fairly easily. 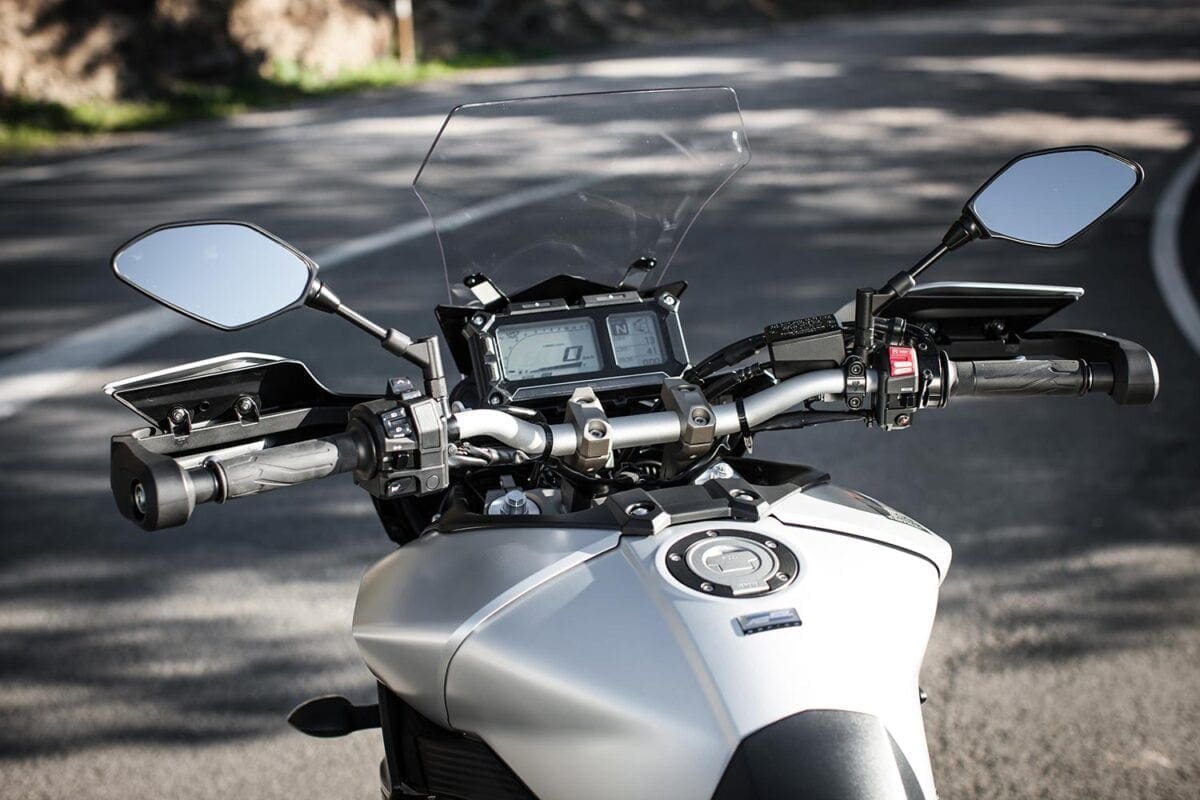 The motor is the most brilliant part of this machine. With the standard exhaust it’s too quiet for my ears, but the way the three-cylinder motor delivers the power is lush. Early revs are fine enough, there’s a relative dull bit from 4000-6000rpm which is Ok for pottering through villages, but get the motor spinning and you get reward upon reward. The Tracer is fast, neutral and involving. Like all good Yamahas over the years there’s an element of character that means that you’ve got to do some of the work to get that reward, but it’s worth the effort.

The Tracer isn’t a bike that effortlessly carries you from one point to another, instead you and the bike work together to achieve a good ride. And I like that. Yamaha has always been a rider’s type of bike builder and the Tracer rights some of the bigger issues I had with the MT-09 originally. Yes, there are quirks and oddities still here but as a package it’s a great bike to ride and enjoy.

The seat’s been tweaked a bit, and the pillion perch is more plush than on the MT-09 – some taller pillions may find that the pegs are a bit too close to the bum so may feel a touch cramped.

Available from mid-February for that very good £8,149 price tag, this is a helluva machine (and one that’s more fun than about 90% of everything else that’s called a Sport Tourer these days).

It’s like a grown-up’s RD350. Sensible and silly enough to tick boxes and leave you smiling each time. The best bike of the MT family so far. 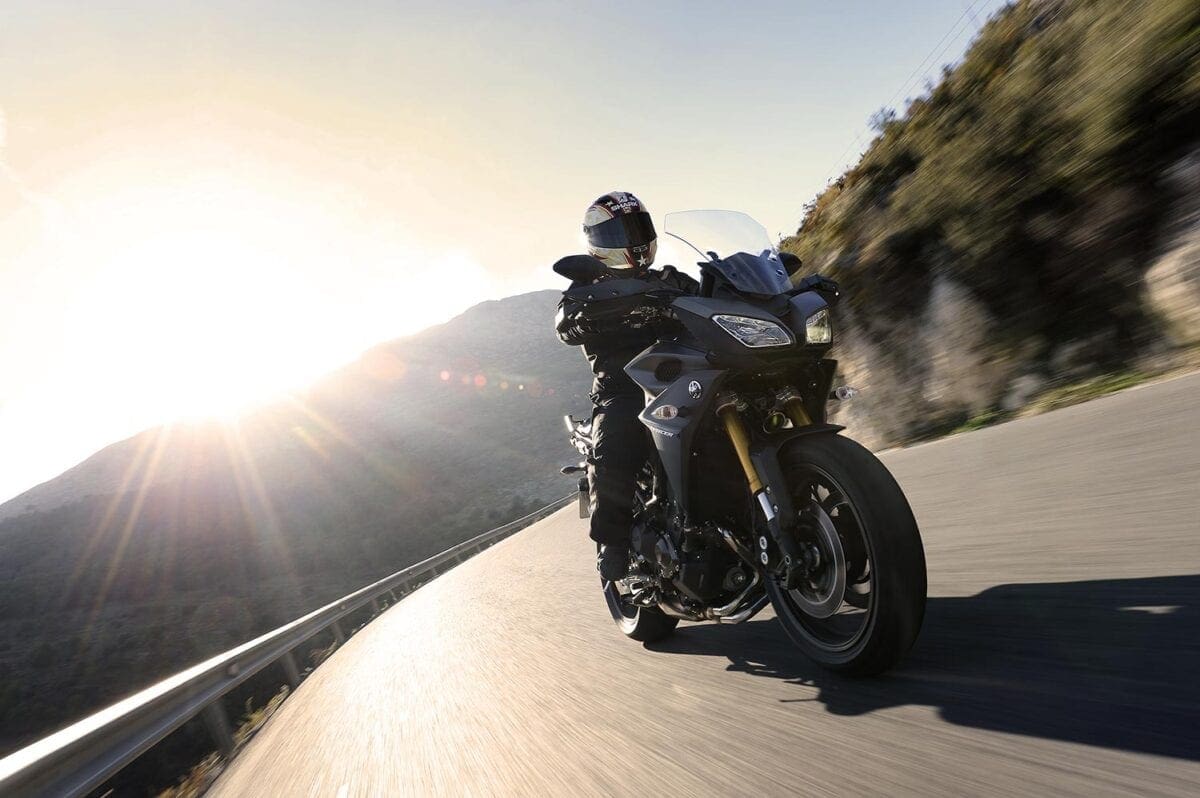