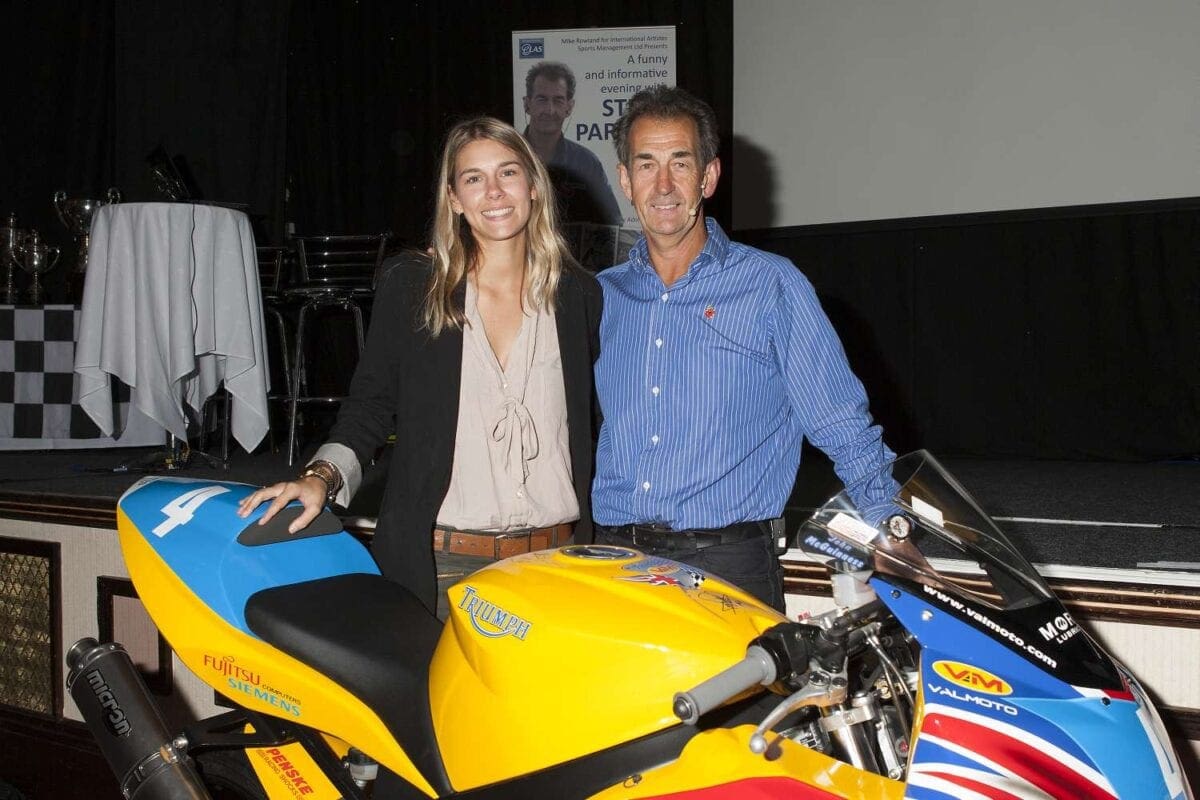 BBC commentator, ex motorcycle & truck racer and the eternal practical joker, Steve Parrish, has added more dates to his already successful MAD Tour (My Adolescent Dad) so more people can enjoy an evening of funny stories, moving tales and his passion for living life to the full!

Enjoy the life and times of Steve Parrish (Stavros) which provide a completely different, colorful, humorous and, at times daring portrayal of this man’s career. Steve Parrish raced at the highest level of motorcycle racing, becoming British Champion in 1976 and 5th in the 1977 500cc World Championship, as team mate to that year’s champion Barry Sheene. Barry who met Steve in 1975 is quoted as saying “if he was to set up his bike as well as his victims and had put as much effort into the bike as he did the intricate pranks he pulled on people he would certainly have been a World Champion.”

Steve then dabbled with sports car racing before moving to truck racing “because it was less painful than riding bikes” where he won 5 European Truck Racing titles for Mercedes Benz. Steve is currently the BBC commentator for Moto GP and has been commentating since 1988, but he is equally famous in the world of motorsport for his pranks, and the real reason for this show.

With a life full of scrapes, near misses and funnies, including riding Barry Sheene’s bike to qualifying for the world champion, filling rooms of sports personalities with live frogs, and jumping hire cars from second floor car parks in Daytona onto the beach. The list is endless! His antics have led to a visit from “Beadles About” and have also seen him locked up in a Macau jail for blowing up a brothel. Steve flies his own 4 seat aircraft, plays golf badly, shoots clays, hosts track days and even has an entry in the Guinness Book of Records, he attends after dinner events as a guest speaker, all of which offer more opportunities and more victims.

Joining Steve on stage and leading the proceedings will be Steve’s daughter Frankie, who has lived with her father’s antics and the embarrassment’s that it brings, for example being driven to school in a car which number plate reads “PENI5” and on occasions in a hearse.

People who have already seen the show are returning to hear more of the stories:

Sam Corser tweeted ‘I laughed, I cried & I cried laughing, bloody brilliant’
Mike Jackson Journalist said “The best of many hilarious stories were the infamous practical jokes that somehow went pear-shaped; genuinely, I’ve not laughed so much for years”
Nick from Kent tweeted ‘Stavros is polished, funny and inspirational’
Another tweet from the hundreds received said ‘What a fantastic night, Steve must be the funniest man I’ve ever seen’

If you can’t wait for the tour then check out our podcast with the man himself:

Steve and Frankie will be at the following locations – all shows start at 7.30pm, please pre-book your ticket in advance.

For more details about the MAD Tour check out www.madtour.co.uk and for more information about Steve, please visit: www.steveparrishracing.com