Richard Sinclair is usually found on the advertising team at MoreBikes HQ – but after years of working around motorcycles, this week he is finally taking the plunge and getting his licence! He’s joined the guys at BMW Rider Training for a week of intensive training. Today Richard took his module one… 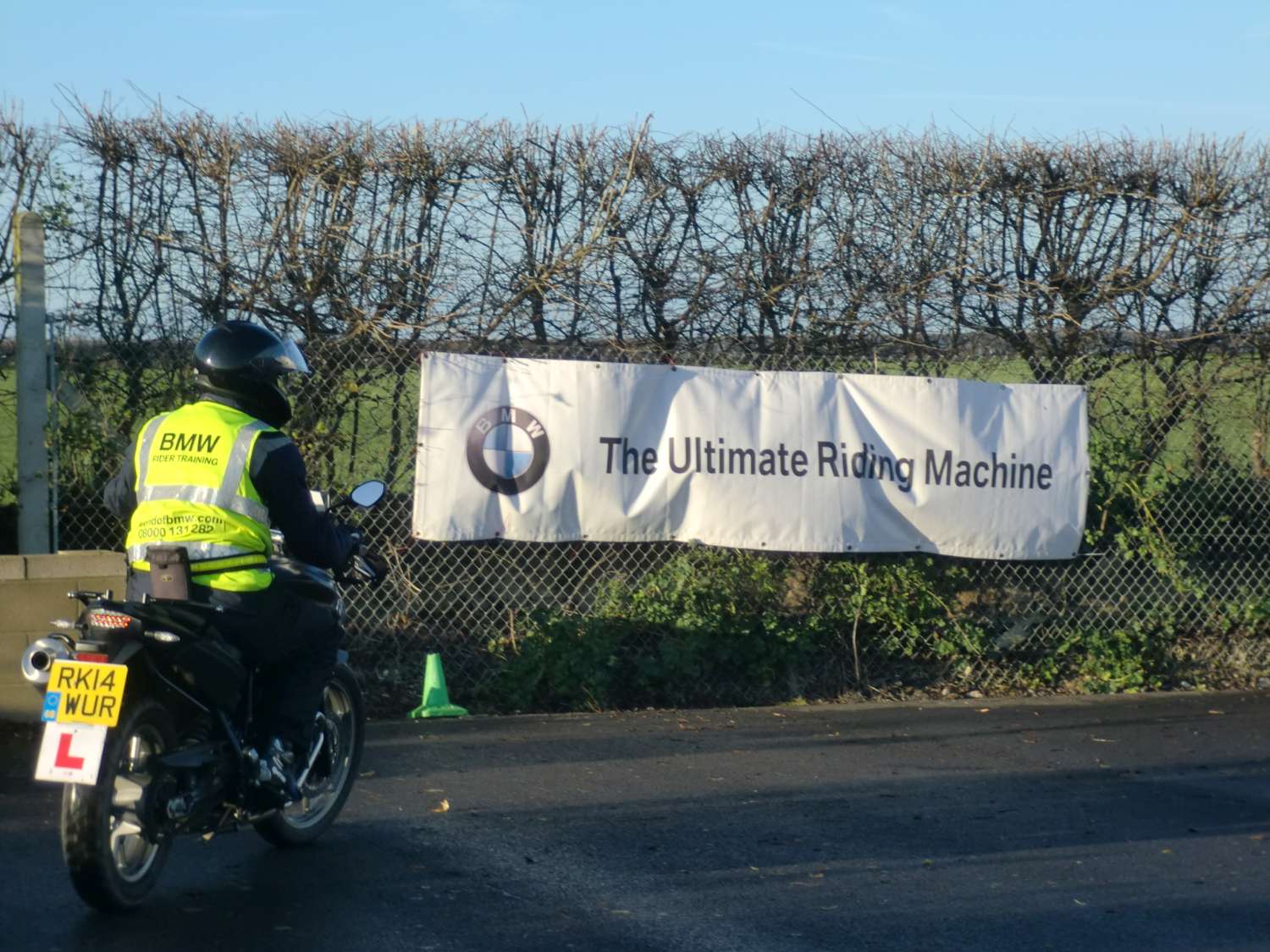 Module 1 was booked in for 11.15am this morning, so shortly after arriving we kitted up and went over to the training pad for a final practice on the slalom, figure of 8 and u-turn parts of the test.

Taking into account everything I had learnt from the week, I was cruising through the cones perfectly and it was pretty much faultless. So after a few practice runs, we moved onto the tarmac roads around the trading estate to give emergency stops another go, which was something I had been struggling with before.

First attempt wasn’t good enough, as I wasn’t bringing in the front brake enough and after a few wise words from Ian I made it back up to the start point and when my fellow trainee did his run I practiced building the pressure on the brake, and the next three attempts were absolutely perfect.

So we stopped for a quick brew before heading off the long way around to the training centre for the module one test. Ian had booked in four Module 1 tests today, one for our group of two, Gavin who started a 5 day course on Monday after a break from riding and a lady who joined us today having previously failed for striking a cone on the swerve test last week.

I was feeling a bit nervous but on the way to the motorcycle bay the examiner was friendly and that soon put me at ease. The first task was to manoeuvre the bike into the test course, and to park in one of the green bays, so checks all done and that was simple enough. Following this I had to walk the bike from one green bay, into the other and that was all fine and dandy.

Next the map came out and orders to slalom through the cones, and to make two figure of 8’s around the blue cones and I will instruct you over to me, so deep breath, thought through what I was going to do, made my checks and yes, all went to plan!

Onto the slow speed manoeuvre, as if I was following traffic and to stop with my front wheel in the blue cones, this morning I had done this a little fast on one occasion, however this was a breeze, except I realised a little to late I forgot my checks, which resulted in 1 minor.

‘Please turn your bike around, keeping it within the white lines.’ I paused to compose myself, took a right check, moved forwards, life saver and turned…. And just as I almost completed the turn I switched off the throttle and my left leg came off the bike as I lost balance, and then I knew it was game over…. Why oh why did I not just put on more throttle? Surely anything would have been better than putting my foot out! Instant fail.

We still went onto the rest of the test which included the controlled stop, emergency stop and swerve test so even though I had ran wide on the turn a few times the day before I had challenged that corner perfectly and I only picked up one more minor. This was from the emergency stop, where I went through the speed trap at 48kph which was within 10% of the requirement but is a minor. If I had been over 10% I would have been allowed another go, for the swerve test I managed 55kph.

All in all it wasn’t a bad day though as the other two had passed and got their module 1 certificate. Yes, I’m disappointed, I know I may not be picking up this motorcycling as quick as others, but I could have lived with passing module 1 and adding more refinement to my riding as it progressed though the week, and even if I did fail module 2 I am sure I wouldn’t have been as disappointed as I am today.

We had a good afternoon out on the roads, and when we arrive back at HQ I was talking about where do I go next, he is going to work with me to refine areas of my riding and then offer some advice afterwards, so there is still plenty to do here this week.