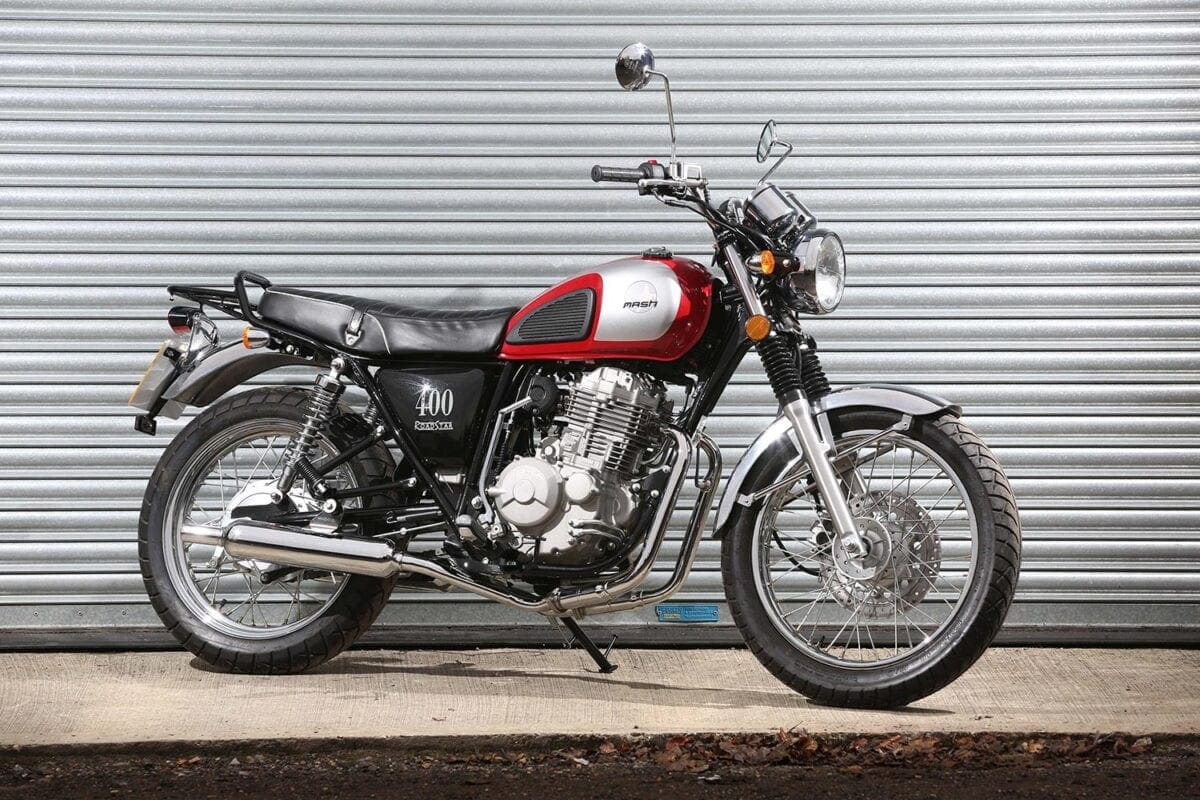 The Mash is that rare thing in motorcycling; an entirely new brand. Yet the Roadstar 400 is based around 1980s technology. This bike is really about its cool retro styling – a canny mix of late 1960s British with late ’70s Japanese. Launched in Europe in October, bikes are now trickling into UK dealers.

The idea, says the British importer, is for a simple bike that should be easy to ride, cheap to run and able to hit a nostalgia chord with those of a certain age, plus attract younger riders as their first step up from a 125. 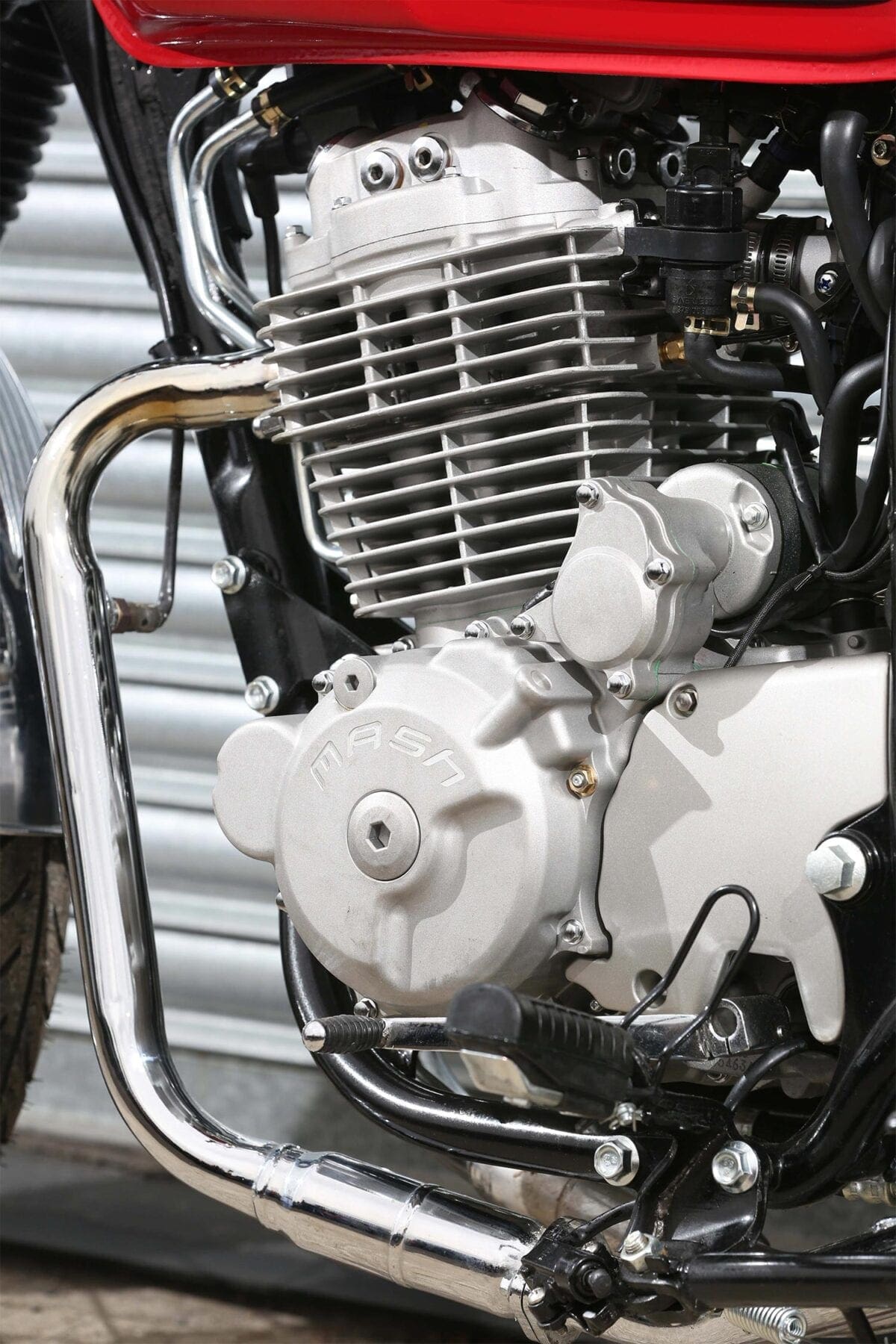 If the engine looks familiar, and your memory stretches back as far as 1985, that’s because it’s Honda’s old XBR unit; an air-cooled overhead-cam four-valve single with contra-rotating balance shaft. Even in the ’80s, it was a bit of a retro, powering the XBR500, which Honda hoped would be a modern equivalent to the Gold Star or Velocette, especially to misty-eyed Brits. It didn’t quite turn out like that, but still, with those lovely alloy cooling fins and compact size, it suits the retro Roadstar to a tee.

Of course, it isn’t the same engine Honda dealers were trying to sell us 30 years ago. For a start, it’s not made by Honda any more, but by Shineray in China, that builds the whole bike. It’s smaller than the original, down to 398cc from 498cc, and has acquired Siemens fuel injection. To thoroughly clean the emissions up, small catalysts are hidden inside the ’60s style silencers, of which there are two, with twin pipes sprouting out of the twin-port head.

The gearbox, as Honda intended, is a five-speeder, though this should offer enough ratios, given the single’s relaxed power delivery.

No ABS, no linked brakes, no traction control or multi-adjustable suspension… the Roadstar has a supremely simple chassis, with everything held together by a straightforward tubular steel cradle frame. At one end are non-adjustable 35mm forks, and at the other twin shocks, though they can be adjusted for pre-load (with a C-spanner – none of your remote control here).

It has to have spoked wheels of course, and the rims are chromed steel, not alloy, while the tyres are Chinese-made Kenda Cruiser S/Ts. The brakes are deliberately retro, with a 160mm drum at the rear supplementing the single 280mm front disc, though this does have a more modern two-pot caliper, because you can take this retro thing too far.

The geometry is relaxed, something underlined by the 19-inch front wheel, with an 18-inch rear. This bike is designed with B road fun in mind, but nothing more ambitious than that. 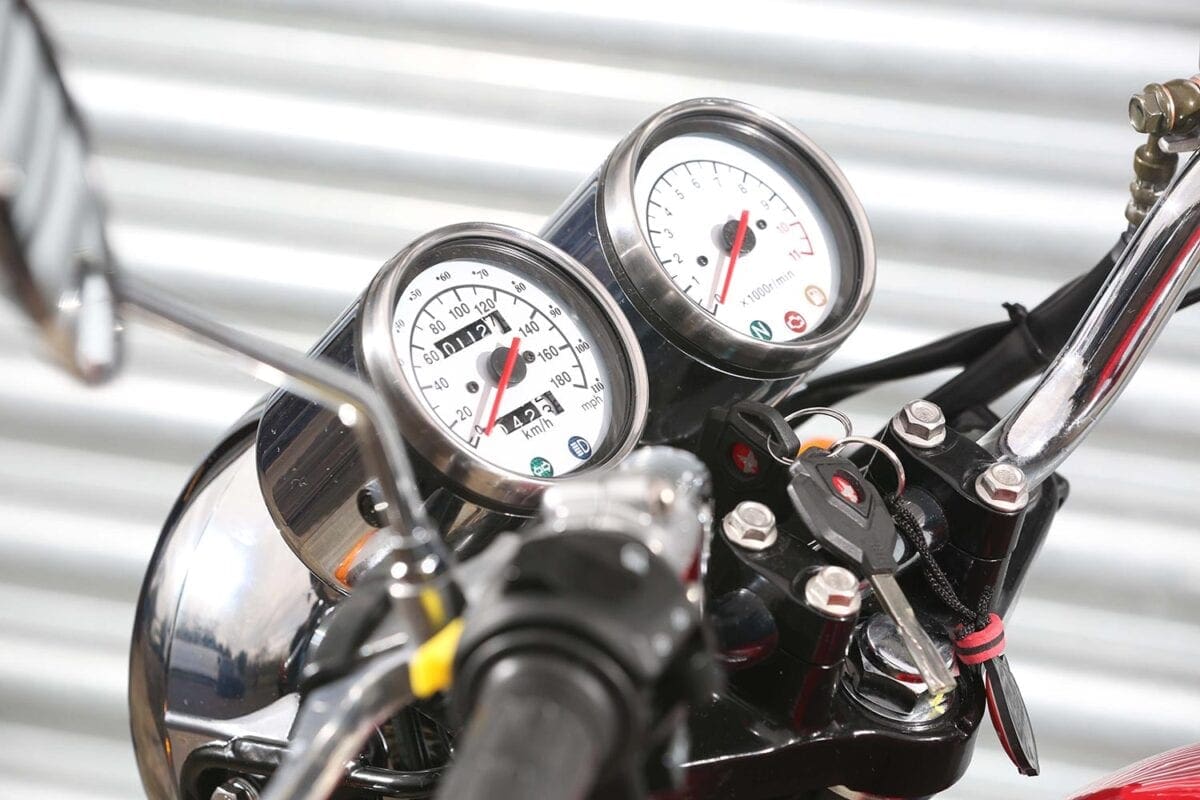 With just 29bhp, the Roadstar easily fits into the A2 licence category, but it should also fit the bill for those with a full licence looking to downsize. Why? Because it’s very easy and unintimidating to ride, to the extent that 20-somethings might want a bit more of a challenge.

For everyone else, the Mash has an upright riding position that catches the wind at high speed but is comfy enough below 70mph. The Roadstar is small, slim and lightweight, and in fact it would make a decent commuter, assuming the finish holds up through UK winter salt and slush. All right, this bike is made in China, but it does appear to be pretty well put together, with neat welds, nice paintwork and a lot of stainless bolts.

The UK importer is promising a whole list of options, including a centre stand and three different screens. And fitting in with the need to build a new brand, Mash jackets and helmets will be on offer as well.

The Roadstar comes at a good price – £3799 makes it slightly less than the cheapest Royal Enfield Bullet, and over £1000 shy of a Yamaha SR400. If you care about badges though, both of those have a tad more back story… 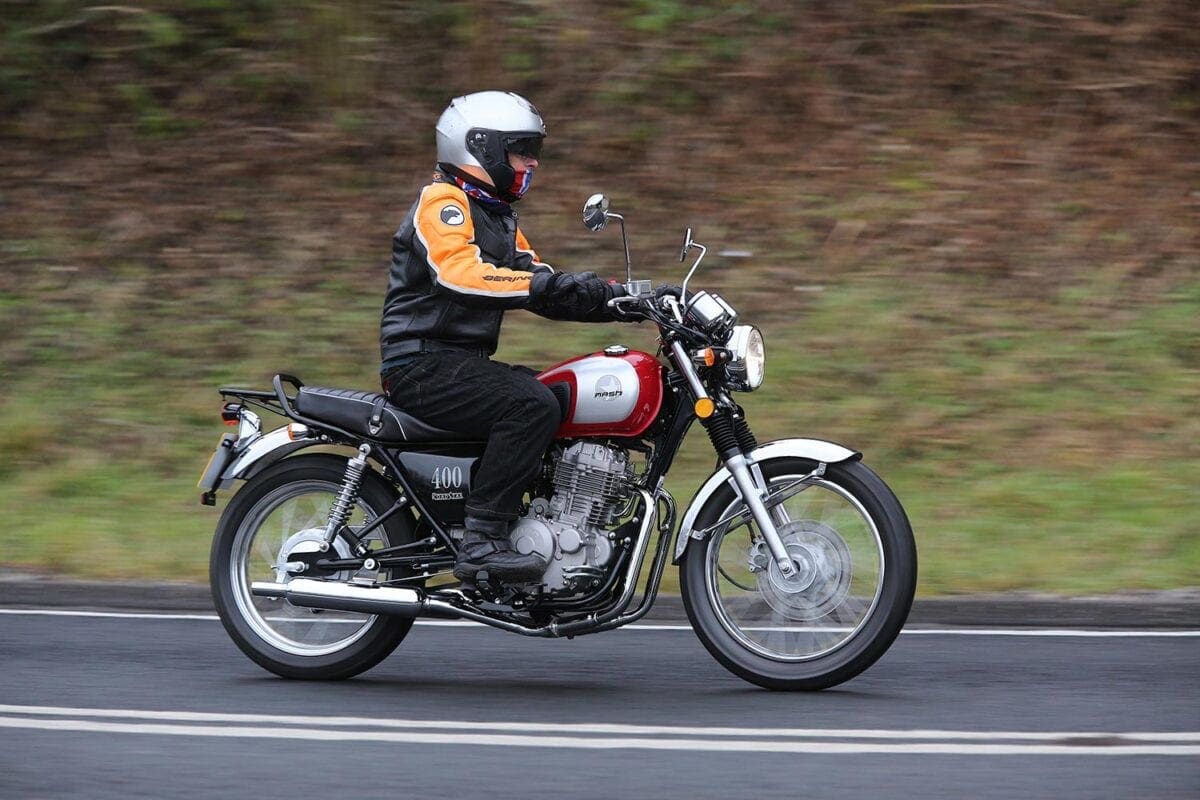 In two words; dead easy. The Roadstar is the sort of bike you just hop on and ride without a second thought – it feels more like a 250 than a 400 (claimed weight is less than the average 250cc scooter), and it’s well balanced into the bargain.

The paper power figure looks puny, but the bike’s secret weapon is that it offers a decent wodge of mid-range torque. The redline is at 10,000rpm, but that’s to be ignored, as an ignition cut-out interferes at 8500rpm and torque peaks way back at 5500.

This is good news, because it means you can leave the bike in fifth gear much of the time, and it’ll happily pull away from 40-50mph limits without needing a down change, or lollop across country on a twisty B road. None of this is very exciting, but it’s satisfying, not to mention stress-free. If you insist, the bike will rev round to that 8500rpm cut-out, with some vibes coming through from 6000rpm onwards, and flat out it’ll manage an indicated 85mph, if you can hang on against the wind blast.

More to the point is the relaxed 60-65mph cruise and the fact that handling is pretty good, in a relaxed sort of way. With its wide bars, the Roadstar is easy to tip into a corner, and although the forks seem soft at a standstill, they cope okay with bumpy B roads. Only the front brake disappoints by lacking power, though the importer tells us that a braided hose, soon to be added, should help matters.

Four-stroke singles have traditionally been easy on fuel, and this one is too, managing 69mpg over about 100 miles of A and B roads, including some dual carriageway. Keep off motorways, and forget trying to reach that redline, and you could be looking close to 200 miles from the 13-litre tank. 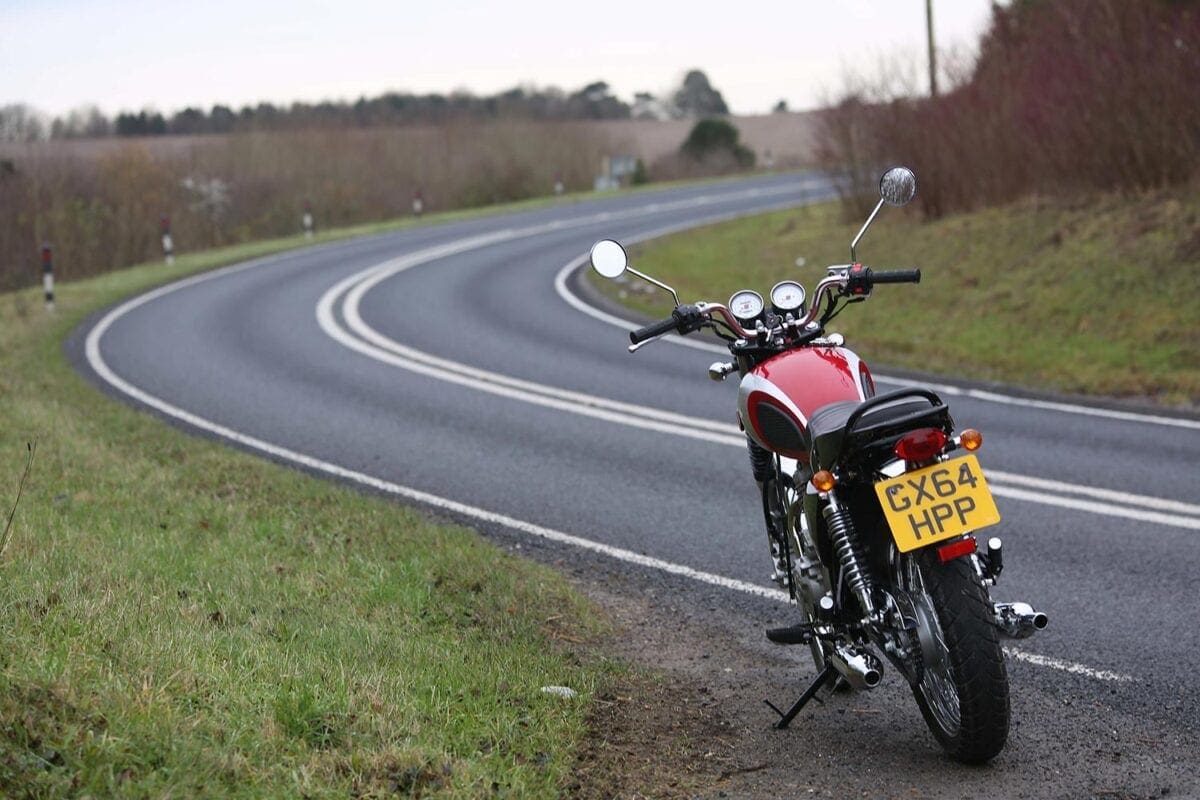 The bike is made in China, but Mash was dreamt up in France by Sima, once the French Ducati and Husqvarna importer and now seller of Gas Gas trials bikes and the Hyosung range.

“The name is taken from the MASH TV series of the 1970s,” says Richard Johnstone, boss of UK importer TGB Sport and Leisure. “The founders were all fans, and wanted something that suggested that era.”

The Mash brand was launched in France three years ago, offering Chinese-made 125s and 250s with a more retro look. And it’s succeeded, topping the French market in geared 125s. It’s a move we’re now seeing in the UK – the NEC show in November saw several stands with sexed up Chinese 125s, all aping that mini-Triumph Bonneville look.

UK importer TGB has been in business for 20 years, selling quads, but this is its first venture into two wheels. “We’ve got about 25 dealers so far,” says Richard Johnstone, “and we’re aiming for a network of 40. There is already a complete spares back-up for the Mash and it has a two-year warranty.”

The Roadstar is just the first Mash we’ll see – a flat-track style Trackstar and street-scrambler Dirtstar are on the way, both based on the same chassis and mechanical bits.