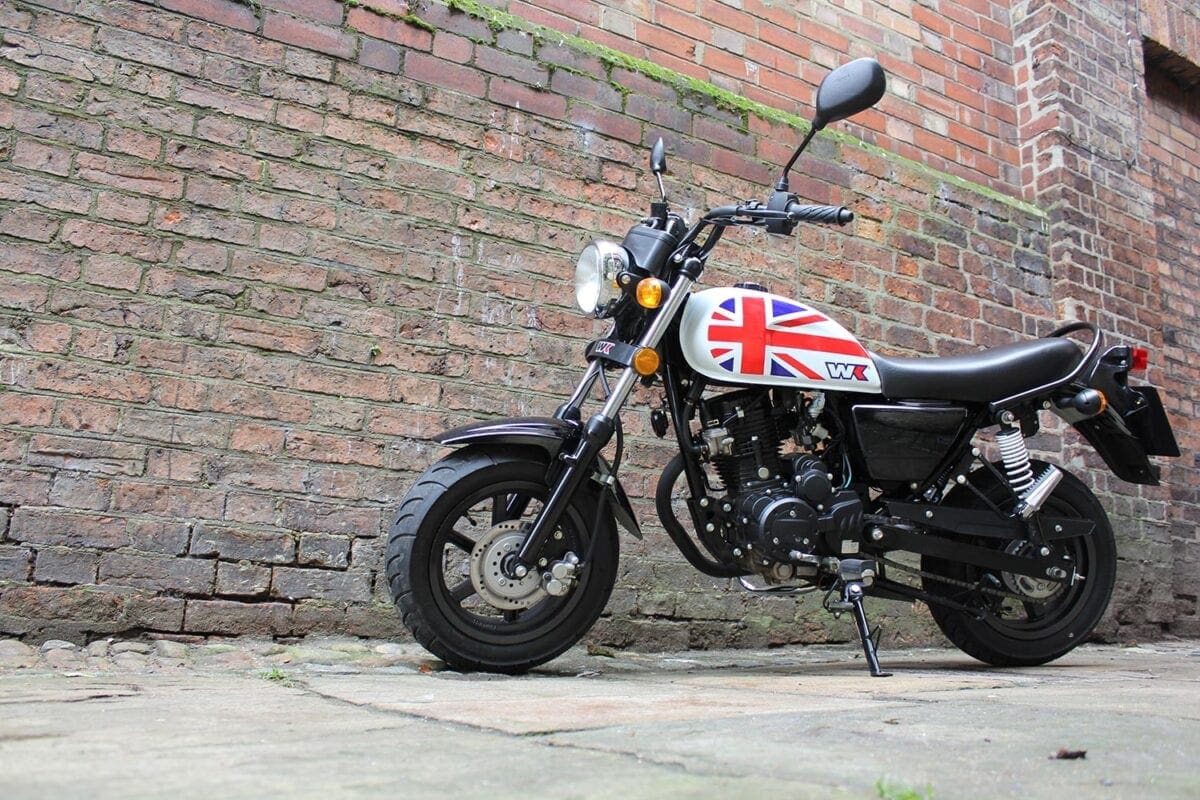 WK Bikes has launched a commuter machine to join its already strong line-up – a brand-new machine with looks inspired by the iconic Suzuki VanVan. 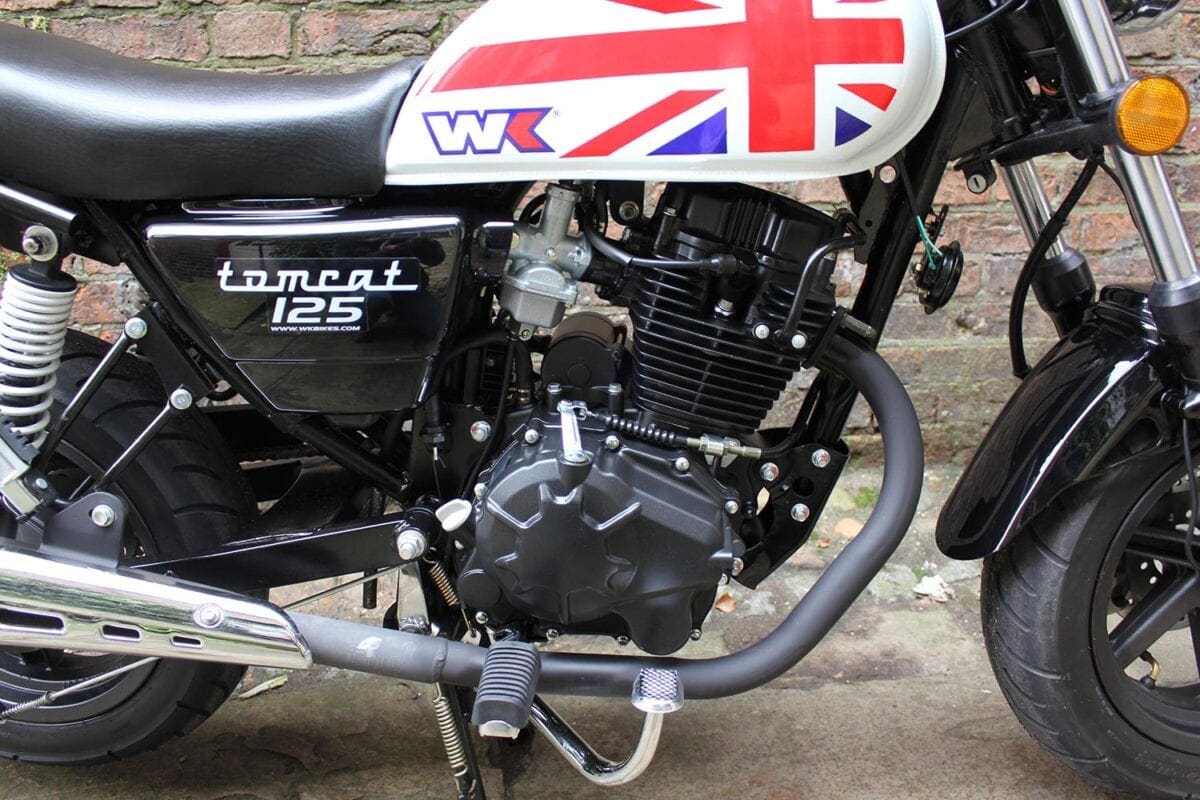 The TomCat is powered by an air-cooled, four-stroke 124cc engine with an output of 10bhp.

Acceleration is what you’d expect from such an engine, and I managed a top speed of 57mph. To be fair, it was a new bike with not many miles on the clock, so it may loosen up to hit the magical 60mph. 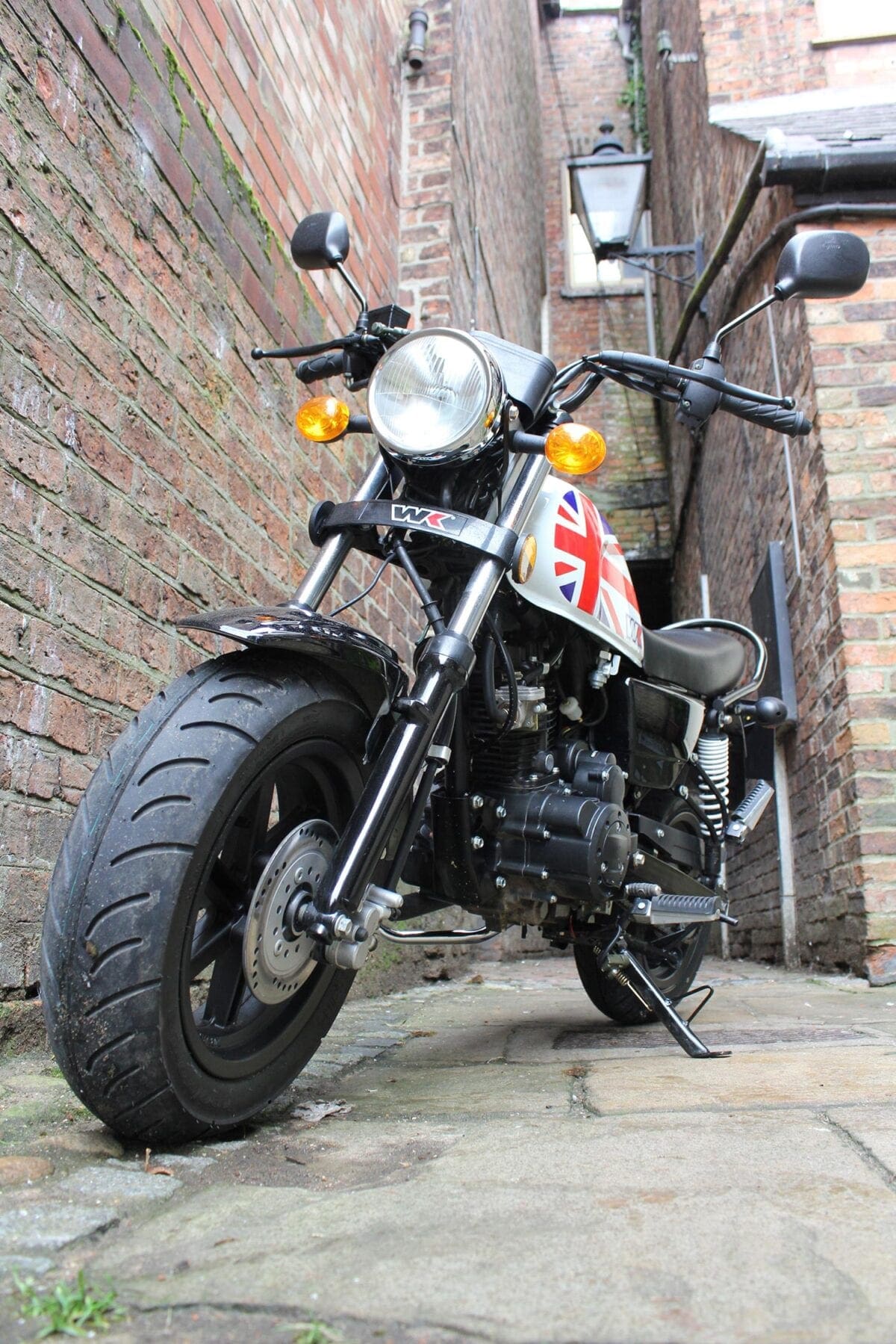 You won’t need to worry about being able to get your feet down on the TomCat. With a seat height of just 680mm, it’s suitable even for those of us with smaller legs. At 5’6” I was comfortable, but if you’re 6ft or over then it might not be the right bike for you, at least over longer distances.

There’s a disc brake on the front and a rear drum brake – independently neither of them are particularly strong, however when used together they’re effective enough to bring the miniature machine to a halt. Pillions are catered for with footpegs and a rear grab rail. 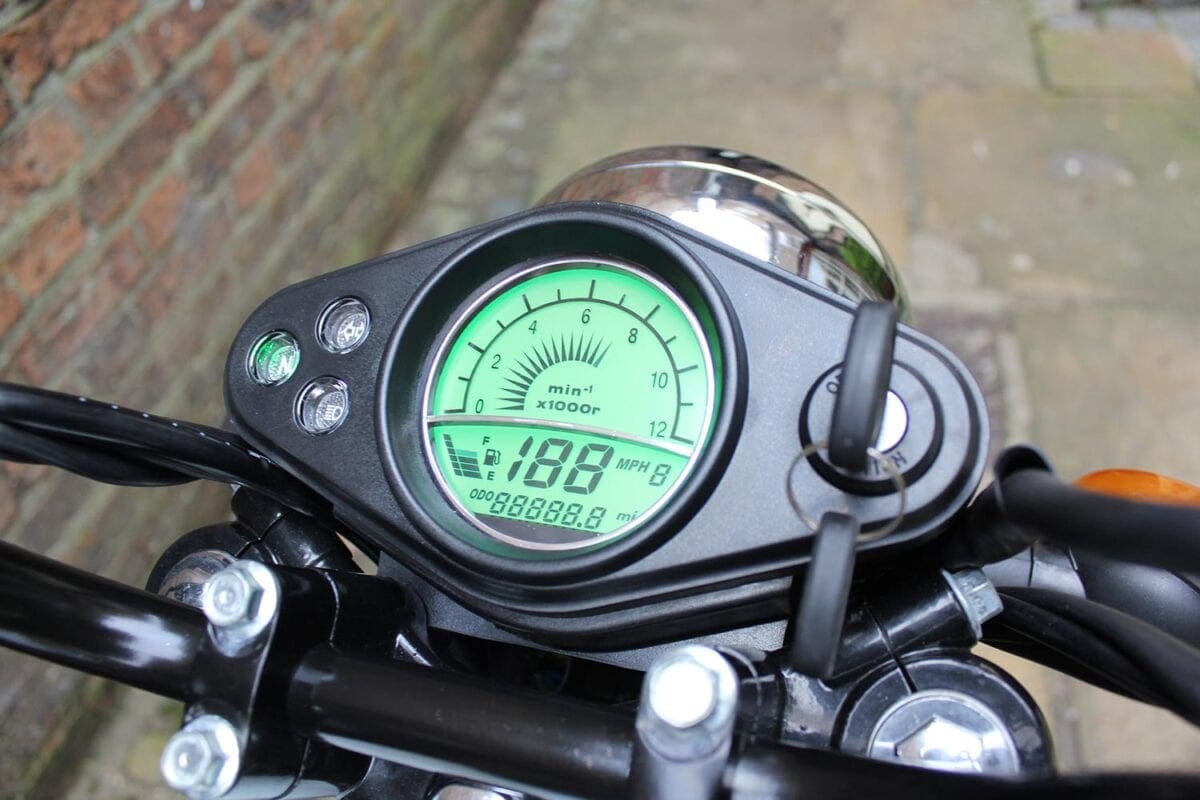 What the TomCat offers for £1199 is unbelievable. If you’re after a run-around, a bike to play on or a commuter then this is worth a look, and is considerably cheaper than many alternatives – London workers might find this costs less than a year’s travel or even parking!

A number of flags are available as the tank design, or you can choose a plain white one and perhaps personalise it yourself. It certainly looks cool. We were asked twice if it was for sale while we were photographing it; there was even a cash offer… 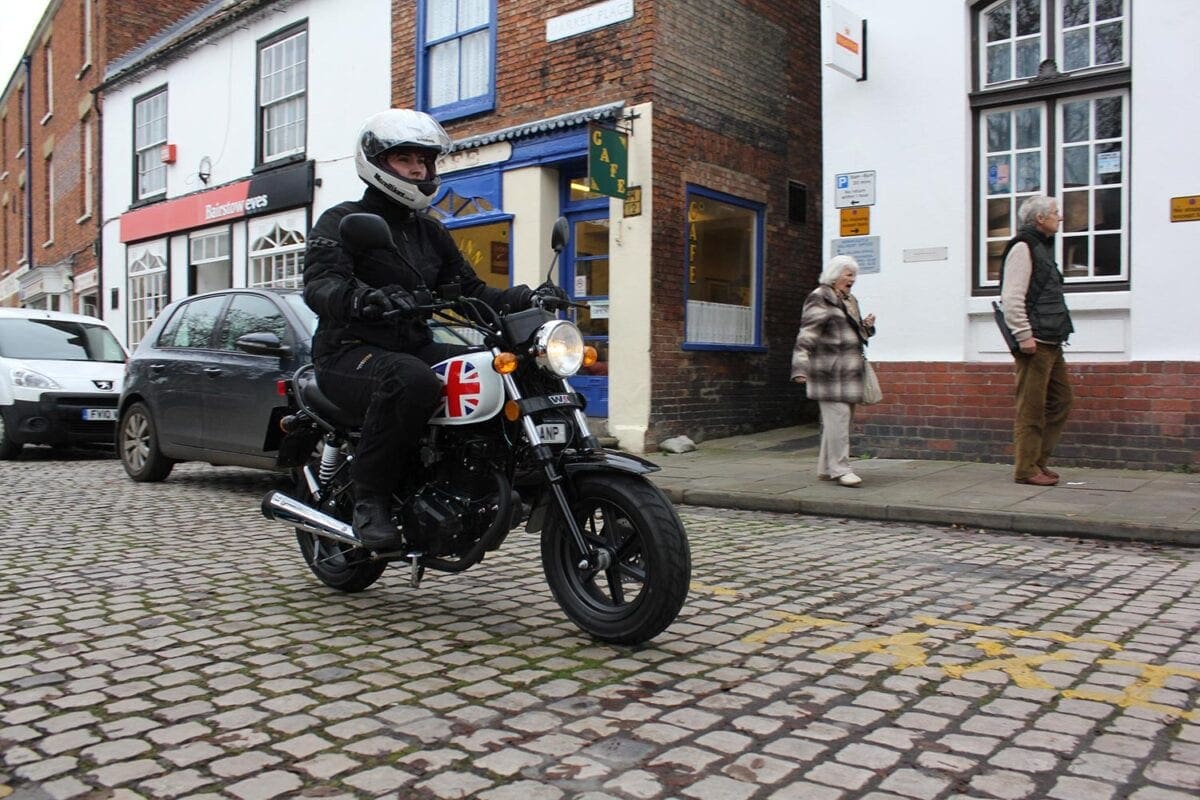 Over 40mph, the vibrations are strong from the single cylinder motor, so if you’re after a smooth and plush ride, then look elsewhere (and expect to spend more). However that’s not what this bike is about, and is actually part of its appeal for me. I’d say it was a great choice for nipping around towns and cities.

It’s small and agile, and a doddle to park thanks of its miniscule form. It’s very rare that I feel like a giant on scooters or any other bikes, but I did on the TomCat. Despite its small size though, it still felt sturdy and secure.

Because of its low seat height and centre of gravity, when cornering it can seem slightly strange if you’re used to riding bigger machines or scooters, as you feel conscious that you don’t want your body weight to tip over. Plus at just 120kg – that’s around 19 stone – it doesn’t take much to throw it off balance.

There’s no steering lock – and with a bike as good looking as this, I’d definitely take a disc lock or put a chain and padlock through the wheels when you’re out and about. The fuel cap is lockable and holds 6.5 litres.

It’s a cool looking, fun-to-ride two-wheeler, and could at the very least be a great way to save money whilst commuting. 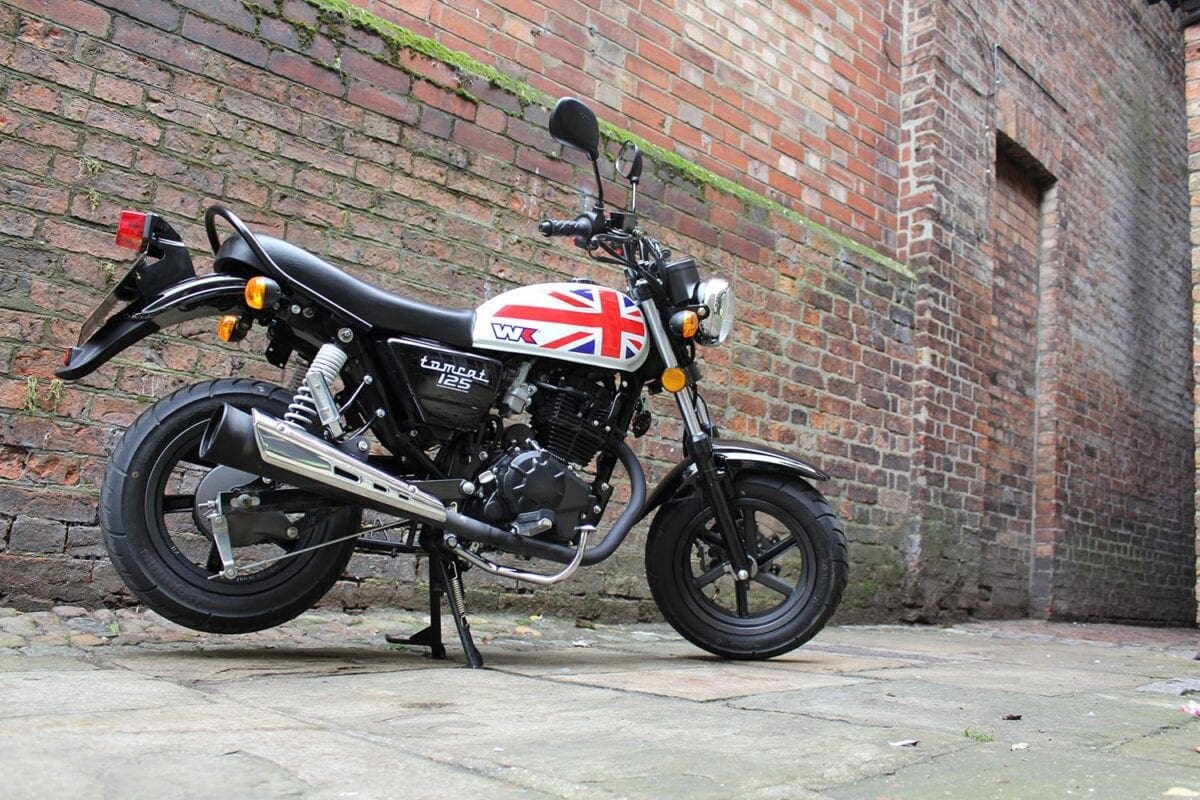