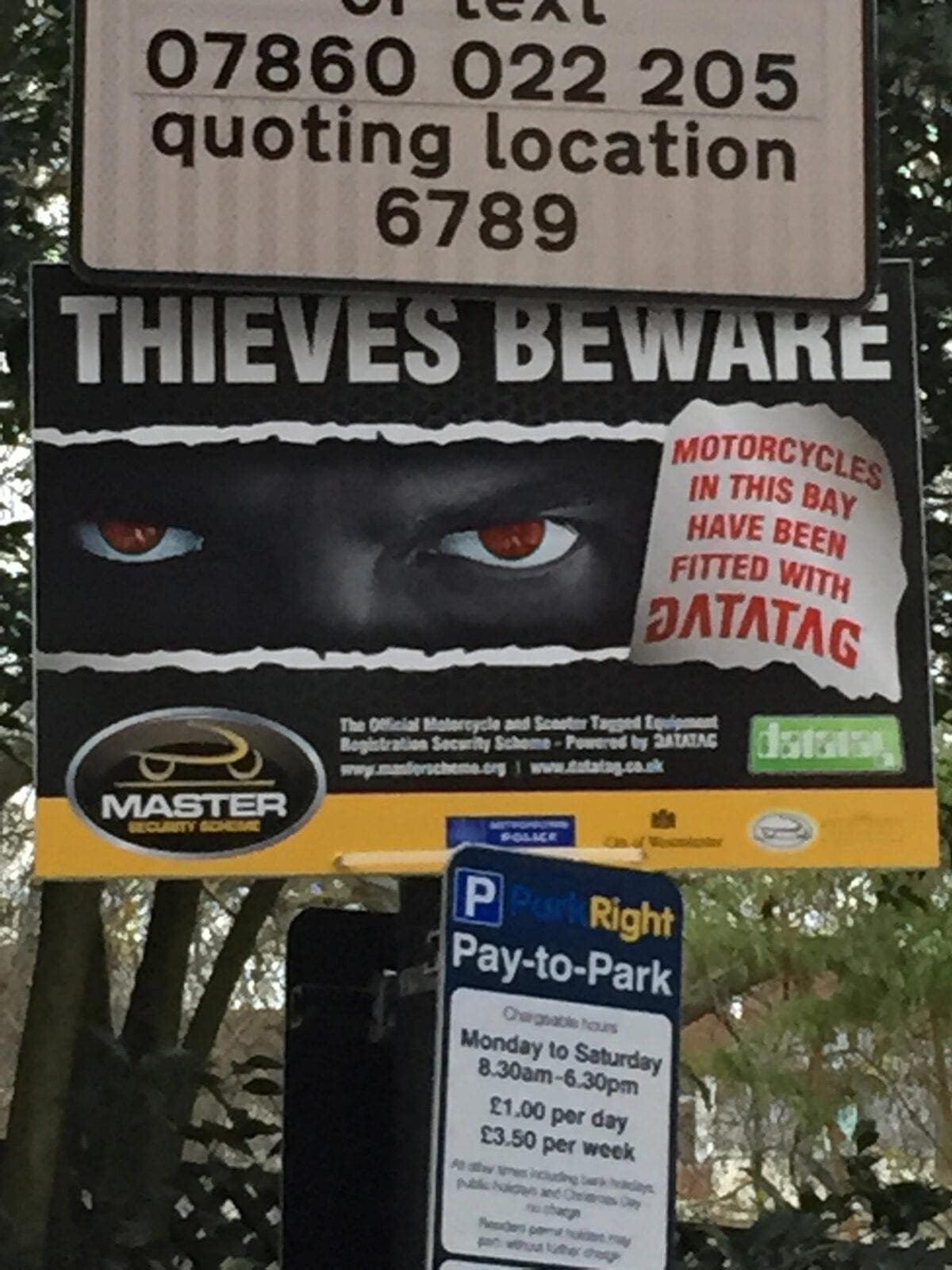 Motorcycle thieves are now avoiding St James’s Square in London, thanks to a series of anti-theft initiatives.

The Square was identified as one of four ‘hotspots’ for motorcycle theft by Westminster City Council, with around 52 motorcycles or scooters stolen each year from its parking bays –  around one a week.

£1 million worth of motorcycles, scooters and mopeds have been stolen from the whole of the City of Westminster since April 2014 – a total of 191.

Since September though, none have been taken from St James’s Square, as a result of a series of measures put in place by Westminster City Council through working in partnership with the Metropolitan Police and security marking specialists Datatag.  This could be rolled out to other ‘hotspots’.

Westminster City Council and Datatag advertised a day in September to offer riders the chance to get their motorcycles security ‘tagged’ on site for just £50, including fitting. This resulted in a steady queue of riders taking advantage of the offer.

Tagging involves applying a combination of highly visible and hidden security markers, which deter thieves but also help the police recover vehicles if they are stolen. Fitting takes around 25 minutes to complete.

The Metropolitan Police were also on hand to check the Police National Computer to make sure the bikes weren’t stolen in the first place. After the tagging took place, warning signs were put up to let thieves know that users of the parking bay had security marked their bikes.

Community Protection Officer for Westminster City Council Paul King, who has led on this project explained:

“We are determined to reduce motorcycle theft in the City of Westminster and to give parking customers the best possible experience, which includes coming back to find your bike where you parked it. We have applied a combination of measures in partnership with the Metropolitan Police and Datatag, which alerts riders as to the risk and gives them the means to avoid them.

“We aim to repeat the opportunity for riders to have their motorcycles and scooters marked in the New Year for riders who use Berkeley Square parking, as we feel this provided a turning point in St James’s Square, which we would like to repeat for other theft ‘hotspots’ in the City.

“We would also urge any rider who parks near an anchor point to make sure they use it. All these measures clearly work, but only if riders stay vigilant.”

“We are delighted to hear the part security marking is playing in eliminating theft in St James’s Square and applaud Westminster City Council’s systematic approach in dealing with it and would like to see other London councils making such an effort.

“The underlying message gained from this exercise is that thieves like easy pickings.  Make it as hard as possible for them to steal in the first place and if they do, make sure your bike is marked.  This makes it easy for the police to secure a prosecution when they find a stolen motorcycle or scooter and helps them return it to its rightful owner.

“Riders who don’t want the inconvenience of having a motorcycle or scooter stolen have a number of options.  They now have a huge choice of new bikes which are automatically MASTER tagged, and they can have older bikes security marked retrospectively.  We feel this is clearly acting as a huge deterrent to thieves, who are switching their attention to unmarked bikes. Thieves are looking for easy pickings, so make sure your bike doesn’t fall into that category.

“Over 70,000 new bikes have been marked since we introduced the MASTER scheme, which makes these bikes far less likely to be stolen.  It makes sense to make sure your motorcycle is tagged, either by buying a new model, which fits this as standard, or by retro fitting it.”

Westminster City Council has since added 78 ground anchors to the parking bay, which offer an additional highly visible deterrent. When riders secure their bikes to anchor points it makes it difficult for thieves to just lift up a scooter or motorcycle and put it into a van – a common way for thieves to steal an unsecured bike.

Over the past few years an average of  24,000 motorcycles have been stolen annually in the UK, half of which are taken from London streets, with motorcycle theft in Westminster accounting for 55% of all vehicles stolen.

This is becoming much less of a problem for newer bikes, as most major manufacturers have signed up to the MASTER scheme, which means bikes are tagged from the beginning.

The MASTER scheme was developed two years ago with Home Office backing, in conjunction with the Metropolitan Police force and with support from the Association of Chief Police Officers.

Over 70,000 new motorcycles and scooters have now been protected and registered with the MASTER Security Scheme since January 2013.

First year figures for the scheme show that between January 2013 and January 2014 only 185 MASTER tagged motorcycles were stolen across the whole UK.

31,000 new motorcycles were protected by MASTER Scheme during this period, which represents a theft rate of 0.6%, compared to an historic rate of 2.4%.

Unfortunately the problem is shifting to unmarked bikes. Motorcycles or scooters which are unprotected by security marking or any visible means of security are now far more likely to be stolen than those which are protected.

• ‘MASTER’ stands for Motorcycle and Scooter Tagged Equipment Register and was launched in 2012. Participating manufacturers include BMW, Ducati, Honda, Kawasaki, KTM, Suzuki, Triumph, Yamaha and Harley-Davidson. It was developed by the Motorcycle Industry Association with Home Office backing in conjunction with the Metropolitan Police force in response to the considerable nuisance that motorcycle theft caused to motorcyclists, the police, insurers and the industry. It is powered by Datagtechnology.

• Many motorcycles are broken up into parts within hours of being stolen and reassembled onto legal frames, which have log books.  This can net thieves thousands of pounds a day.

• 80% of these ‘clones’ find their way into the legitimate dealer network, therefore before the MASTER Scheme it was virtually impossible for dealers or the police to identify stolen parts.

• For those innocent people who unwittingly buy stolen vehicles and have their bikes seized by the police, 90% do not continue with motorcycling.

• 43% of all insurance pay outs are due to theft (according to MCIA research).

Facts and figures supplied by the Motorcycle Crime Reduction Group 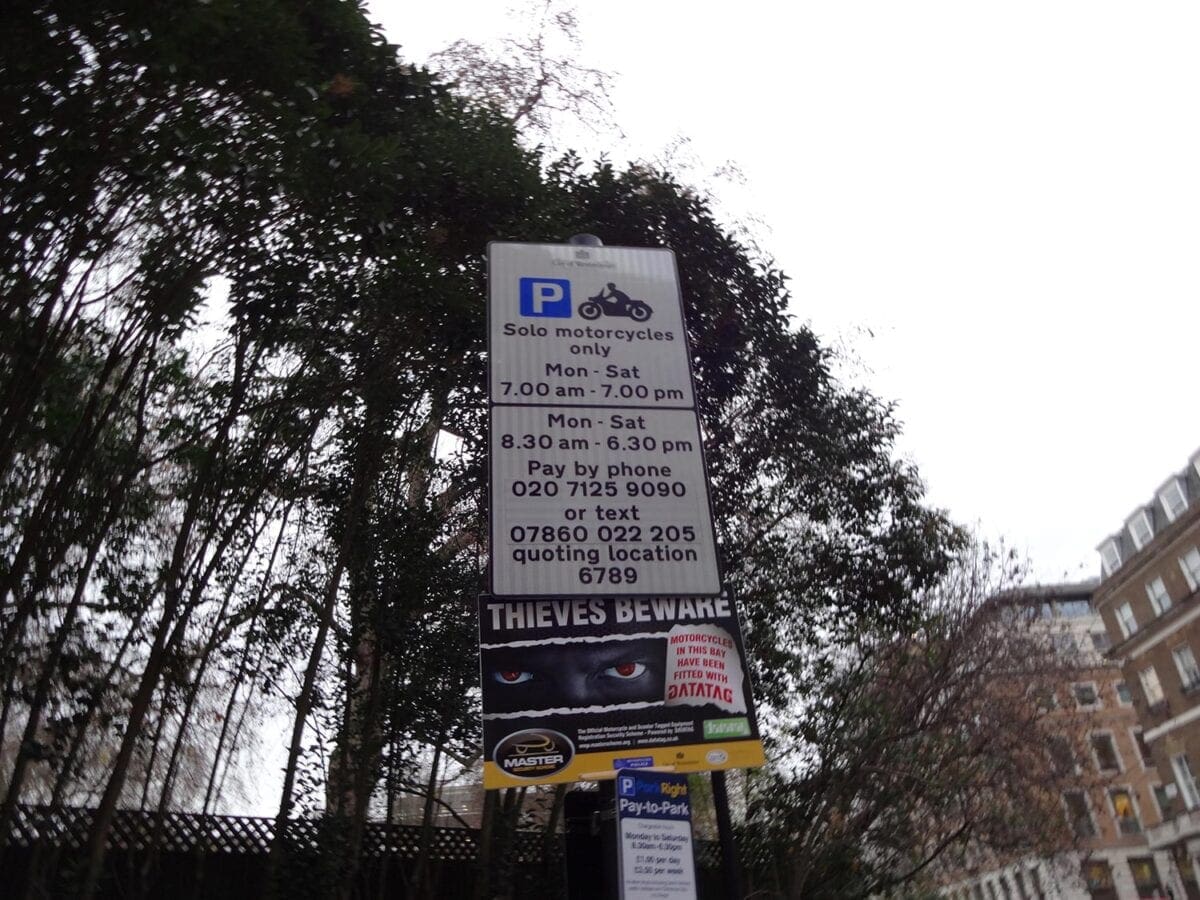