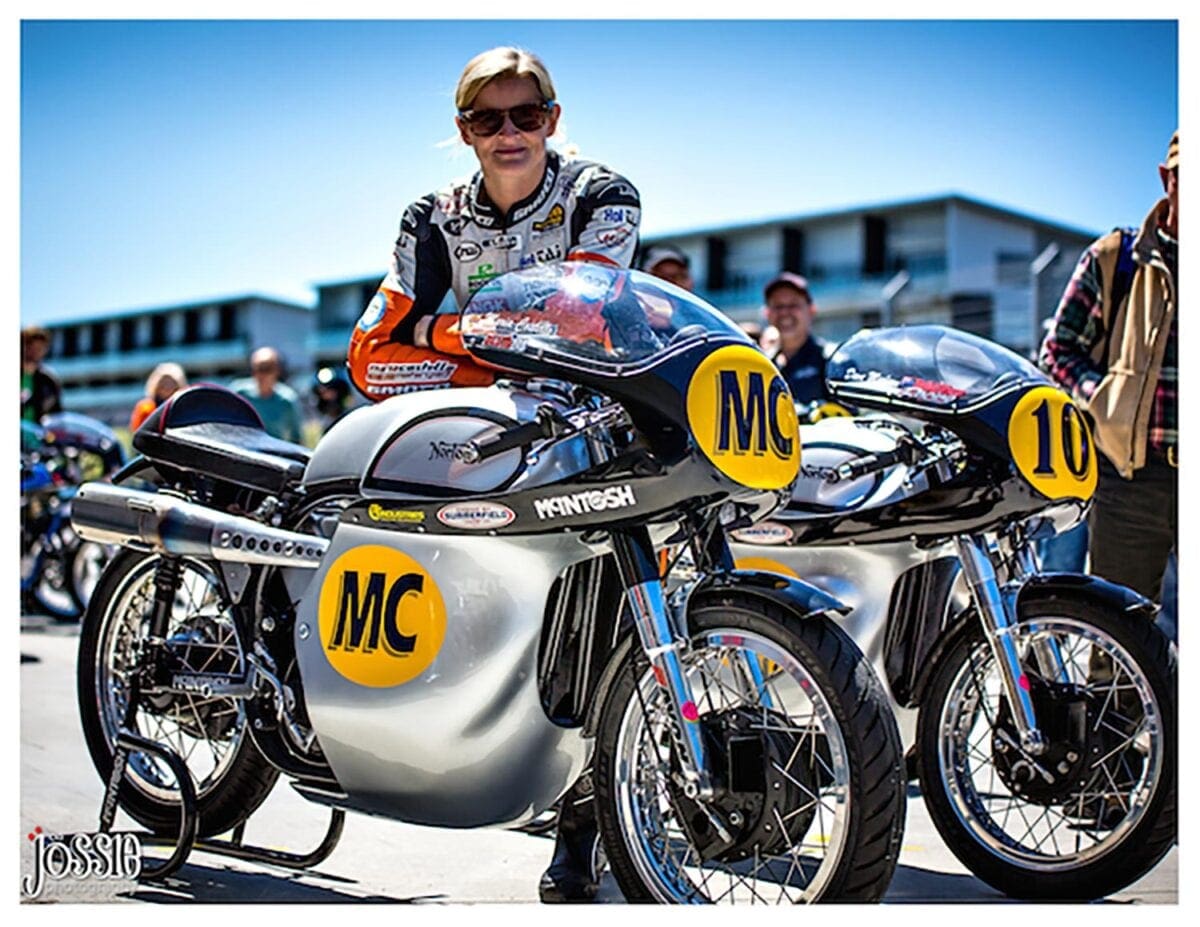 Maria Costello MBE has returned from New Zealand to concentrate on her new season after taking a brace of top six finishes in the Classic Solos class at the Wanganui Cemetery Circuit in New Zealand.

Costello had been invited to participate in the three-event 2014 Suzuki Series, held on two short circuits and one street race throughout December, following a successful racing debut in New Zealand earlier in 2014.

Sidecar racers Tracey and Steve Bryan, a husband and wife team, organised a KTM 690, provided by Boyd Motorcycles of Hamilton, for the Northamptonshire racer to use at all three rounds. In addition, Costello was also back onboard the TT Industries McIntosh Manx Norton owned by Bruce Verdon for the final leg, a machine she had raced at the Barry Sheene Classic event in the autumn.

The first event of the Tri Series took place at the smooth and flowing 2.8km Hampton Downs circuit, and Costello, with previous circuit knowledge, hit the ground running on the 690cc KTM with a qualifying lap of 128km/hour in the BEARS class, a mixed field in which the 1000cc bikes filled the top places on the grid and timesheets.

Race one was just as successful with Costello securing a hard fought ninth place overall, lapping at an impressive 131km/hour. She went one better next time out, getting more used to the KTM’s riding style, to take eighth in race two.

The F3 category at Hampton Downs was hotly contested. Costello found herself outclassed on the KTM but took it as a chance to get more laps under her belt and claimed 15th and 16th place finishes.

“I’ve never raced anything like the KTM before and the high bars took some getting used to. We adjusted them and Seth [another racer] gave me a Pro-grip to go on the throttle to reduce the arm pump I was getting from having my arms in a different position. Hampton Downs has a bit of everything, blind corners, tight corner and fast sweepers. The 690 is a little under powered but I ended up having an absolute ball on it!”

The middle leg of the Tri Series took place at the Manfeild Autocourse, a purpose-built 3.033km track near Feilding that has hosted all manner of motorsport events, including Formula 5000 cars in the early 1970s.

Costello, complete with a touch of the flu, headed out for BEARS qualifying on the KTM but was plagued by front suspension issues. Her 11th place grid position was a great achievement in the circumstances, but further changes to the front suspension ahead of the F3 qualifying session gave her more problems and she had to return to her pit crew twice before being able to put in any qualifying laps.

As the BEARS race got underway, Costello made the most of her third-row grid slot, clinging to the front pack of big bikes for the first couple of laps. Eventually, the relative lack of power saw her battling it out with Stuart Swan on a 675 Triumph and Gavin McKay, with Costello edging him out on the run to the line to earn a fine 10th place.

Under the weather, Costello opted out of the F3 races to concentrate on the remaining BEARS race. Once more, Swan headed this tightly fought pack home, with Costello having to wait for the final moments of the drag to the line to pip McKay for eighth overall.

Costello’s absence from the F3 races did not prevent the female participants from holding their own. Avalon Biddle picked up both F3 race wins in impressive style to grab the trophy for the ladies.

A fortnight later, on a bright and sunny Boxing Day, the Suzuki Series contingent headed to the Cemetery circuit – a tight, mile-long street circuit in downtown Wanganui that runs around a cemetery. The crowds arrived in their thousands to watch a strong international field of riders which included Costello, her countrymen Guy Martin and Billy Redmayne and TT compatriot Horst Saiger of Liechenstein. 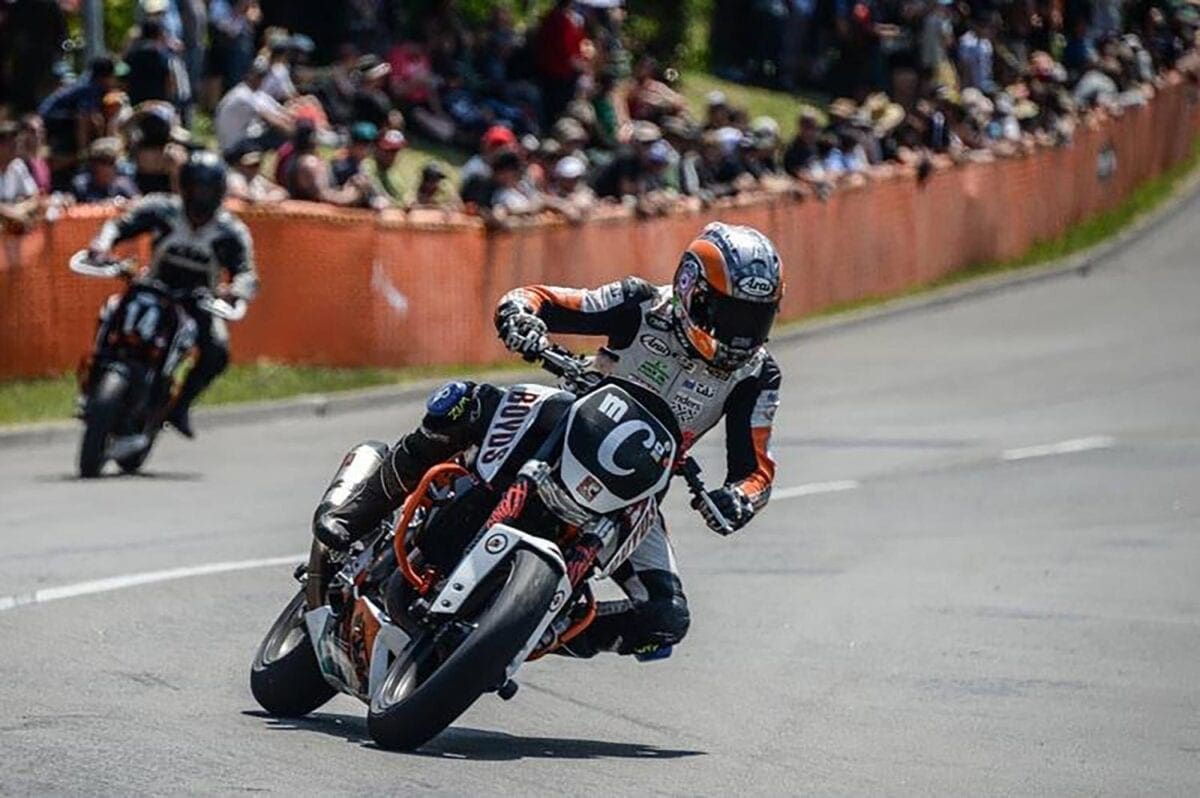 Costello had a busy schedule ahead racing two machines in the BEARS, Solo Classics and F3 classes. The day started with a 5.30am alarm call to be ready for the newcomers laps on the Boyd’s of Hamilton KTM which headed out on to the streets of Wanganui at 7.30am. With her new rear Bridgestone tyre scrubbed in she had two practice sessions and two qualifying sessions on the KTM and a practice and qualifying session on the Manx Norton.

Costello, no stranger to racing on public roads, took to the Wanganui track with relative ease. 12th and 13th placed finishes in the BEARS class were followed by an 18th place finish in the first F3 category race, but it was the two sixth placed finishes in the Solo Classics races (both won by Guy Martin) that brought the biggest grin to her face.

As racing drew to a close, Costello reflected on her latest New Zealand experience: “I’ve loved my first taste of NZ street racing and all this extra circuit and road race time is great prep for 2015!”

“I feel very honoured and grateful for the opportunity to race out here once more. I really hope I get an invite back next year? Now it’s all about my 2015 season ahead and I’m looking for new sponsors and partners to come onboard. If you are interested in becoming a sponsor please email maria@costelloracing.com“