Whatever your experience, skill or confidence, BikeSafe is a fantastic way to brush up on your riding skills. Staff Writer Carli Ann Smith went out with the Cambridgeshire traffic cops, and she’s sharper than ever!

I was being followed closely as I weaved my KTM 390 Duke around the Cambridgeshire countryside; my mirrors filled by a Policeman on a BMW R1200RT, watching my every move. He pointed for me to pull over. Before I could nervously remove my lid, he was off his bike and by my side saying: “What a cracking ride”. I’d just completed my BikeSafe riding assessment.

Non-biking friends and family will gladly tell you that statistics say bikes are dangerous. Well here’s a stat for you: 63% of UK bike crashes involve just one vehicle: the motorcycle. 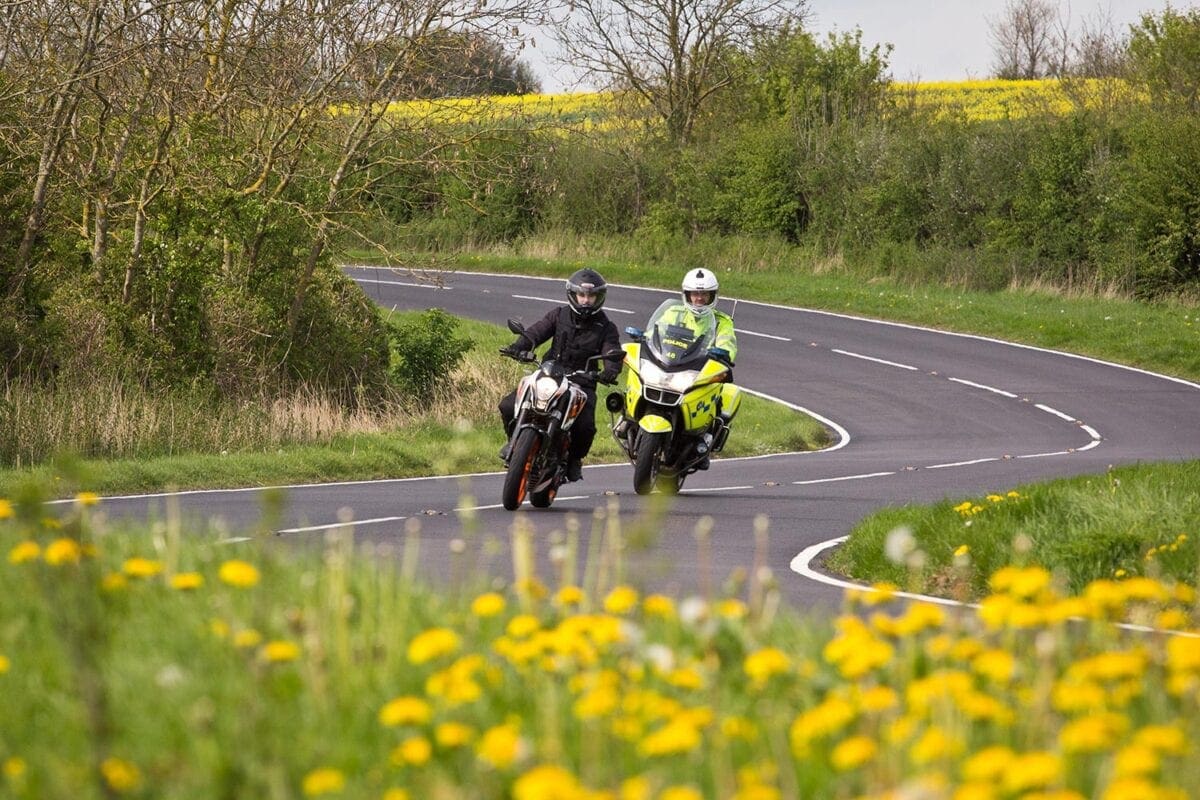 As bikers, it’s all too easy to blame the dozy car drivers: the idiots on their phones, or the easily distracted in their protective metal cages. If they do make a mistake, we’ll be the ones who come off worse, so yes, we have to think for them, but the vast majority of incidents could be avoided, leaving the responsibility for our safety squarely in our laps. A huge proportion of those accidents also happen close to the rider’s home – when danger is least expected.

BikeSafe is a Police-led project run throughout the UK, with the aim of reducing the number of us bikers being hurt on the roads, and to encourage us into additional advanced motorcycle training. Through a classroom-based presentation and an observed ride, bikers are shown advanced techniques, and given brilliant advice on how to improve their road riding. How they can stay safe. 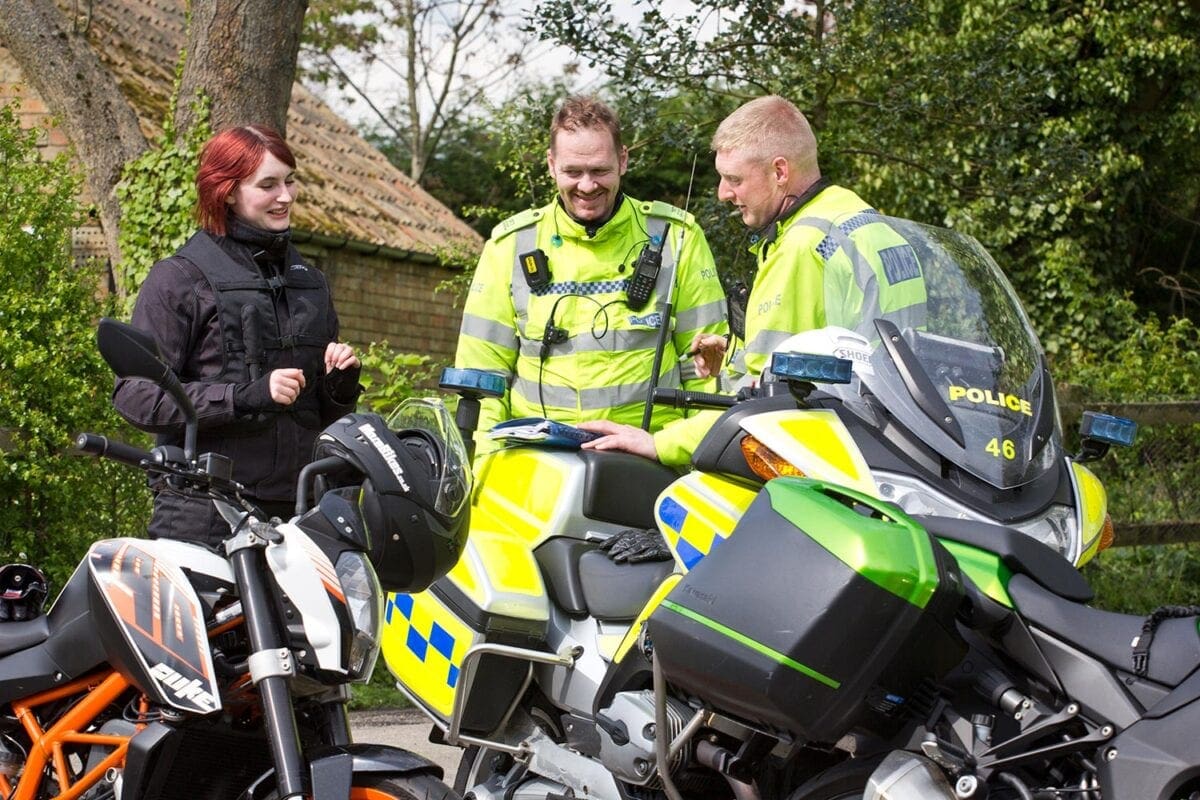 Training wherever you are

The course follows a national syllabus, so no matter where you are in the country, you’ll learn the same (the format in which it’s delivered and the cost may differ slightly, but expect to pay between £40 and £60).

I went along to a session run by Cambridgeshire Police, led by PC Simon Burgin. Our 22-strong group, made up of sportsbike riders, tourers and a Harley clan of all ages completed a day in the classroom, watching videos and bantering with each other. This really isn’t about sitting quietly while the cops tell you what to do – everybody laughed and joked together, and even the most experienced riders (many come back every year for a refresher course) learned something from the day. Clutching goody-bags full of Highway codes, Police Rider’s Handbooks, key rings, neck warmers, emergency kits and more, there was a real buzz as we prepared to leave in the afternoon, everyone looking forward to the practical side of the course. 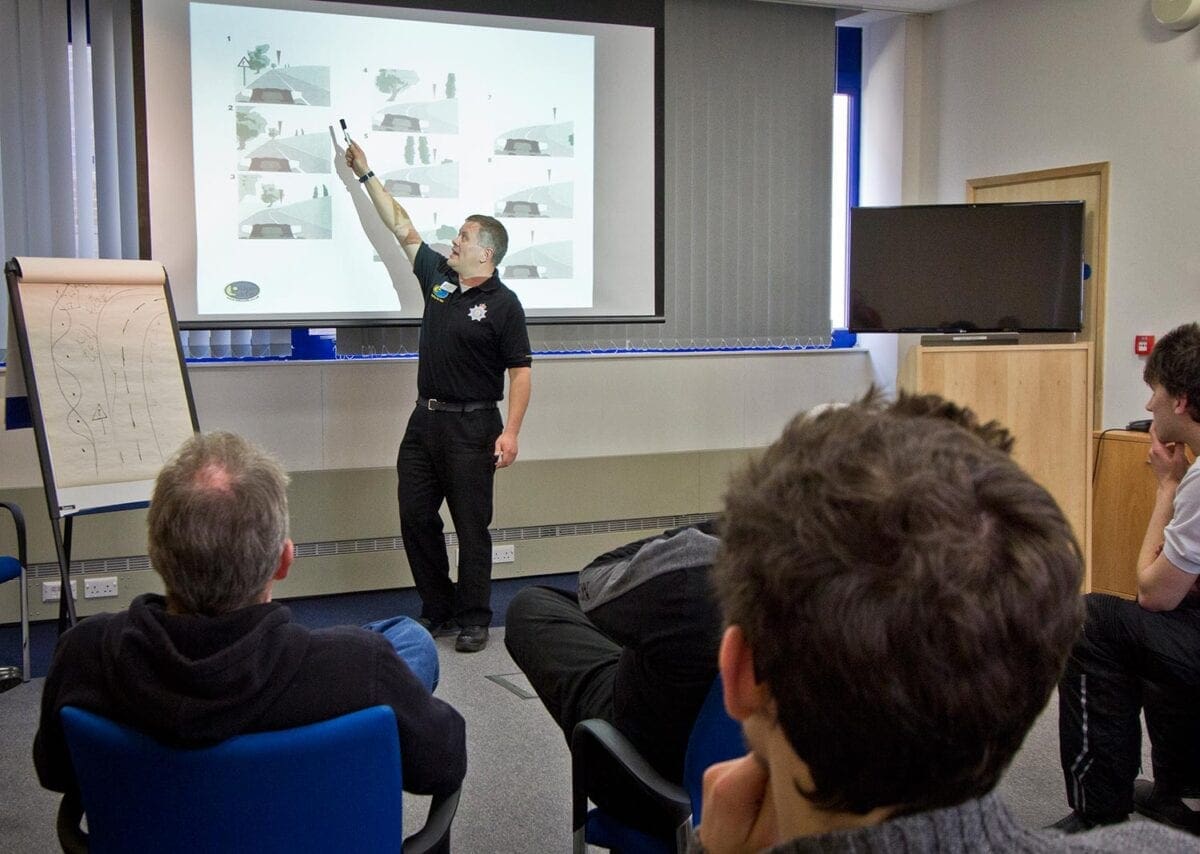 Two weeks later I was back at the Huntingdon Police Headquarters. Nationally, there’s a 2-to-1 rule, so there will never be more than two riders out with one trained Police assessor. The guys at Cambridgeshire work on a 1-to-1 ratio so I had nowhere to hide. “Just ride like you would if I wasn’t here and most of all, enjoy it” said PC Dave Osbourn, my assessor for the afternoon.

Despite having ridden bikes for over ten years, I was still nervous. An hour is a long time when you’re being followed by a fully-marked Police bike. But, even after managing to make a wrong turn as I left the car park, the butterflies soon disappeared, and I just pretended Dave was a mate who I was heading out to the coast with. The route allowed me to show how I rode on dual carriageways, motorways, country roads and through quiet villages. The dominating presence of the BMW that had made me nervous at the beginning now gave me a feeling of ease and slight rebelliousness. I did keep giggling in my helmet that I was being followed by a Policeman and, more importantly, I was having a brilliant time doing it! 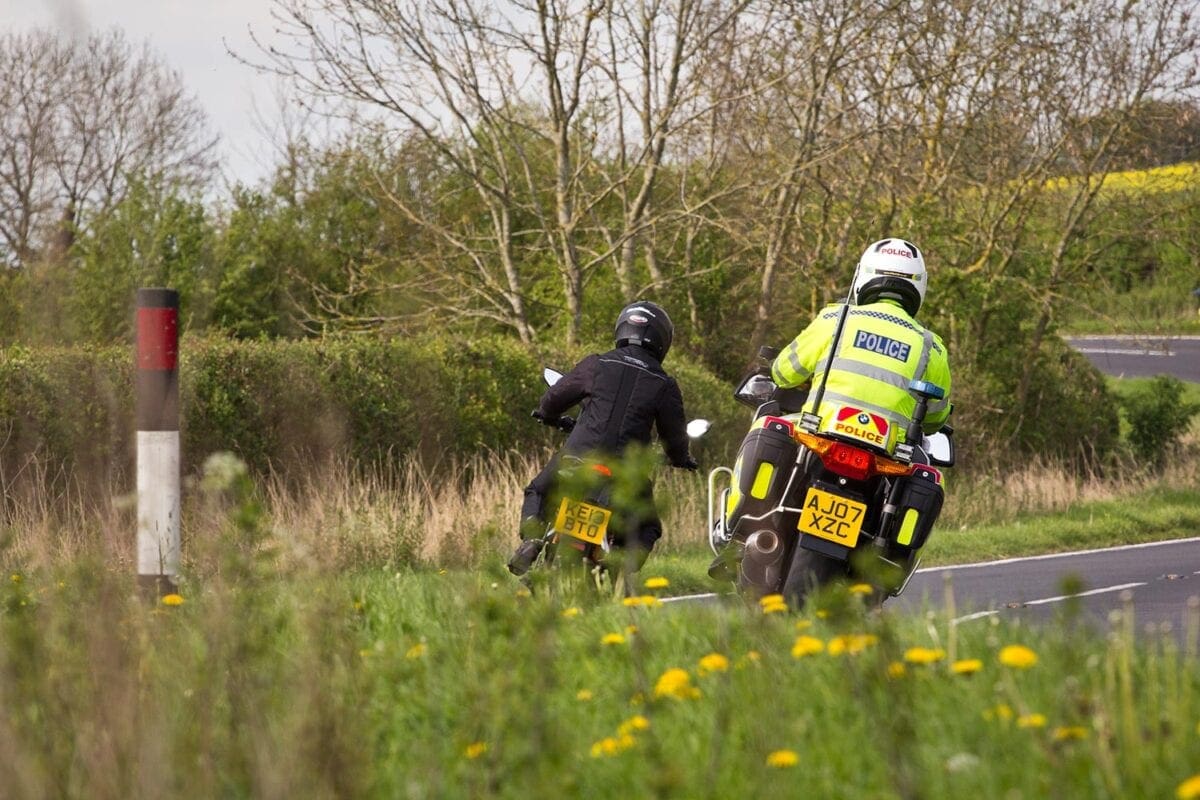 The biggest thing I learned during the class session, and by reading the Highway Code, was the importance of road positioning. It makes a huge difference in terms of visibility – both of the road ahead, and of you by other road users – which will help you stay out of danger. Having worked with race teams, I know about apexing bends: many bikers do it on their Sunday ride outs, myself included until the course, but on the road it’s all about taking it wide and opening up the view. Try it, and you’ll be amazed at how much more progressive you are! Check out our video of the Police riding style by searching for ‘truth about traffic cops’ at www.MoreBikes.co.uk.

Around two thirds of the way into the ride, Dave overtook me so I could follow him, and watch his lines. The way he commanded the 270kg+ machine looked effortless, and the level of skill he exhibited was awe-inspiring. He used the full width of the road for visibility, and knew just when to get on the power. When overtaking, there’s no hesitation – if it’s clear and safe, the Police riders “Lock it, load it and fire.”

Pulled over in a small village – curtains twitching as the locals thought I was being knicked – I was given constructive feedback of every bend, roundabout and overtake: Nothing was missed, and everything was noted and discussed with pointers given on how to improve, but I’d passed with flying colours (and with a better score than editor John too, who’d come along to take photos, even if I do say so myself).

“A lot of people change their minds about the Police when they’ve spent time with us doing BikeSafe”, said PC Simon Burgin as he handed me my certificate. “They realise that we’re bikers just like them, and enjoy a good ride out too. The attitude of the people on the course means that they’re all in the right mind-set to learn more, and we’ve never had to tell anyone to get a taxi home. We’ve taught people who’ve just passed their test aged 17, right up to a gentleman who was 76.

“The aim is to educate the motorcyclists on the road, and encourage them to think ahead: anticipating others’ mistakes and leaving room for them. We want them to be proactive riders, armed with the right skills to stay safe.”

I’m already researching what I can do next – whether that be with the IAM (Institute of Advanced Motorists, RoSPA (Royal Society for Prevention of Accidents) or the E.R.S (Enhanced Rider Scheme) – I’ve got the advanced riding bug now. Give it a go… blatting down twisty roads being chased by the law has never been so much fun!

For more information or to find your local BikeSafe course visit the website: www.bikesafe.co.uk 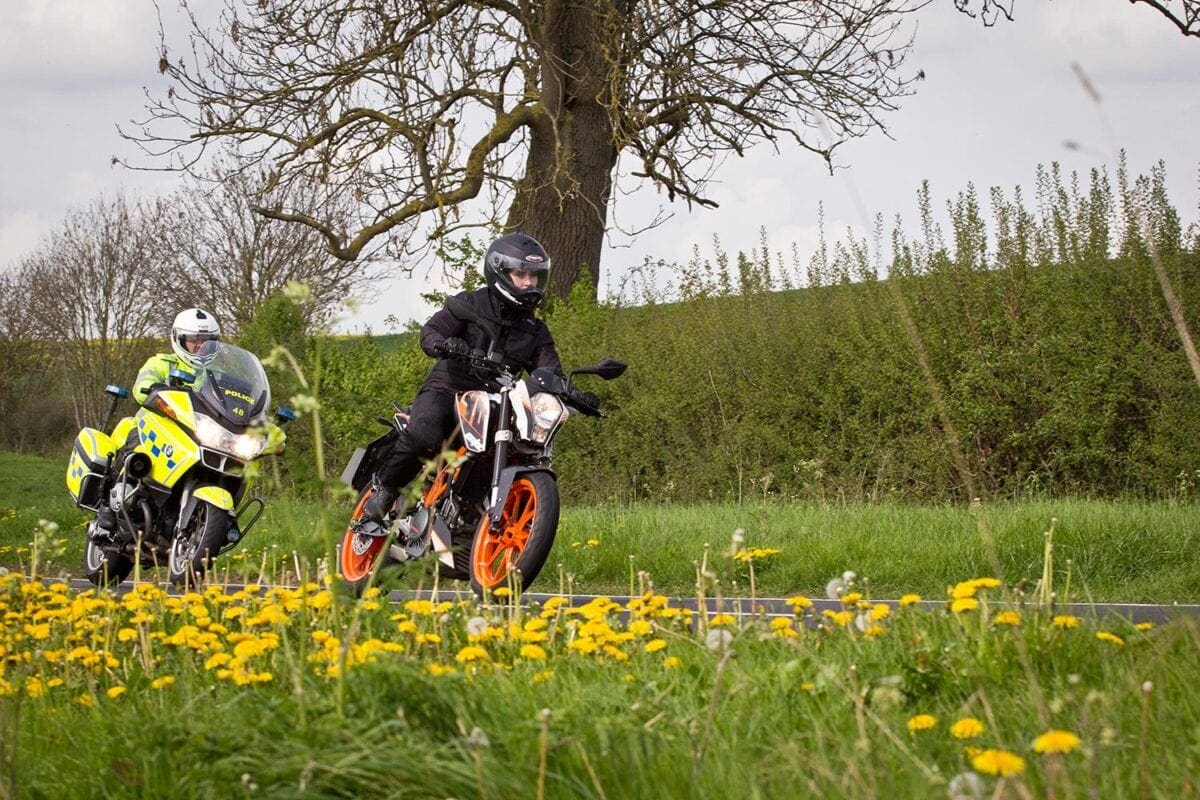 A few common misconceptions about BikeSafe. And why they’re all wrong.

I don’t want to give up my time on a weekend to be shouted at by a policeman – it’ll be boring.

You’re not going to get shouted at. Riding bikes is meant to be fun, and BikeSafe gets that across. You go for a ride with a Policeman behind you who isn’t going to give you a ticket, but instead a certificate to say what a great rider you are – how is that not cool? The cops give up their own time to deliver the courses, and aren’t paid extra for it.

I won’t be allowed to overtake anything so will probably have to ride around really slowly.

You’re asked to ride as you usually would, not sit behind cars on B-roads. A ‘progressive’ ride will be looked on favourably, and your instructor will want to see you overtake and/or filter safely – there’s a whole section for it on the feedback form.

Police riders have to go through over six weeks of solid training before they’re qualified, and are re-tested every year. With any rider, there’s always room for improvement, and even if you pick up just one tip it’s well worthwhile. Insurance companies think so too, and many will knock you some money off your premium if you’ve done post-test training.