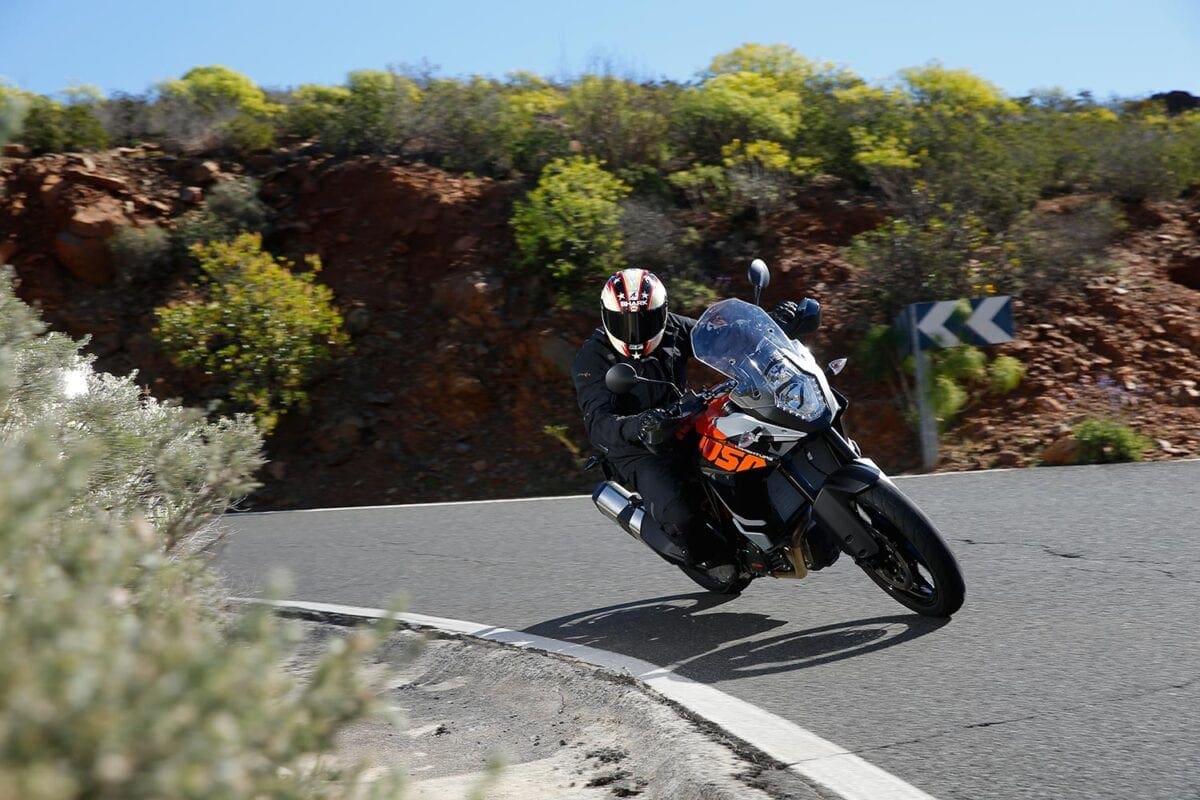 Based on the 1190, KTM’s 1050 Adventure came as something of a surprise last year – maybe we were all distracted by the bigger, louder new models. This machine is designed to be smaller, lighter and more efficient. Exciting yet safe… a bike for those that don’t want the 1290’s 158bhp. It can even be restricted to meet the needs of A2 licence holders… sounds like a great all-rounder to us!

A reduced bore and stroke of 103 x 63mm takes the 75° V-twin down to 1055cc. It gets 50g lighter pistons than on the bigger motor, and there’s a new crankshaft with more rotating mass on the flywheel and rotor. All this equals a lively engine that spins up quickly even from low in the rev-range. 93bhp and 79lb-ft of torque are healthy figures for an adventure machine, with the power output being the maximum permissible on a bike that can be restricted for an A2 licence.

Cleverly, while the 1190 peaks at 148bhp and 92lb-ft of torque, the 1050 still matches it up to 6000rpm. After that, it does drop off very quickly, so to avoid spending your time bouncing off the rev-limiter, you need to be pretty quick with the gear-changes if you’re really winding it on.

A slipper clutch helps prevent the rear wheels from chattering under heavy braking or deceleration, and is set up to reduce the lever force needed during gear changes. Service intervals for the engine are every 15,000km – 9320 miles. 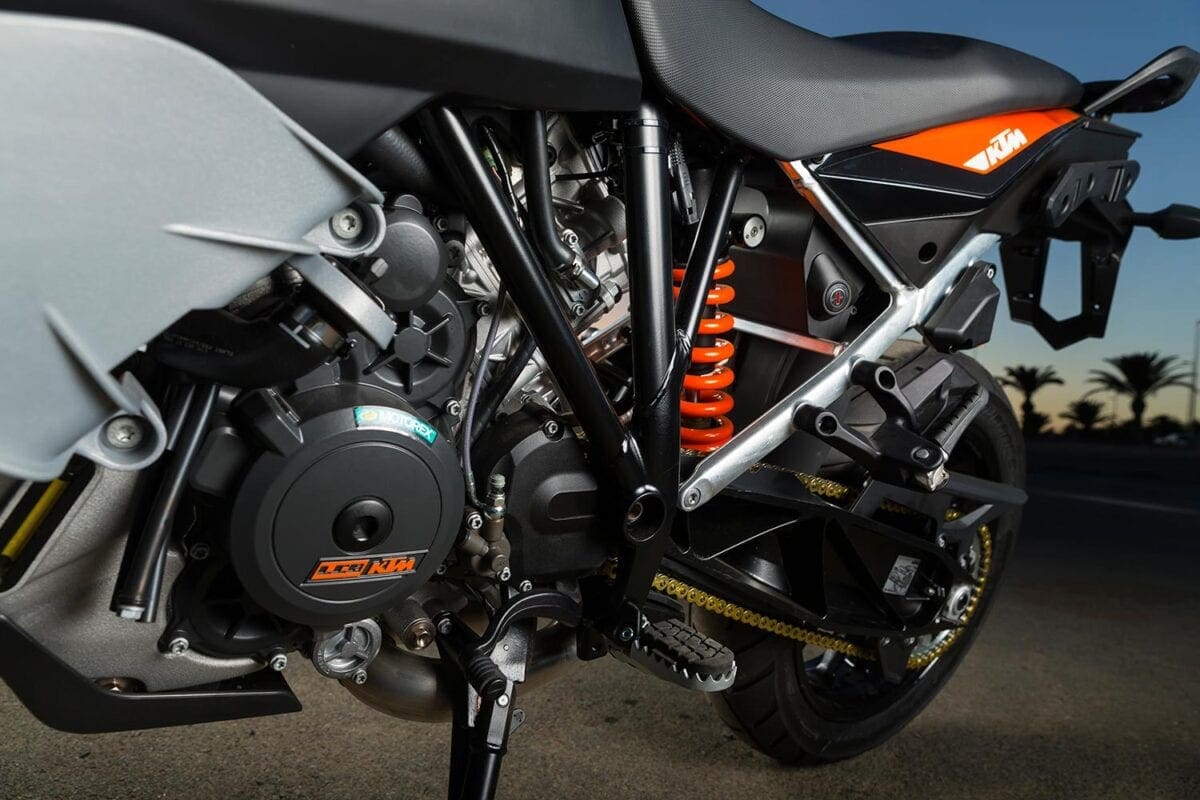 Designed with the newer rider in mind (but that doesn’t mean it’s not a great bike for those with plenty of miles under their belts), the 1050 Adventure is all about agility. It might look like a ‘big and a bit scary Adventure bike’, but compared to the 1190 it’s got a 10mm lower seat, and it’s 5kg lighter. It’s also got smaller tyres – 110/80 and 150/70 Metzeler Tourance Next as standard – helping to make it more nimble by being mounted on lightweight die-cast wheels. The bars are wider and have two positions to choose from, plus the footpegs can be adjusted by 10mm. It’s like all the scary bits of a modern big Adventure bike have been dialled down a fraction to let riders just enjoy the trip and take in the scenery.

There’s 185mm of suspension travel on the front, and 190mm on the rear. A pair of four-piston Brembo radial calipers bite 320mm discs on the fore, with the Bosch 9M+ system controlling these, and the twin-piston Brembo on the aft 267mm disc. The same ride-by-wire and traction control of the 1190 Adventure is fitted here too – again, it’s a friendly package that’ll keep you out of trouble, even if you’re a bit ham-fisted with the superb, light-action throttle. 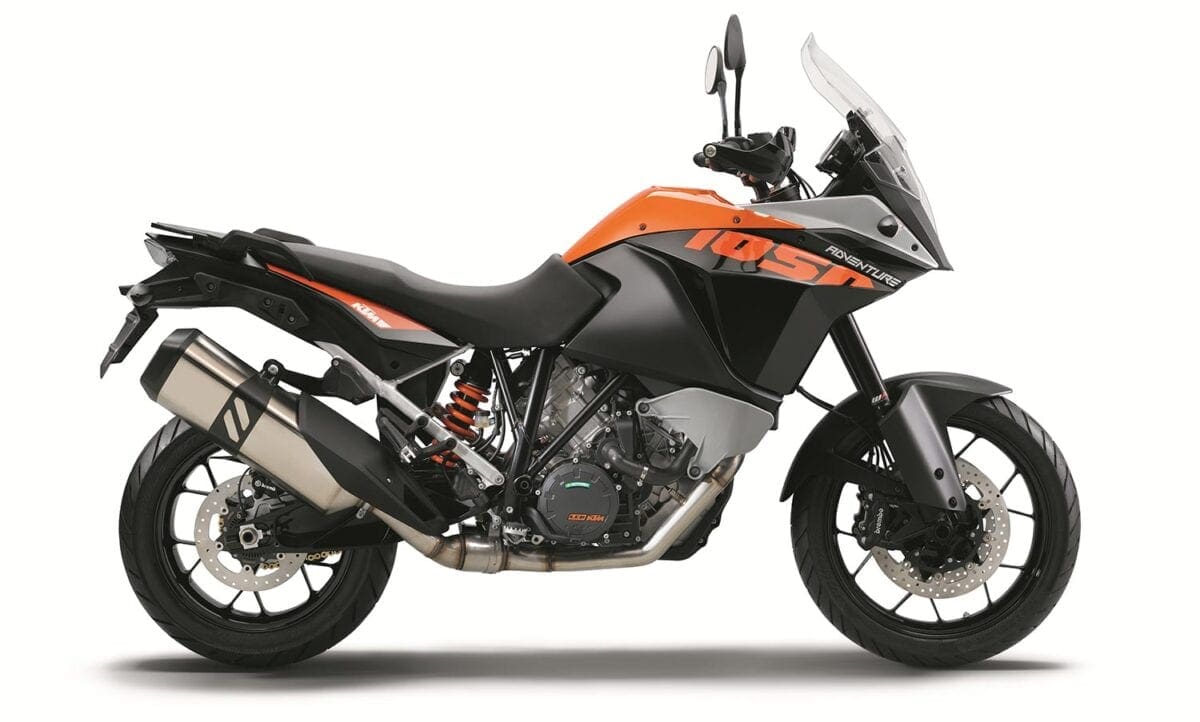 There are three levels of traction control (plus an optional off-road mode, or you can turn it off altogether). Selected by the switch on the left bar, ‘Sport’ allows for some sliding and is described as “something for the courageous to try – drift-feeling all-inclusive”. ‘Street’ delivers full engine power, but offers smooth control should the tyre break away. ‘Rain’ works much quicker, to allow for minimum slip in the wet. The optional off-road mode lets the rear wheel travel at up to twice the speed of the front, for more ‘ambitious’ use off the beaten track.

The laser-cut tubular chrome-molybdenum stainless steel, powder-coated main frame carries unadjustable WP 43mm upside-down forks and a WP rear shock that can be tweaked for preload and rebound. The die-cast, open-lattice swingarm is designed to be light and stable, with a controlled level of flex.

With a maximum total weight of 440kg, assuming a 14 stone rider and 10 stone pillion, that leaves a good 57kg of spare capacity – far more than you should need to be trying to strap to the bike for an adventure! 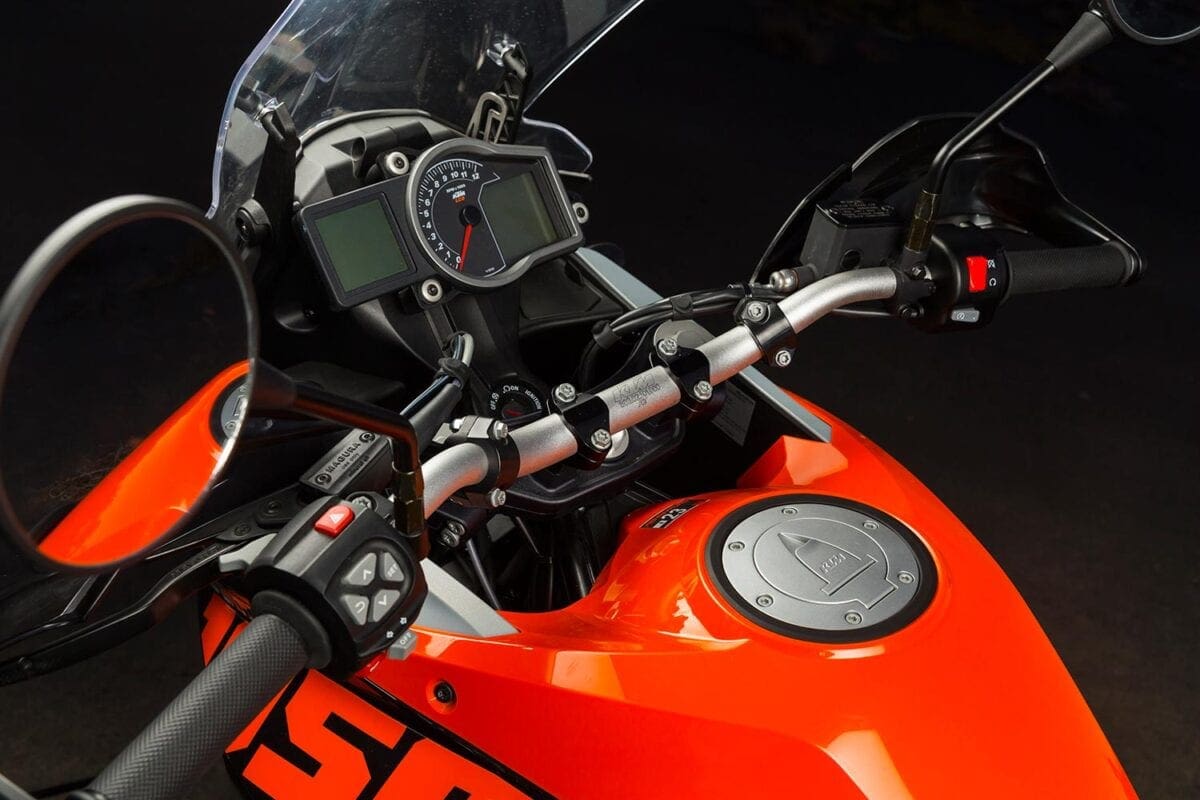 This is the junior of KTM’s big-bike Adventure family. While it’s based around the same motor as the other three Austrian machines, the 1050 has been built for a different type of rider than you might usually associate with many of the orange nutters of the on- and off-road world (and I use the word nutters with a lot of affection). Its lighter weight and more modest power combine with the superb safety features that’s as suited to a new or inexperienced rider as it is to anyone looking to keep things in a more calm world of riding.

Like the bikes’ 1290 big-brother, the 1050 also gets KTM’s new self-cancelling indicators, which reset after 150m and 10 seconds of riding – I’ve never been much of a fan of KTM’s indicator controls because, for me at least, they don’t actually move enough to give the satisfactory feeling that they’re in place, so the new self-sorting system is more than welcome.

The Liquid Crystal Display clocks offer the usual array of info, speed, trips and revs, plus an adjustable gearshift light and a user-definable ‘favourites’ screen. You’ll also find ride modes and outside temperature, oil temperature, Voltage, average speed, average and current fuel consumption, range and distance to next service. The screen can be adjusted for height within a 25mm range without any tools

You’ll also find the now-standard integrated luggage rack in the bike’s subframe, and with plenty of luggage options, this is a machine for the city commute, a weekend blast, or a tour of… well, anywhere. 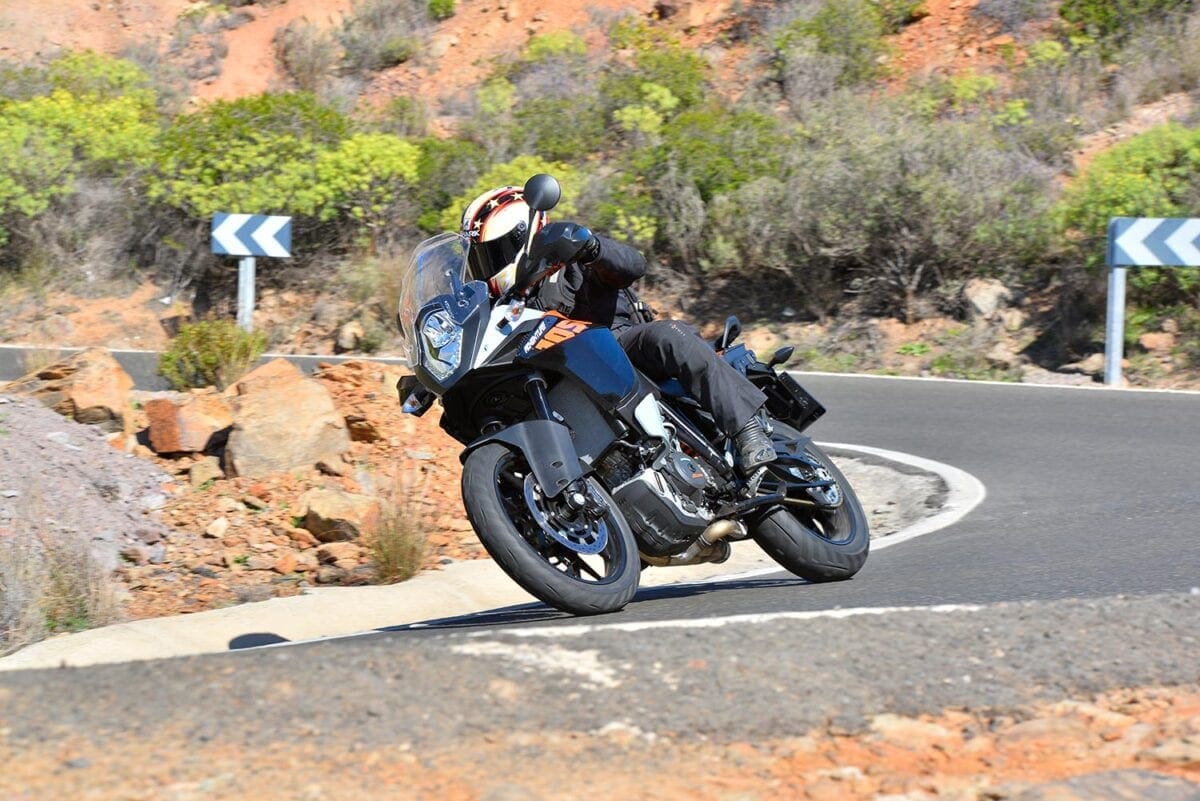 Riding the KTM is an odd mix of modern and old-school; all of it good. The technology works undetectably as you ride, and from nothing to 6000rpm this really is a peach of a motor; lots of crisp acceleration with plenty left besides for some effortlessly comfortable cruising at motorway speeds.

It’s with the handling that the 1050 really scores highly though; it’s an inspired choice by the Austrians to fit smaller tyres and drop the weight of this bike because you feel every bump and bobble of the road – It’s inviting and involving. Hit the brakes hard and that terrific initial bite and dive from the forks is planted and predictable. And as for comfort, it’s as good as anything on the market.

The 1050 Adventure’s nearest rival is something like the Triumph Tiger 1050, but despite that machine’s higher power (you couldn’t restrict it to A2), this bike feels lighter and snappier to ride (though it’s actually slightly heavier). Oh, and it makes a little more torque too.

If I had to pick holes, I’d say that I’m not a big fan of the un-painted sub-frame, but each to their own. Slightly more concerning is the price – eleven grand seems a bit rich to me for a bike that should appeal to (among others) the newer or less-experienced rider. You can get the new Tiger 800XCx for a shade under £10k, so the KTM has a real fight on its hands to win the buyer. Of course, if you ride it you’ll love it, so only time will tell if the price puts anyone off. 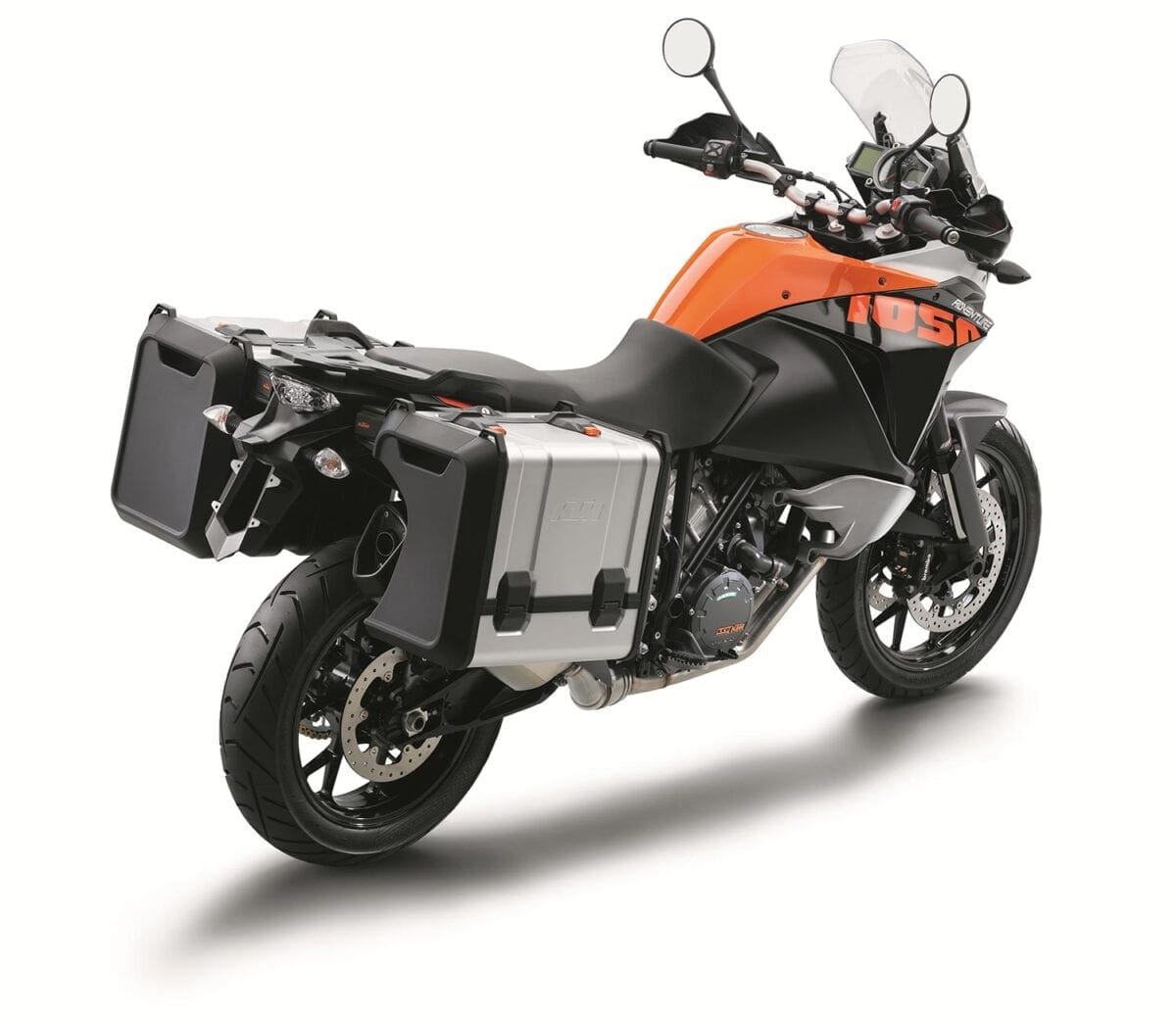 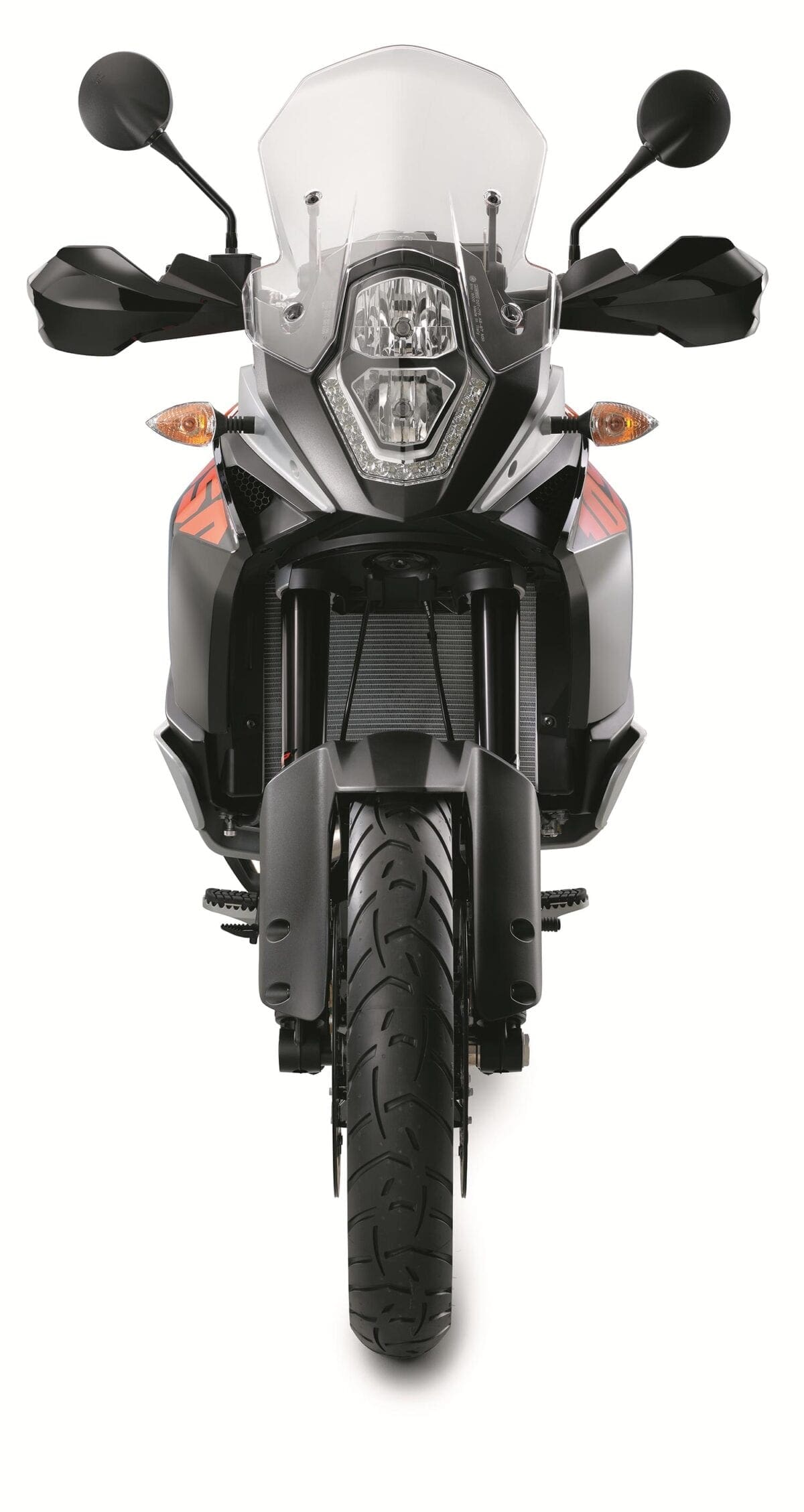