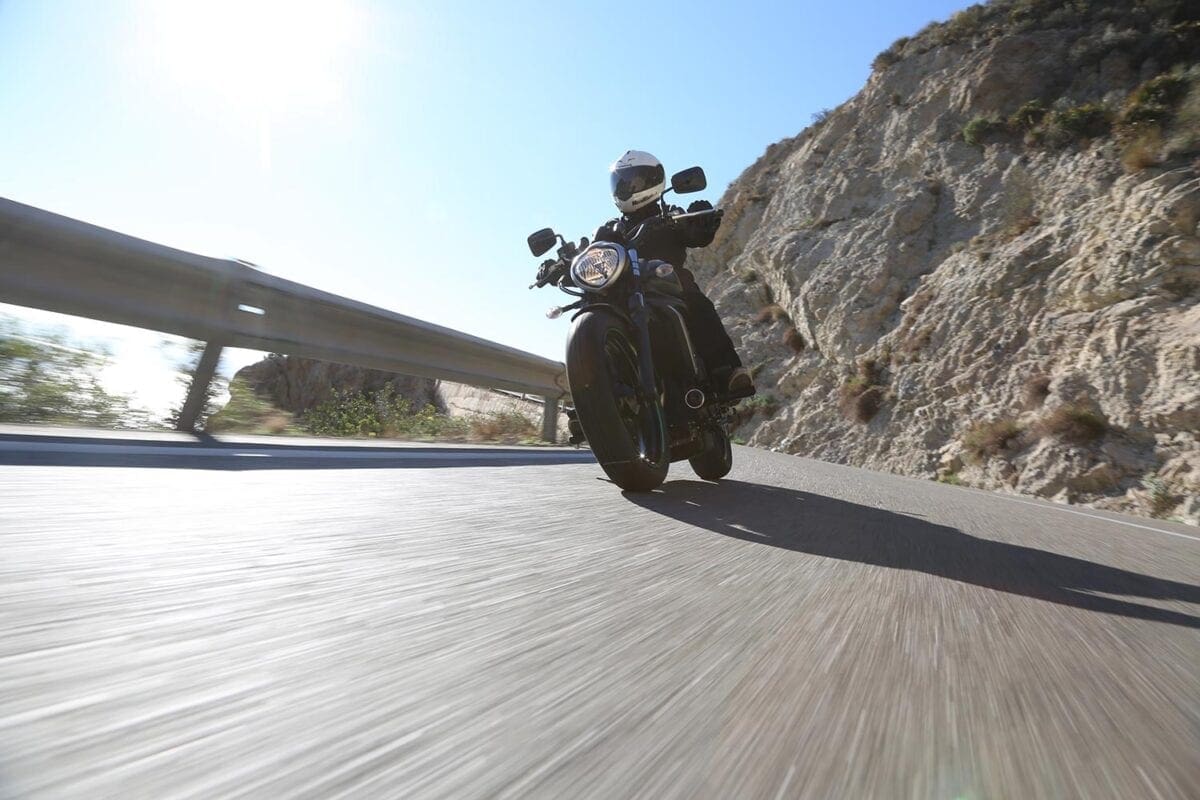 After conducting some serious market research, Japanese power-house Kawasaki has launched the brand new Vulcan S, with a focus on ergonomics, style and increased rider confidence. It might be listed under the ‘cruiser’ section of the Kawasaki website and carry the Vulcan name – normally associated with large capacity V-Twins – but the Vulcan S is so much more… 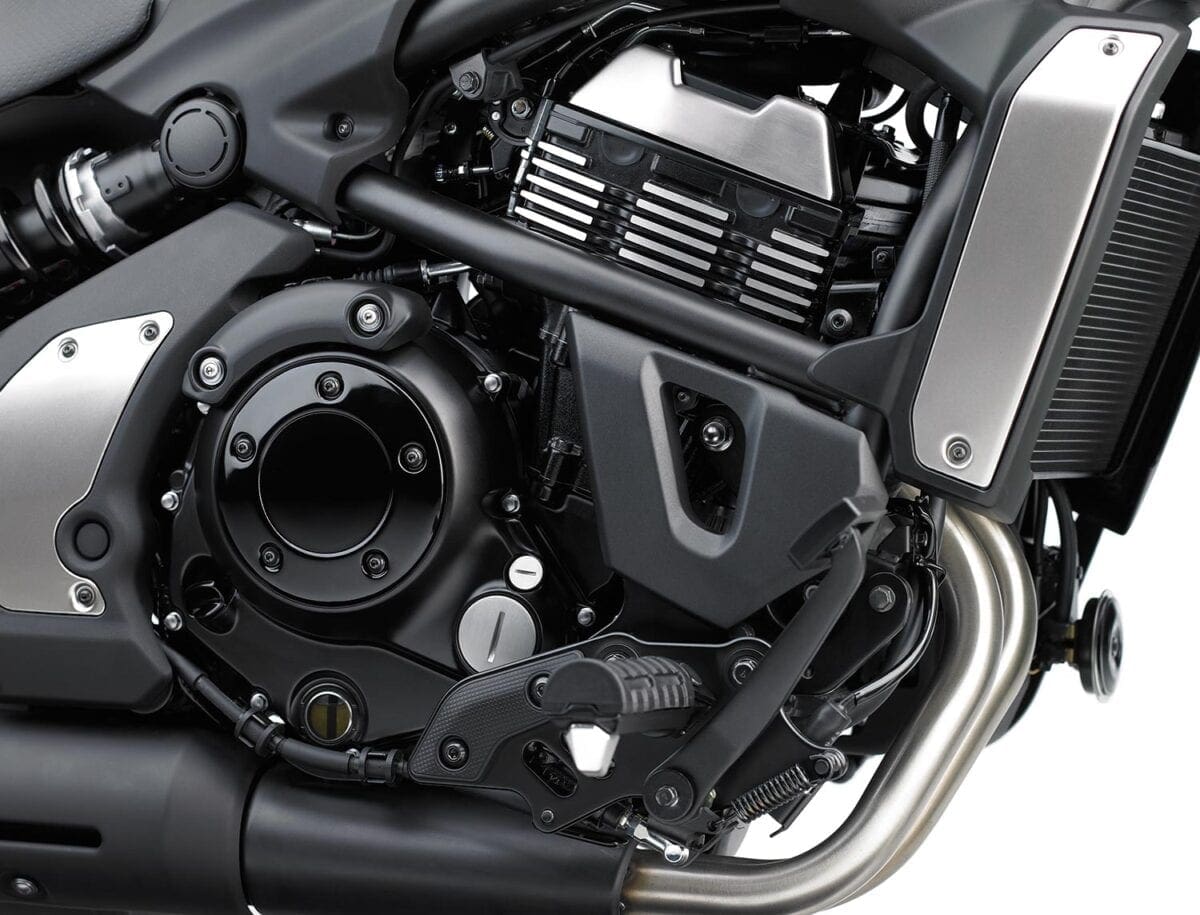 Packed into the steel frame is a retuned version of the Versys 650 and ER6 649cc liquid-cooled, four-stroke Specifically tuned to suit new riders, the lower-end rpm performance has been enhanced by tuning the camshaft profiles and intake funnels. On the launch, I deliberately approached junctions and roundabouts in too high a gear to see just how ‘friendly’ it is, attempting each time to make it stall. It didn’t, even in 4th gear going round a small roundabout; it just chugged round and recovered as soon as I opened the throttle.

It’s smooth to start from a standstill and the clutch is nice and light; there’s ample power when you pull open the throttle too – enough even to put a grin on the faces of more experienced riders. In comparison to the Versys and the ER6, torque is down by 0.5lb-ft, however it comes in 400rpm earlier in the revs. Power comes in 1000rpm earlier than its sibling bikes, with 8bhp less than the Versys and 11bhp less than the ER6.

Kawasaki claims that fuel efficiency has been improved by 5% over the previous ER6/Versys engine – I got 56mpg whilst on test, but the route took in motorway roads, plenty of starting and stopping, and a variety of road conditions so this could easily be improved. 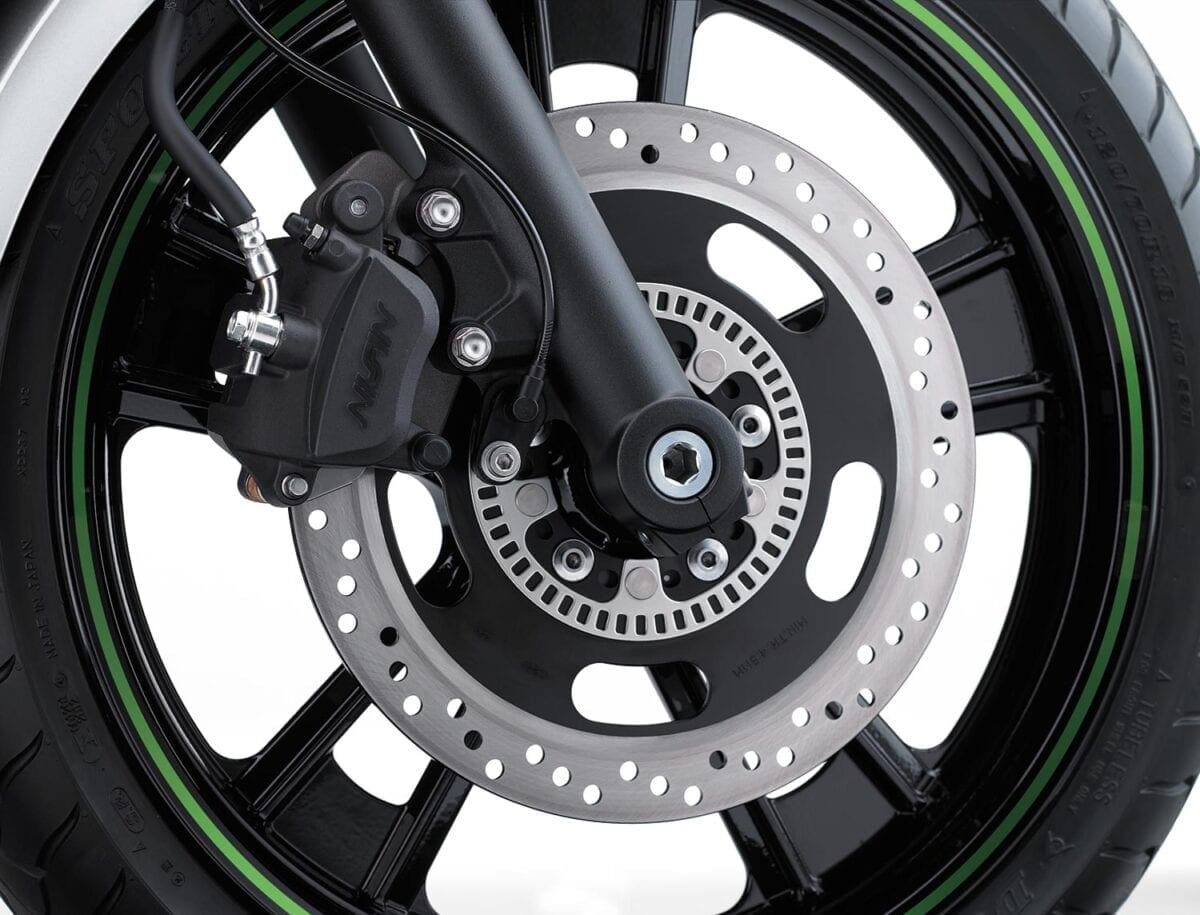 The Vulcan S has an all-new perimeter, high-tensile steel frame – a chassis that’s purposefully been kept slim so that you can get your feet down and weave through traffic with ease. A new exhaust system has been developed too, with an under-engine muffler to help retain this slim shape, and a dual-wall exhaust design for style.

The UK will be getting the version fitted with the Bosch 9.1M ABS unit. Braking is provided by a single 300mm diameter disc up front, gripped by a dual-piston caliper and a single 250mm diameter disc on the rear with a single-piston caliper. They’re progressive and confidence inspiring instead of snappy – again, a purposeful decision by Kawasaki to not shock new riders. 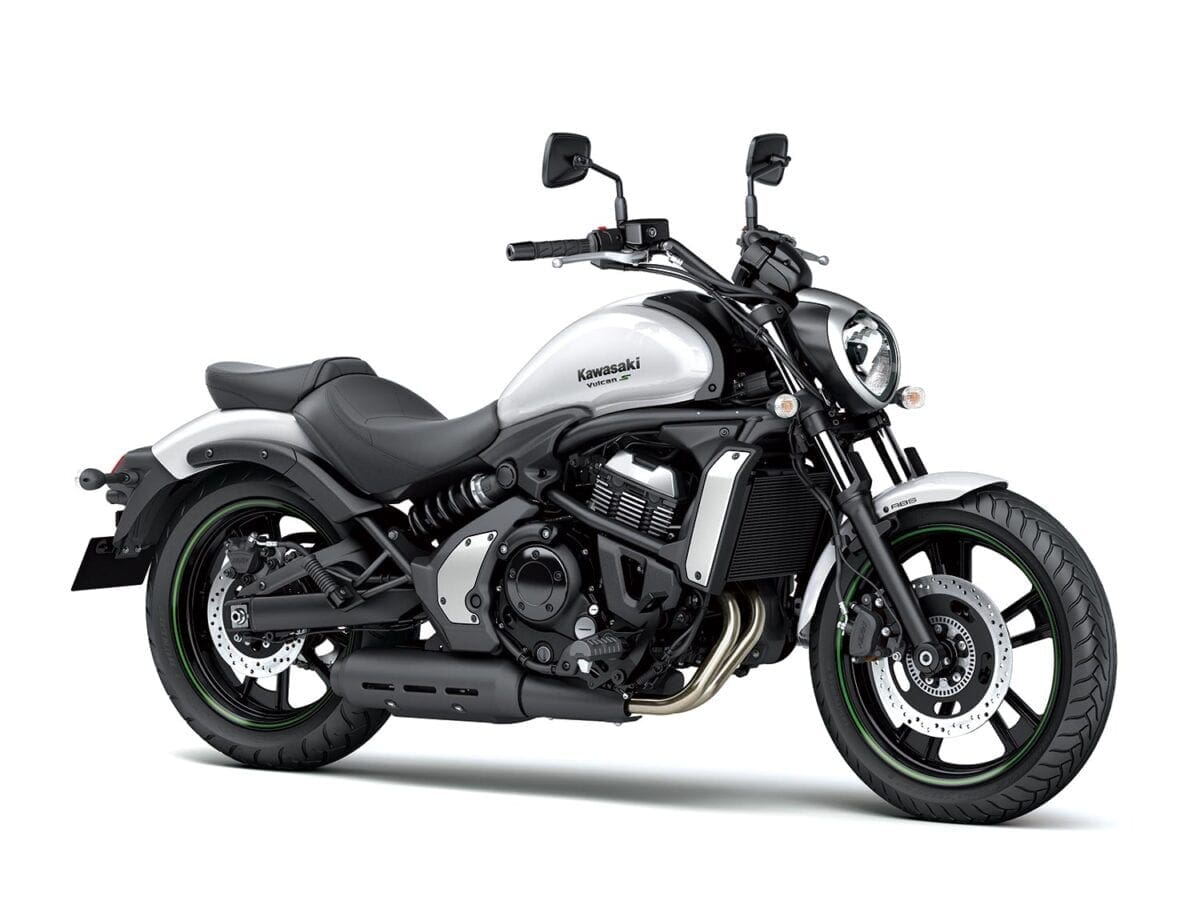 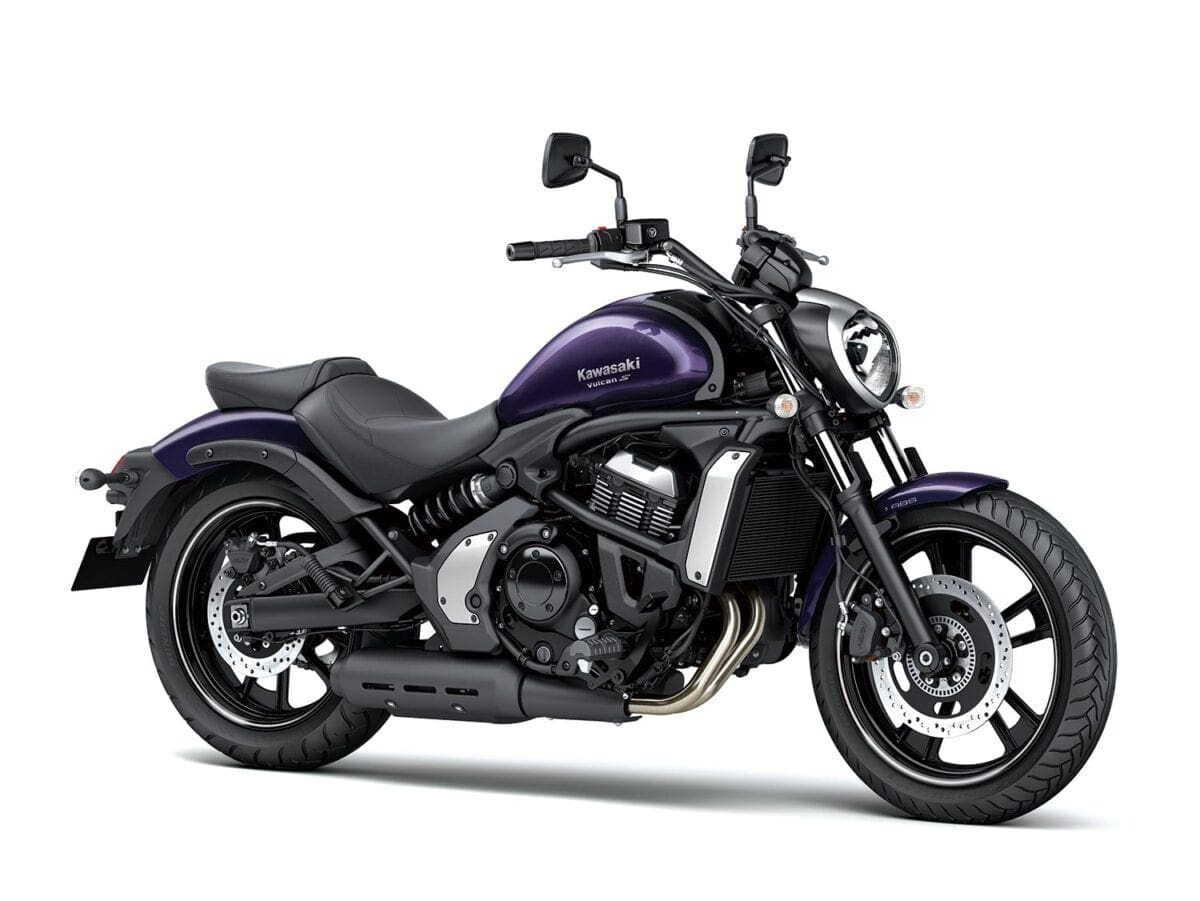 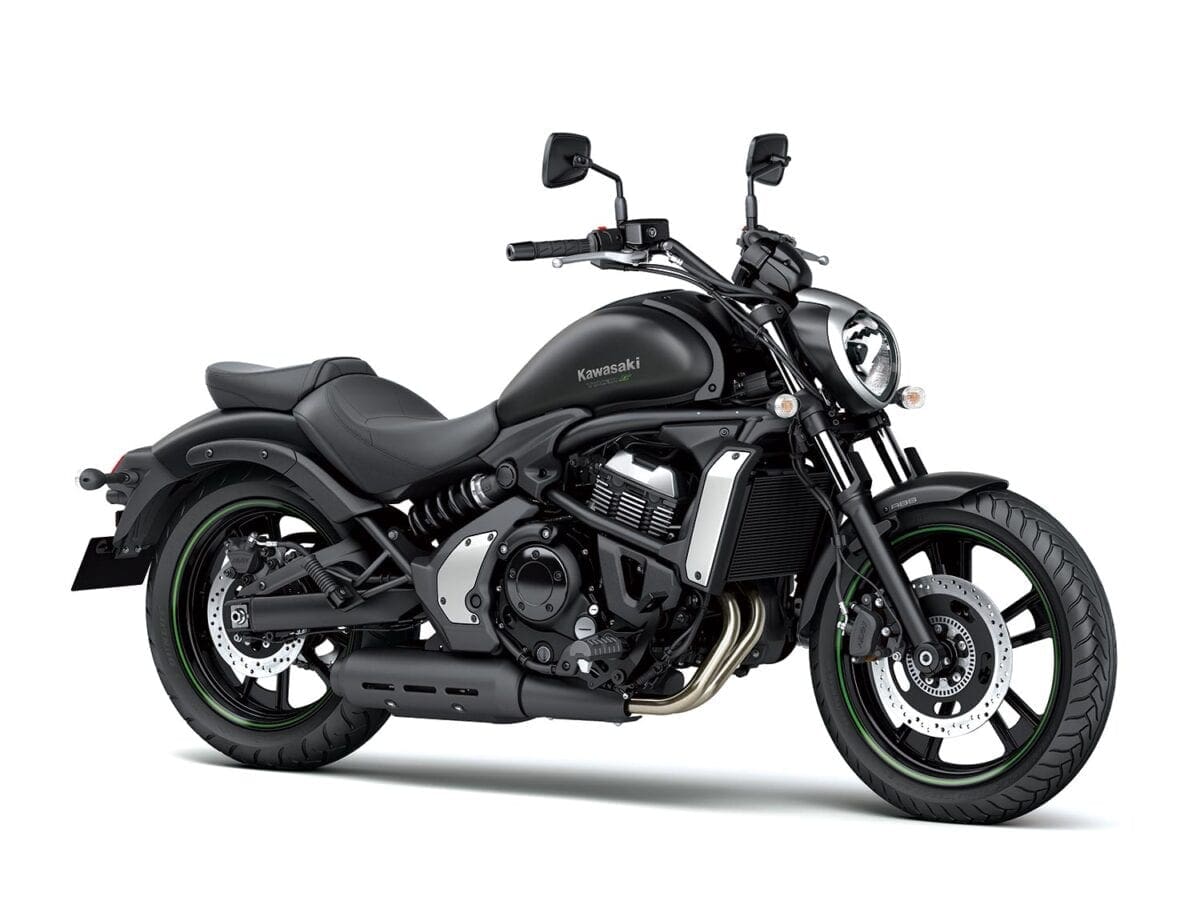 The telescopic fork on the front and the offset laydown single-shock linkage – equipped with 7-way adjustable pre-load – on the rear offers great suspension and easily dealt with the differing road conditions on the launch. New five-spoke cast wheels have been developed for the Vulcan S – there’s an 18” on the front and a 17” on the rear.

Kawasaki decided to make the Vulcan S chain driven rather than shaft or belt driven to limit the amount of ‘mechanical loss’ in the drivetrain – making the most of the 649cc engine – plus it’s lighter, helping to keep the kerb weight nice and low at 225kg.

At 5’6” I could easily reach the feet-forward controls and the floor thanks to the 705mm seat height. One of the key points of this machine is the customisation available – the brake and clutch levers have five different settings and the footpegs can be adjusted into three different positions – either keep them standard or move them forwards or backwards by 25mm. 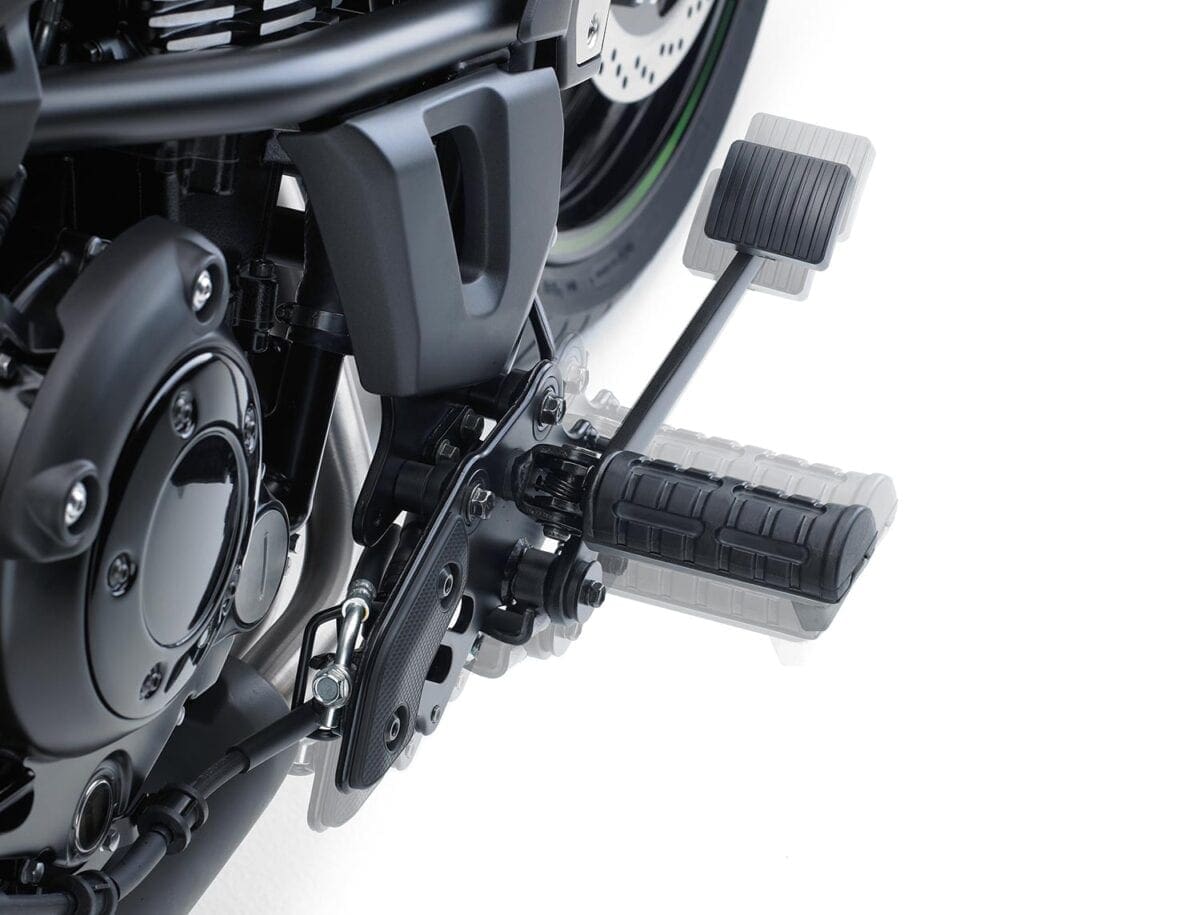 And that’s not where the personalisation stops – Kawasaki are calling it ‘ERGOFIT’. There are three choices of setup: reduced reach, mid-reach – which is the standard machine as bought in a dealership – and extended reach to suit short, medium and tall riders respectively. Those needing reduced or extended reach have the option to change the handlebars and the seat from the accessory range, which change the dimensions of the bike. Exact prices haven’t been announced yet but it’s expected to be around £230. 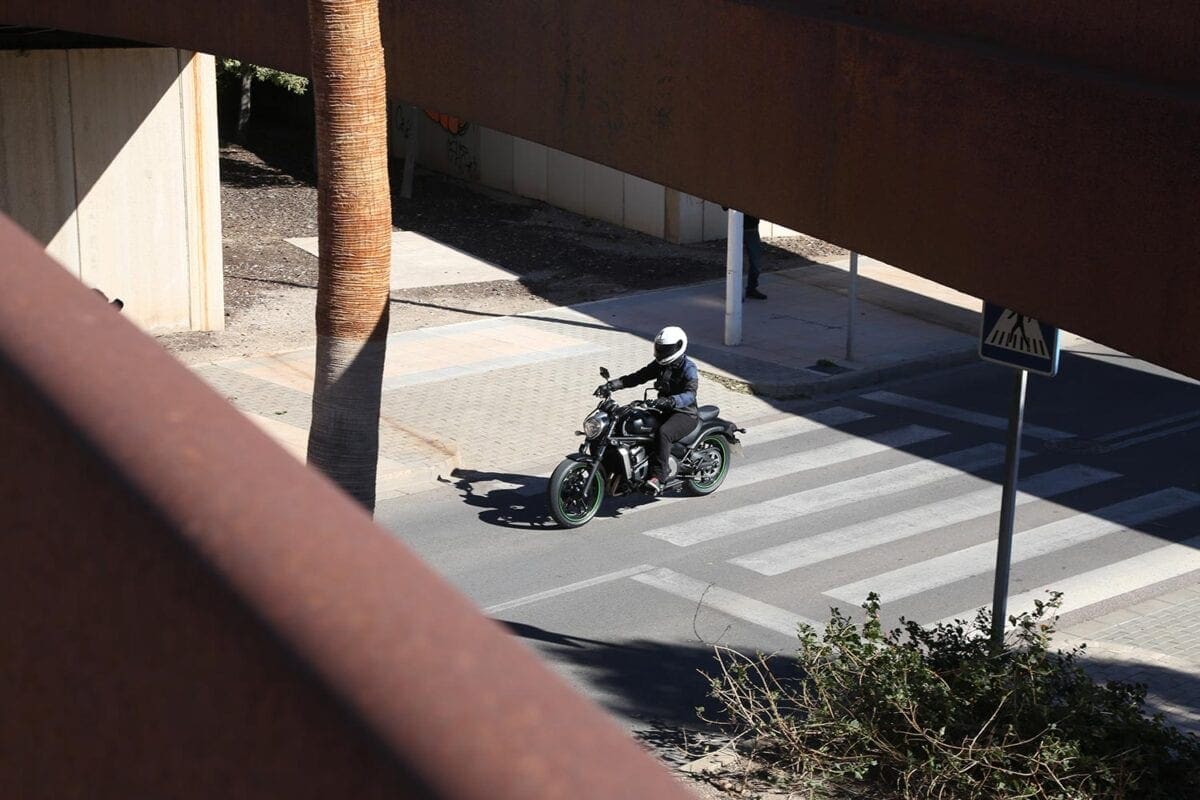 Whether you’re a new rider, aren’t terribly tall or are looking for a machine to build your confidence – then the Vulcan S may be the right choice for you. It’s got a friendly but gutsy engine, a nice low seat height and there are plenty of opportunities to make the bike your own.

“We want to make riders’ entry into the two-wheeled market as comfortable and as fun as we can. We want them to want to be motorcyclists for the rest of their lives.” said, Martin Lambert, Kawasaki’s European Press Officer.

Kawasaki was keen to point out that it doesn’t see the Vulcan S as ‘just a cruiser’ – it’s put its own spin on it and taken a fresh look at a cool custom cruiser. The bike is dliberately not covered in chrome, although an extensive list of accessories including chrome covers mean you can change the bike to suit you both functionally and to match your style. 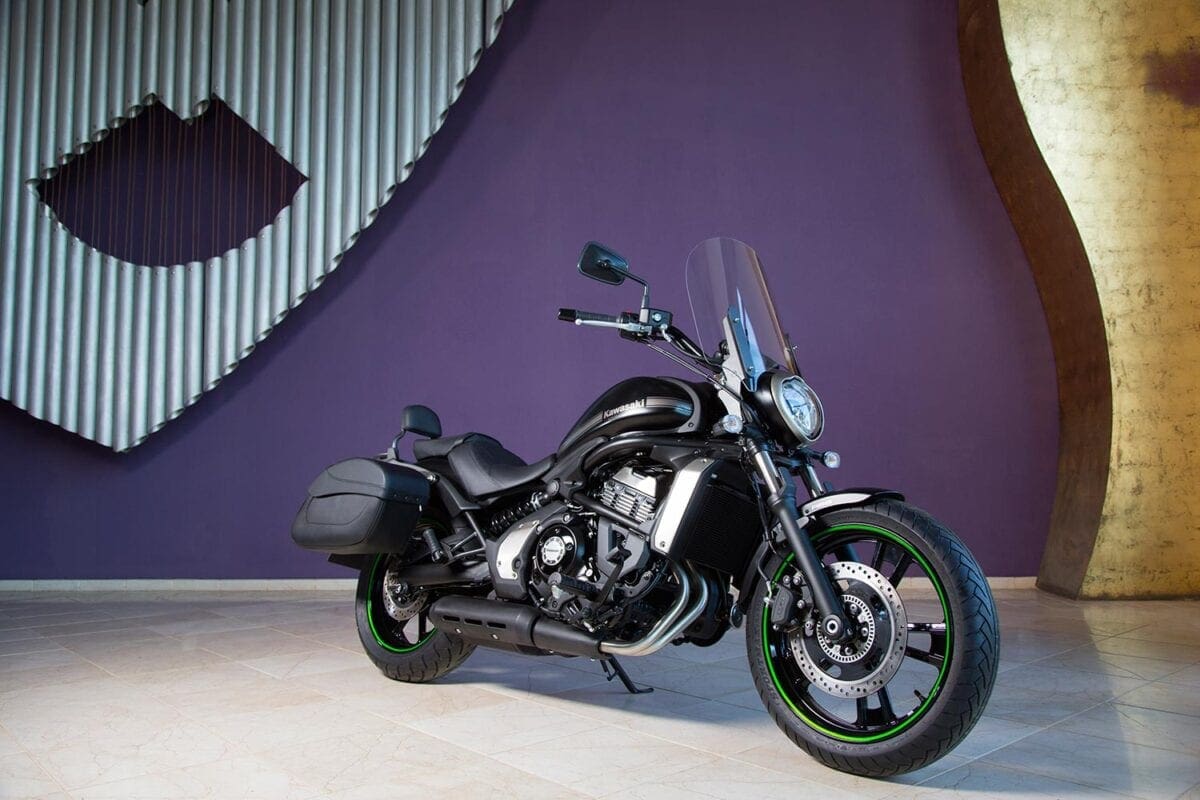 Those with an A2 licence can get a piece of the Vulcan S pie too, as an A2 compliant version is available. Once you get your full licence, tsimply take it to your local dealer and have the restrictor kit removed. 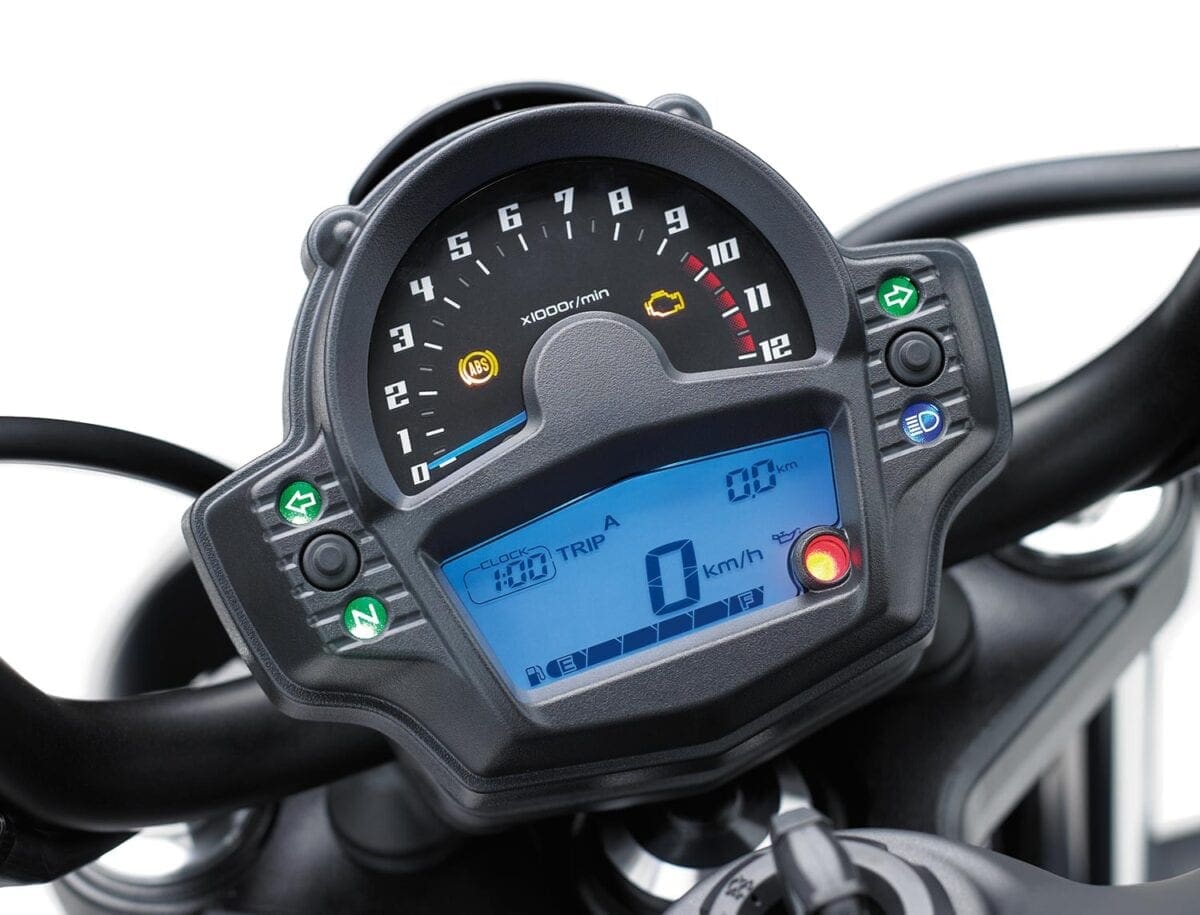 Sitting on the plush leather seat I felt like Cinderella – here was a bike that fit me! I don’t consider myself a short person, but often on larger capacity machines I find I have to shimmy around to reach things, and putting my feet flat on the ground can often be a challenge. It looks like a bulky machine, and it is substantial, but I was really surprised at the light weight. 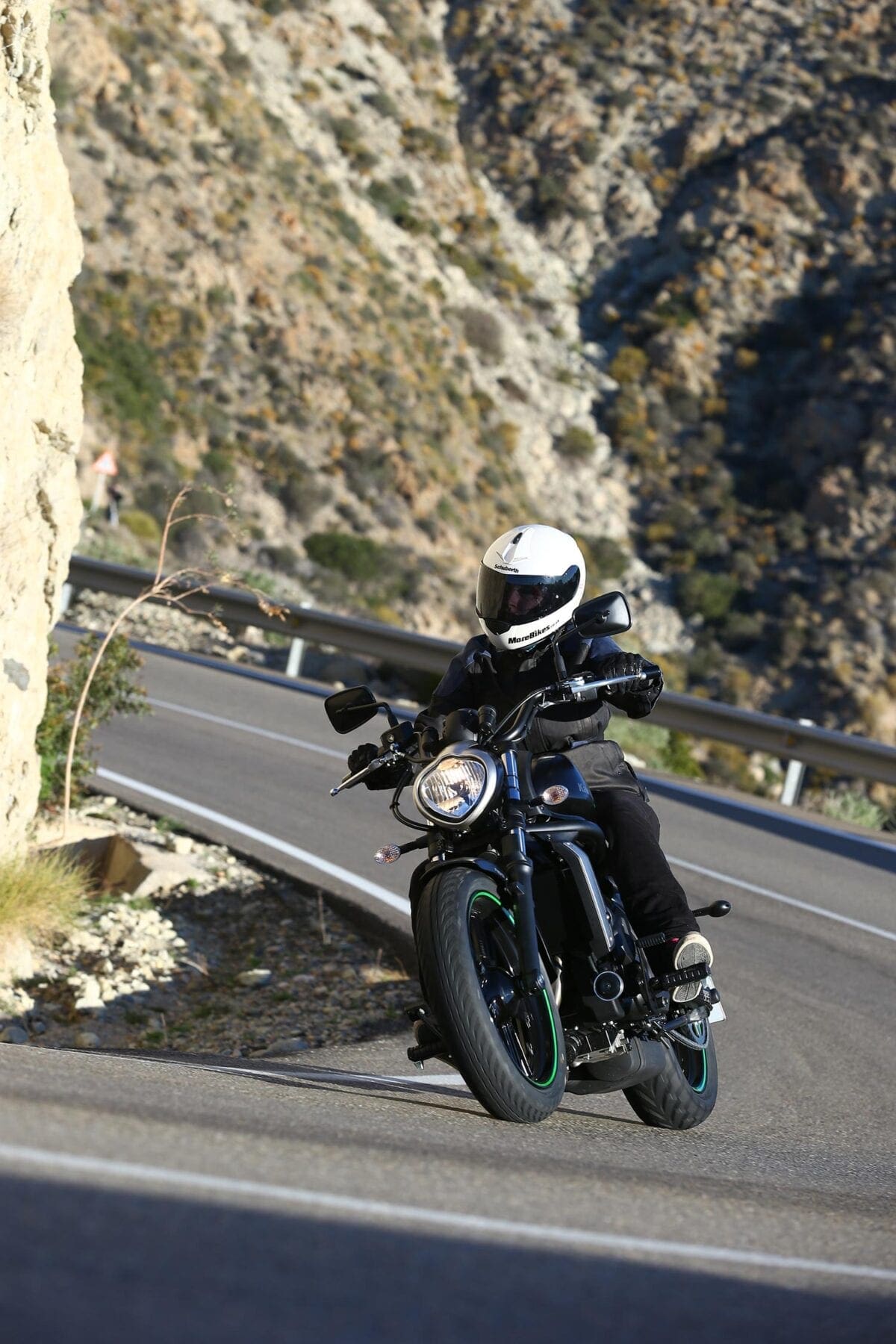 Once you’re off, the traditional-style mirrors give plenty of vision behind, and thanks to the stripped-back dash there’s a panoramic view of the road ahead, with the fat handlebars offering the perfect frame.

The engine purrs underneath you and is more than happy to play nicely around the city streets. The slim chassis allows you to filter with confidence and the immediate acceleration powers you into (and out of) any gaps. Find yourself an open road and some twisty bends, and the engine comes alive… before you know it, you’re performing roaring overtakes and having a hell of a lot of fun. It’s easy to manage, and won’t shock even the newest of riders as the power builds progressively.

Often with ‘cruiser-style’ machines there is the chance – and often not the choice – of ‘grounding out’, whether it be the footpegs or the exhaust that scrapes along the floor. But this wasn’t a problem on the Vulcan S as it has a respectable ground clearance of 130mm. Cornering requires very little effort on the bars, and working my way around the sweeping Spanish bends I found myself hankering after more.

So, it looks the business, has a friendly but grunty engine, and you can customise the fit to suit you – and all this for just over £6000. Nice work Kawasaki… 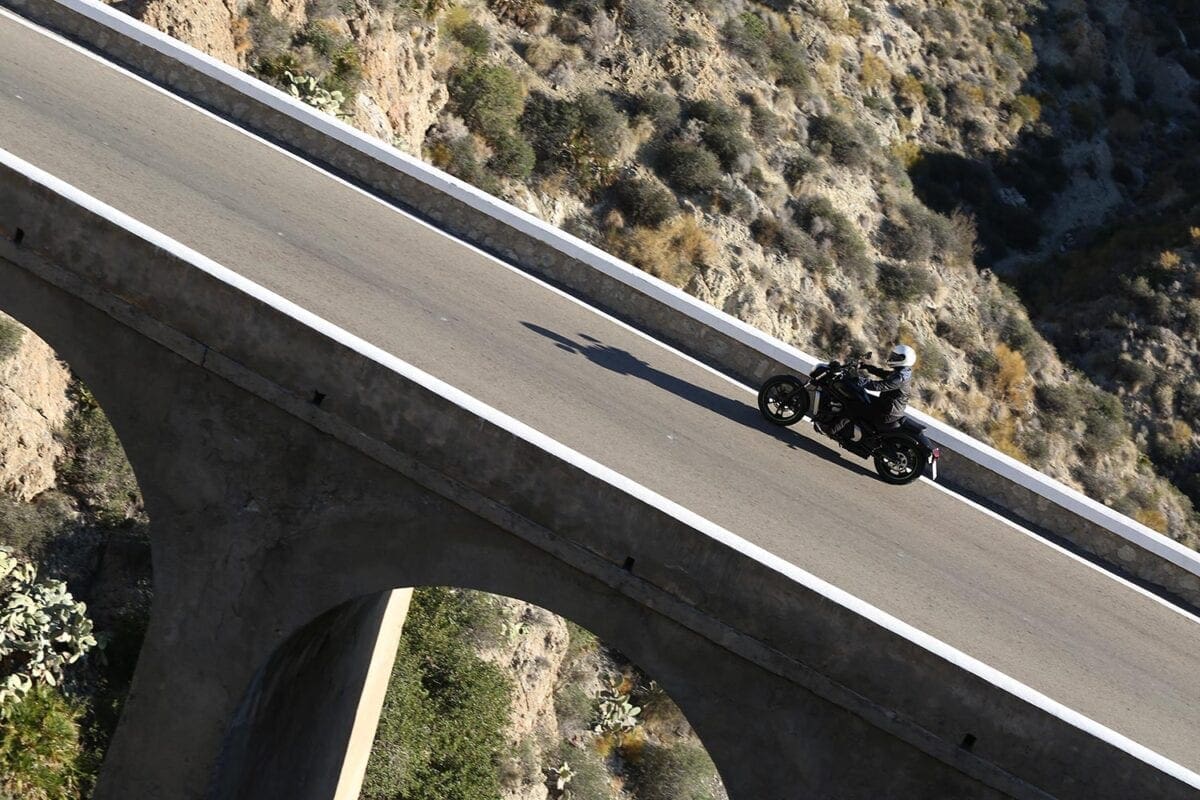 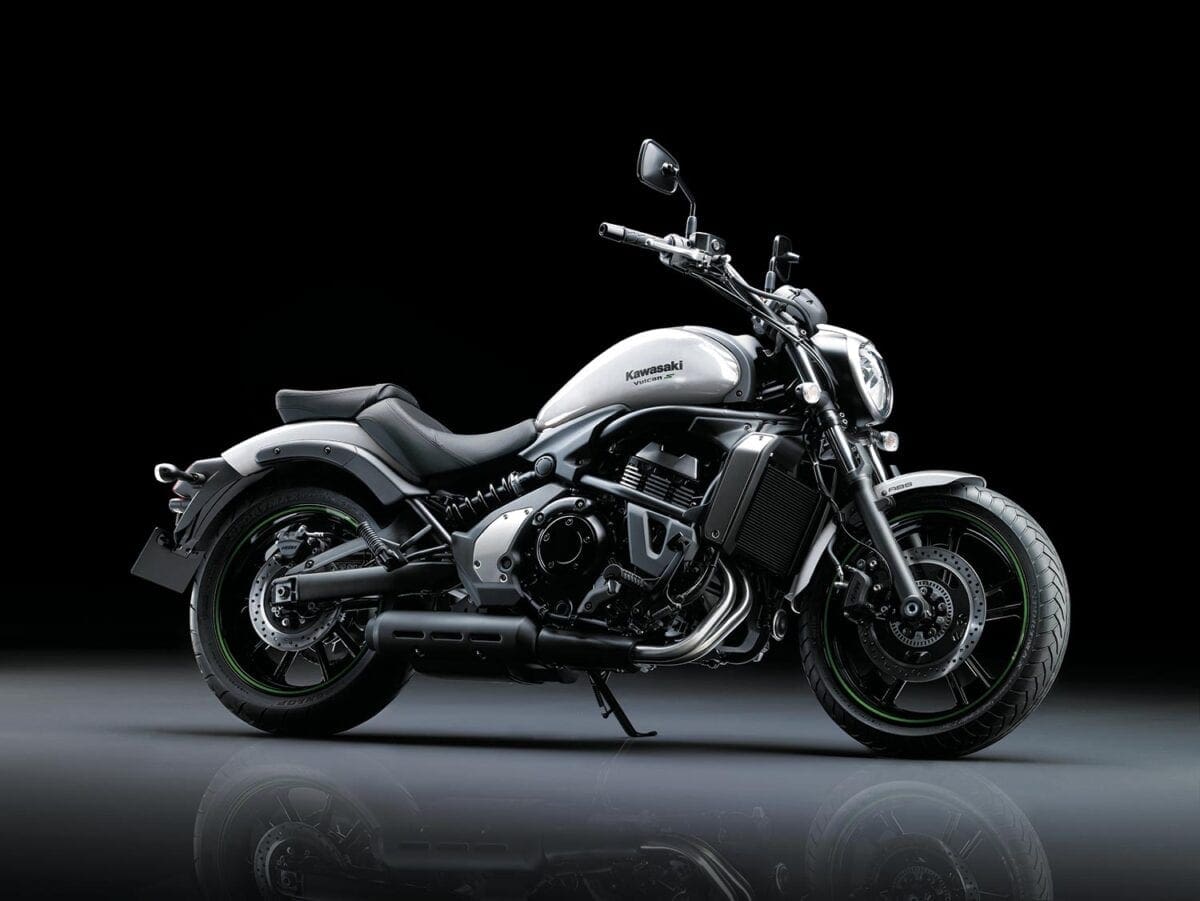