Created in the early 1950s, the Peugeot S55 was a comfortable and well-equipped two-seater scooter, which over time evolved into the S57. It is from these two models that the new Peugeot Django range has been created. Nostalgic retro looks combine with modern technology, like a 12V socket and Synchro Braking Control (SBC) on the Evasion, Sport and Allure models. As Vespa and Lambretta have proved, there’s a big market for retro scooters – and Peugeot wants a piece of the pie… 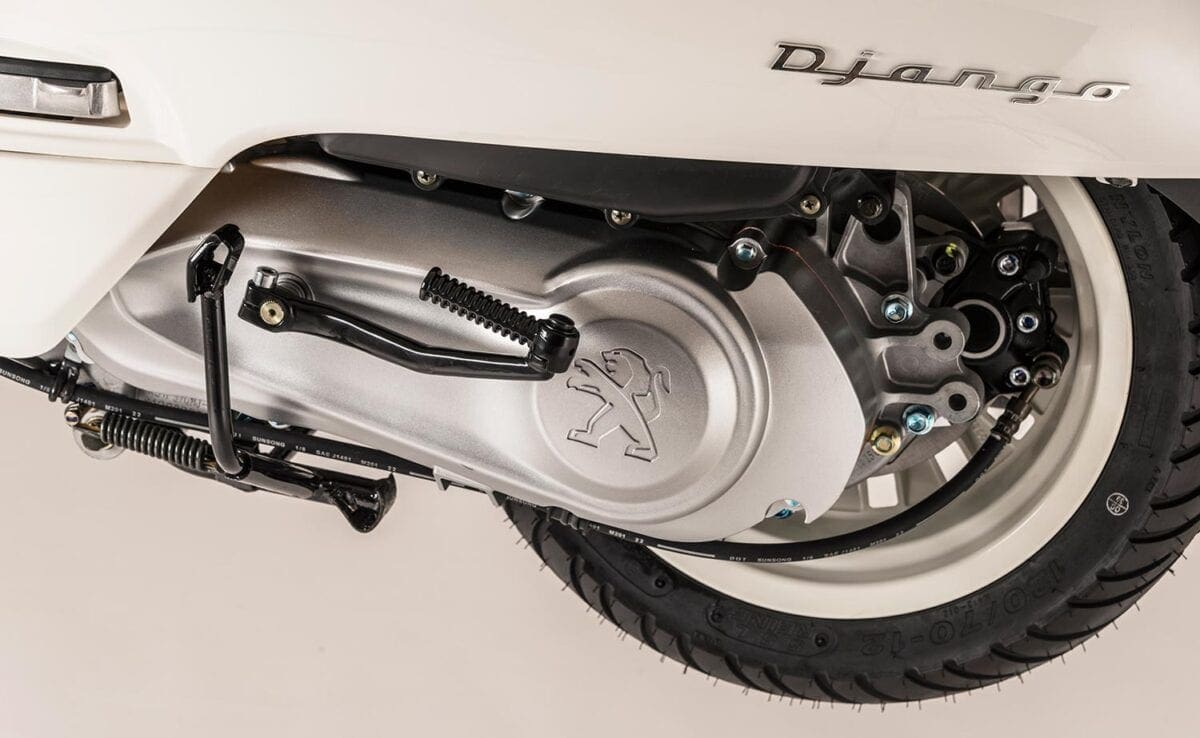 All four versions of the scooter feature the same single cylinder, four-stroke, air-cooled 124.6cc engine. Whizzing around Oxford in the rain, the power delivery was smooth and progressive, and when rolling back the throttle, it’s quick off the mark and slipped easily through traffic. Top speed was around 60mph, but with a few more miles on the clock, it’s possible you’d get some more mph from the loosened engine.

We test rode the 125cc models, which are available in dealers now and suitable for A1 licence holders. The UK distributor – Three Cross Motorcycles – is also planning to bring in the 50cc two-stroke version – which is AM compliant – and the 150cc four-stroke for A2 holders, which should be arriving in dealers in March 2015. 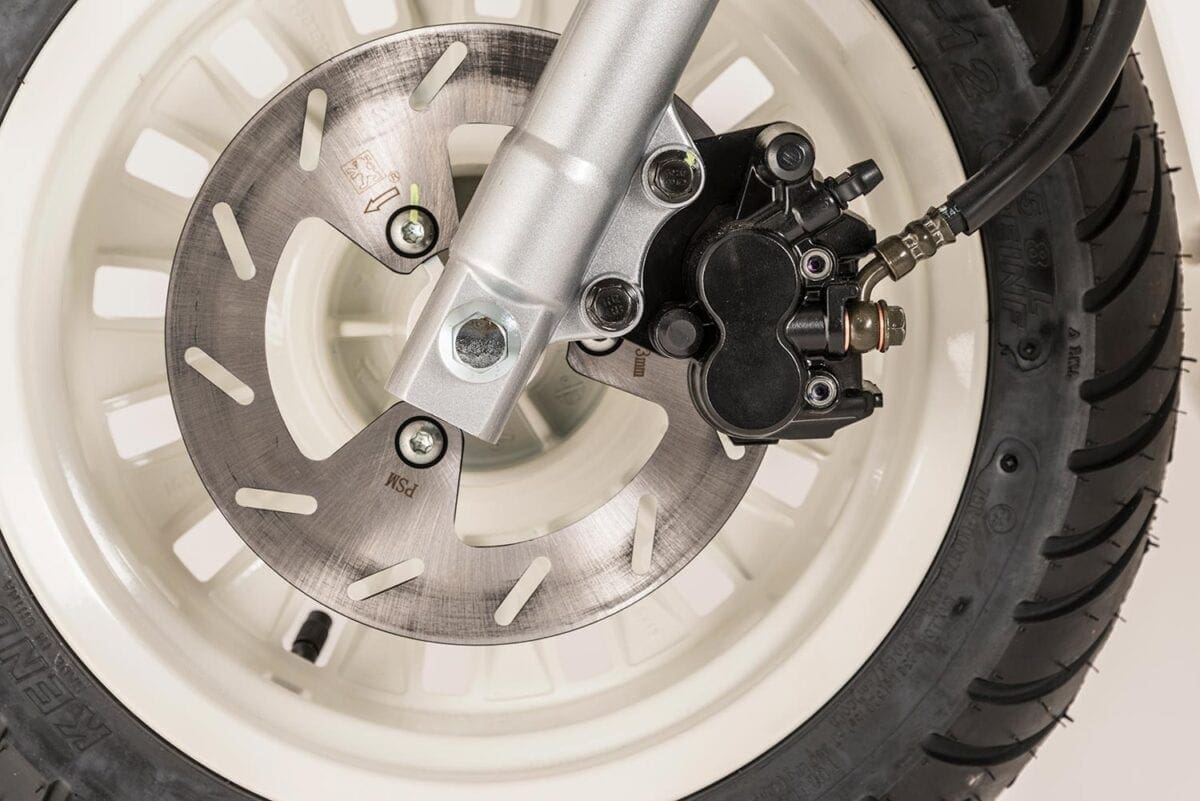 All the models in the range feature 200mm disc brakes on the front and rear The Evasion, Sport and Allure also have Peugeot’s Synchro Braking Control (SBC) to link the front and rear brakes for controlled and balanced stopping power. This also helps to eliminate front end ‘dive’, even under hard braking. Peugeot’s claim is that SBC is ‘a lighter and less expensive alternative to ABS that offers similar advantages in everyday use.’ A plush ride is provided by the suspension in the form of hydraulic forks on the front and a single hydraulic shock on the rear.

If you’re after a cool looking, retro-styled machine that’s packed with modern tech, then the Django is a good choice. Peugeot has kept its pricing as low as it can by partnering with SYM for the internals of the machine, and manufacturing the scooters in China. These parts aren’t used by any other brands, as they’re bespoke to Peugeot. Development and production tests are carried out in France, and I was impressed with the level of finish, which you would expect on much more expensive models. 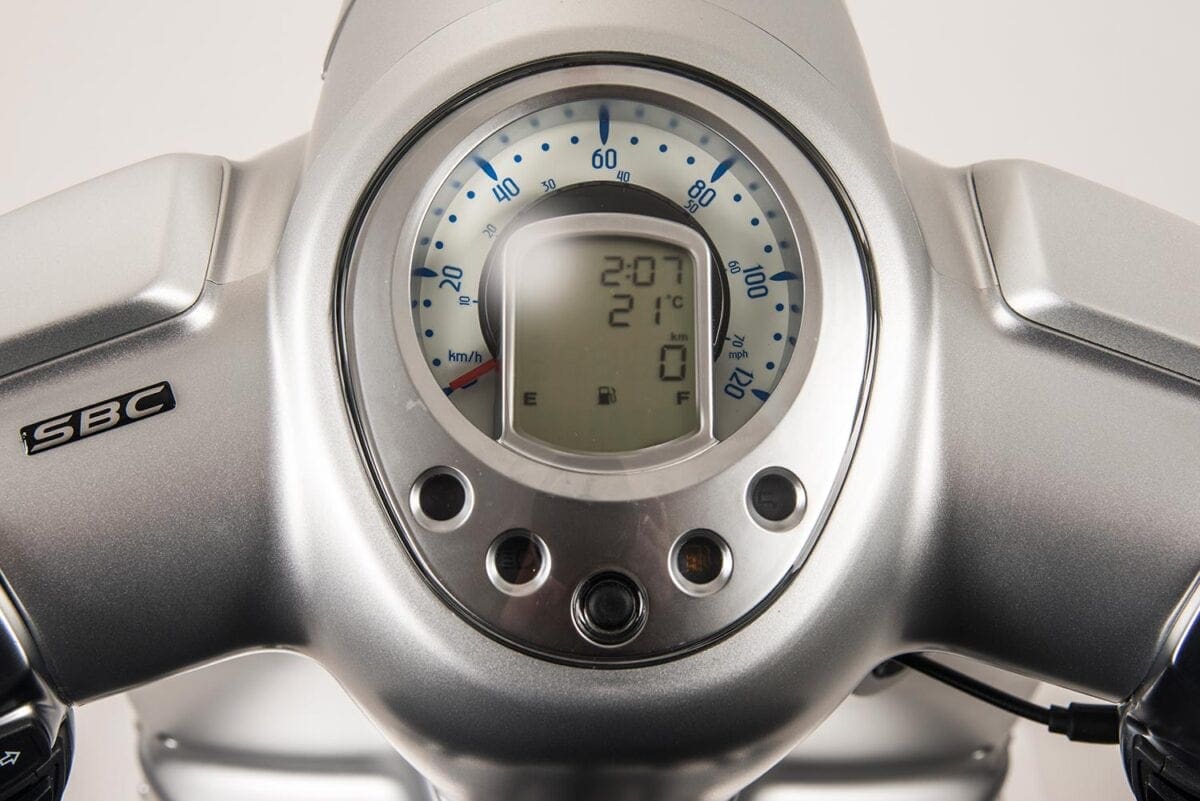 The entry level Heritage is priced at £2499, and has a monotone paint scheme in white, black, blue and green, with white wheels, silvered mirrors and chrome detailing. Unlike the rest of the range, it doesn’t have SBC or the LED lighting strip around the Peugeot logo.

The Evasion costs £2799, and has a two-tone paint scheme, a screen and fold down carrier, SBC braking as standard, piped and ribbed seat and brushed aluminium finished mirrors.

The Sport costs £2799 and comes with SBC in two colours – blue and silver. The wheels are silver, and you can choose whichever numbers you like to add to the white circles. The rear seat cover can easily be swapped to make it a dual-seat scooter.

None of the models say which ones they are – instead just displaying the ‘Django’ name. The concept is very much that each machine is modular – parts and accessories can be added, and colour schemes chosen to personalise the Django. 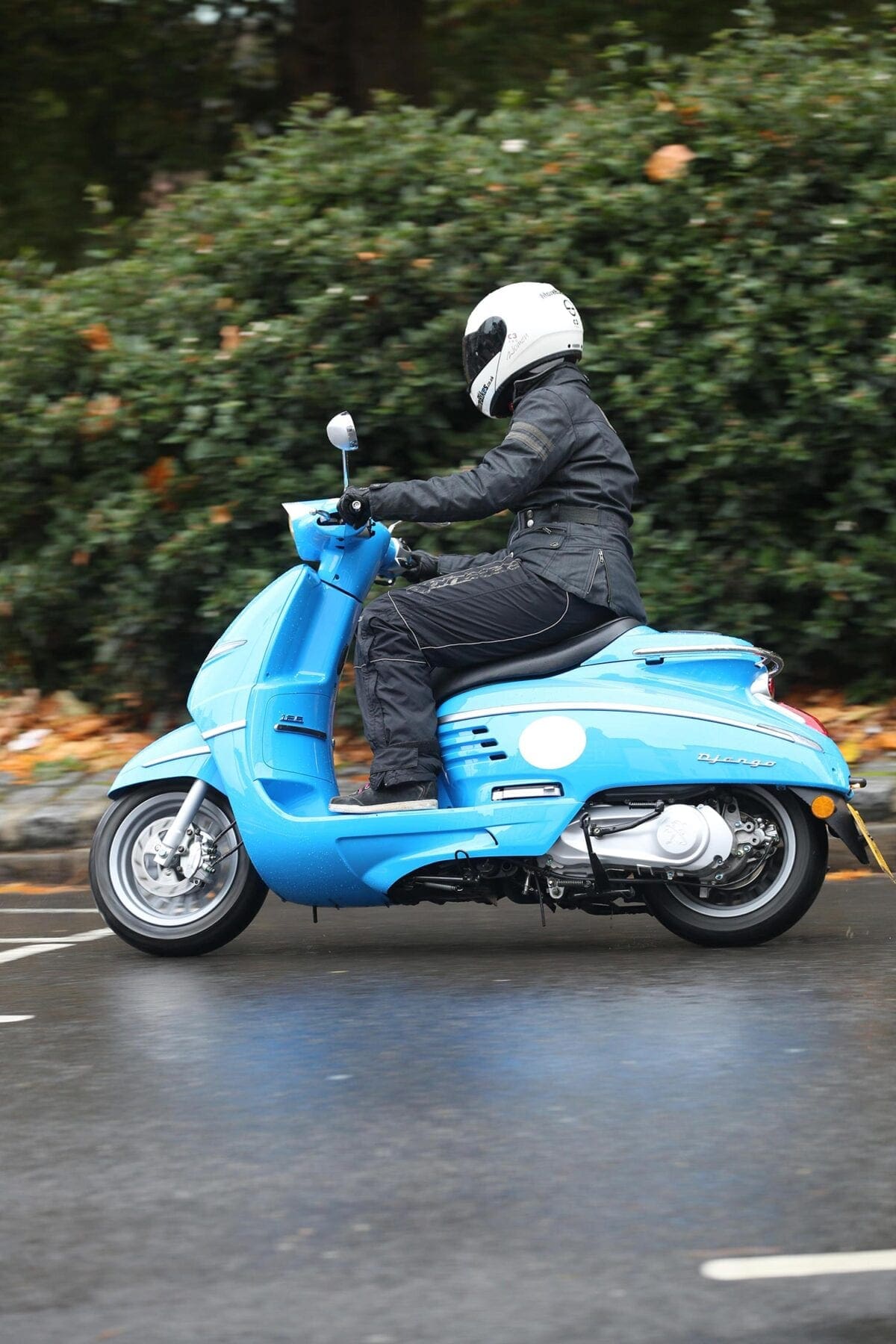 The 770mm seat is a comfortable height, making it easy to get your feet down – even for me at 5’6”. There’s plenty of legroom for a 125, and the little recesses in the leg shield will come in handy for riders with longer legs or bigger feet.

Fire it up by turning the key in the ignition and pressing the electric start, or if you’re a traditionalist, use the kickstart. The ignition barrel engages the steering lock, turns on the machine and also pops the seat, under which there’s storage for an open-face helmet and some smaller full-face lids – mine didn’t fit, so if it’s a big deciding factor for you then try it out at your local dealer. There’s more storage space in the leg shield, with two compartments for smaller items on either side which are opened by a key hole in the centre. One is just storage, whereas the other contains a 12V socket and a holder for your phone. 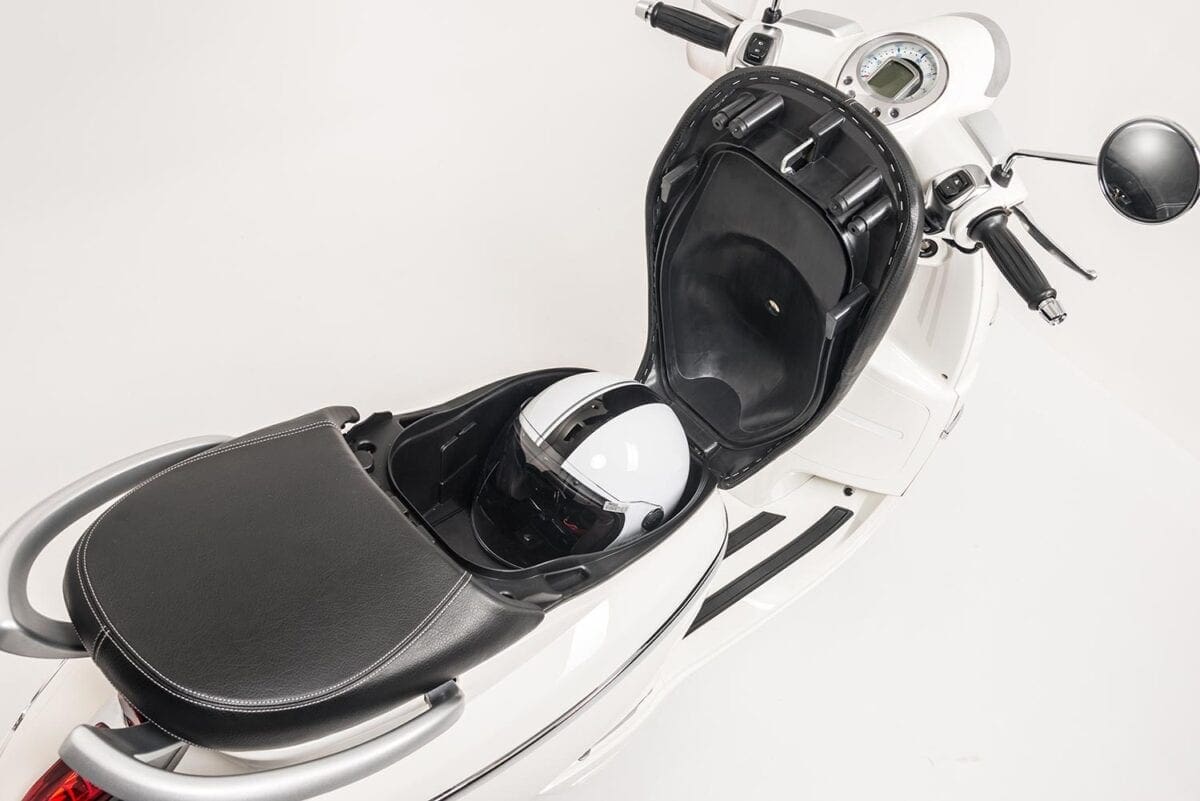 The dash is well stocked with information, giving you all the essentials and more. It’s clearly laid out and tells you your fuel level, the time, temperature, battery level, ice warning, odometer and of course your speed.

The Django is quick off the mark, and the 124.6cc engine will get you up to 60mph on more open roads. The punchy engine allows you to filter through traffic easily, and make the most of the narrow shape of the bodywork. The disc brakes on the front and rear are strong, and having ridden the Evasion and the Sport model, I can say that the SBC is confidence-inspiring. The test ride was wet, so it was a good chance to try out the brakes and I was impressed with their power but also the stability which was offered by the linked system.

The switchgear is nicely spaced out, though I found the indicator switch quite a stretch for my little hands. Still, it’s something you’d get used and I’m being very pernickety.

The Django is a well-specified, great looking machine, and well worth a test ride at your local dealer… 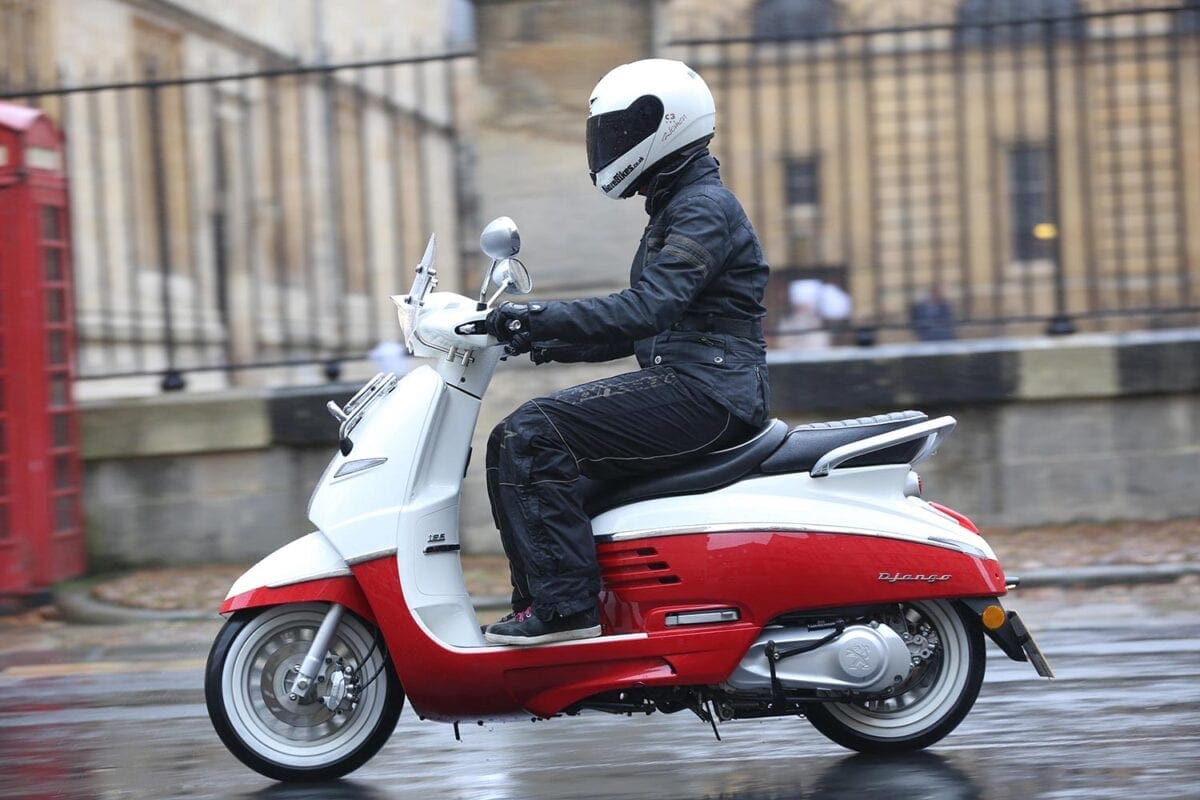 The new range of scooters is named after Jean ‘Django’ Reinhardt – a Belgian-born guitarist and composer of French nationality (January 1910-May 1953). Often regarded as one of the best guitar players of all time, he was credited with creating a new style of jazz guitar technique. His third and fourth fingers were paralyzed when he suffered burns in a fire, yet he continued to play using only the index and middle fingers of his left hand on his solos… 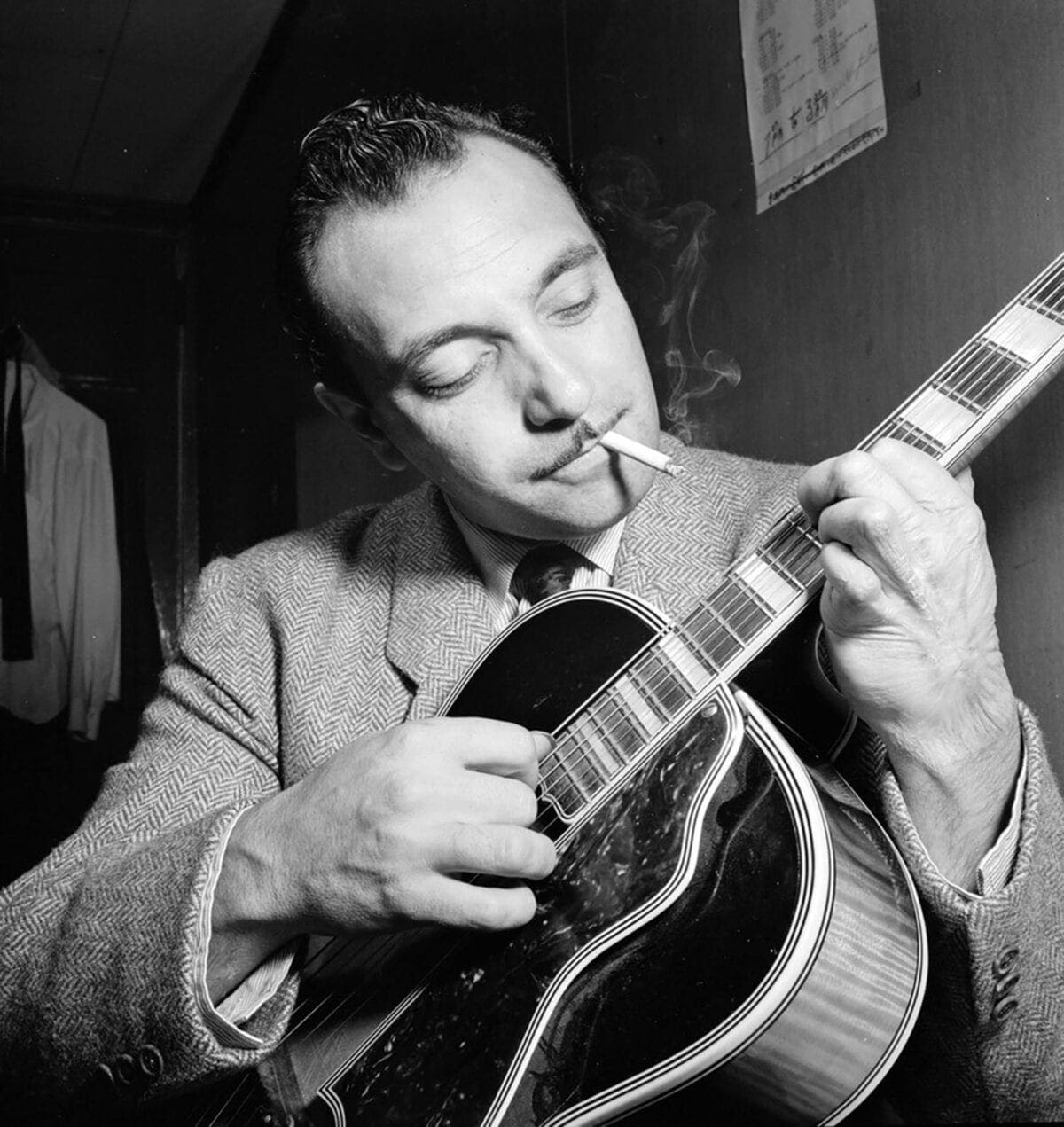