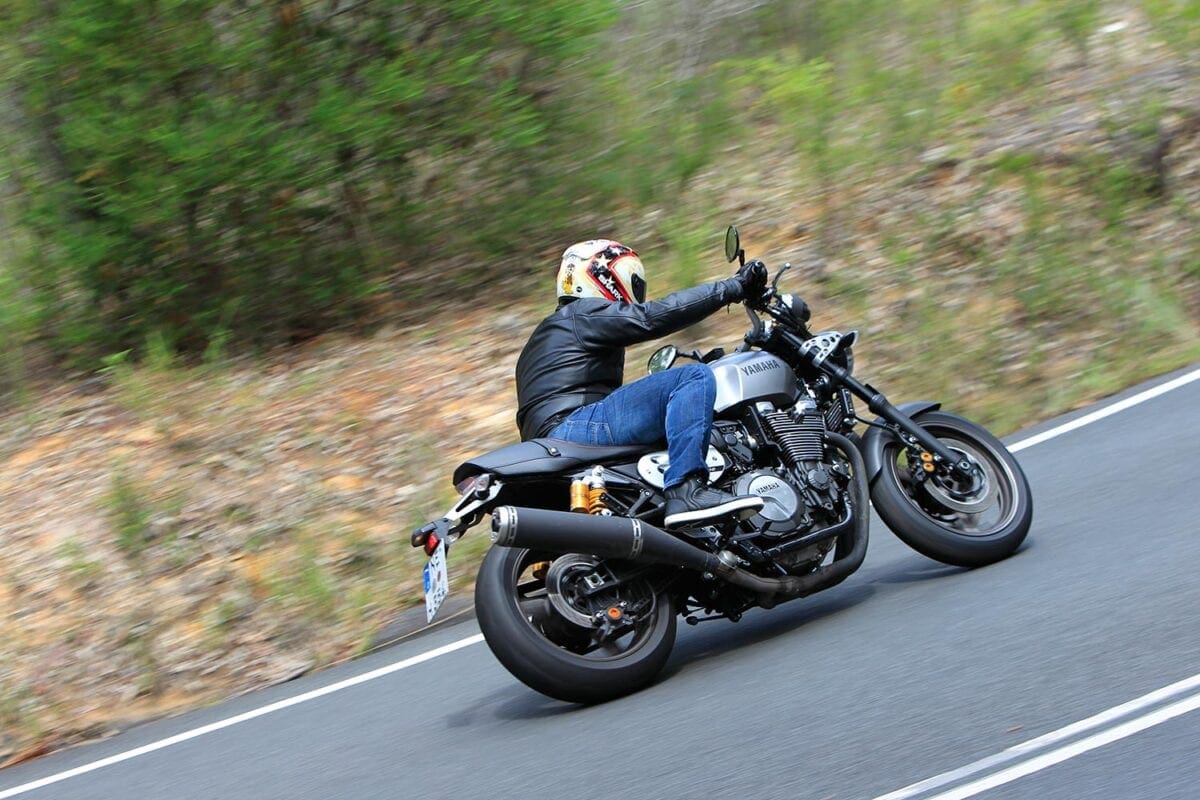 Big machines from years ago are all the rage these days, but Yamaha could never be accused of jumping on a bandwagon – the XJR1300 is now in its 20th year, so giving this air-cooled classic a revamp is a no-brainer. Redesigned as part of Yamaha’s Yard Built Project, the changes to the bike are effectively cosmetic: a new solo seat option, funky side-covers where number plates would go, new handlebars with three different options of bend, a blacked-out 4-2-1 exhaust and other tweaks for looks here and there. And a smaller fuel tank.

There are two versions of the new XJR available; the standard and Racer. The Racer gets a host of parts fitted by the dealer to change riding position and looks, at a £1000 premium. 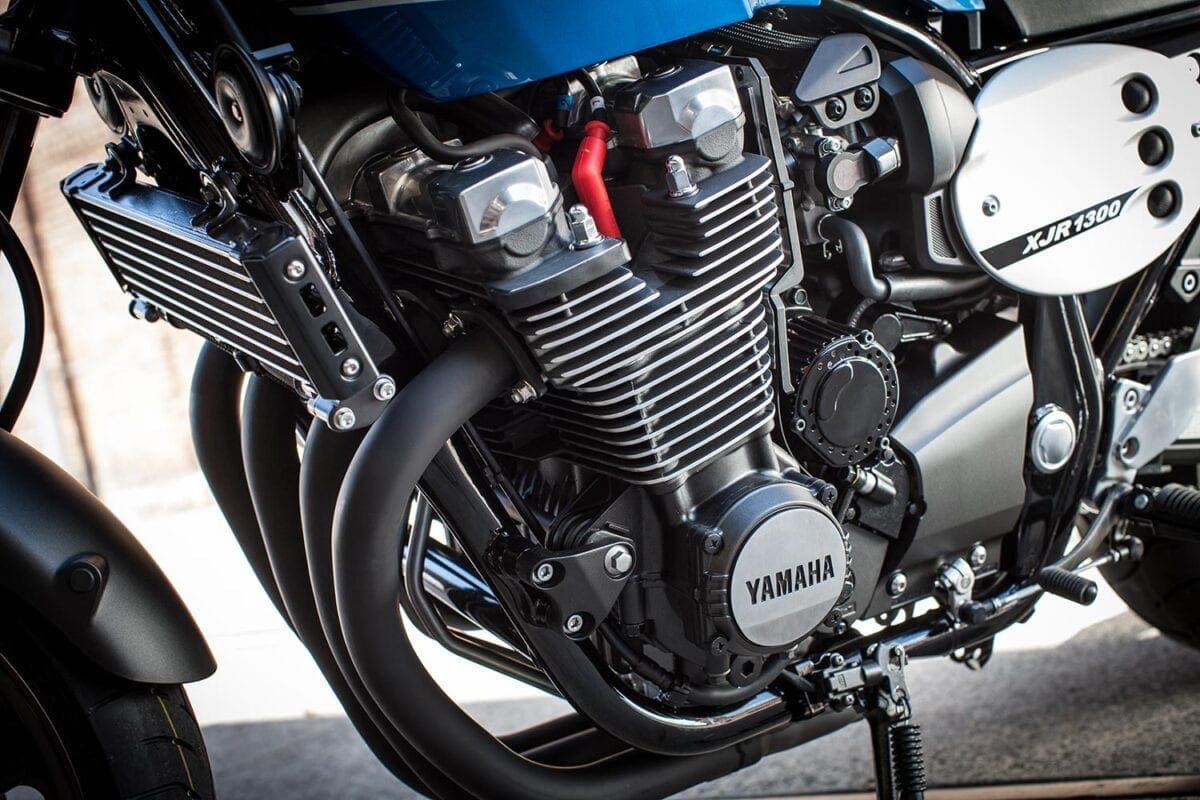 The motor is the familiar 1,251cc in-line four-cylinder Dual OverHead Cam unit making 98bhp @ 8,000rpm and 80lb-ft @ 6,000rpm. The same five-speed gearbox is still here, which needs stirring in tight corners as the torque doesn’t really start to flow until 4000rpm. That’s part of the pleasure of riding the bike for me, and once the tap’s on, the motor pulls smoothly all the way to 10,000rpm – as it has since the last fuelling upgrade in 2007.

The matt-black exhaust pipes of the 4-2-1 Akrapovic system are a nice cosmetic touch, and very ‘of the period’. The bike might sound a bit quiet for some – thanks to emission laws – but on the gas it still has a meaty howl.

As you’d expect from this air-cooled engine, a lot of heat comes off the cylinders; during low temperatures and soaking rain I used it to warm my hands for a few seconds when stopped at junctions. On a hot day, whilst on the move, you can’t feel the engine heat, but once you stop it’s a familiar presence. 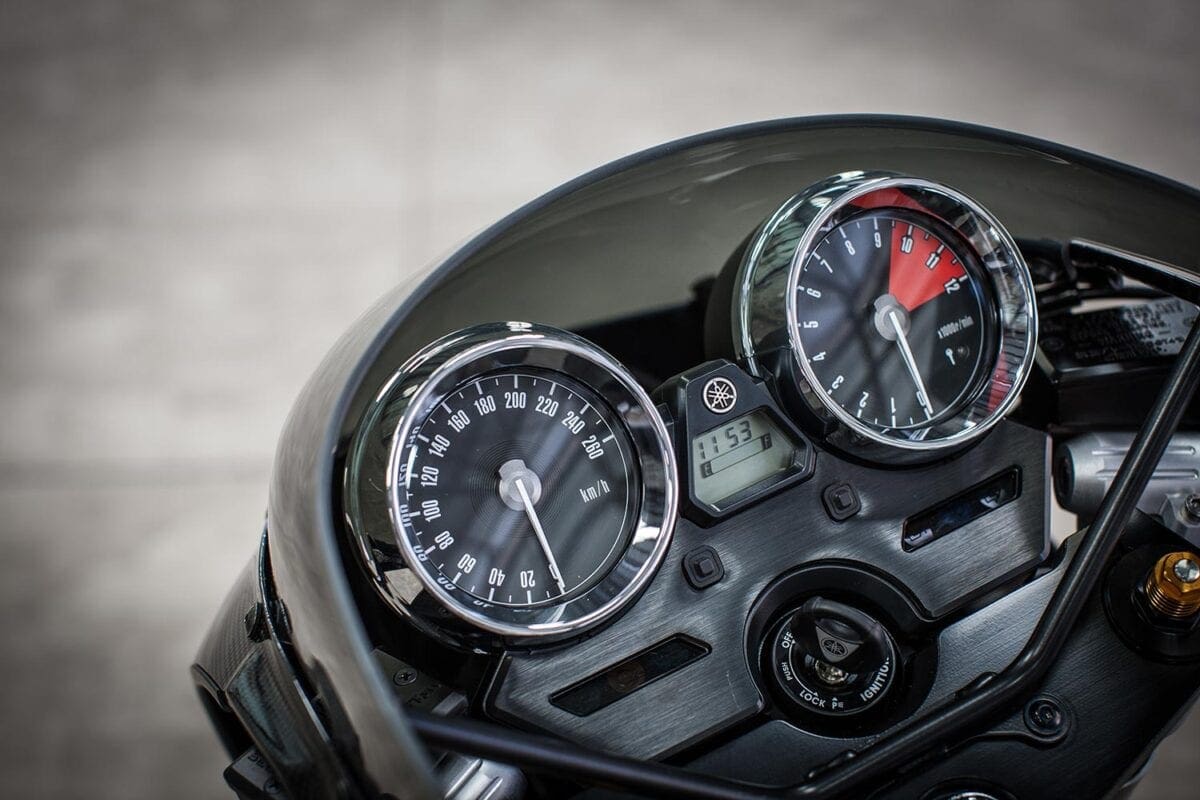 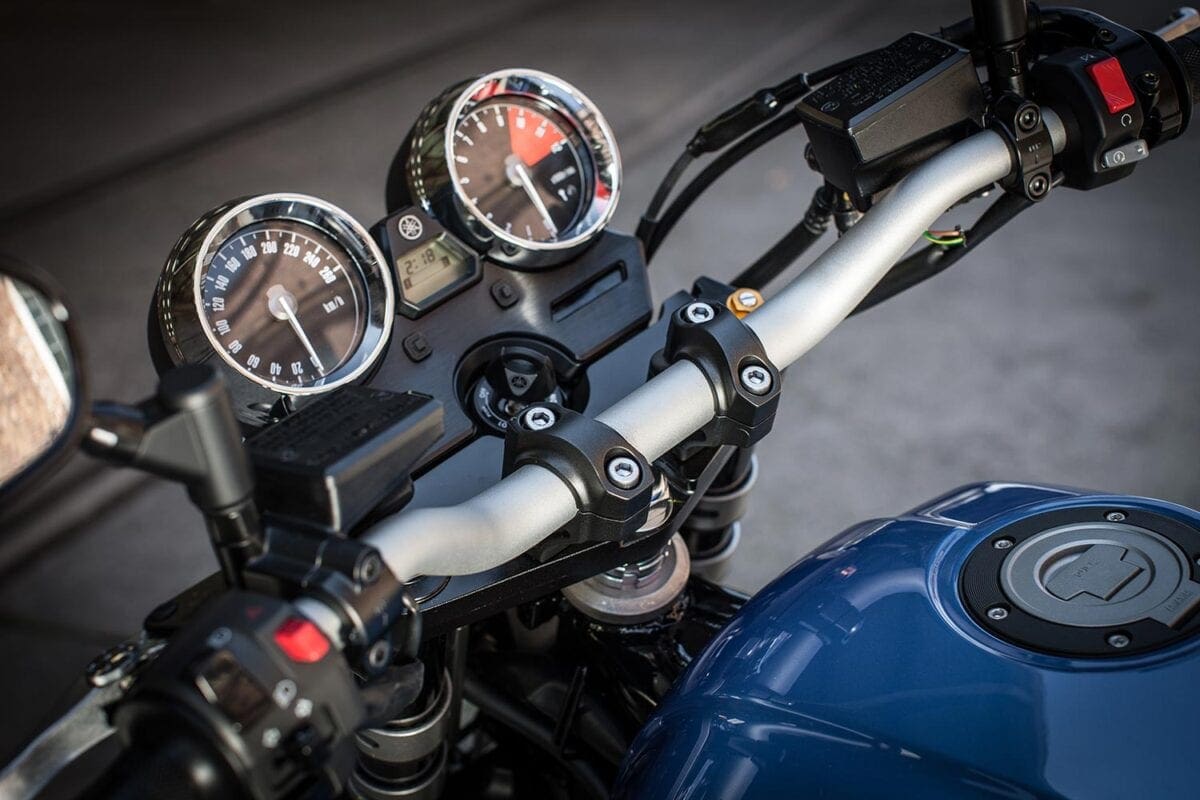 The frame is a very retro-looking, beautiful steel double-cradle, with a real charm to the conventional 38mm forks and twin Öhlins shocks.

Twin 298mm discs are bitten by two-piston calipers on the front (still those 1998 R1-style units that once got us so excited), with a 267mm disc and single two-piston caliper on the rear. The brakes are a joy, delivering instant grip in a useable way, though some riders may want to note that there’s no ABS 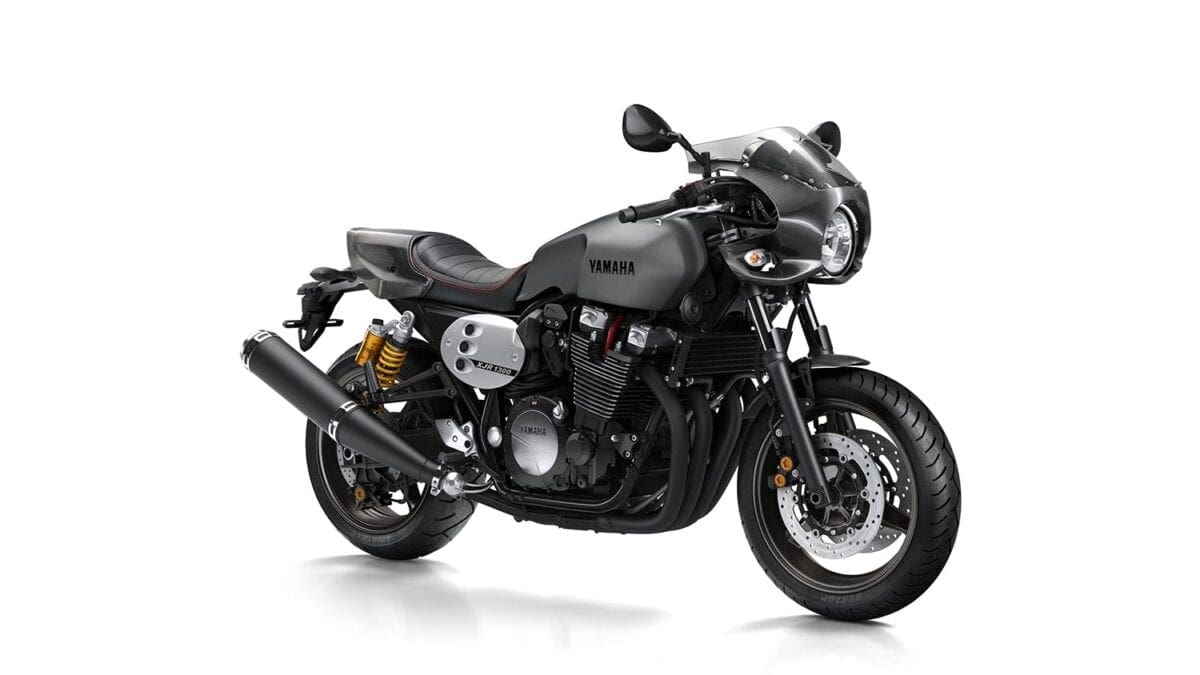 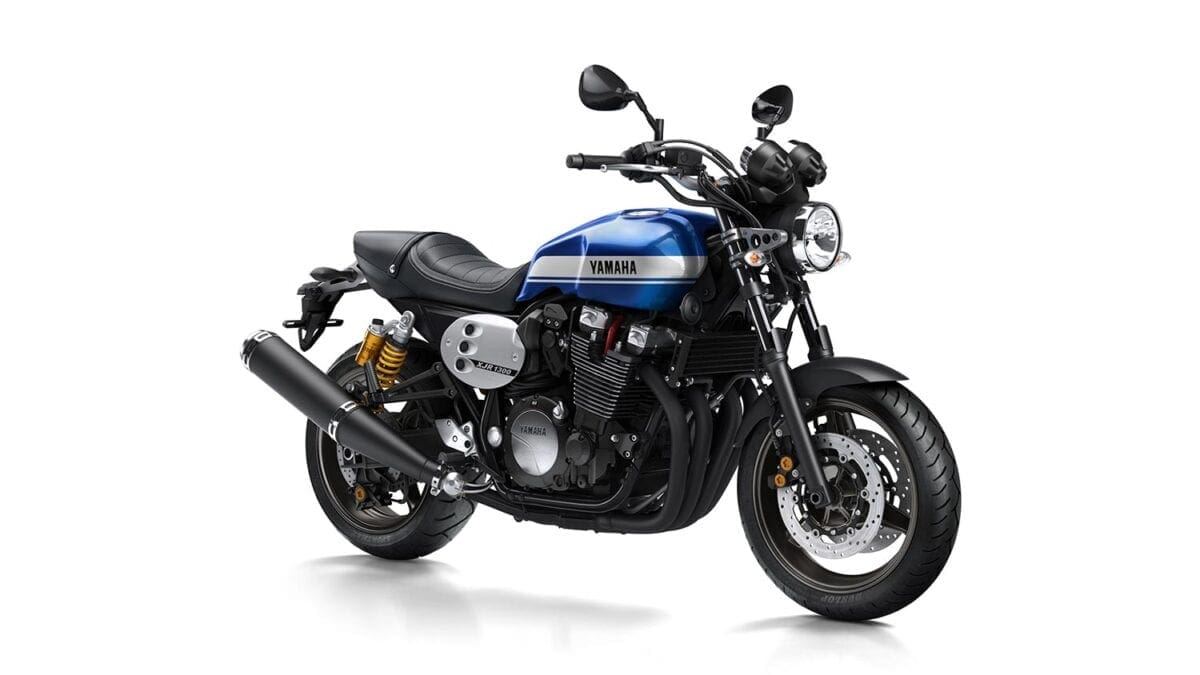 Riders of the new XJR are well catered for, with a sculpted 829mm seat, two analogue dials on the dash, and a small digital display for fuel and temperature info. Nice and simple.

Pillions aren’t quite as well looked after, with a smaller-than-before seat and a big bend required at the legs. You’re less likely to be doing big miles two-up, especially when you look at the new (plastic) tank; 14.5 litres, down from the previous model’s 21 litres means fuel stops could be an issue now. We reckon this bike will be good for around 120 miles – a hefty 50miles less than the outgoing model. 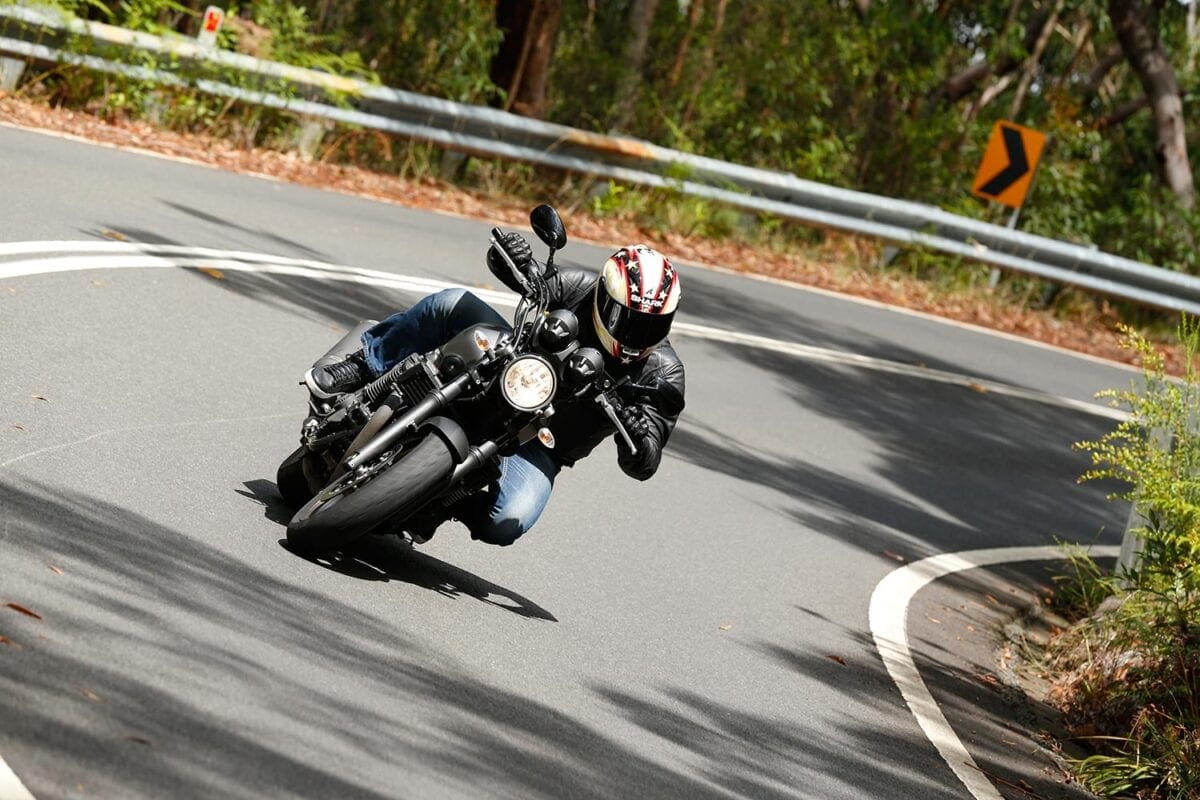 During the launch I rode both the standard and the Racer versions of the bike… it’s amazing how different a machine can feel with just fairly rudimentary changes to riding position. The café racer-styled machine pitches you much more forward and prone thanks to the clip-on handlebars. And whilst the riding position looks great – arguably it’s THE rider silhouette for this type of bike – it does put too much weight on your wrists. I managed about an hour on the bike before the odd shake of the arm came along to negate the numb wrist. The prone position does keep you out of any windblast at higher speeds, and getting really low on the XJR is easy, though the café racer fairing is so full of fittings you can’t easily see in front of you without hovering your head about five inches over the tank when properly tucked in. To be fair, it’s unlikely many riders of the 1300 Racer will be using it like this anyway.

On both versions of the bike, the seat is terrific; its narrowed-down profile and good support make the XJR a doddle to paddle around at standstill, and the set-up really lets you get hunkered-in to the bike in the corners. It’s a treat. 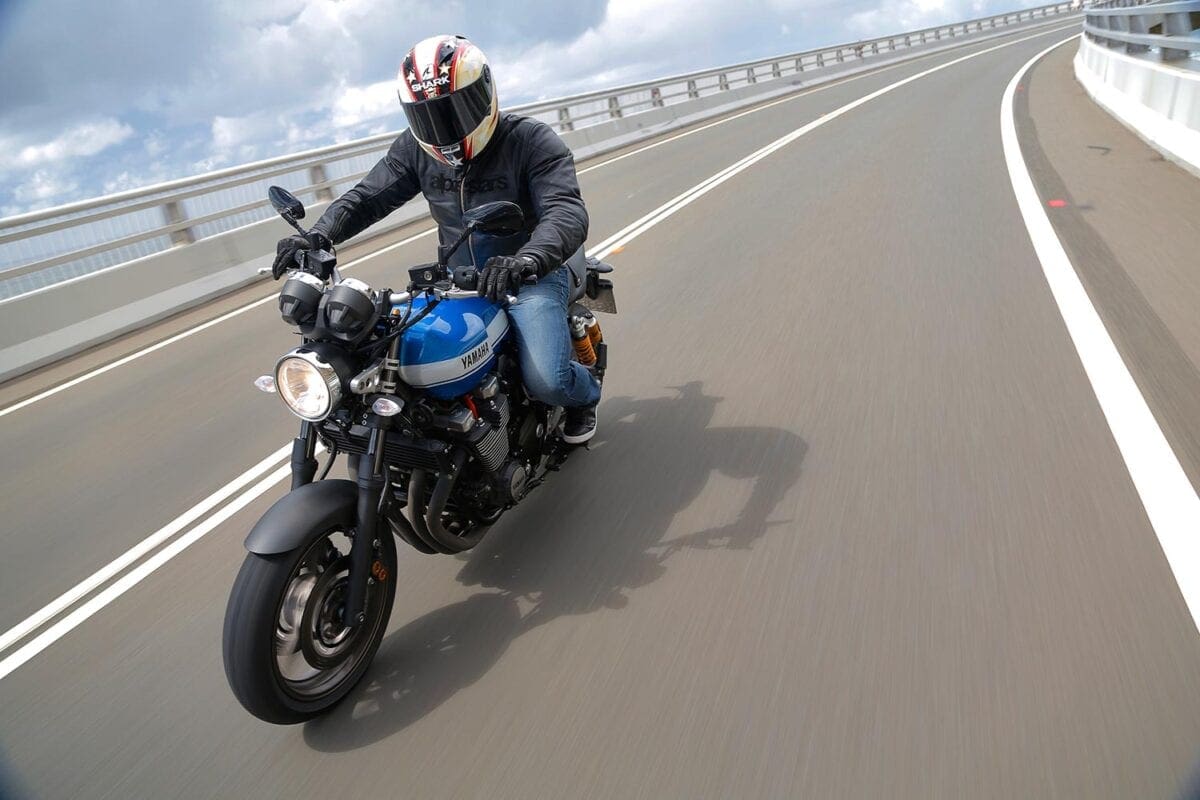 The suspension can feel a touch crude at times; cranked over in fourth gear for a long series of sweeping corners saw ripples and bumps in the road that the suspension was struggling with a bit, but the bike’s overall chassis is so well-refined that it shrugged off the pogo-in front-end and just rode through the issue straight and true.

The inherent easiness to the ride of the XJR makes it feel like it should be wallowy in the corners, but get into the twisties and the bike’s character really comes through – the XJR is terrific to turn in pretty hard whilst still on the brakes, sticking to the line easily. It’s a very forgiving machine.

The lack of ABS might worry the newer rider used to such affordable things on virtually every bike these days but if, like me, you’re of a certain age where you grew up on machines with decent brakes bereft of modern trickery then this is a welcome return. There’s plenty of feedback and feel from the stoppers, and while they can be locked, it’s all stable and under control.

After the recent Yamaha Tracer launch I said that it felt like Yamaha had its mojo back; that it was making motorcycles again that needed a rider to ride them. Yamahas used to be about being good at lots of things, but being best at complimenting the rider’s style and skill. And that stands true with the 1300. It’s a bike that has the look, the real heritage and the style. It’s got presence and attitude when needed. The XJR can not only walk the trendy line of fashion, but it can also go a few rounds on a Sunday morning with the sportsbikes. And all without the electronic bells and whistles of so many of today’s motorcycles. 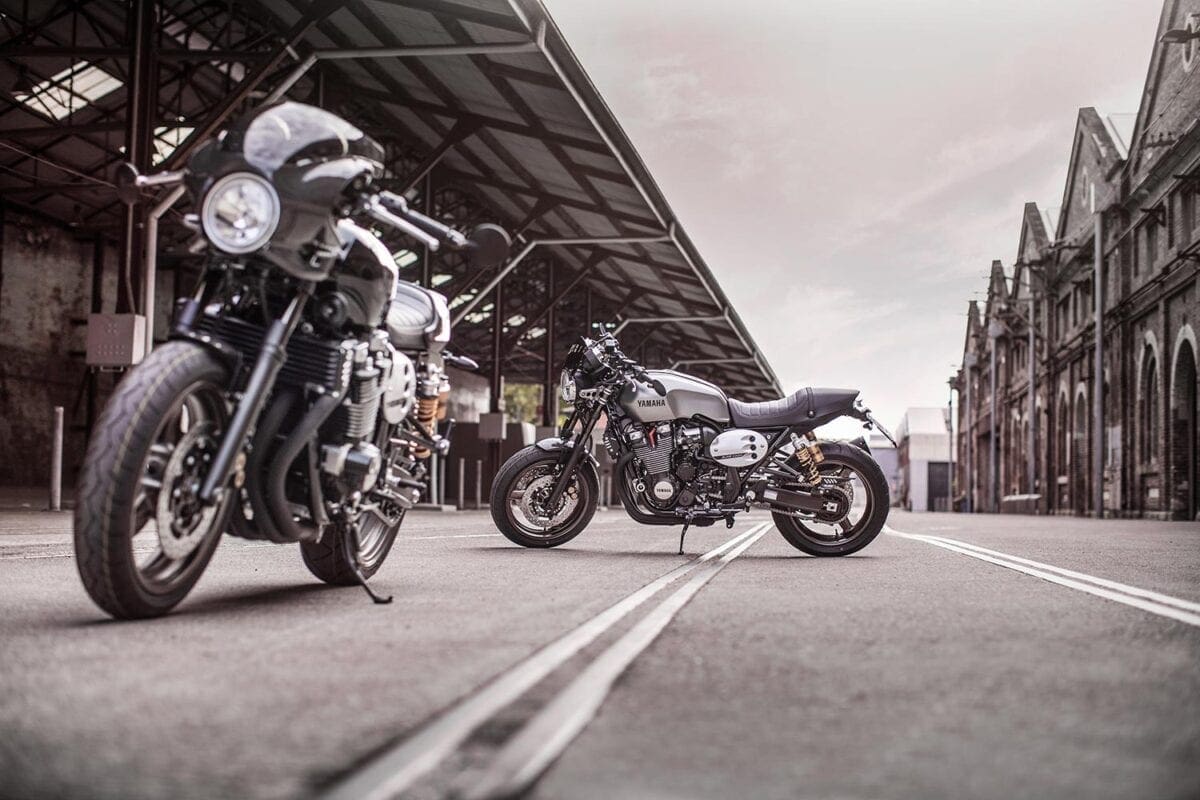