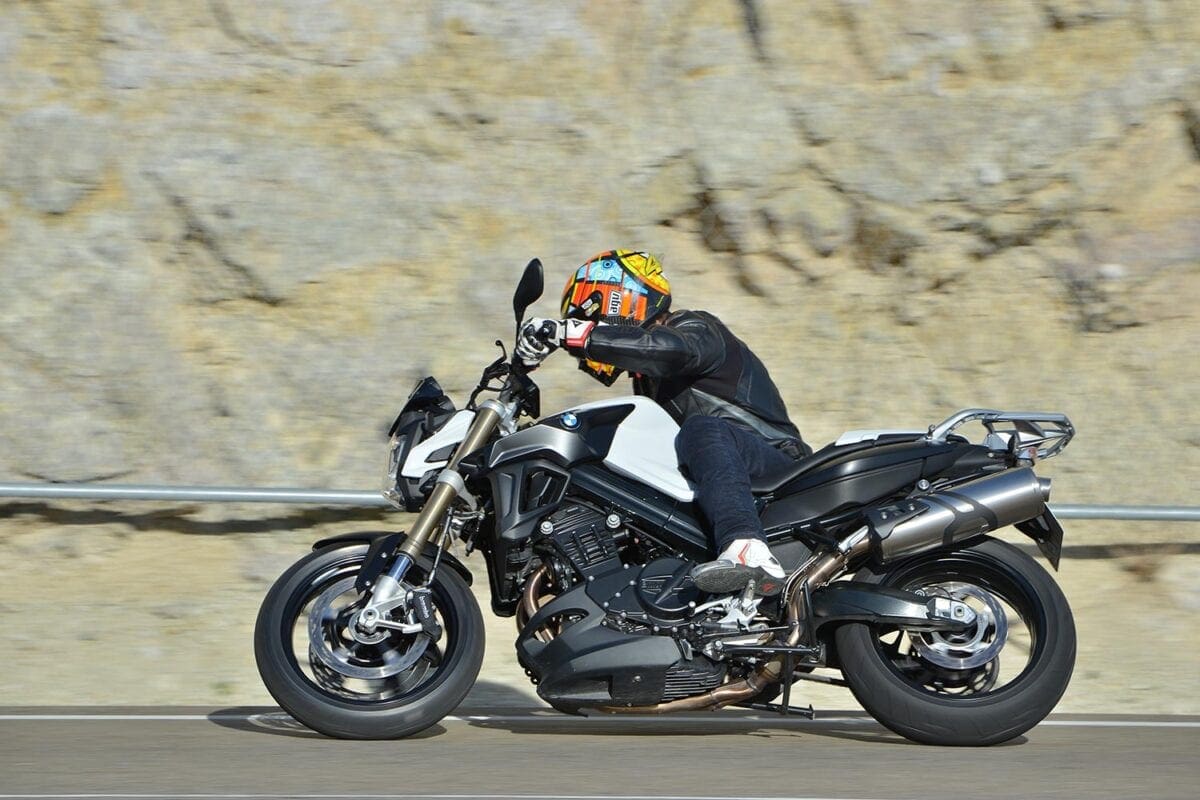 With the launch of the new BMW F 800 R, the German manufacturer has addressed the looks, ergonomics and technology of the previous model to create its next evolution; a machine the company says has ‘agility, everyday practicality and dynamic riding fun’… 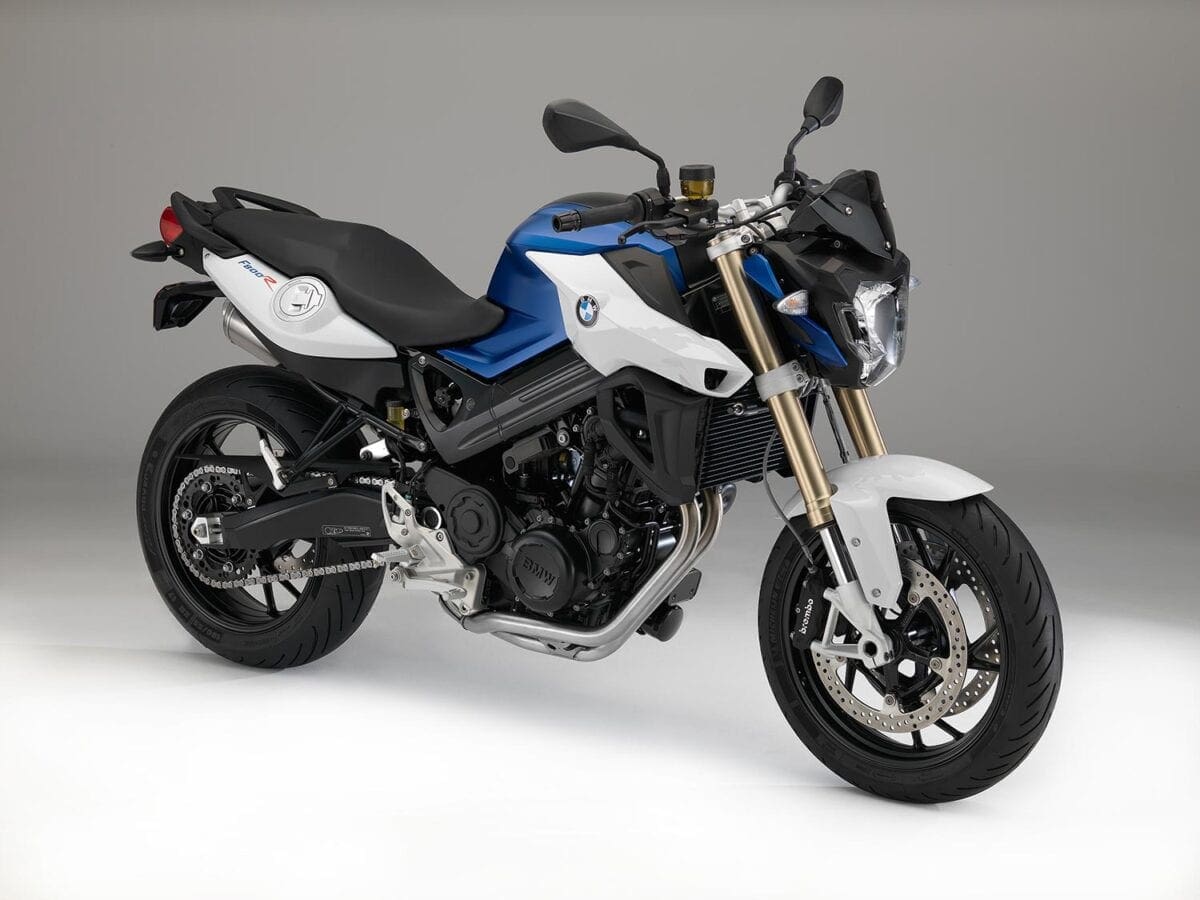 The liquid-cooled 798cc parallel-twin engine received no significant changes with the update, although output is up by 3bhp – through new mapping – to 90bhp @ 8000rpm. Good news for A2 licence holders, as BMW is offering a 48bhp option as a free downgrade. Torque remains the same at 63lb-ft @ 5800rpm.

As well as making the gearing shorter by dropping a tooth from the front sprocket, internal ratios have also been modified, with a new first and second gear. The clutch has been made to feel lighter at the lever, a nod too some riders that found it hard to engage. The exhaust is the same as on the old bike, but the optional krapovic system can add bark, bite and lop 1.7 kilos off in the process. 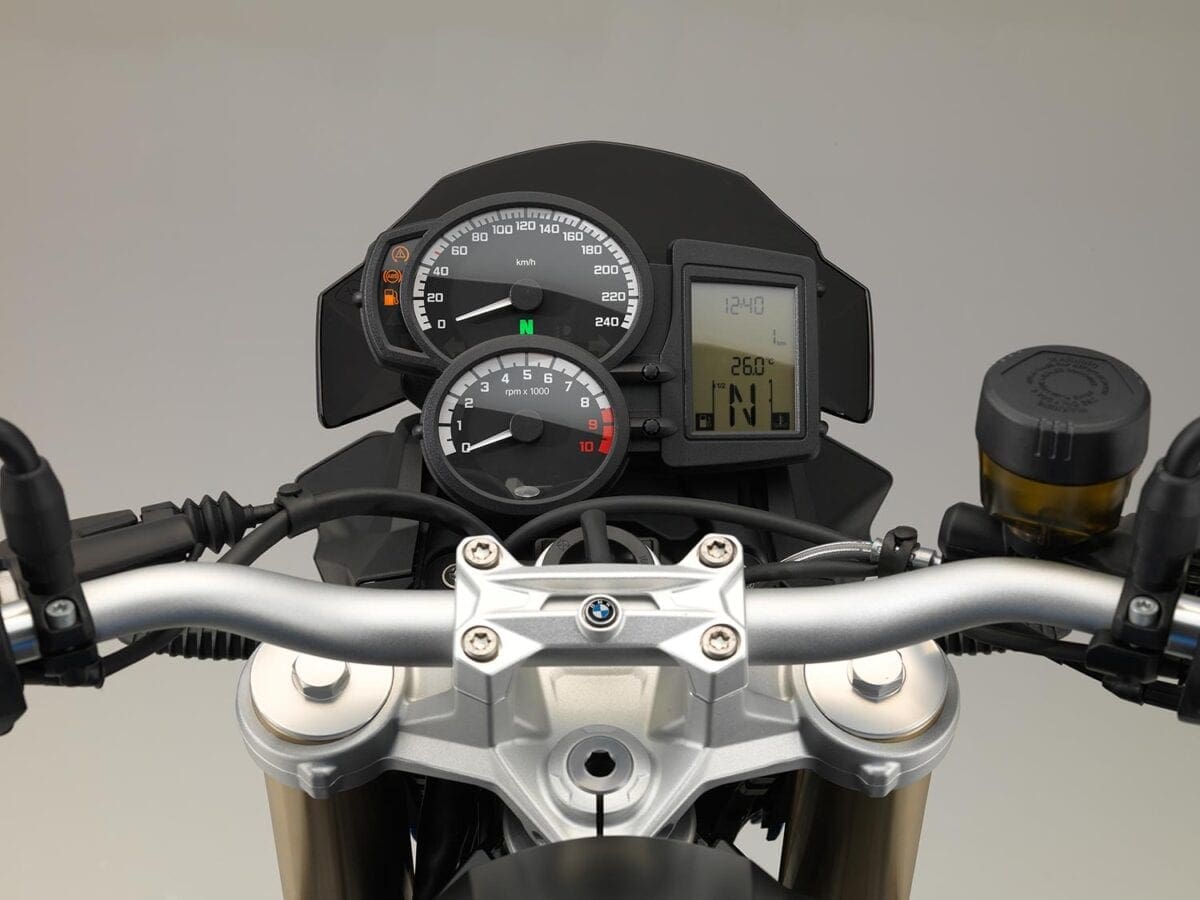 The frame and swingarm components have not changed from those on the previous model, but some of the bits added to them have. New aluminium handlebars offer a more relaxed stance on the bike, while the footpegs have been moved 10mm further forward, and 10mm lower.

Seat height has also been reduced by 10mm to 790mm, and there are two alternative seat options available – 770mm and 820mm. The R 1200 R’s suspension is now used, so an upside down unit replaces the old conventional ‘right-way-up’ forks. They aren’t adjustable, but the rear shock (with or without Electronic Suspension Adjustment) has adjustment for rebound and preload. New Brembo radial mount calipers have a two-channel ABS system as standard. 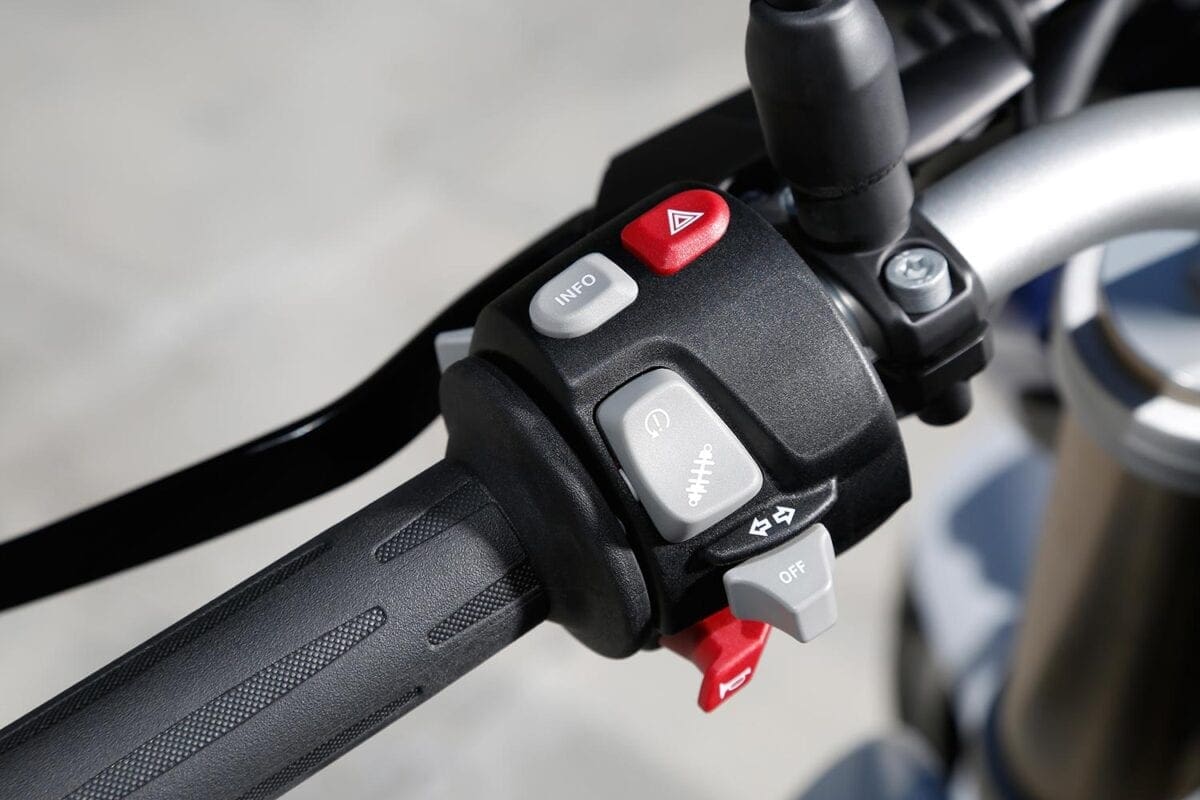 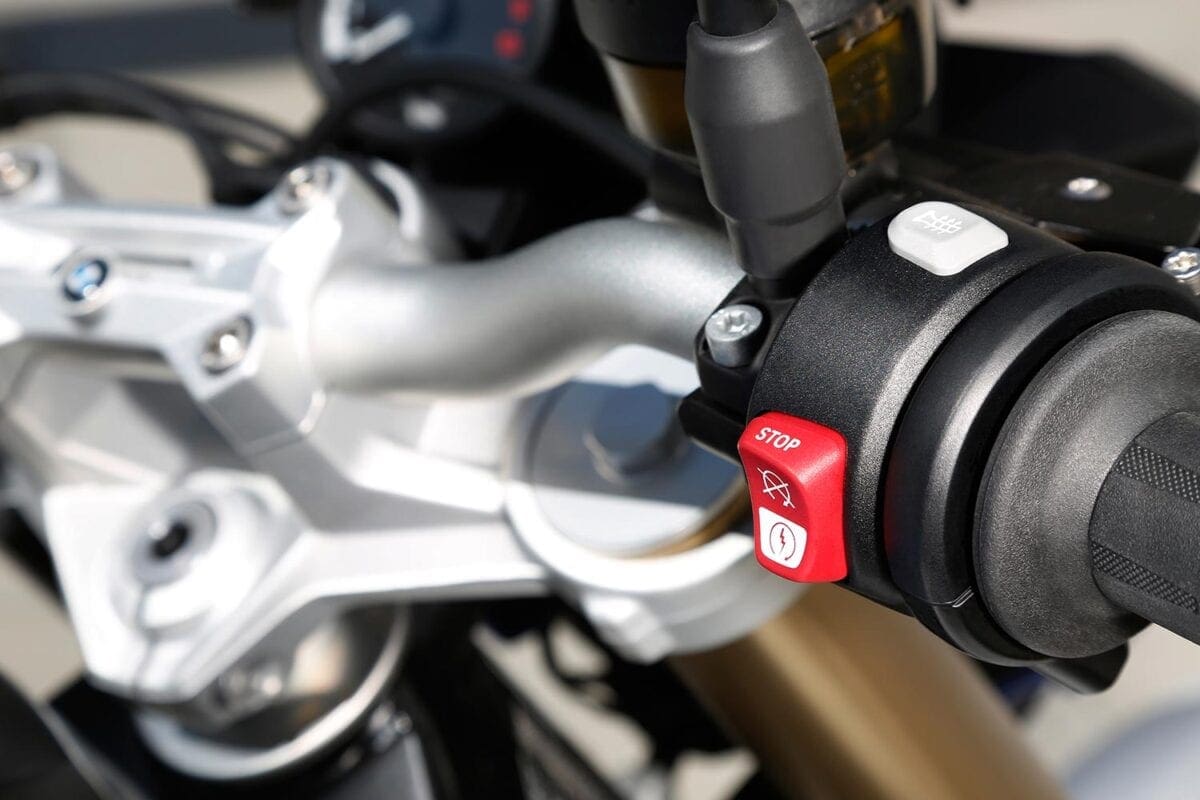 The bikes we rode were equipped with the entry level-ESA system, which changed the rear rebound settings electronically according to which of the three modes the bike was in – sport, normal or comfort. That’s not the only concession to modernity; the models we tested also had the Automatic Stability Control (ASC) traction control system fitted. As ever with BMW, the base bike is a blank canvas for you to add extras to – the ESA will set you back an extra £290, and the ASC traction control another £210.

The previous love-it-or-loathe-it headlight has been consigned to history, replaced by a unit that now conforms to what BMW designers think the public want. It’s said to work better at night too. Personally, I liked the old one, and think the new one looks at best a bit like the Suzuki B-King’s light, at worst the Inazuma. Other design touches include fresh cowls and covers, adding a frision of aggression in an otherwise friendly look. 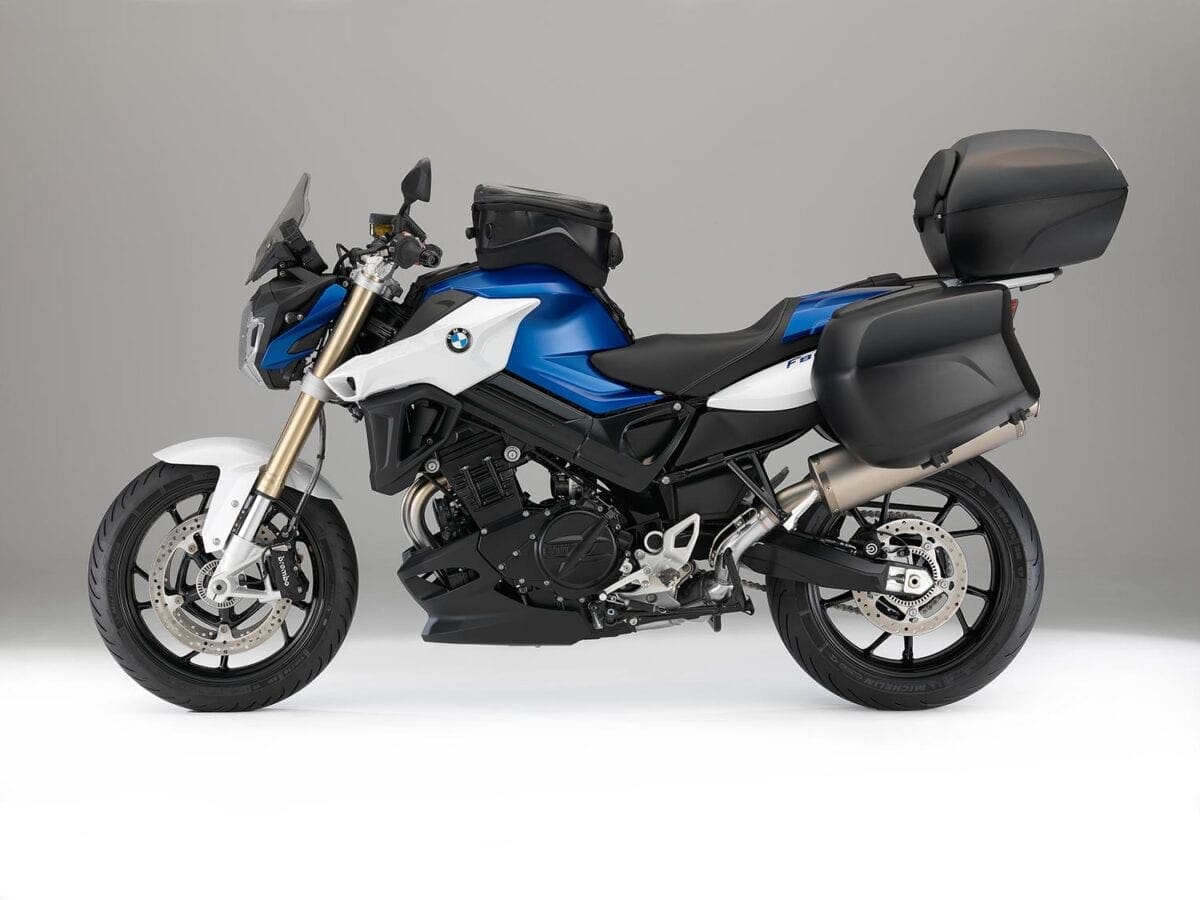 If you’re in the market for a middleweight naked machine, then the BMW F 800 R may be a good choice. There are plenty of rivals, and when faced with the sportier and character-filled MT-09, Street Triple, Z800 or the cheaper, simpler and friendlier MT-07 or ER-6F, it’s a competitive market-place that will leave the final decision down to personal rider choice.

BMW has erred on the side of manners rather than mayhem – which for many riders is a pro – although if you want to go looking for trouble, then the F 800 R is capable of finding it.

Of course, being a BMW, the machine has plenty of accessories and optional extras to consider. The comfort pack adds the on-board computer, heated grips, pannier mountings and a centre stand, while the Dynamic package gives you LED indicators, LED tail light, engine spoiler and pillion seat cover. 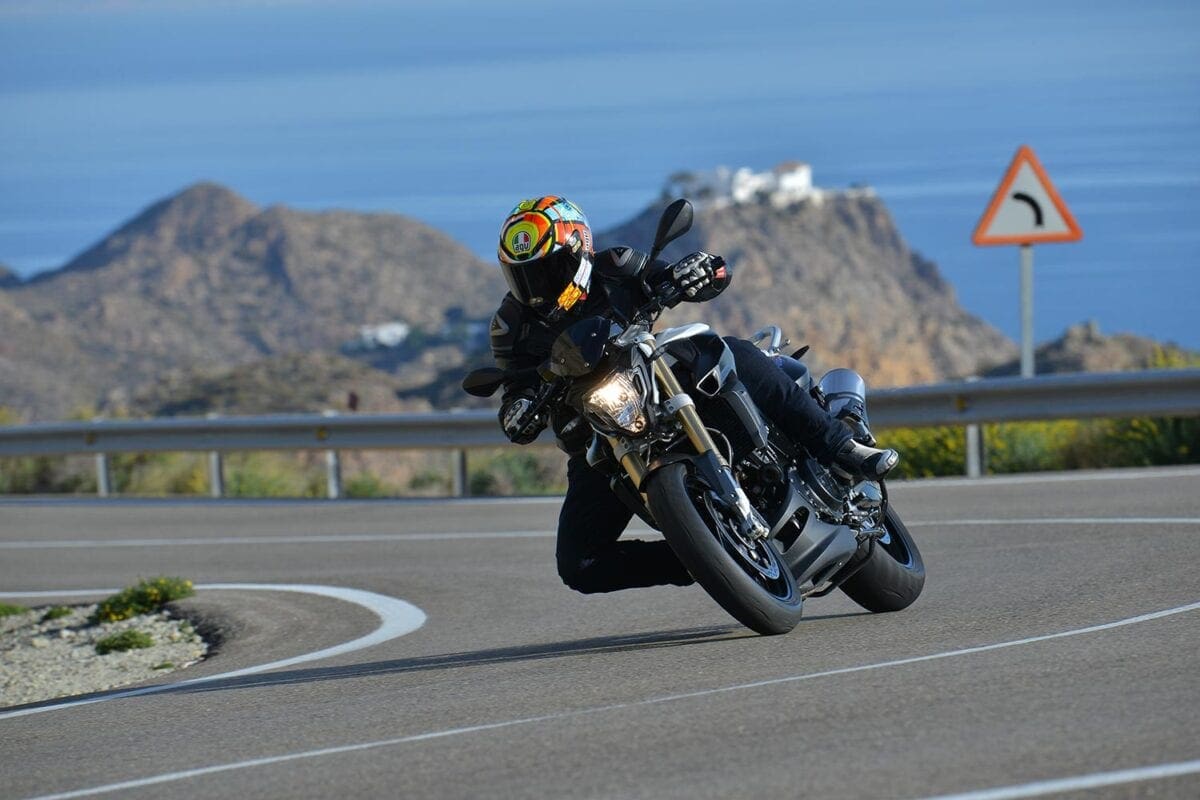 Very capable, if tearing around the hills of Almeria for 200 miles was anything to go by. The launch ramped up speed and challenges as the day progressed, so a gentle ride along the coast highlighted how easy the F 800 R is to use. The parallel-twin motor doesn’t shake its indignance at low speeds in the wrong gear, offering enough pull at low revs to satisfy even the laziest of riders.

The revised ergonomics work, too. Making the bars straighter and offering more legroom makes the bike more intuitive than before, and its balance is excellent. BMW offers an A2 version of the F 800 R, and what with a decent turning circle it’ll make mincemeat of any coned configuration.

So far, so good. But surely the escape from the coast to the hills would see the 798cc parallel twin suffer, especially as there are only 8,500 revs and a claimed 90bhp to play with. Well, what the motor lacks in character it makes up for in sincere enthusiasm. It offers linear power delivery, with only a small boost at around 6,000rpm, so there’s plenty of flexibility on offer. The supposed small rev range, however, actually incorporates plenty of shove. You’re not feeding it gears constantly; in the confined environment of Spain’s open spaces, it can push you out of a corner at 3,000rpm and get you to the next 5,000 revs later without swapping ratios. 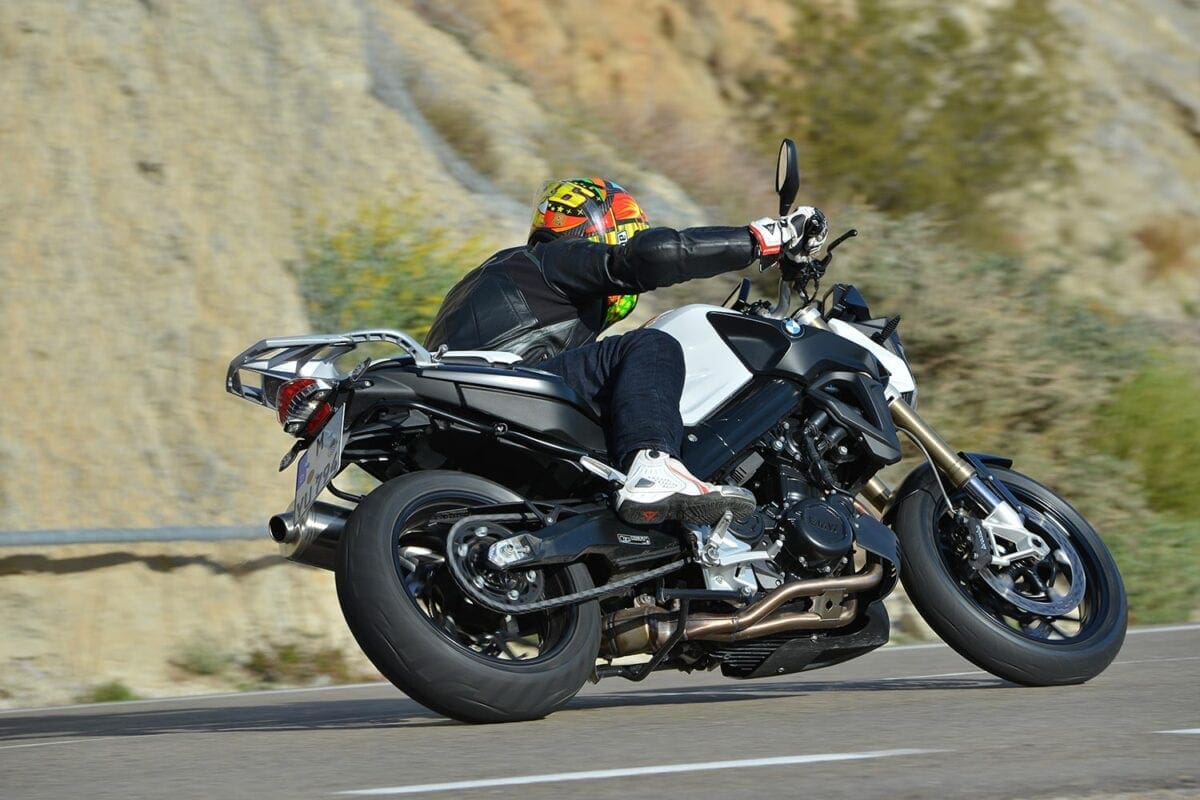 While the extra 3bhp is not really noticeable, the improvements made to the bike’s suspension are stark. The front now offers plenty of support, and though the forks are unadjustable on economic grounds, the settings mean the front doesn’t capitulate at the first sign of a cornering encounter. Shod with Metzeler Z8 Interact tyres, it was only at race-track levels of lean that the communication with the road turned into the corridor of uncertainty.

The rear’s ESA also has a palpable effect, although I only felt it jumping from Sport to comfort, not noticing the single step to or from normal. The F 800 R’s electronics didn’t intervene at any point, with the ASC traction aid and ABS unemployed, other than when cajoling it into action.

We slipped onto the motorway for a few miles, where even at very high speeds there were no notable vibes thanks to the additional conrod to balance the motor. For a few miles I flicked through the controls, noting that the bike had achieved 50mpg – impressively economical on such a throttle-heavy journey.

The new bike’s better, more controlled, with extra power and a less divisive look, adding to the brilliant choices already available in this market. 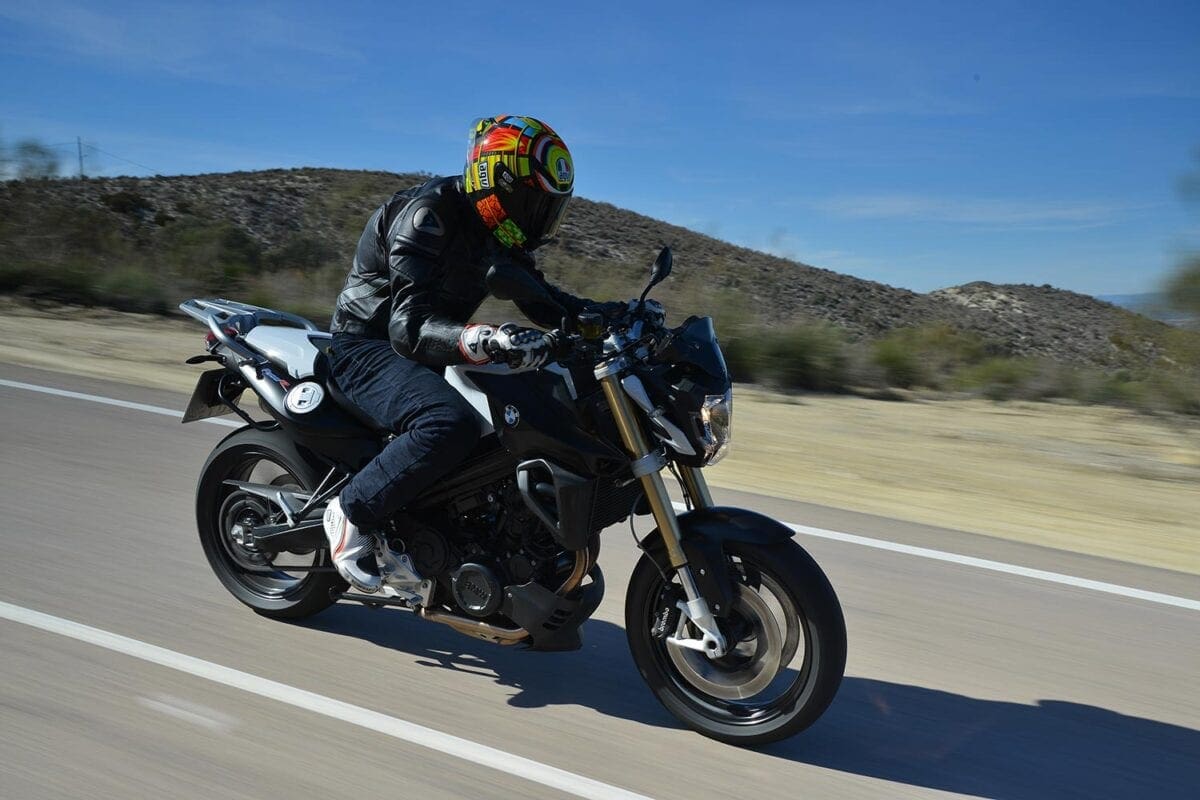