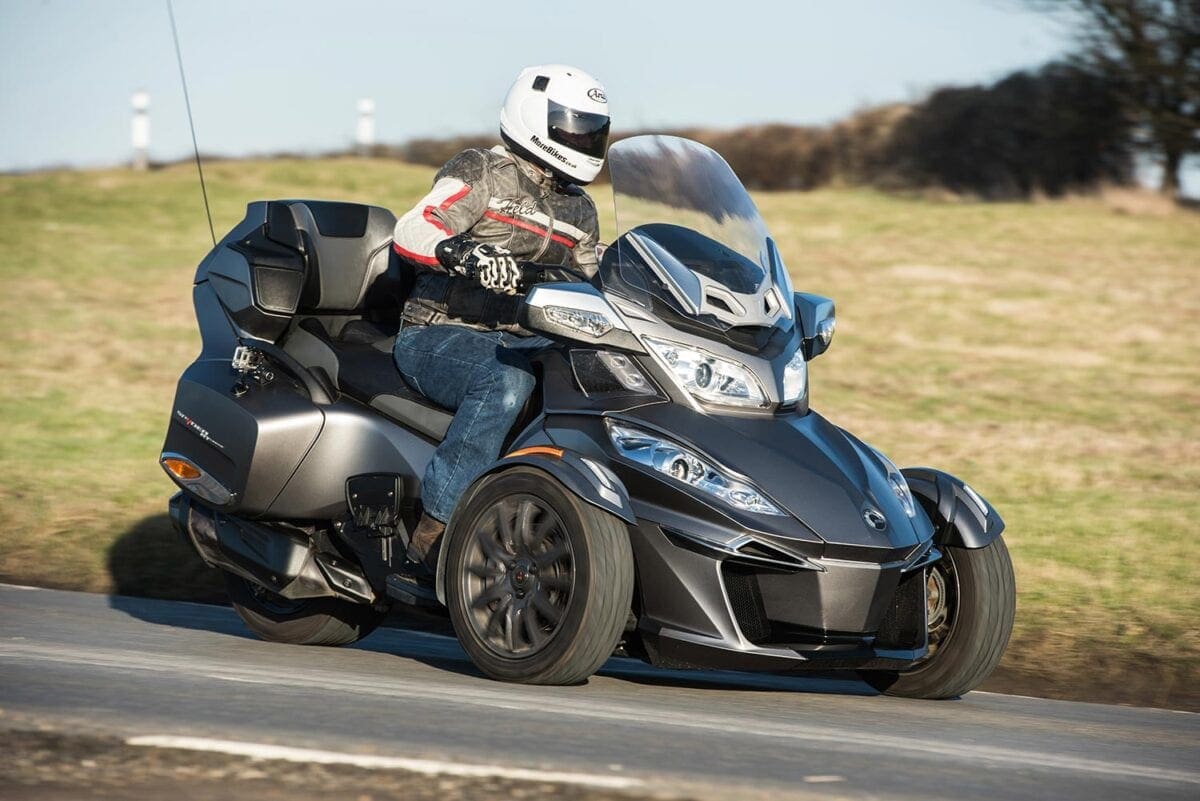 “I don’t get it,” has been the most common response when I’ve turned up at my mates’ homes on the Spyder. “Why would you want that?” and “You might as well have a car” usually soon followed. It’s easy to dismiss this three-wheeled tourer, but ride one long enough and it starts to make a lot of sense… 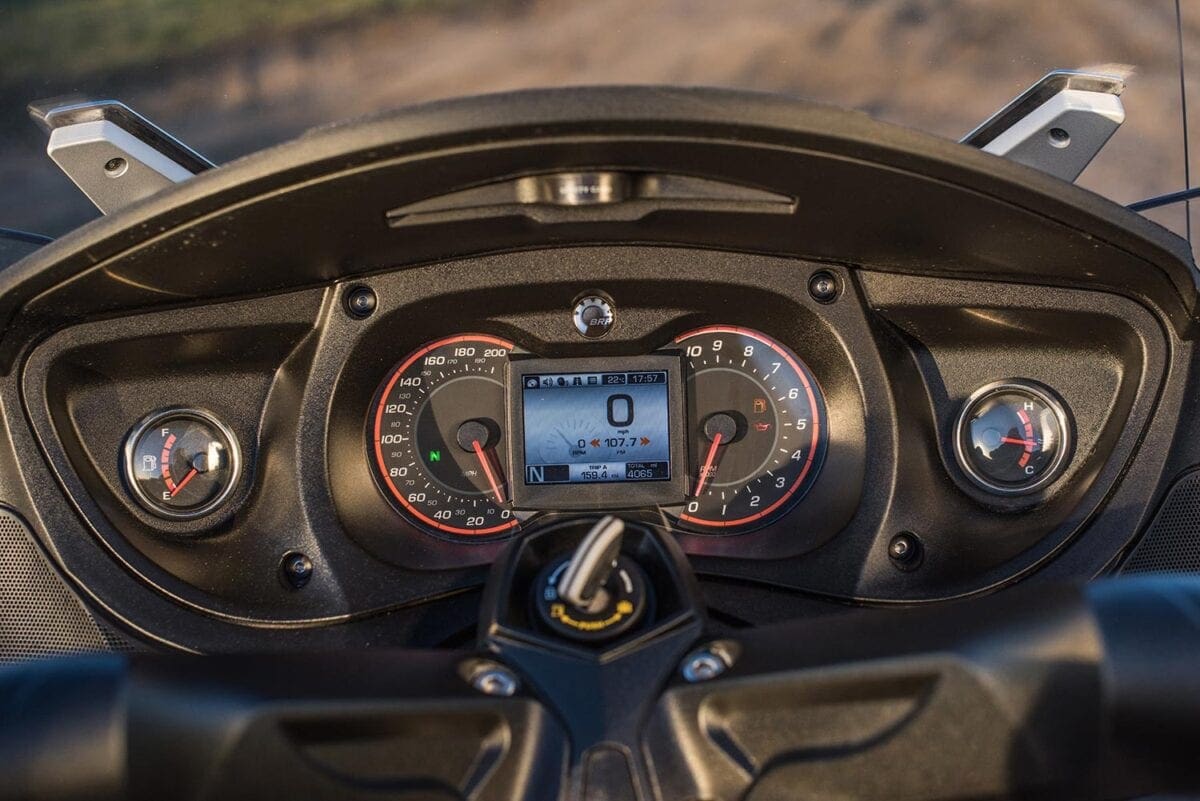 Bombadier Recreational Products (BRP), the Canadian company also behind Can-Am, Ski-Doo, Sea-Doo and more also owns engine manufacturer Rotax. The 1330cc ACE engine is built in Austria and makes a healthy 115bhp and 96lb-ft of torque. What this actually means is that from around 2500 to 5000rpm, the RT-S has grunty, muscle-car performance. From 5000 to the redline just past 8000rpm, it goes like a supercar.

The fuel-injected motor uses ride-by-wire to link the throttle, which also comes with cruise control as standard, fed by a 26 litre tank.

The six-speed transmission is a semi-auto ‘box, with easy-to-reach paddles on the left bar – press forward to go up a gear, and pull back to go down. When decelerating, the gearbox automatically changes down, ensuring you’re always in the correct gear to pull away smoothly and quickly. The system won’t let you change up if the revs are too low, and at a standstill, hold the large ‘R’ button on the left switchgear, then tap the paddle backwards to drop into reverse. 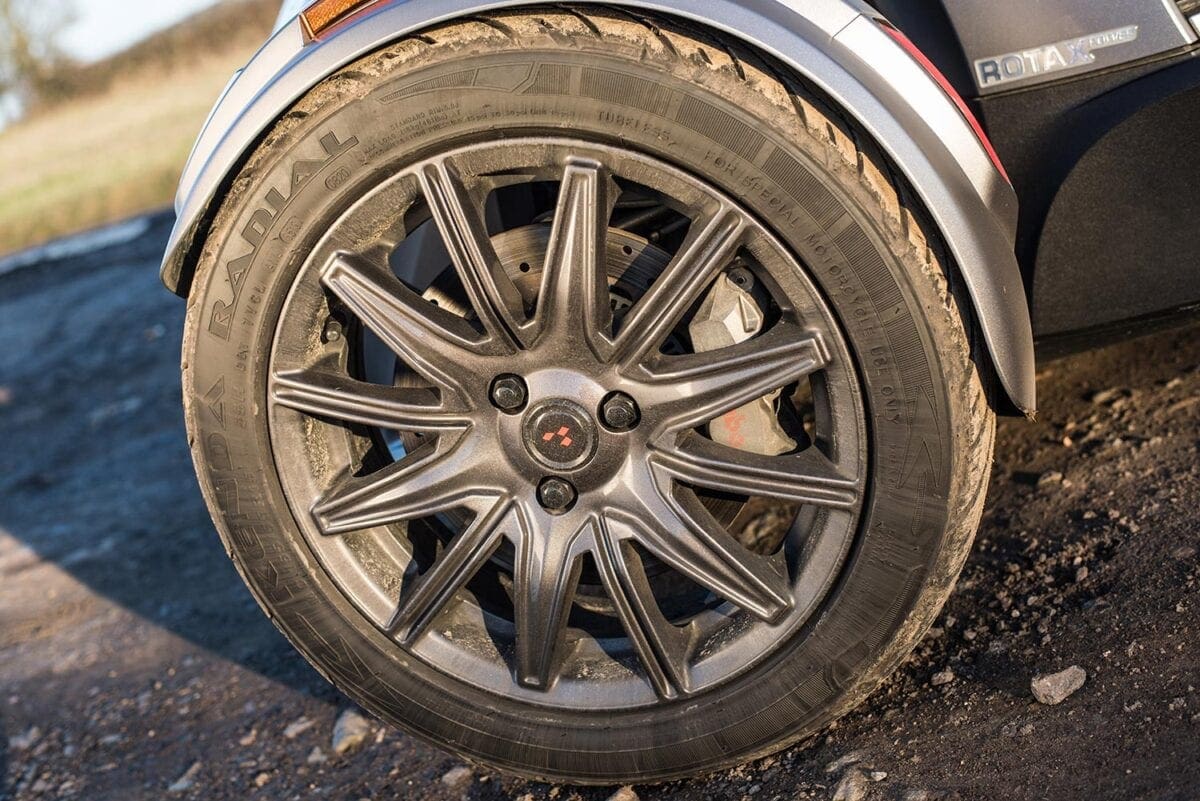 This is the ‘S’ version of the touring Spyder – the standard RT features traction control, stability control and ABS, while the S gains electronically-adjustable rear air suspension – a simple button on the centre console allows you to firm or soften it.

With a kerb weight of around 470kg, the brakes have their work cut out, but a pair of Brembo four-piston calipers bite 270mm discs on the front, with a single-piston Brembo on another 270mm rear disc. Coupled with the ABS and large contact patch of the 15×5 inch front and 15×7 inch rear wheels, the set-up has no problem hauling the Spyder to a stop. The 165/55 R15 and 225/50 R15 Kendas look like car tyres, but are ‘For special motorcycle use only’.

The stability control system helps to prevent the Can-Am from tipping over in hard corners – push hard in the dry and as the front double A-arms and Sachs shocks reach opposite extremes of travel, the engine’s power is cut. This, combined with the traction control keeps the Spyder settled – the TC light often flashes, particularly when leaving wet roundabouts at speed, though you’re rarely aware of it interfering with the fuelling. If anything, I’d have liked to have seen a more aggressive ‘Rain’ mode – while it’s fun to step the back of the machine out at low speed, very wet roundabouts can sometimes be a little disconcerting if you’re hustling. Having said that, this isn’t the type of bike that would normally be ridden hard, and only when ‘exploring the possibilities’ does the Can-Am start to lose traction. 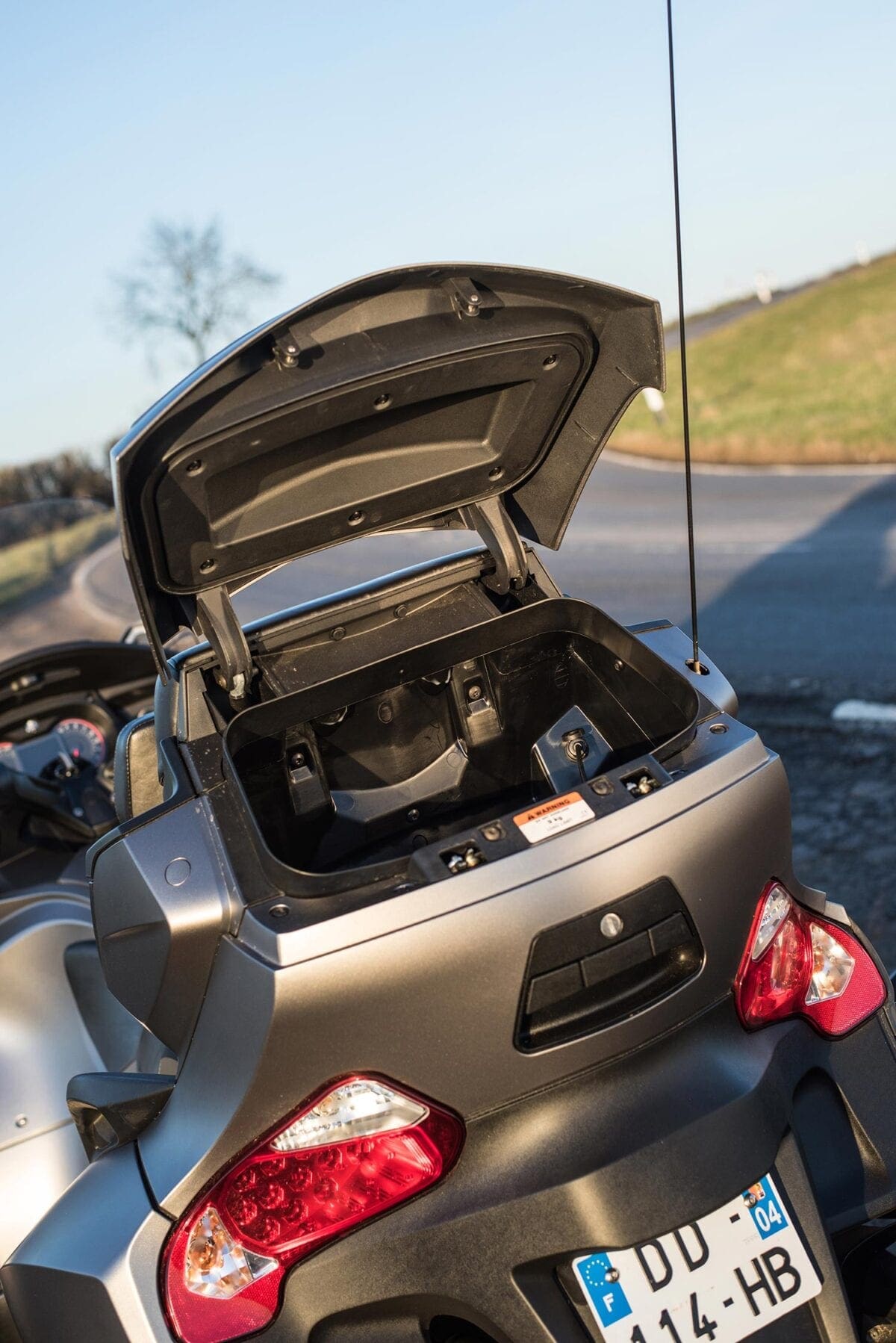 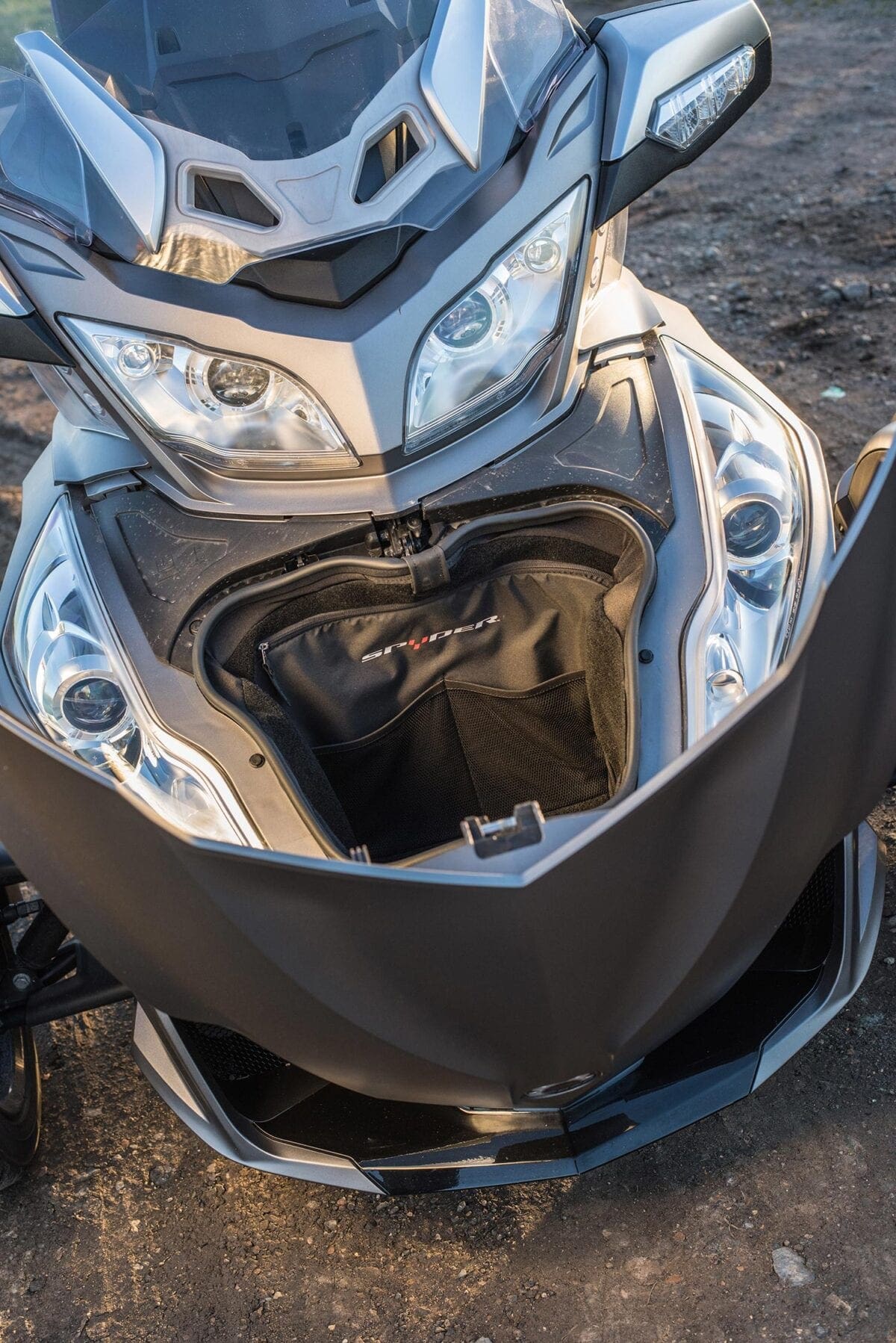 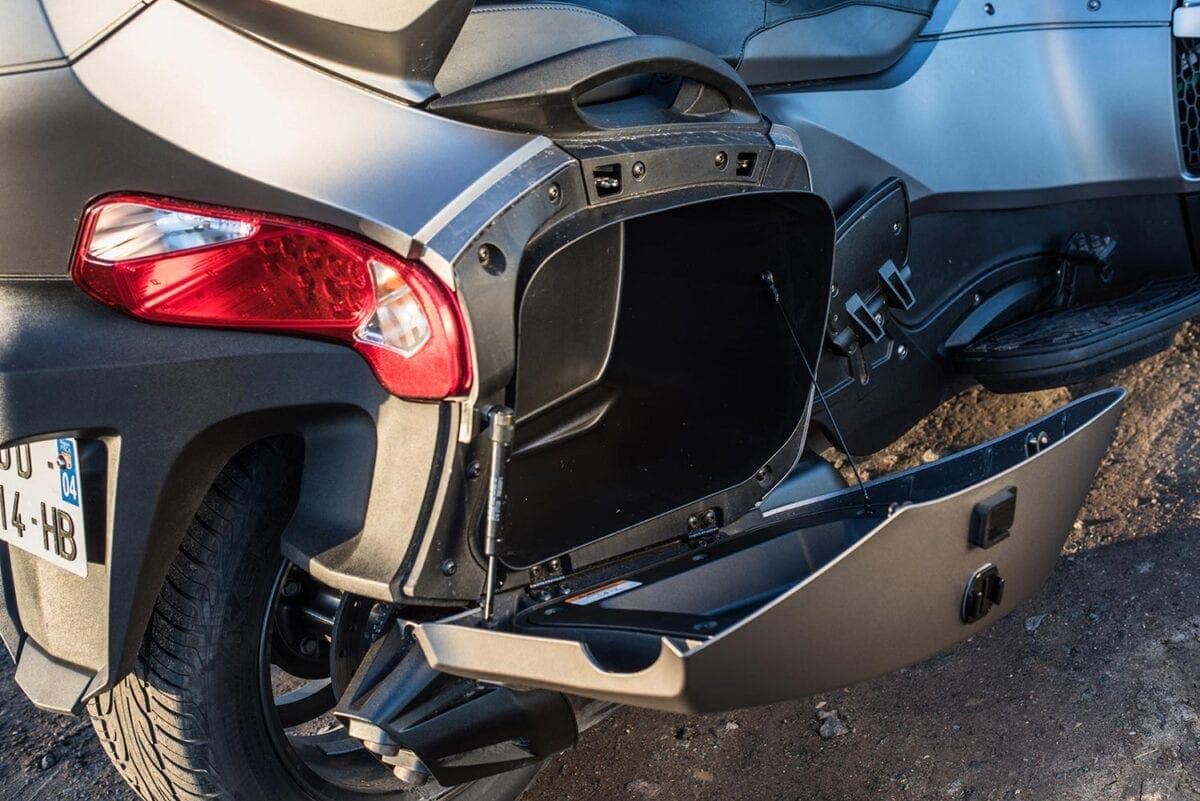 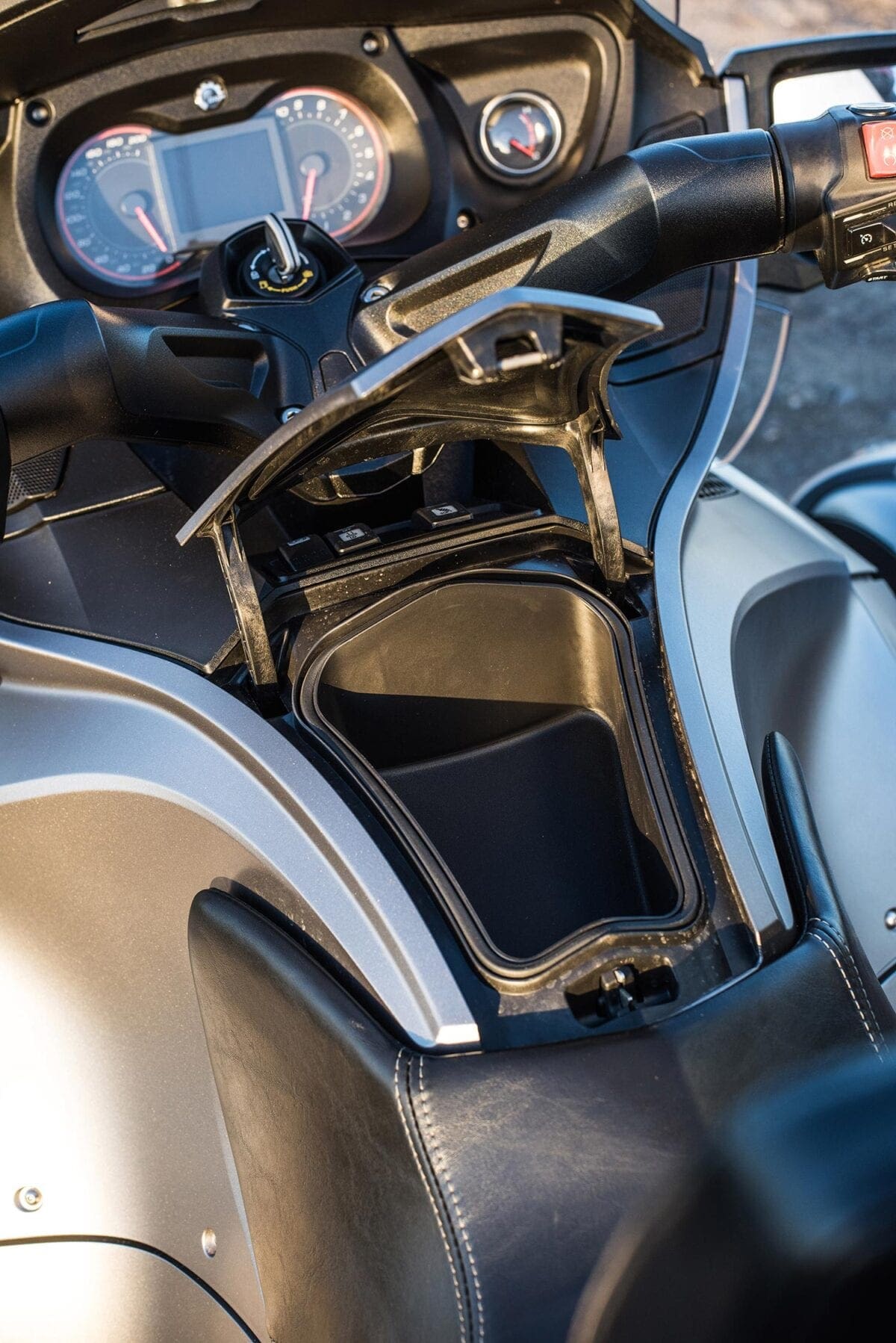 This is where people get confused. Sure, you can’t filter like you would on a bike, and unlike a car, you do get wet when it rains. Simplify your thinking to that level, and you won’t want one. However, look at it as a big touring machine and things start to change. A Honda Gold Wing costs £25,399 – slightly more than this RT-S. A couple passionate about touring, who’ve come to a point where they don’t want to give up biking, but also don’t want to balance the 421kg motorcycle, might well consider a Spyder. Introduced in 2008 to the UK, there are already over 500 on the road, with a wide audience including Wayne Rooney and Peter Crouch owning the sportier models.

The RT-S has a huge 155 litres of storage in its twin rear panniers, rear box and front trunk (a shade over the ‘Wing’s 150 litres); easily enough for a tour, or just a week’s shopping, as I found out on a trip to Tesco (though you can only fit full-face lids in the right pannier and front trunk).

Heated grips are standard on all RTs, but this S model also comes with heated passenger grips, which my wife claims are the “best things ever”. A heated seat would have been a nice addition, though one is available as an option. This bike came with the optional rider’s backrest, which adds to the incredibly comfortable standard seat. 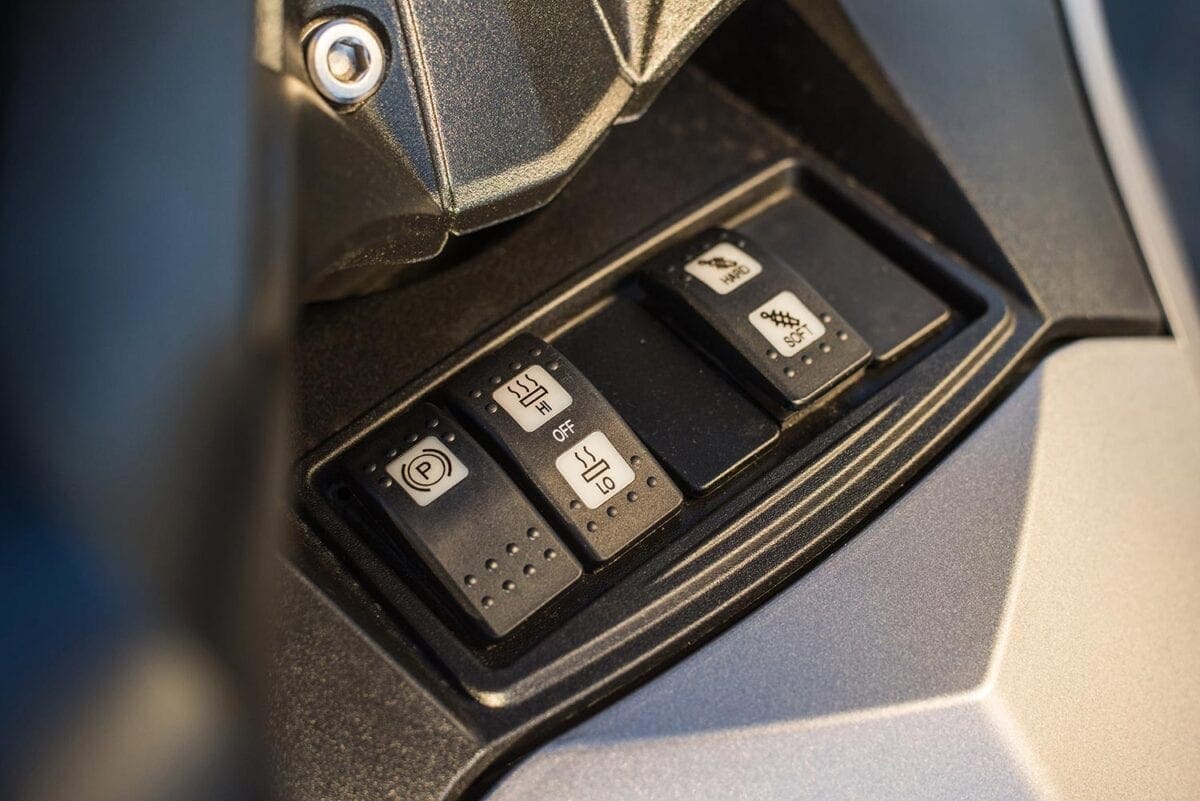 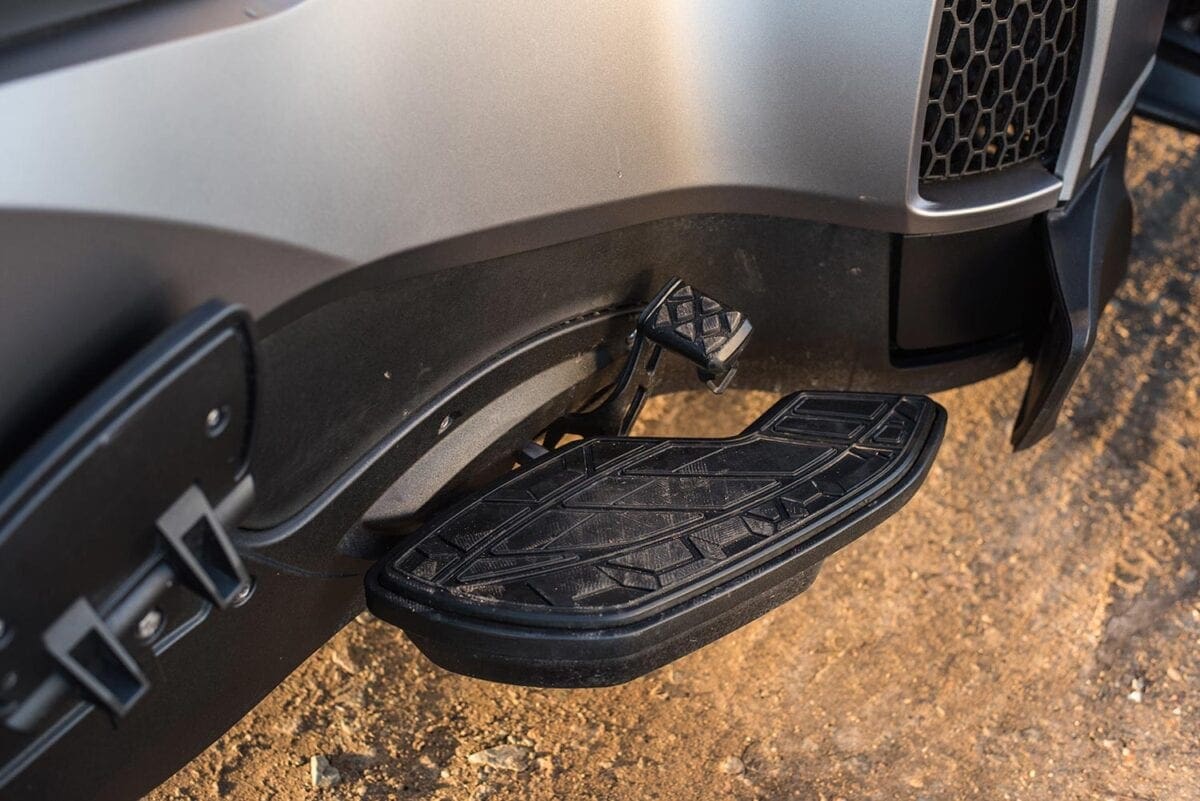 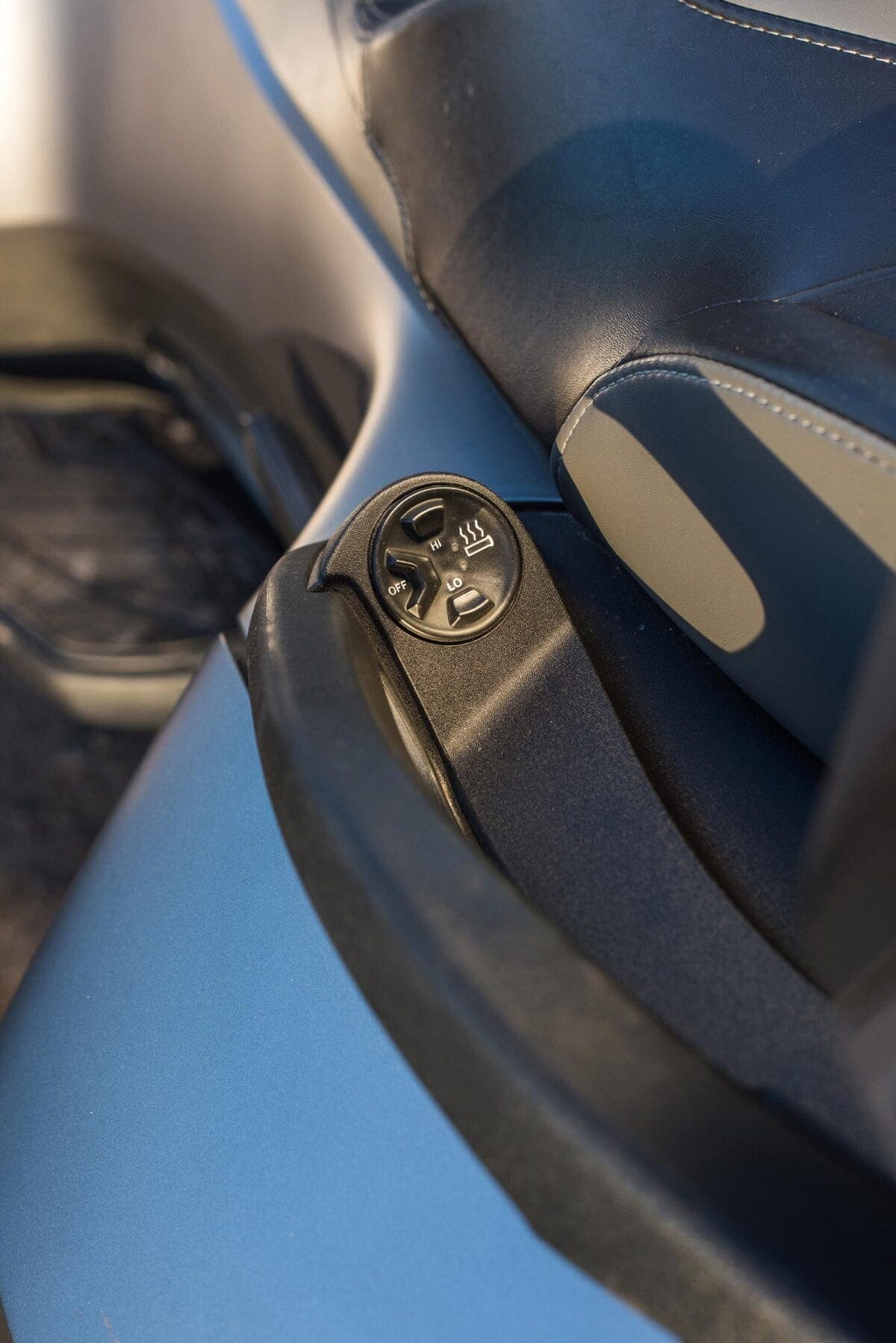 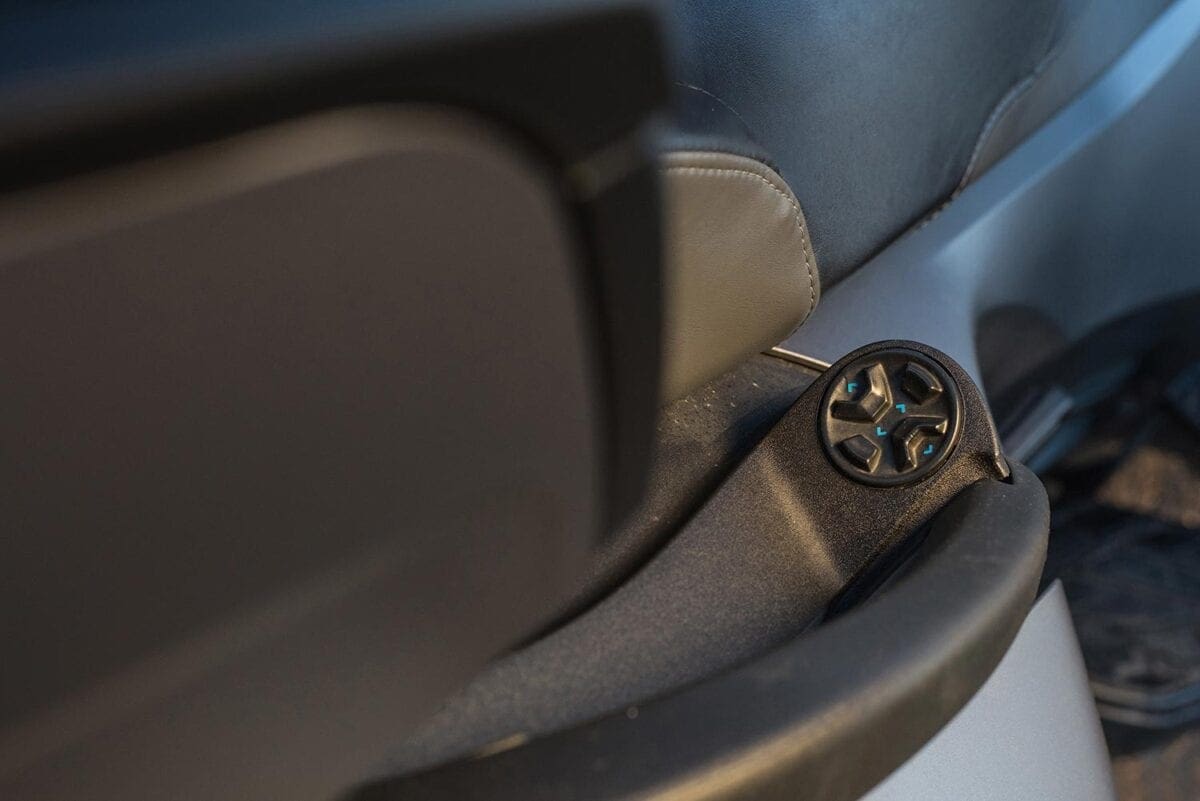 The clear, full-colour display – which sits between analogue speed and rev dials – gives additional info, including suspension setting, gear position, clock etc. The screen also shows data for the AM/FM radio and iPod control (currently pre-Lightning connection only). A tone control and RDS radio were the only notable omissions, besides a fuel economy gauge, though a neat touch are the stereo controls also fitted to the pillion handle. Working it out, I got 35mpg during my rides – I tend to be quite heavy handed, and was overtaking a lot, so a gentle tour should see 40mpg, taking the potential maximum range from 200 to 230 miles.

The rear box also contains a 12V power socket, and an optional tow-ball gives an additional 181kg of towing capacity.

I dropped the bike back at 158 Performance in Tallington, where servicing (every 9000miles or one year) typically costs £260-£380, depending on mileage.

Legally, you don’t have to wear a helmet – but I think you’d be daft not to – and if you’ve held your car licence since before January 19 2013, you don’t need a motorcycle licence. Some insurers might want you to have a bike licence, but shop around. I got a quote from Principal Insurance – the RT-S would cost me £440 a year for fully-comp, which compares to £295 for a Gold Wing. Principal also offer fully comprehensive cover for trailers, which is worth knowing with these machines. 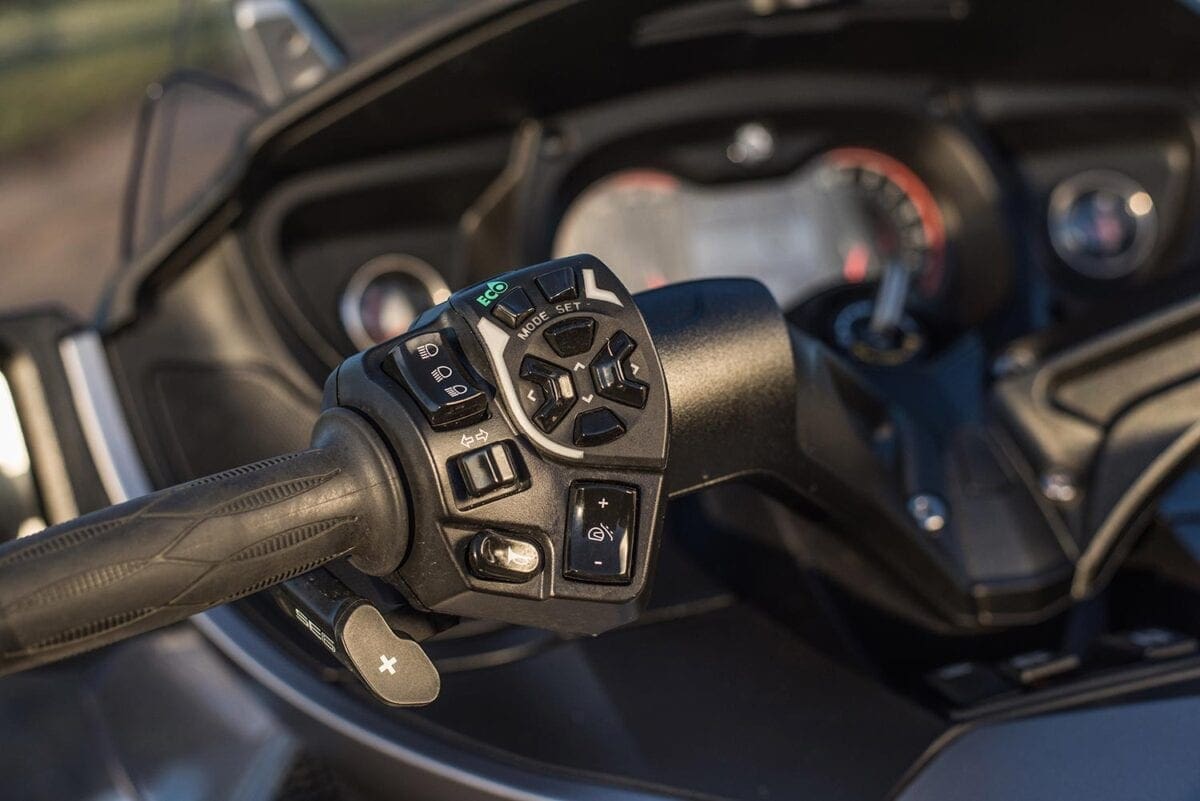 At first, terrifying. As a biker, you expect to lean and counter-steer; the Spyder feels so alien at speed that it takes a couple of hours to relax into it. My first ride was in torrential rain along the M6, and I’ll admit to being frightened. I didn’t know what the bike might do, and when I hit a huge area of standing water, my instinctive corrections at the moment of aquaplaning only made things worse.

But after a while it all starts to click. On that soaking ride home, I started to realise that a cheeky bit of extra throttle in small roundabouts could see the back-end step out, but it never got too far out of shape. There was none of the nervous tottering I’d have been doing had I been on two wheels, and when ridden sensibly, the Can-Am has a poise and precision that makes it easy to enjoy in any weather. 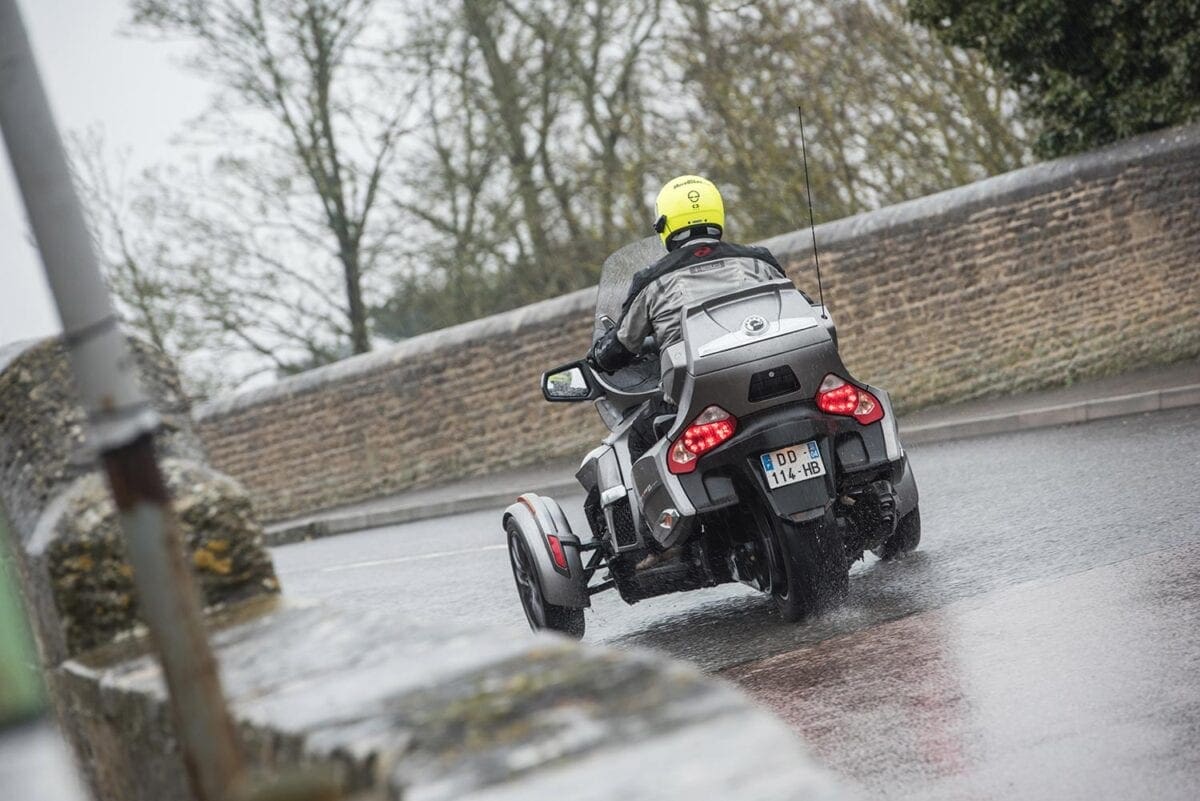 The width can sometimes be unnerving – roundabouts again show this up, as you don’t have the potential space a bike offers, so at first you feel more vulnerable as you’re closer to the trucks and other traffic. The very precise steering (with unobtrusive power assistance) also translates the slightest touch into a direction change, so a light grip on the bars is all that’s needed.

Losing the leaning motion of a bike can make rides a little more tiring on twisty routes. This is offset by not having to hold the machine up at a standstill, but there is more effort required to flowing through tighter corners than simply leaning your body.

True, you won’t be able to ‘create’ gaps in traffic like you would on a bike, but when there is a space to be taken, dropping down through the smooth, quick gearbox delivers a pleasing howl from the Rotax engine as you quickly pass. This is no city commuter; it’s a touring machine, and in its natural environment it finally clicks into place. When I first took my wife out on it she squealed “Slow down, I don’t like it”– she too is used to the rolling nature of a bike – but as the miles slid away she settled into the plush seat and enjoyed those heated grips. Coming out of a small village, we reached a stunning hill-top of rolling fields. A car would never offer this freedom of view, and we were able to roll gently to a stop without worrying about the bad camber, muddy edge and potholes that would make balancing a large touring bike unnerving. Relaxed, we took it all in, then carried on to the pub.

You might claim the Can-Am Spyder RT-S has got all the disadvantages of a bike, with none of the benefits of a car. I prefer to look at it as having all the incredible views and much of the feeling of a bike, with many of the conveniences of a car. This is a niche machine; a test-ride of the RT-S might be just what you need to awaken your passion for touring. Or maybe it’s not for you at all. Yet. 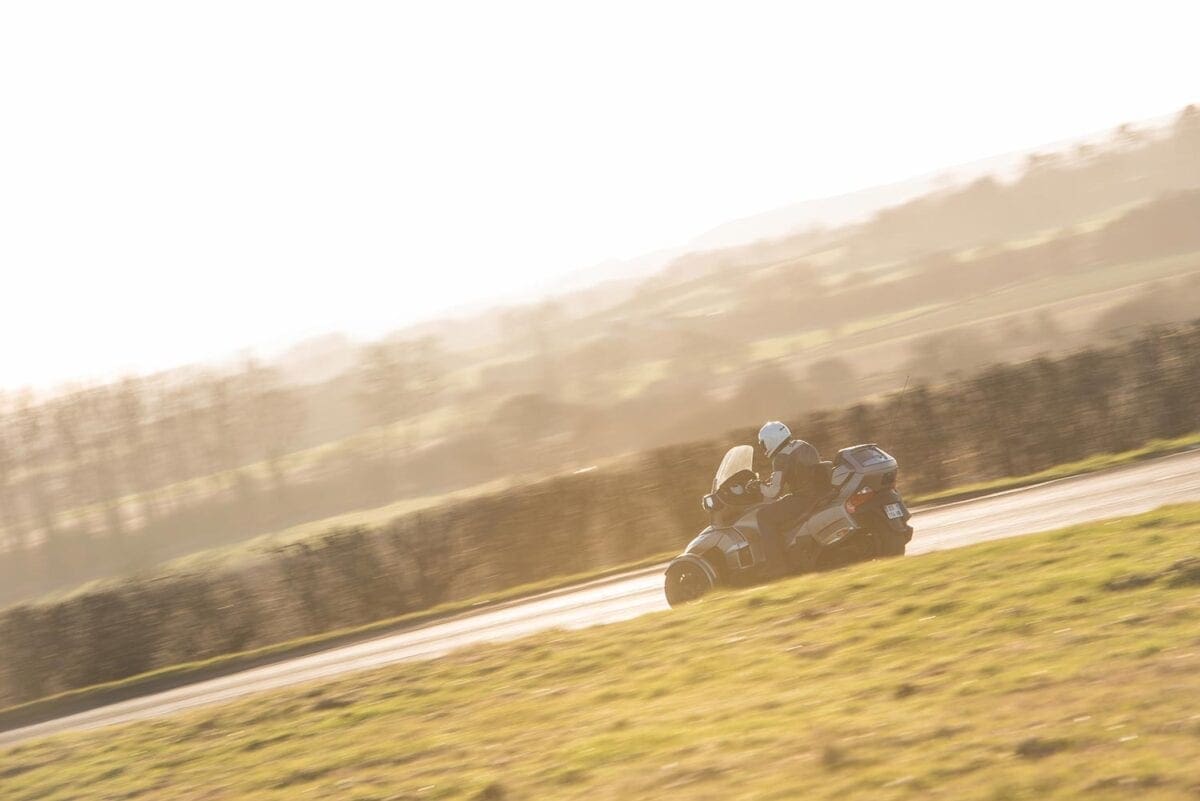 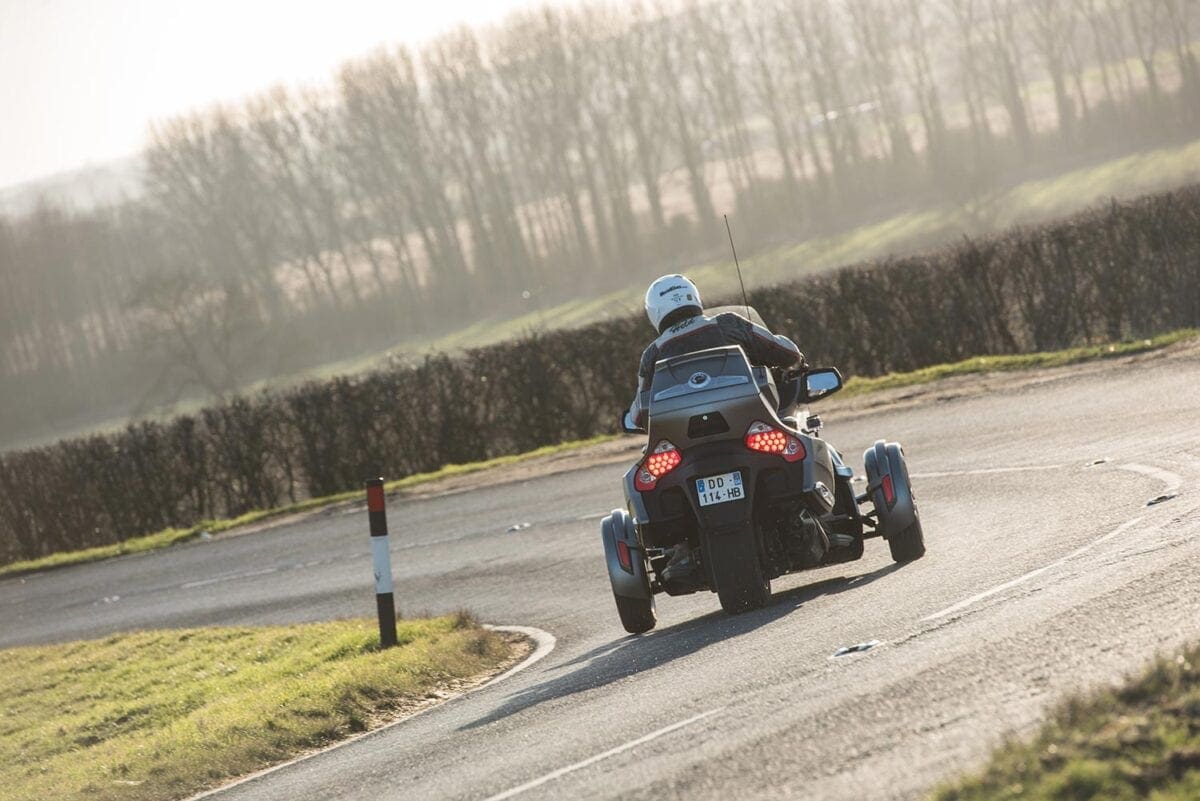