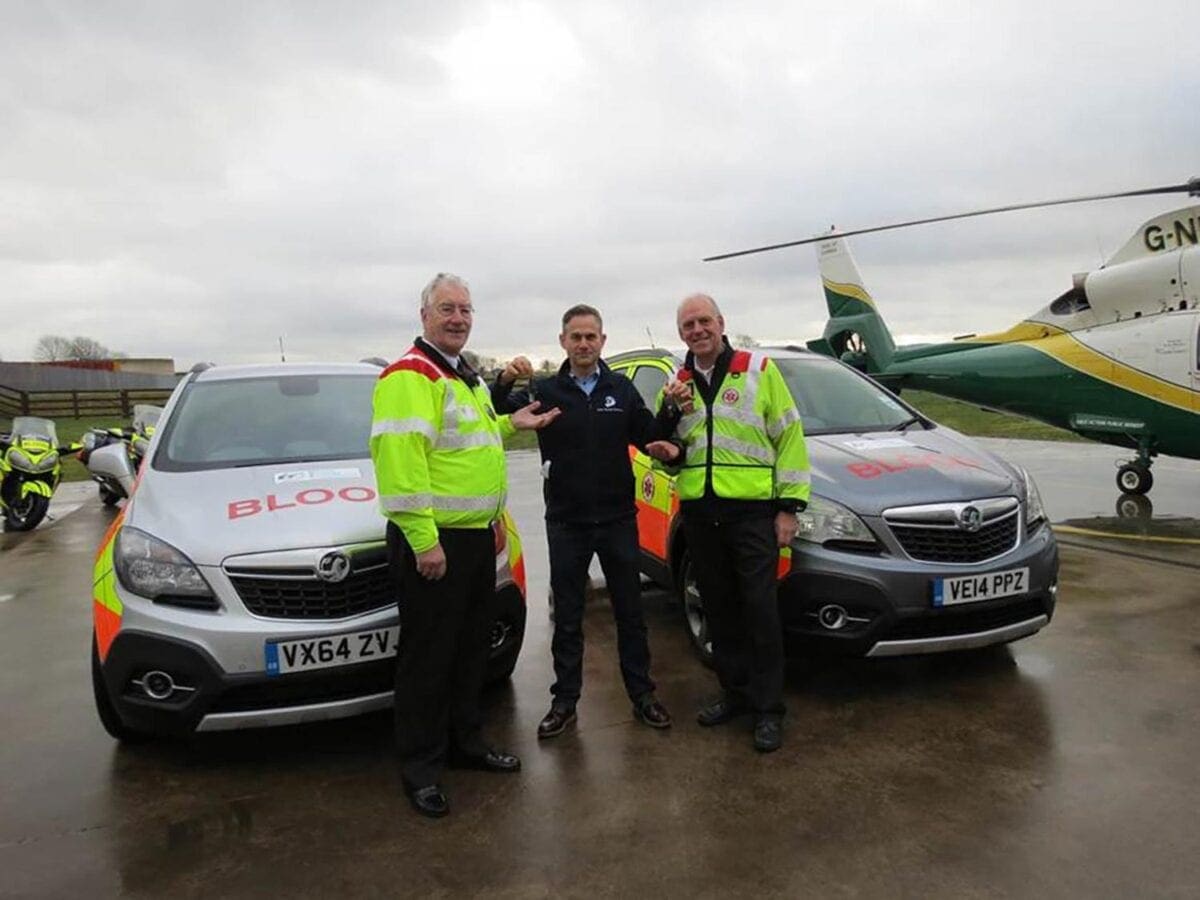 Two Vauxhall Mokka 4×4 vehicles were handed over to two charities – Northumbria Blood Bikes and Blood Bikes Cumbria – which provide vital transportation of blood in the region.

The donation was made by the Henry Surtees Foundation in support of the Blood On Board project, which allows the Great North Air Ambulance Service (GNAAS) to carry and administer blood on its rescue missions.

The vehicles were handed over on behalf of the foundation by James Whitham, the Yorkshire-born motorcycle racer turned commentator. In a racing career spanning 18 years, he secured four British titles and competed in World Superbike, World Supersport, Endurance and Grand Prix.

As well as the success, the hard-charging motorcycle racer also survived crashes and battled lymphatic cancer.

He said: “I’ve chased time at race tracks in pursuit of podiums, but for the likes of the Great North Air Ambulance Service, every second can literally be the matter of life or death.

‘The Air Ambulance and regional Blood Bike groups do an incredible selfless job; I hope that I will never need their services, but having had mates rescued from the side of remote mountains, and of course at race tracks – its a service that resonates with me.”

James Whitham visited the GNAAS base at Langwathby, near Penrith, to officially hand-over the two SUVs to be used by the two Blood Bike groups so that they have all-weather transport for the ferrying of the blood between hospital and aircraft.

The Henry Surtees Foundation was set up by motorsport legend John Surtees following the tragic death of his son Henry.

Jamie added: “I was absolutely honoured to be asked to represent John Surtees OBE and The Henry Surtees Foundation today to hand over the two vehicles.

“I know that John would also like to say a special thank you to Vauxhall for their support too. I’m sure the assistance of these vehicles will be a huge benefit to the region and help save multiple lives.”

Previously, the Henry Surtees Foundation has also donated equipment to GNAAS including thermostatically controlled boxes and blood warmers to enable them to deliver fresh blood supplies to the scene of life threatening accidents, and carry out roadside blood transfusions. GNAAS is the only air ambulance in the North of England to perform this life-saving procedure, which has been administered three times since launching six weeks ago.

Owain Harris, of Northumbria Blood Bikes but also speaking on behalf of his Cumbria counterparts, said: “We are extremely grateful to the Henry Surtees Foundation for their generosity in providing a four wheel drive vehicle to the charity. Normally the blood is transported by motorcycle, however when the roads are covered in snow we are unable to ride, and would have to suspend the service.

“The Vauxhall Mokka, a four wheel drive, means that the blood will get through, every day, regardless of the weather in order that The Great North Air Ambulance can carry out it’s vital role in saving lives using the Blood on Board project.”

The Blood on Board project was devised by Dr Rachel Hawes, of GNAAS and Newcastle Hospitals NHS Foundation Trust.

She said: “After years of research, the project is now active and is already benefitting patients across the North. Lives will be saved because of this advancement in medical care, it is as simple as that. This would not have been possible without the support of Blood Bikes and the Henry Surtees Foundation, and we are immensely grateful to them for that.”

For more information on the Henry Surtees Foundation visit: www.henrysurteesfoundation.com