By Tony Carter|2020-06-23T15:49:44+01:00March 25th, 2015|Categories: News|Tags: Bruce Anstey, Dan Kneen, MoreBikes|
After finding himself without a ride just over a month ago, Manxman Daniel Kneen now finds himself with his best chance of getting onto the podium having signed for the Valvoline Racing by Padgetts Motorcycles team for the 2015 Isle of Man TT Races. 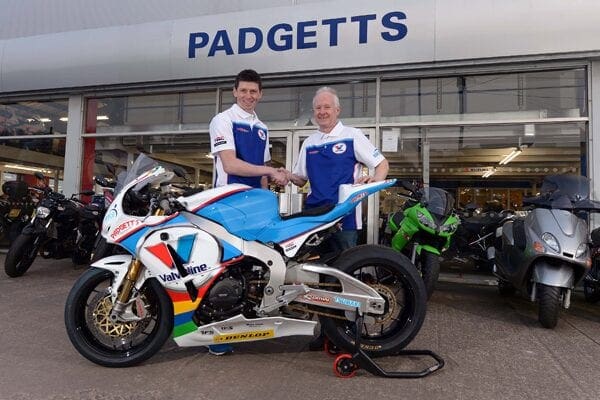 Kneen, who took his maiden International Road Race victory in last year’s Ulster Grand Prix Superstock Race, will contest the RST Superbike, PokerStars Senior, RL360 Superstock and Monster Energy Supersport Races and with Bruce Anstey and Cameron Donald as his team-mates.  The Batley based outfit have a superb chance of adding considerably to their numerous tally of race wins and podiums.
The talented 27-year old, who dominated the Irish Road Race Superbike Championship in 2014, was due to line up for another team at this year’s event but when they unexpectedly pulled the plug in January it left the Braddan rider on the sidelines.
However, his fervent work since has paid off and he will now line up for one of the TT’s greatest ever teams, headed up by the enthusiastic Clive Padgett and his hard working crew, further strengthening their position as one of the leading team’s at this year’s event.
Since taking an unprecedented hat-trick at the 2008 Manx Grand Prix, Kneen has been a regular top ten finisher at the TT with his best finish coming in the opening Supersport Race in 2010, when he placed fifth. He now has nine top ten finishes to his name and an impressive collection of 18 silver and 4 bronze replicas from his 28 starts.
Last year saw him finish all five races inside the top fifteen with three of those finishes – the Senior, Superstock and second Supersport Race – all being inside the top eight. The meeting also saw him record his best ever lap of the Mountain Course, 129.360mph, to move up to 17th on the all-time fastest list of riders.
In addition to his outings at the TT, Kneen will also contest the North West 200 and Ulster GP for the team along with selected outings in the Pirelli National Superstock 1000cc Championship.
Speaking after signing with the Padgetts Motorcycles squad, Dan Kneen said: “I’ve gone from having nothing to, to securing a ride with one of the best teams in the paddock in a short space of time. I can’t thank Clive enough for giving me this opportunity and I am really excited about getting the chance to work with him and his crew. It’s one of those teams that you always look at when you are coming through the ranks, hoping that one day you might get the chance to ride for them, and my chance has come and I intend to take it with both hands.”
Team Manager, Clive Padgett added: “We are delighted to be working with Dan Kneen in 2015. He is a rider we have long admired and who we feel has shown great potential, often without the chance to really show what he is capable of. We see this as the start of what will hopefully turn into a long relationship and we want to be part of Dan realising his potential over the next few years.”