Rossi Says Race Win Was ‘One of best ever’ MotoGP Outings 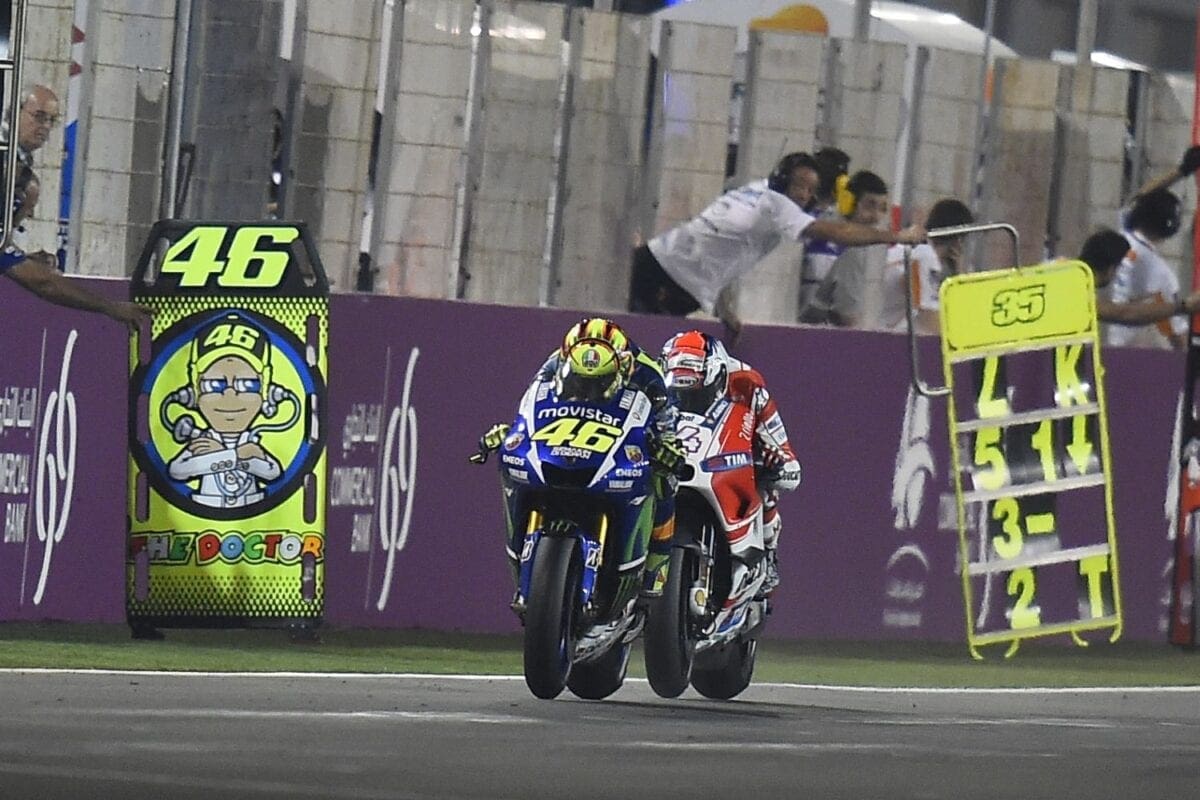 Top tweet by Rossi after the Qatar MotoGP round: ‘Thanks to the best team of the world.together from 15 years(more or less).great job guys,as always.’

Movistar Yamaha MotoGP‘s Valentino Rossi opened the 2015 MotoGP season with a stunning victory at the Grand Prix of Qatar.  What started as a battle that could have been anybody‘s race, ended in a thrilling duel.

Rossi rode an incredible race. Starting from eighth on the grid, the nine-time world champion fell back to tenth position and took a few laps to get a feel for the situation. He then ploughed through the order on his way to the front of the field. He quickly overtook several riders to take fifth in a duel with rival Pedrosa on lap four. Keeping up his pace, he soon passed Hernandez for fourth and continued his podium chase by bridging a 1,5 second gap to rider in third. He then clawed his way to the front group of Dovizioso, Lorenzo and Iannone. This was the start of an incredible final battle between the two factory teams as the riders changed positions several times. 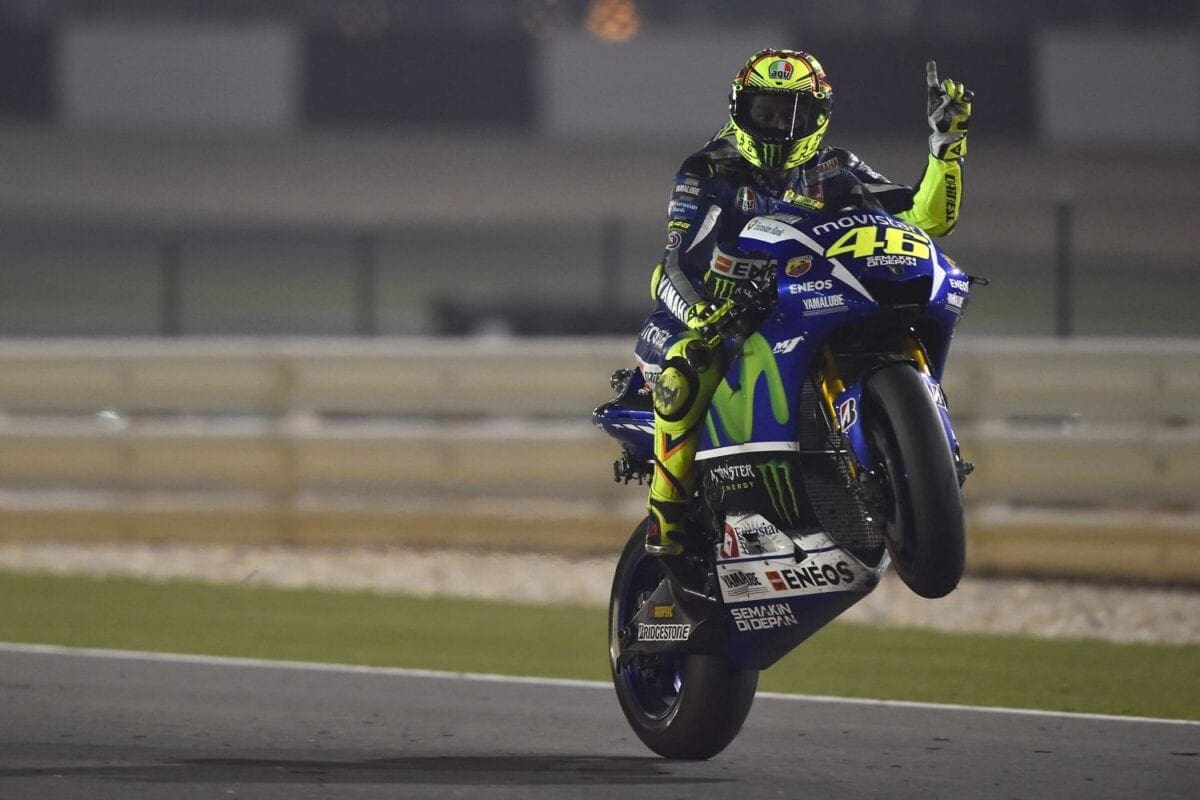 Rossi fought hard, eventually overtaking Andrea Iannone with four laps to go. A nail biting last few rounds with rival Dovizioso followed, with the Doctor giving one of his best performances in his 20 year MotoGP career. Fighting until the very last corner he gave everything to hold enough of an advantage to clinch the first victory of the 2015 season, with a margin of 0.174s.

Teammate Jorge Lorenzo also had a great start to his 2015 Championship, flying from sixth on the grid to grab second place into turn one. He continued to chase Dovizioso, as rival Marquez had run wide. Lorenzo took over at the front in turn 12 of lap two, but was unable to create a lead. The Mallorcan and Dovizioso battled fiercely and were later joined by Iannone and Rossi. Lorenzo feeling the heat of the following riders, made many attempts at reclaiming the lead, but was unable to hold first position. He fought bravely, but with four laps to go was forced to let his teammate and rivals go through due to a problem with his helmet. He finished fourth, 2.707s from the front.

But the nine times world champion reckons that the ride was amongst his best ever, he said: “In the last three seasons I always rode solid races and arrived on the podium but to come back with a victory is another thing. I am so happy because we suffered a lot during the practices and also the tests, but we worked very well for the 22 laps race and I was very strong. First of all you have to be lucky, but especially the work that we do with the team during the weekend makes the difference for my pace in the race. It was definitely one of the best races of my career, considering where we were yesterday. I really have to thank all my team, my engineers and all at Yamaha because I think today we did something amazing.” 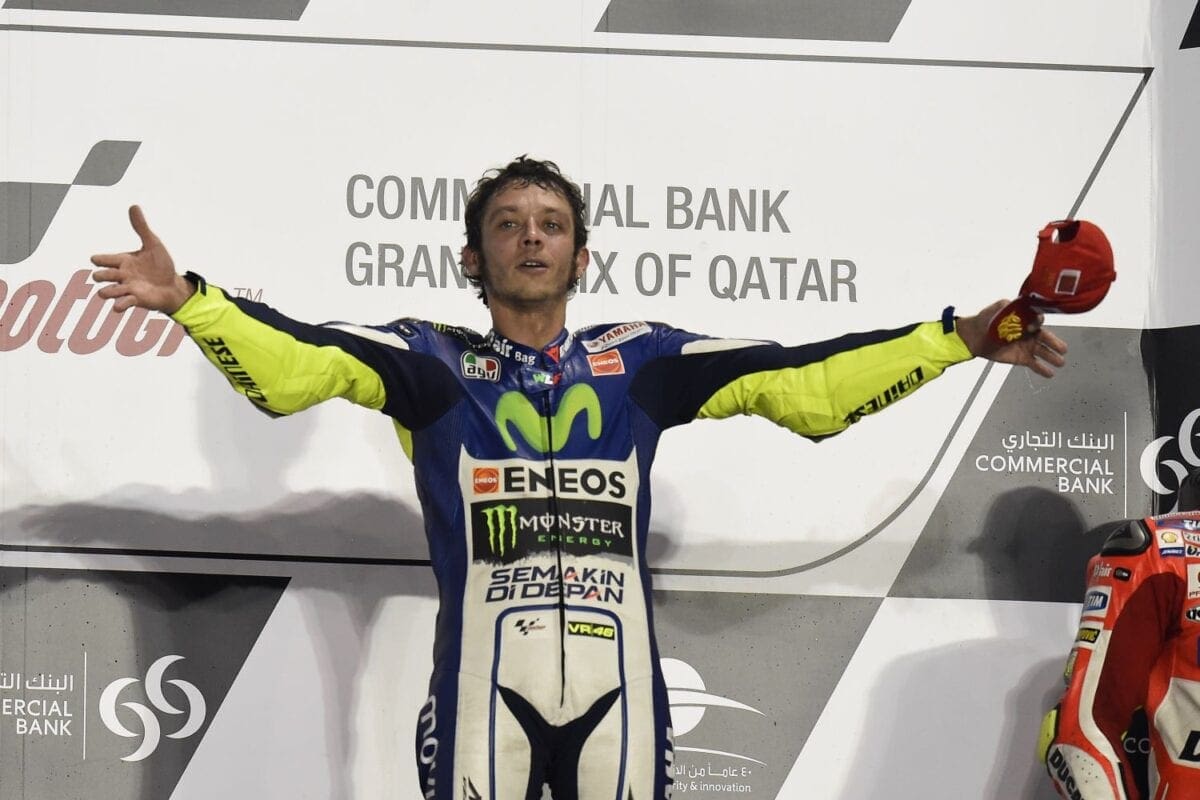 Lorenzo added: “It was a difficult race. After the first lap, I found myself in second place and I followed Dovizioso. I was faster and I passed him where I could in the fast corners. On the speed and in braking the Ducati was much stronger than our bike, but we could recover on corner speed while the acceleration was similar. To be honest, I thought that I could win the race, though it surely wasn‘t going to be easy, because Valentino had a very strong pace at the end of the race. I was feeling better and better, but suddenly there was something wrong when in the top part of the helmet the foam came loose and came down so I lost half of my vision. I couldn‘t see the corners very well and couldn‘t concentrate or ride like before and I was losing half a second or more per lap. In a race where, at minimum I could fight for the win, I finished fourth.”