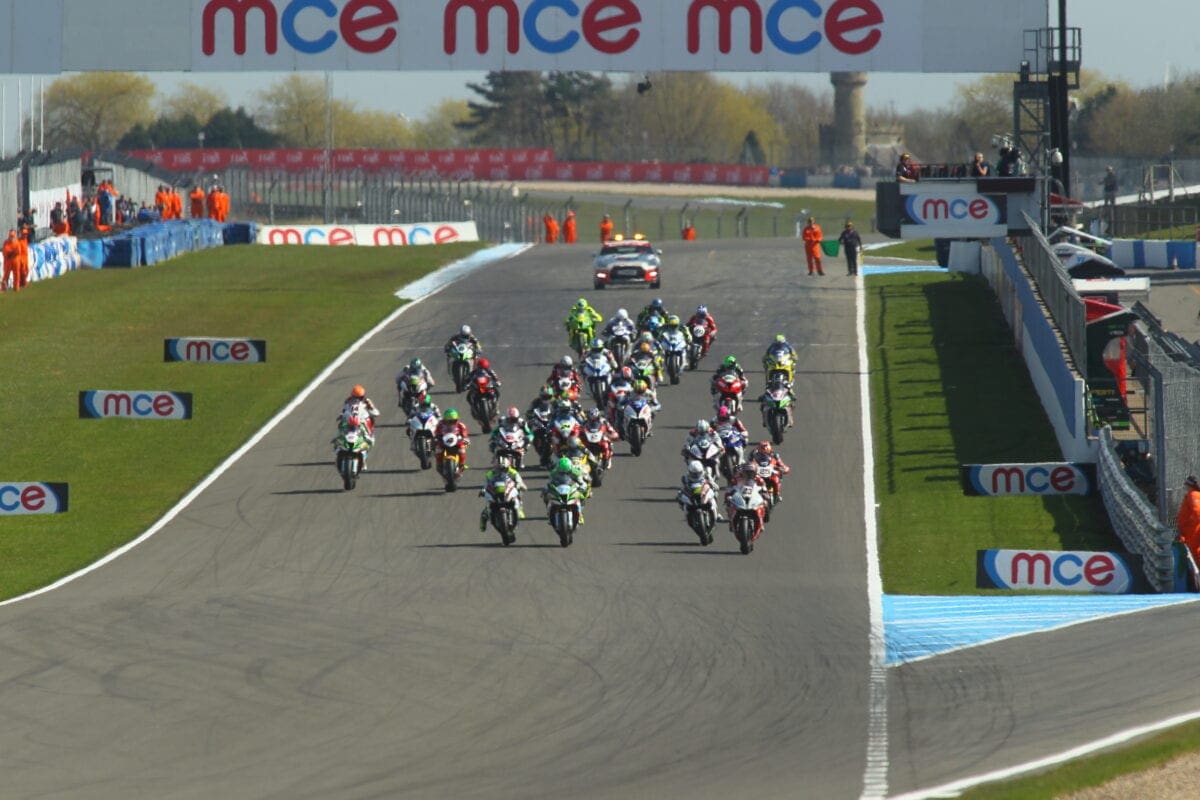 Byrne had grabbed the early lead in the first race, but after the intervention of the Nissan GTR Safety Car as marshal’s dealt with Ralf lo Turco’s crash, Ellison forced his JG Speedfit Kawasaki into the lead.

Byrne was trying to repay the move, but there was no way ahead of the Cumbrian who took his first race win in two years by 0.131s and Kawasaki’s first in the championship at the Leicestershire circuit since 1999. 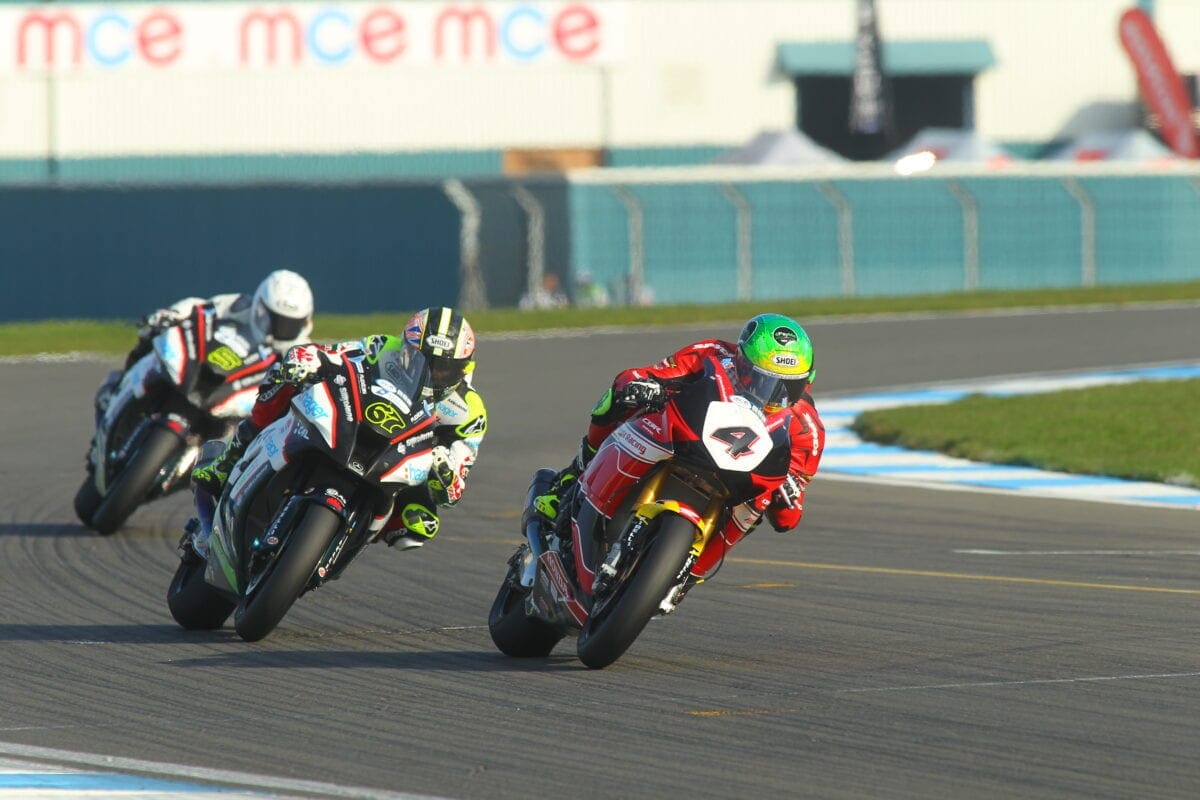 Josh Brookes had ridden hard and strong, surpassing even his own expectations, to bring the all-new Milwaukee Yamaha on to the podium in third place as he outgunned Honda Racing’s Linfoot at the Melbourne Hairpin to take the placing by 0.058s.

Ellison’s hopes of a repeat performance in race two were thwarted by a flat battery which caused him to miss the sighting lap period and because of that an enforced start at the back of the grid. He put in a determined performance to charge through the pack to salvage a twelfth place finish.

Ahead of him Byrne claimed the initial advantage, but Linfoot in second after pushing his way ahead of Stuart Easton, was reeling him in. The front running scrap was fast developing and soon they were trading places, with positions changing at nearly every opportunity.

At the end Byrne had that little bit extra, taking the victory from the young Yorkshireman as Easton finished third from RAF Reserves BMW rider Peter Hickman and Christian Iddon on the Bennetts Suzuki.

Brookes, who had lost ground after taking evasive action Kiyonari high-sided in front of him fought back to finish sixth. The Buildbase BMW rider leaving Donington Park with a single 14th place finish ahead of the next round at Brands Hatch in two weeks time. 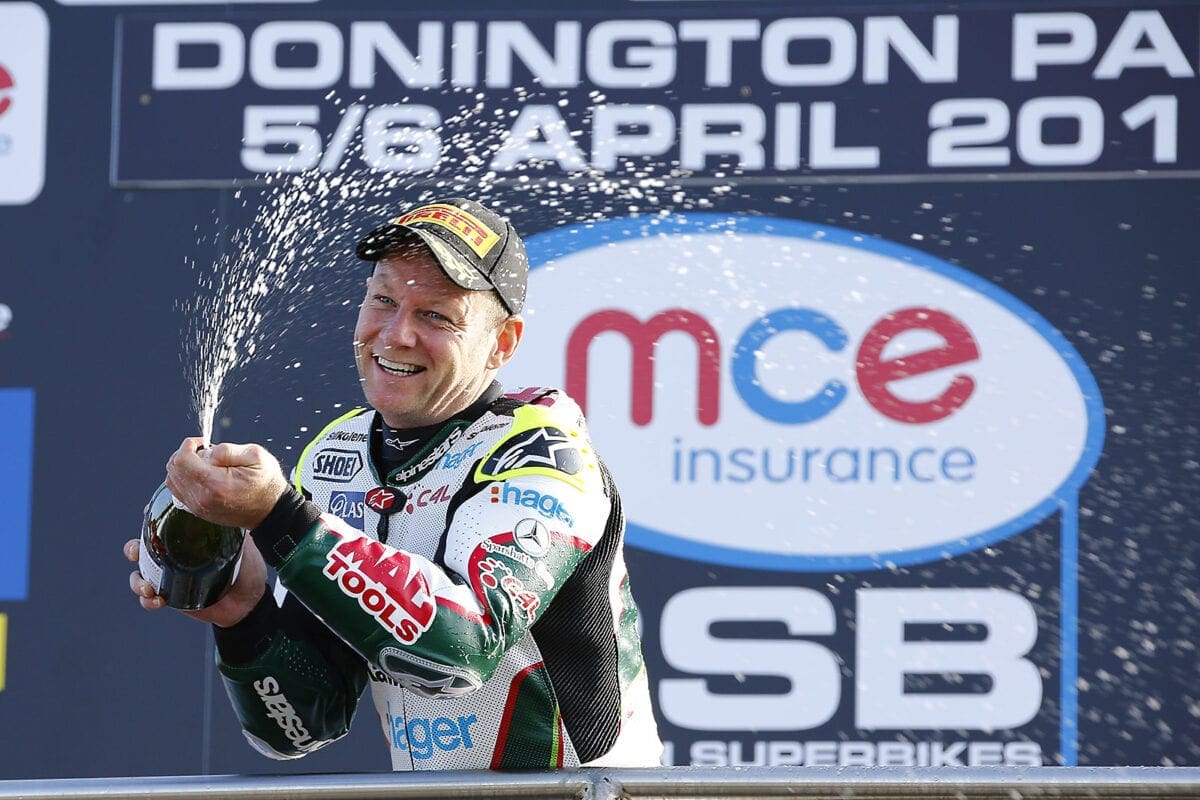 After the races Byrne said: “Honestly I didn’t know what to expect this weekend. I said after race one that I felt quietly confident that we would get stronger but I didn’t expect to go one stronger in race two to be honest! We have all been around a long time and we know you can never expect anything.

“I expected a battle with Kiyo, Josh and James and then I was racing with Stuart and Dan. The battles with Kiyo last year were so intense because of what was at stake, but this was the start of the season! To have a good old fashion bumping and racing with Dan, who is young and keen, in that race, reminded me a lot of how I raced with Alex [Lowes] in 2013.

“Dan rode really well and to be honest I just wanted someone in front of me because every time I got in front I made little mistakes as I am a little rusty, but now we can build off this and the PBM Kawasaki will only get stronger. I am only going to get stronger and fitter myself and I think we can be even stronger going into the next races and we will have a good plan for Brands Hatch.

“I was a little disappointed after qualifying as we were two tenths off, but the reality is I should have only taken the plaster off my hand on the Thursday before this race so to leave with a second and first place I really can’t grumble! We have been working really hard this weekend to get a better feeling and now it is onwards and upwards!”

Ellison added:  “It’s certainly been a mix of highs and lows, but to be walking away having taken GBmoto and JG Speedfit’s first ever BSB win is amazing. The team really deserve it too, so a big thanks to them for their support – especially Mark Smith-Halvorsen who stuck by me last year through the accident.

“It’s so frustrating to have missed the opportunity to challenge for a second win in race two though, the bike starts on a slave battery but every time we removed it the bike would die. It meant we had to replace it, but that requires us removing the fairings, seat and tank from the machine and despite the whole garage helping out, we just couldn’t do it time. Starting from the back wasn’t ideal, particularly with the size of the grid, and fighting through just takes time. We still scored points though so we can’t be too disappointed.”