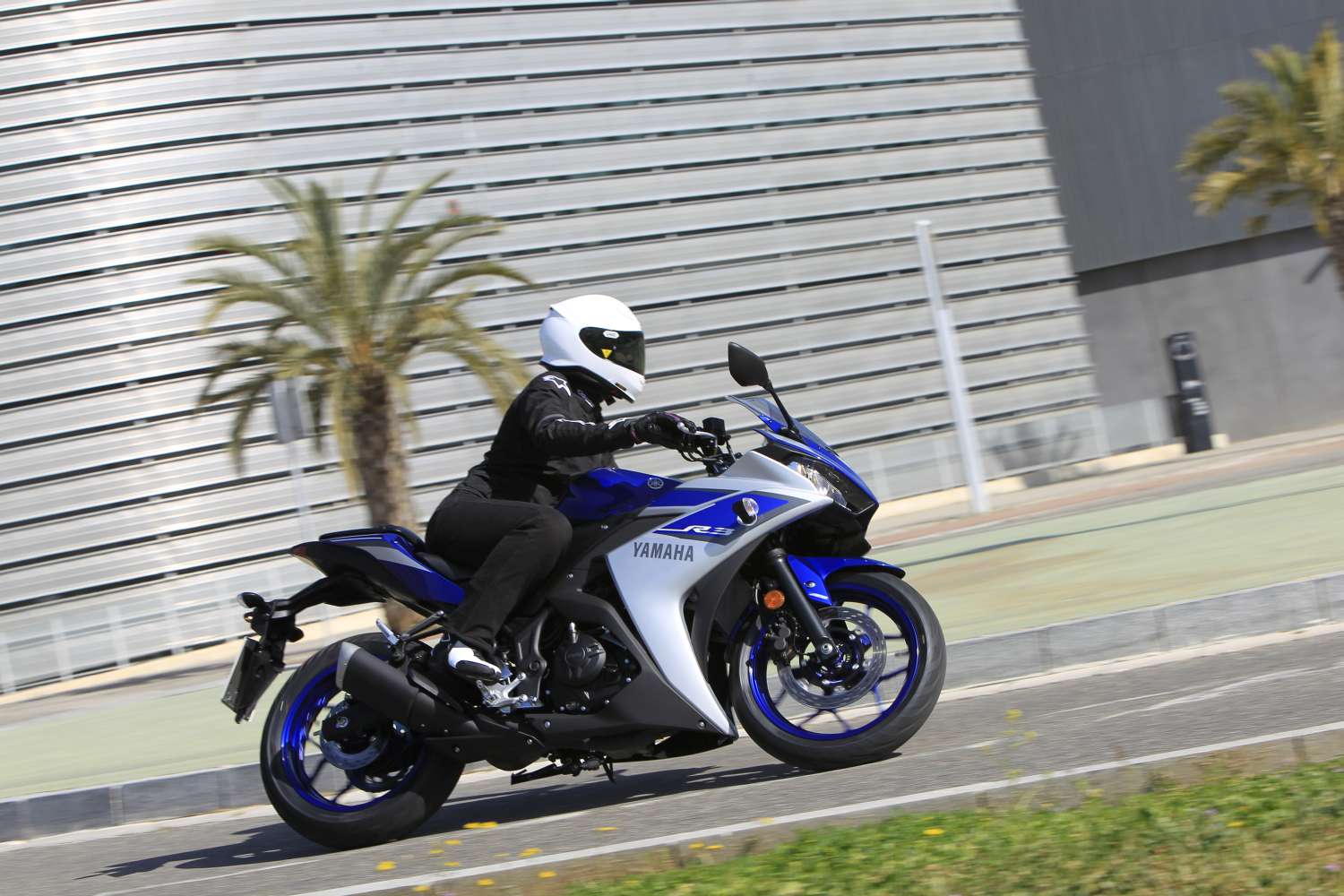 You may think that Yamaha has jumped on the 300cc class bandwagon, when actually it could be said, Yamaha are going back to their roots. Think back to the RD series from the 60s/70s, showing riders that you didn’t have to be on a big bike to have fun and go fast. Just like the two-stroke RD range was derived from the race track, so is the R3 – just this time it’s the YZF-R1M and maybe the gap from road to race is a tad bigger.

The Yamaha R3 has been designed to fill the gap between the YZF-R125 and the R6 and as such, it needed to be powered by an exciting but friendly engine to appeal to both camps of rider – the liquid-cooled, four-stroke, DOHC, parallel twin 321cc does the job and it does it well.

It powers out 41bhp @ 10,750rpm – making it A2 compliant and about as powerful as the original RD250LC (ok, no more ancient Yamaha references from now on) – and has 22lb-ft of torque at 9000rpm. It’s been purposefully designed to offer added ‘spice’ and focus has been put on the mid to high range. The bore and stroke is similar to that of an R6 (68 x 44.1mm and 67 x 42.5mm respectively) and it has plenty of punch, redlining at 13,500rpm. Fitted with a progressive throttle pulley, it ensures the power delivery isn’t scary for new riders and 1st gear is easy to manage through town. The six-speed gear box comes in handy for motorway use – stick it into 6th to cruise and it’s not uncomfortably revvy.

Yamaha have taken steps to make it efficient as well as fun: plating the pistons to reduce weight, carburized conrods – as seen on previous generation R1’s – and offset cylinders to reduce the friction against the cylinder wall. I got an average fuel consumption of 63mpg from the 14 litre fuel tank and can’t say that economy was front of my mind whilst riding up the undulating roads of Barcelona and out on track so the figure could easily be more.

Being a supersports bike, a lot of emphasis was placed on handling by the development team – a diamond steel frame holds the engine and just like its bigger brothers in the R-series, weight distribution is 50/50. A long swingarm, which is around the same size as on the R1, helps maintain this. The long swing-arm also adds high speed stability to a chassis that turns quickly too. 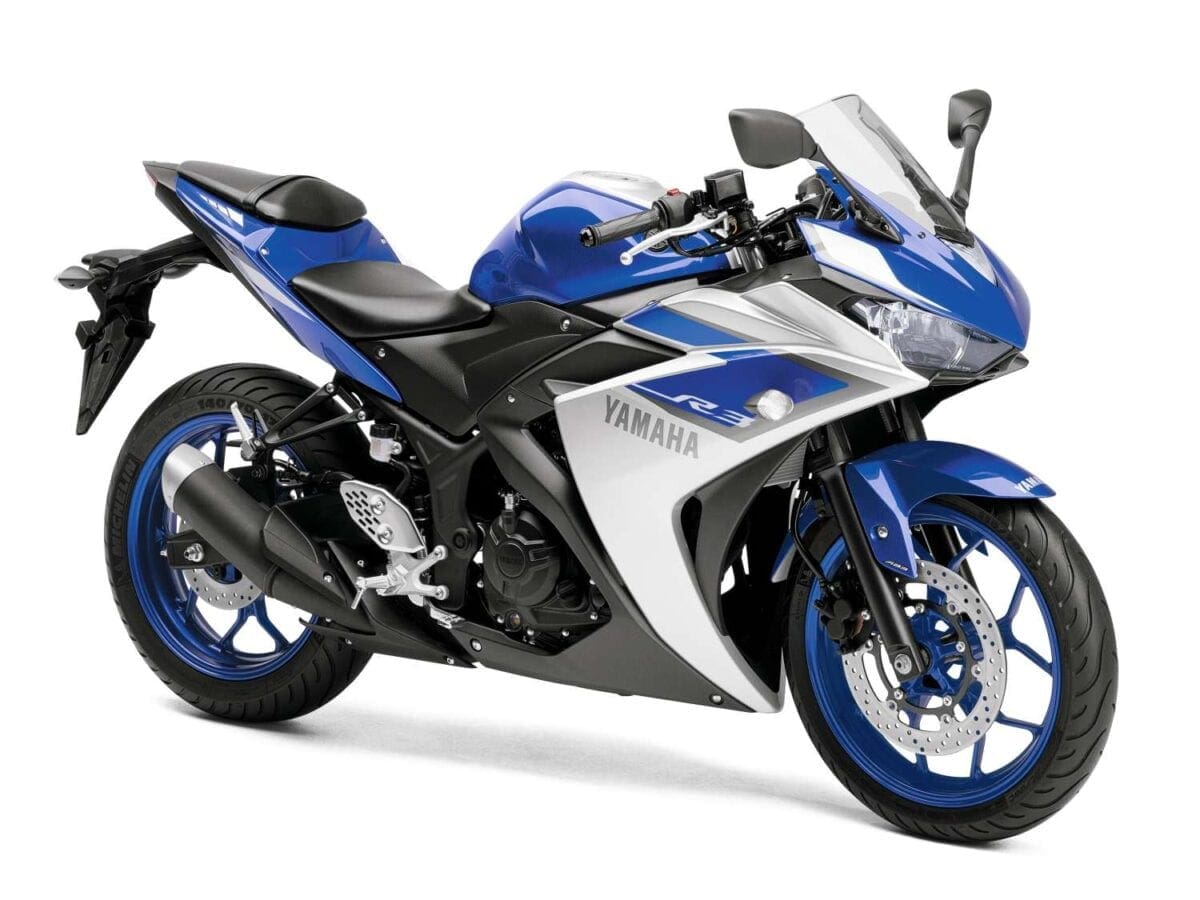 KYB takes care of the sporty but comfortable suspension – forks on the front with 130mm travel and 7-step pre-load adjustable direct link monocross on the rear.

At 169kg fully fuelled, it weighs 20kg less than the R6 – a bike that is one of the lighter options from the 600 class. ABS comes as standard and the R3 is fitted with hydraulic disc brakes on the front and rear which work well and bring the bike to a progressive stop.

The 780mm seat height means it’s accessible to riders with legs on the shorter side. At 5ft 6, I could easily put my feet down properly on both sides, something which is always a confidence booster. 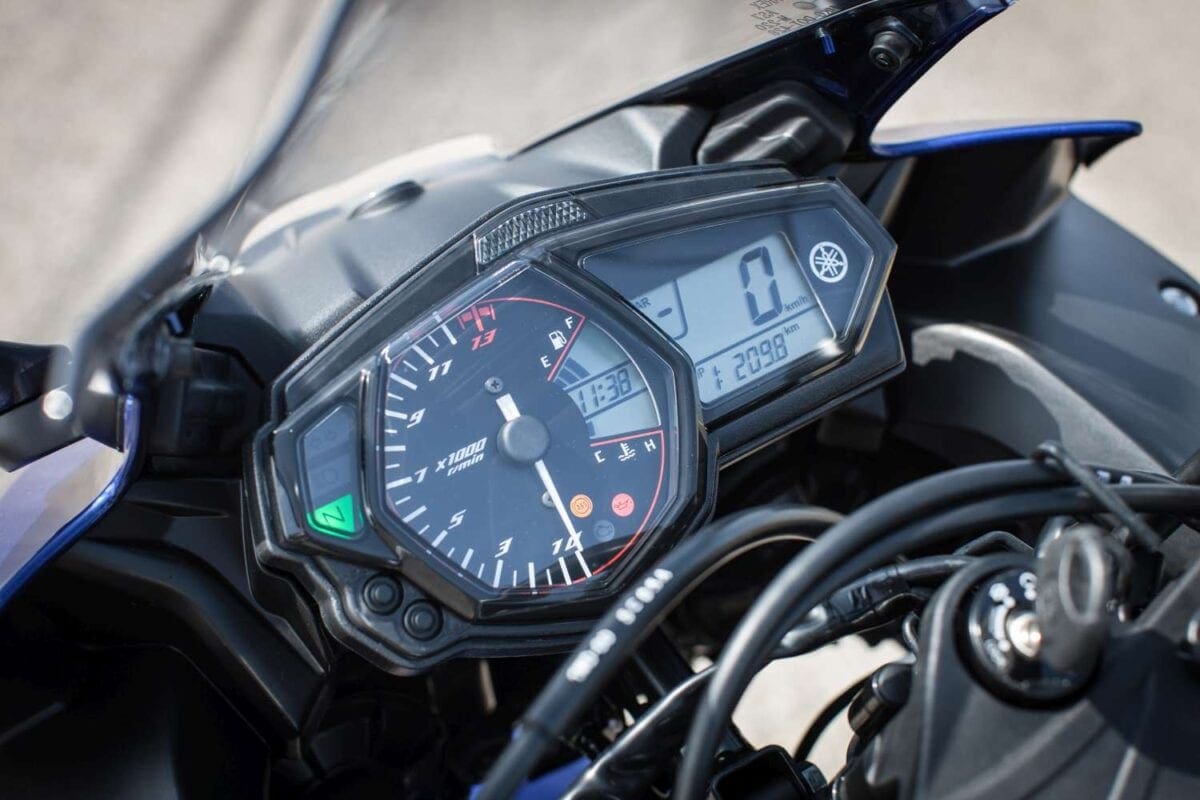 There are essentially two camps of riders who it could be a dream bike for – young riders who are sports-bike minded who may be restricted to an A2 licence or who are moving up the cc-ladder but also more experienced riders looking for a fun supersport bike which is more affordable than a bigger machine.

Talking of affordability – it’s worth checking out the PCP deals with your local authorised Yamaha dealer. With a deposit of just over £1100 and monthly payments of £79, you could be riding away on one…

Colour options include Race Blue and Midnight black and the bikes will be in dealers at the beginning of May. 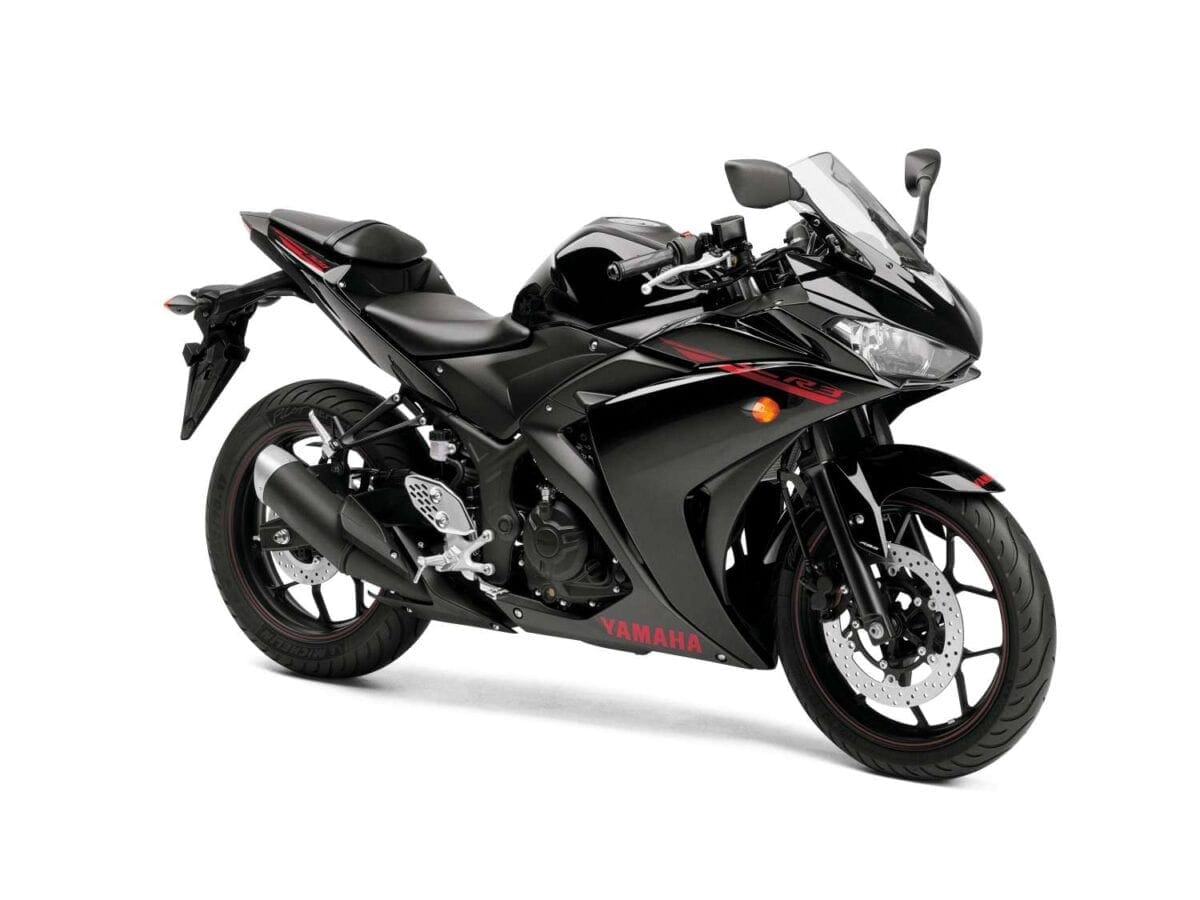 There’s a whole host of accessories that you can add including: Akrapovic slip on muffler, seat cover, licence plate holder, engine protectors, sports screen, rim stickers, tank pad, LED indicators and a number of luggage options. It comes with a two year warranty.

I’ve owned my R6 for around six years so the bike had a lot of live up to. Would it give me the same smile as my beloved machine? It did – in fact it gave me a bigger one.

It’s easy to look at a bike like the R3 and think that because of its capacity it’s purely for new riders – it’s not. It’s great fun and for some riders, knowing that they’re using all the engine and power makes it more fun. Likewise for new riders, it will really build your confidence – a  combination of things including the ABS, the riding position and the power delivery makes it a friendly machine, but one you can have fun with and experiment with.

The riding position isn’t too extreme – yes, it’s sporty and there is some weight on your wrists but not as much as you might think which would make riding it every day a pleasure rather than a pain. It’s nimble in traffic and the focus on ‘ease of handling’ is evident as you weave in and out of parked cars and traffic. There’s movement in the bars too – 34 degrees both ways to be precise – which makes it easy to move around and park up in tight spaces. The clutch was light and easy and it was smooth throughout the revs. 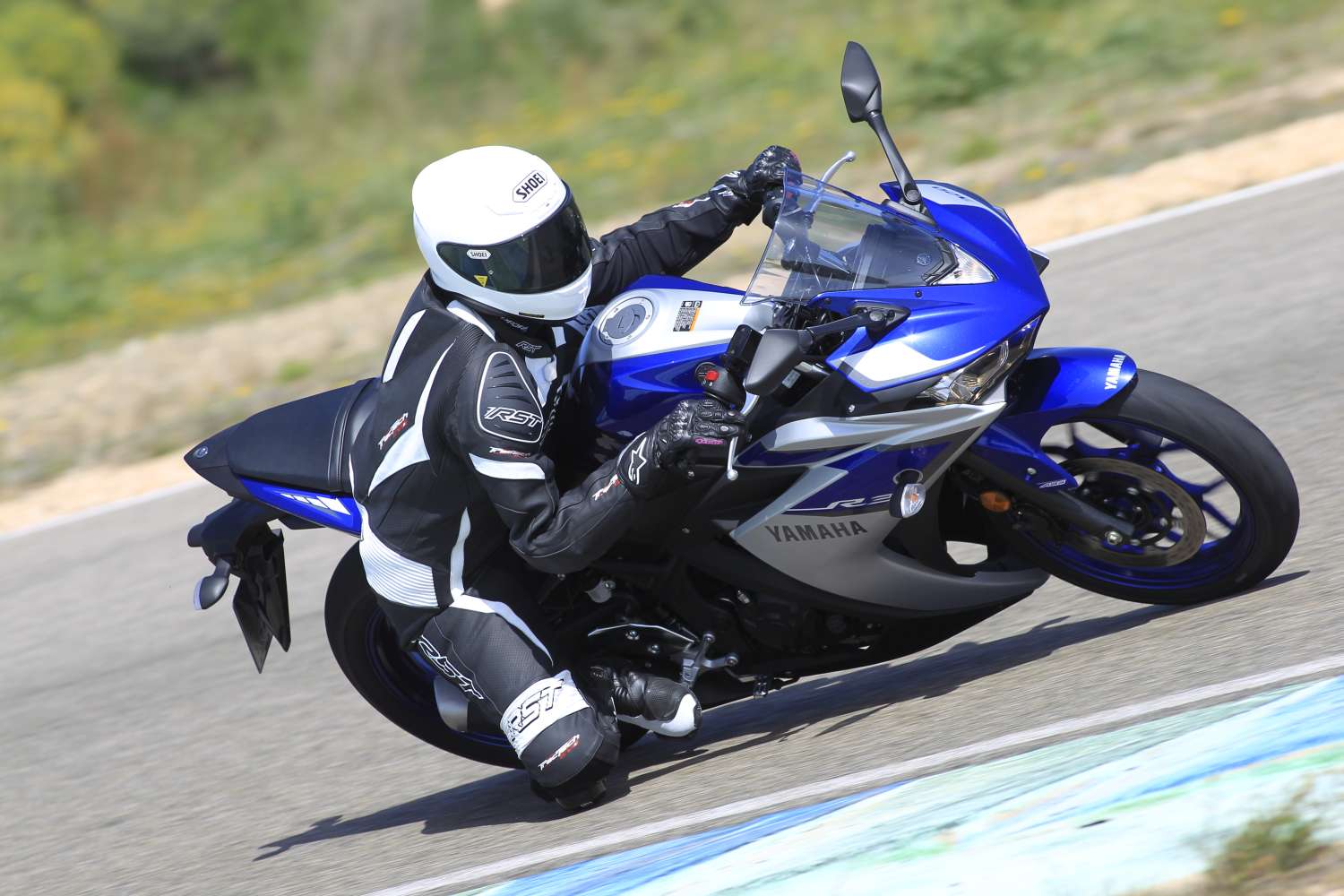 We had the opportunity to ride at the Calafat track in Spain – on track you can see the full potential of the R3 and really see it’s capabilities. Moving around the flat top seat was easy and the Michelin Pilot Street types – 110/70 on the front and 140/70 on the rear – performed well on track as well as on the street.

Yamaha point out that it has wind protection in the form of a slightly higher than normal windshield. Of course it’s not as much as you’d get on a scooter – but it does help buffet some of the wind over the top of you.

I like this bike and I love what it represents – good fun on smaller capacity machines. The ride is what you make of it and the R3 is happy to be your reliable friend, but it’s more than happy to get up to mischief if you want to… 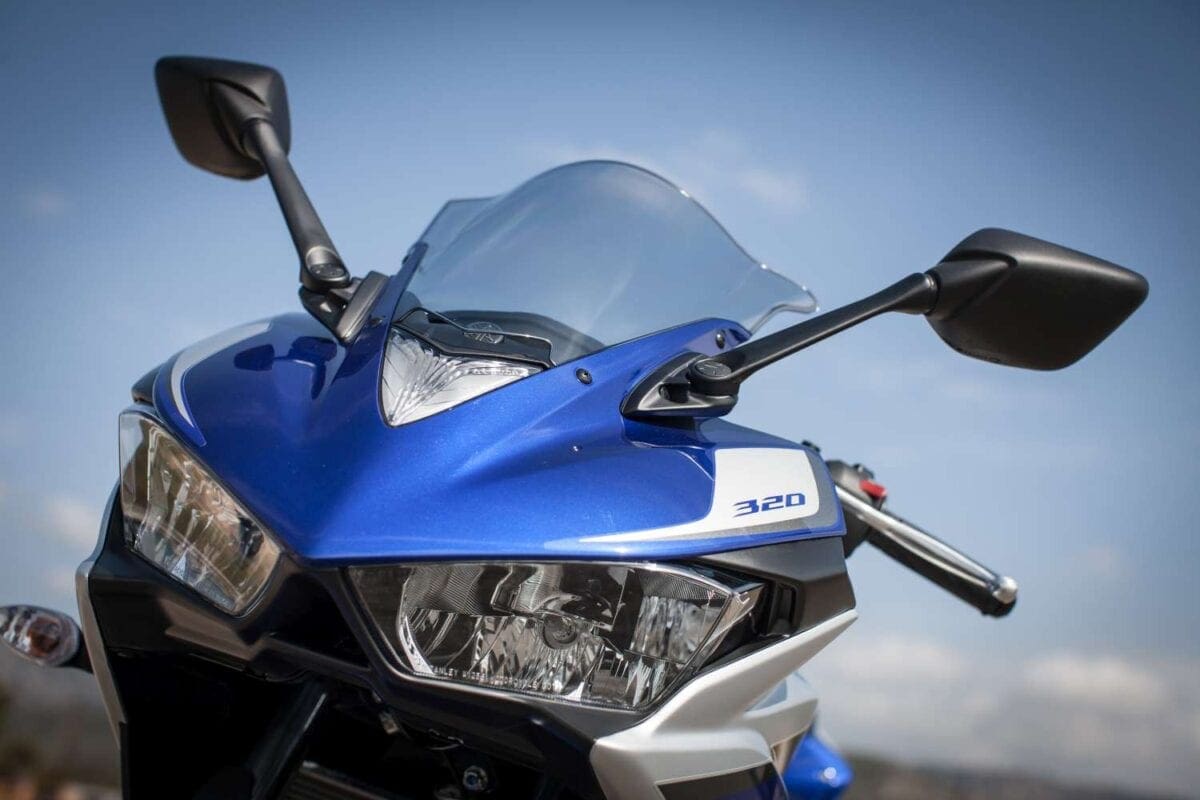 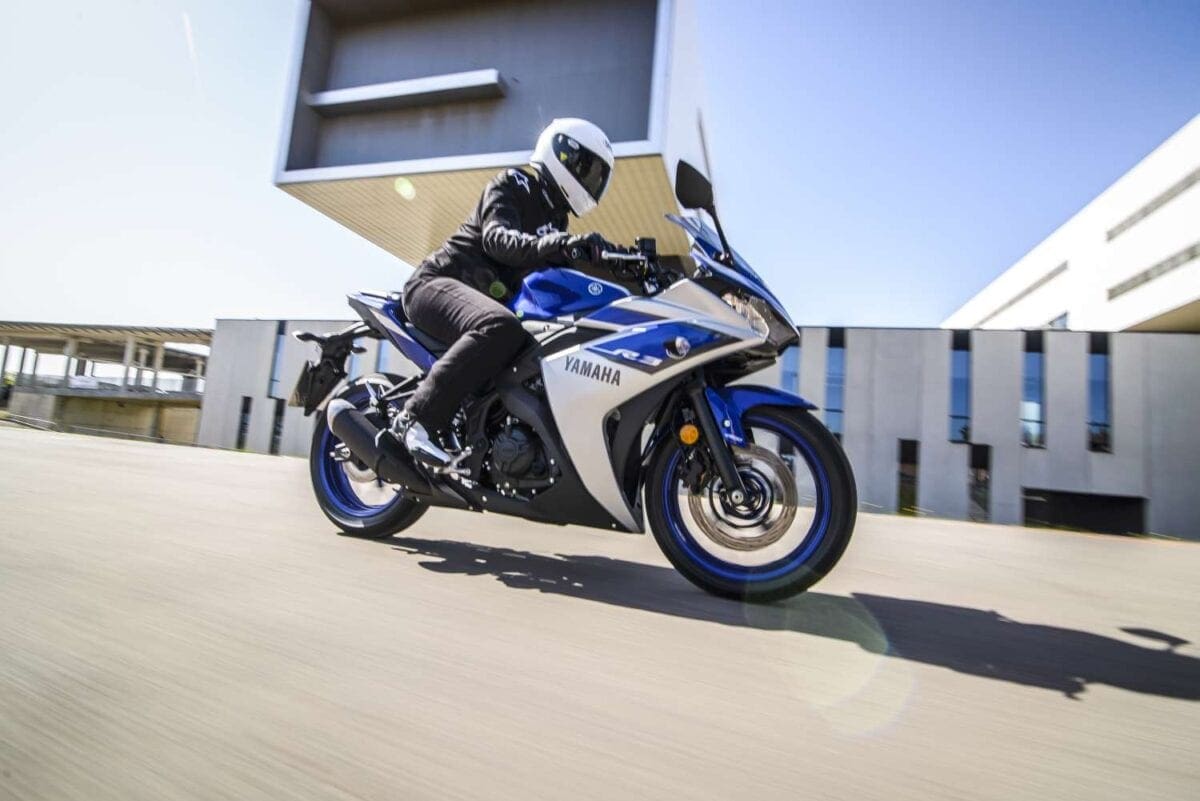