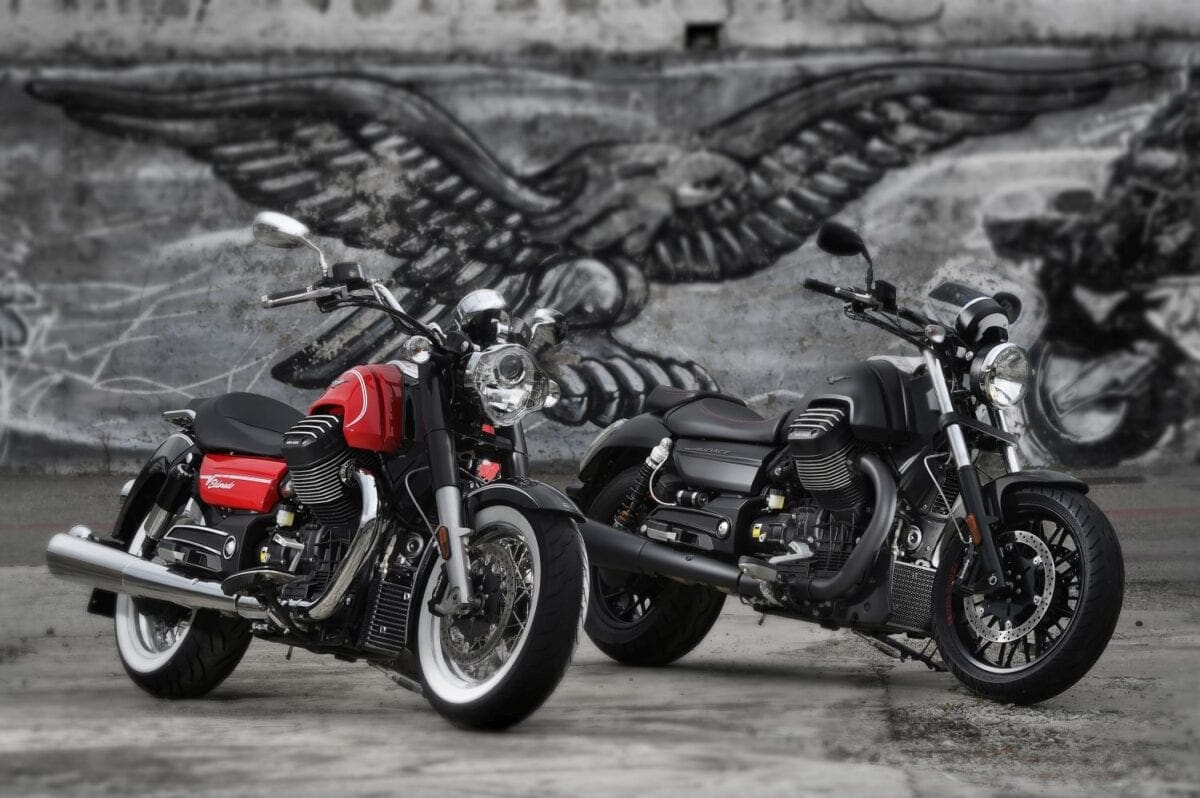 Both models are powered by a four-stroke, four valve, 1380cc, 90° V-twin – the largest V-twin made in Europe. It’s mounted on elasto-kinematic engine mounts, so that the engine effectively floats in the frame just likes the California launched in 2013, which means the vibrations from the thumping engine decrease once you’re on the move. 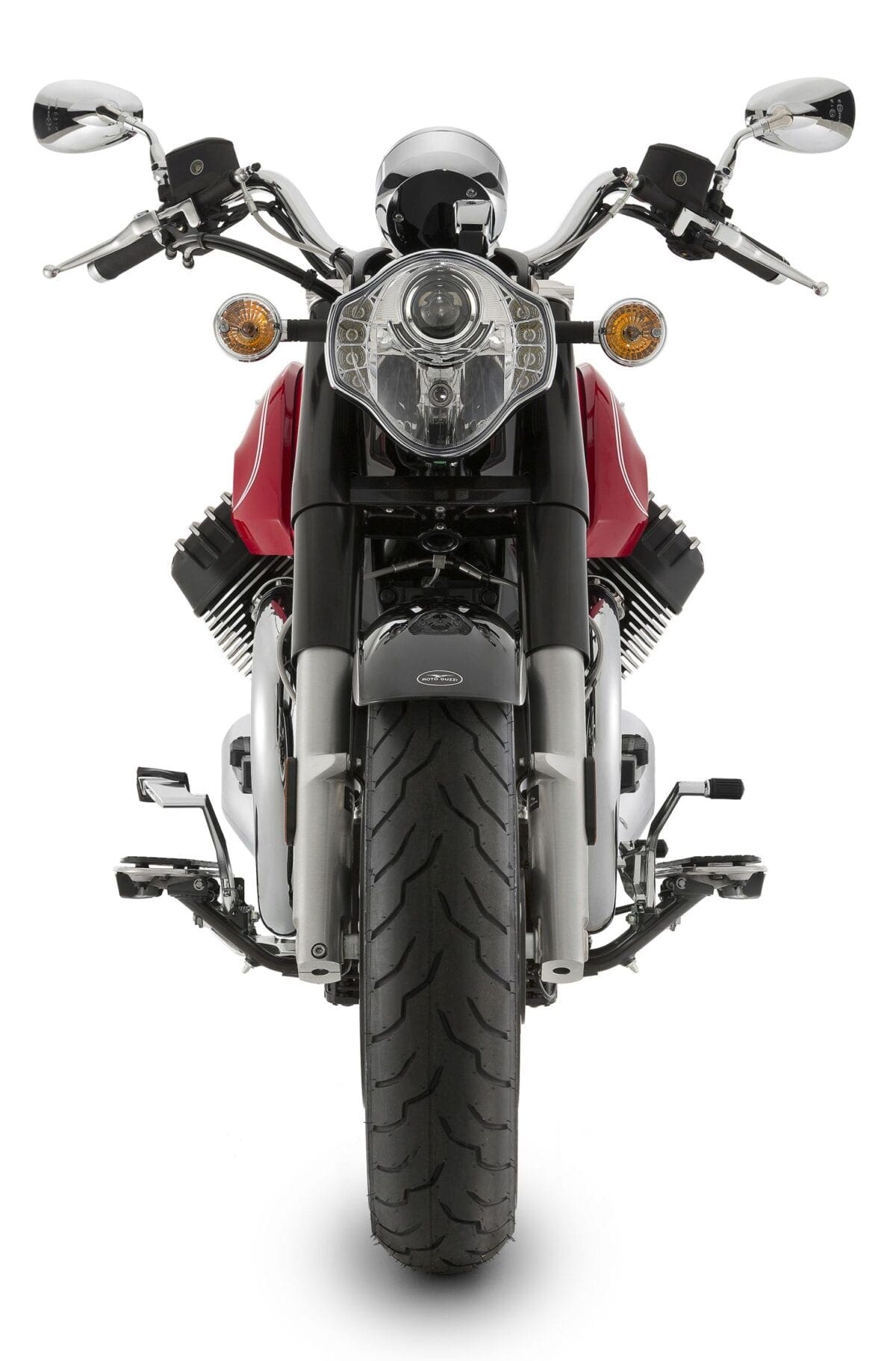 They’re both packed with modern tech – like the ride by wire system with three maps to choose from. Safety is for use when it’s wet as it doesn’t unleash all the power from the 1380cc motor, the comfort mode is good for every day riding and performance mode appeals to those who like a sporty and aggressive ride.

There’s three stage traction control too – indicated on the dashboard by numbers and changed using the main menu and mode button on the left switchgear. High grip and sport is number one and a good choice for those who like the back end to slip slightly, number two is normal and three is for use when it’s slippery.

Cruise control comes as standard on both machines and is activated by pressing a button the right hand switchgear. 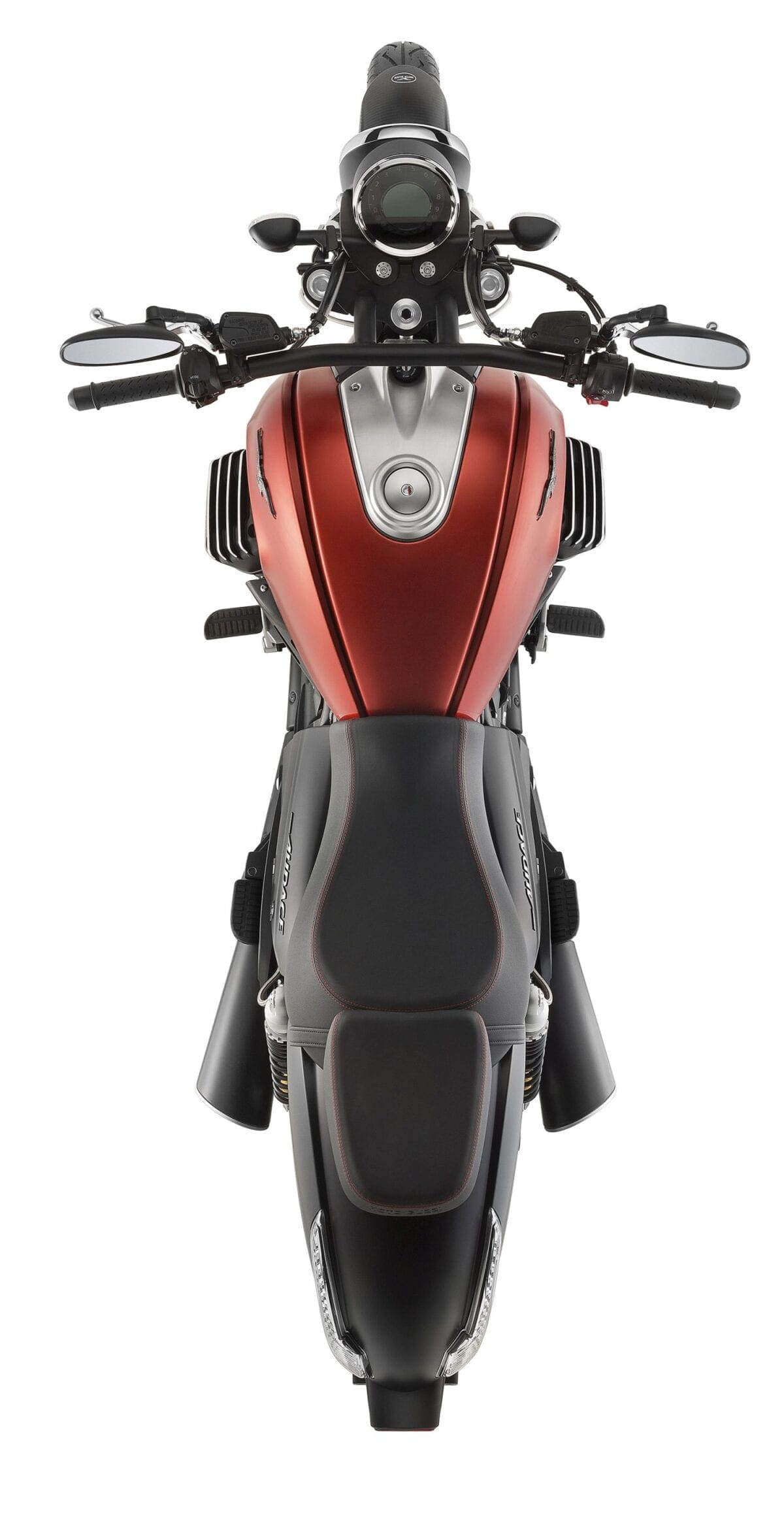 The six-speed gearbox on the two bikes goes in with a definitive clunk – and the toe-heel gear shifter on the Eldorado will appeal to touring types, although I didn’t use it though as I found it easier to just use the front lever. And because it’s shaft driven, this helps contribute to lower maintenance, running costs and mess.

Despite both being based around the California, they both have distinct differences – or different ‘souls’ as the Head of the Piaggio Group Advanced Design Center, Miguel Galluzzi, said.

They both house the epic V-twin in a stiff cradle frame, have a 740mm seat height – with 720mm option – dual ABS as standard, 20.5 litre tank and have 145mm trail – that’s 10mm less than on the Cali. However, despite all the similarities, they’re recognisably different.

The Audace – said ‘ow-dach-ee’ – has adjustable rear shocks, no grab-rail for a pillion, carbon front mudguard, painted headcovers, alloy black rims, footpegs instead of footboards and a short megaphone exhaust – which means Euro 4 regulations, a first for Moto Guzzi – and for the record it makes an awesome noise. It’s fitted with a 200/60 rear tyre, the Eldorado has a 180/65.

While the Eldorado has heated grips, a big wide comfortable seat, a heel-toe gear shifter, 16inch spoked rims fitted with whitewall tyres and appeals to the more ‘traditional’ Guzzi-ist’s with its pin-striping and chrome.

The circular dash on both models is neat and in keeping with the styling of the machines – but don’t be fooled as it’s packed with all the vitals, and a few extras. As well as showing your speed, revs, time, trip meters, odometer, average and current economy rating and all the usual warning lights, the dash tells you which riding mode you’re in and which traction control setting is being applied to your ride. 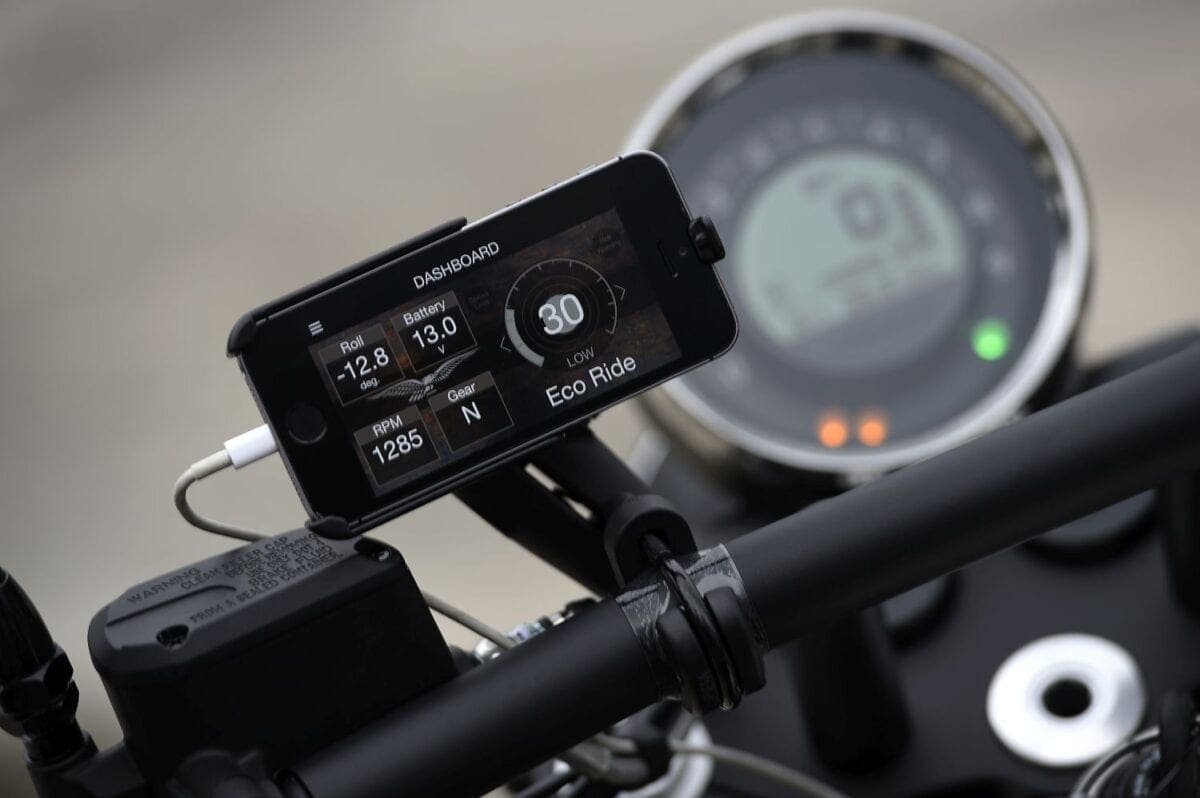 As seen on the Aprilia RSV4-RF and some new Vespas, the new Moto Guzzi’s have media platform connectivity and can be connected to your phone via a free app which means you can use your phone as another dashboard with a whole host of features including data-logging, shift light, eco ride indicators and it also has ‘Find my bike’.

If you’re a fan of a cool, laid back riding style with a comfortable riding position and a powerful engine then the Eldorado (£15,635) would be the choice for you. If you prefer a raw, aggressive ride and love the ‘blacked out’ style, then the Audace (£15,135) will steal your heart.

Both machines are in dealerships now and available in red and black – the Audace is in matt colours. 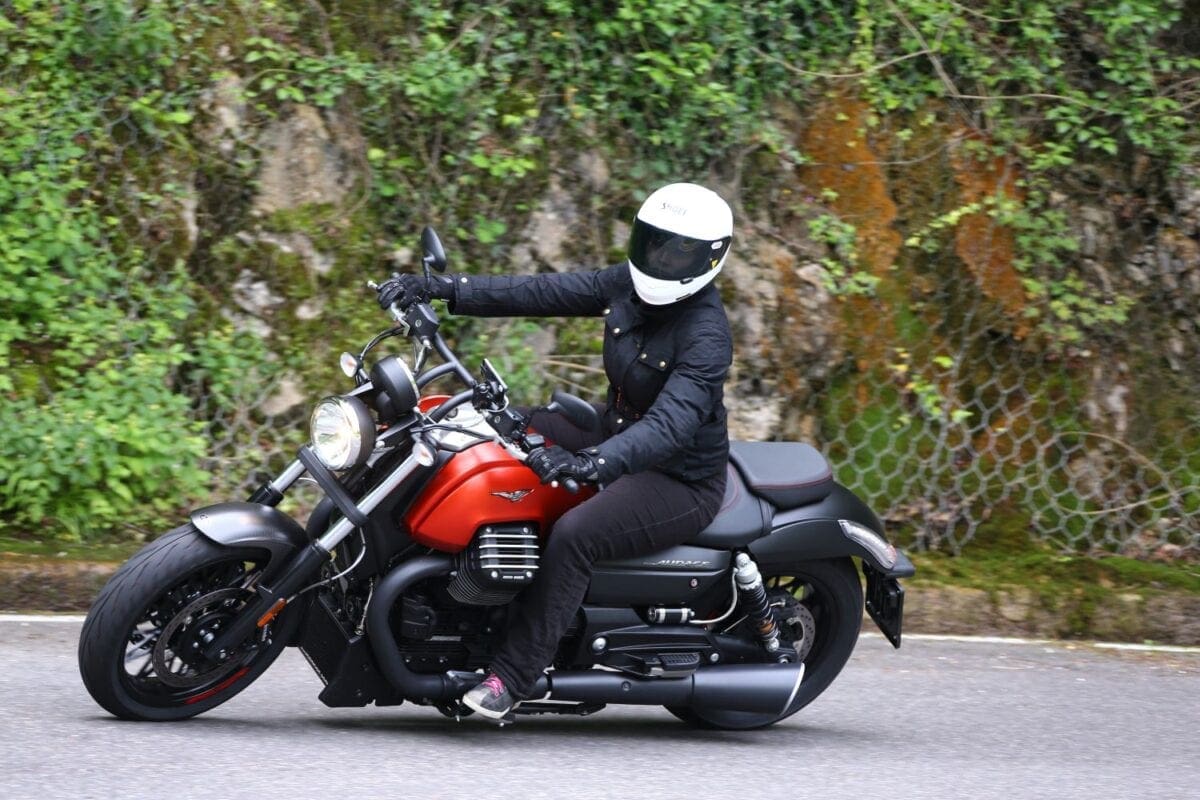 Gliding along the quite frankly patchy at best, Italian roads and looking out over onto Lake Como on the Eldorado, my mind wandered to taking a trip like this by myself and exploring where I wanted to go. The bull horn tapered handlebars and comfortable wide seat mean that you’re sat ‘right in’ the bike and feel connected. The feet-forward position was comfortable and because the footboards were big in comparison to my size five feet, I could choose where I wanted to put them to get comfy. The footboards fold up and have plastic sliders underneath for those ‘grinders’ amongst you.

The suspension ate up the bumps with ease with hardly any of them passed through into my derriere, in the corners the bike felt well placed and connected with the road. Despite going up a mountainous road with plenty of hairpin bends, both the Eldorado and Audace felt stable even when leant over – something Miguel Galluzzi has tried to maintain throughout the Guzzi range. 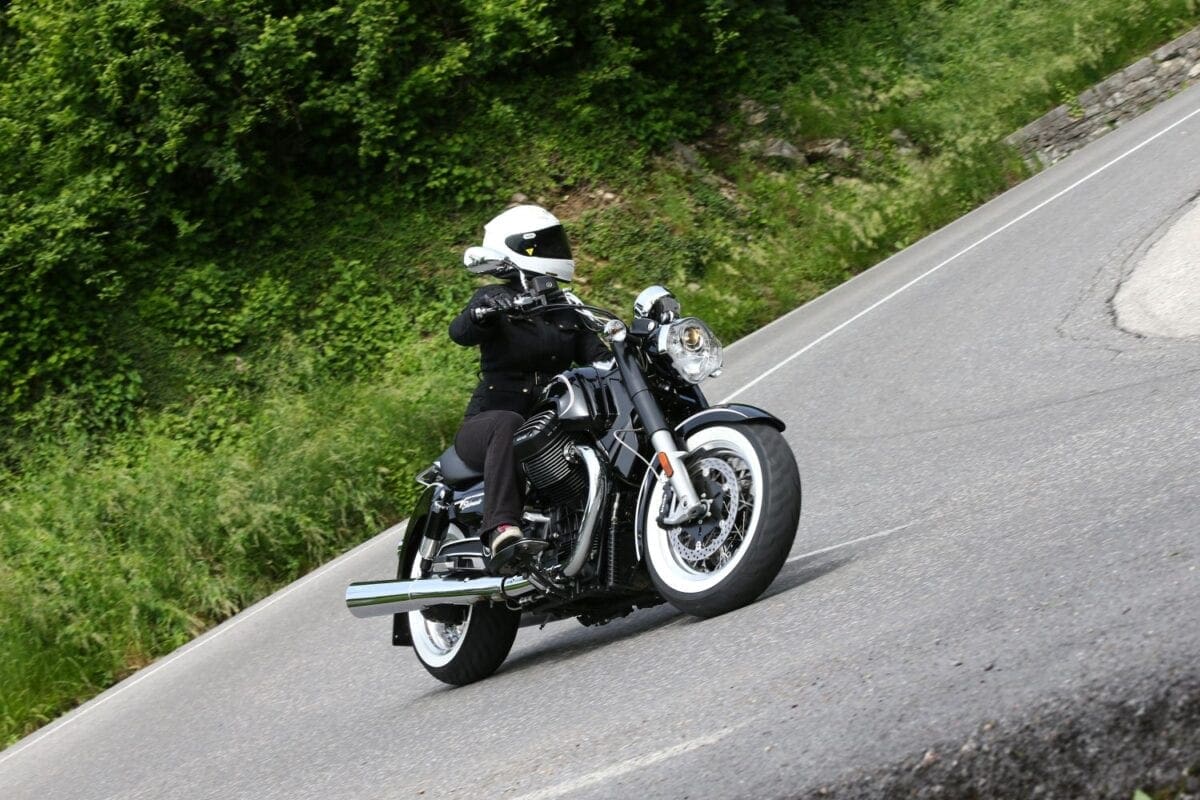 Hopping onto the Audace, I was amazed at just how different it felt in the sporty riding position. Despite it producing the same power, you feel as if you’re going a lot faster than on the Eldorado, although I was slightly stretched due to the drag style handlebar so wasn’t as comfortable. The noise from the newly developed exhaust is something else. I put the output mode on ‘Performance’ and opened the throttle.

The power isn’t scary as it’s delivered smoothly and is actually a lot more manageable than I expected it to be. What surprised me about the bike was how manageable a motorcycle that weighs five times more than me is to use on the road.

You may think that riding the Eldorado is not for you on the account that it’s a hulk of a machine. So did I, until I tried one out. I’d ridden the V7 before but never thought that a 314kg cruiser would be a manageable prospect for me – but it was.

The Eldorado’s modest seat height, combined with its low centre of gravity and friendly (but potentially) fiery engine make it an appealing machine. Once rolling, as expected, the weight just disappears and when coming to a stop, you can easily get your feet down as there aren’t any footpegs or air filters getting in your way.

The sturdy side stand gives you confidence and the bike doesn’t lean over that far when it’s on it so you don’t feel like you’re about to drop it.

As with any new machine, it takes some getting used to but if you want to ride something then give it a go.