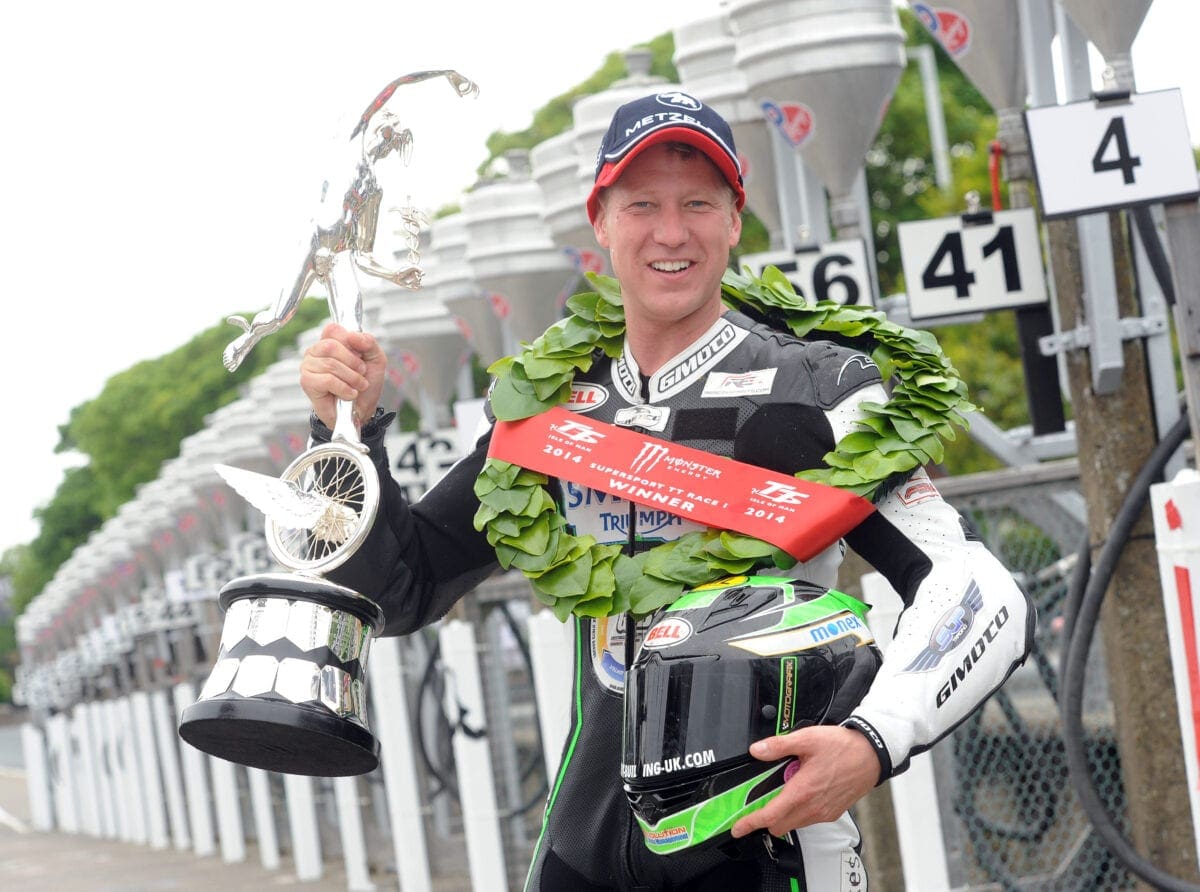 PACEMAKER BELFAST 02/06/2014: Gary Johnson (Smiths Triumph) celebrates after winning the Monster Energy Supersport race one the race at the 2014 Isle of Man TT

The 2015 Isle of Man TT kicks off this weekend and Metzeler heads to the island with its strongest line up of riders ready to challenge for victory around the 37 ¾ mile circuit.

The tyre brand of German origins enjoyed a highly successful start to their 2015 road racing season with three wins and multiple podiums at the North West 200, including victory in the Superbike and Supersport races. With the Isle of Man TT kicking off this weekend, Metzeler will be looking to repeat that success with a star rider line-up including the Tyco BMW duo of Guy Martin and William Dunlop, GBmoto Kawasaki and Mar-train rider Gary Johnson (pictured), PBM Kawasaki ace Ian Hutchinson, Dean Harrison (Mar-train Yamaha), James Hillier (Quattro Plant Kawasaki) and Michael Rutter (Penz13 BMW and SMT Kawasaki).

Those riders competing in the Supersport and Superstock classes will use the treaded, road legal Metzeler RACETEC RR tyres whilst in the Superbike and blue-riband Senior races, they will utilise the RACETEC Slick.

As one of the most iconic motorsport events in the world, the Isle of Man TT is a legendary two week festival that sees riders compete against the clock around the 37 ¾ mile closed roads circuit at an average speed of over 130mph. With high sustained speeds, coupled with fast sweeping corners and slow hairpins, tyre performance and grip is crucial for a good overall time.

Once again competing with Metzeler is the ever-popular Guy Martin and his Tyco BMW team-mate William Dunlop. Following a strong start to his Roads campaign in 2015, including victory at the Cookstown 100 races, Guy is looking to claim that elusive first TT win in 2015 and is confident Metzeler will help him secure it, “Racing is all about confidence isn’t it and I need confidence in my tyres as much as anything. The guys at Metzeler have worked real hard to build some good, confidence inspiring tyres over the last few years, so I’m very happy to be using them. The TT isn’t like a short circuit, you need edge grip, stability and at the end of the races; durability – their rubber gives me all that. No excuses, bike, tyres and me…we’re ready for what will be!”

Having enjoyed victory in the Supersport race last year using the RACETEC RR tyres, Gary Johnson will be challenging for honours in the Superbike, Superstock and Senior races with the new GBmoto Racing Kawasaki squad and in Supersport with Mar-train Yamaha. Gary is equally confident he has what it takes to take a ‘big bike’ win this year. Speaking before the TT fortnight he said, “The TT is an incredible event and there is nothing else like it on the planet. Tyres are one of the most crucial parts of the machine around here, and you have to have complete confidence in what you’re riding – particularly on the beginning of the opening lap at places such as Ballagarey where you’re flat out in sixth with a fresh set of tyres and full tank. Thankfully, the Metzeler tyres have been faultless in terms of grip and I’ve always had such confidence in them from the very beginning of the race.

“In the Supersport race last year, the treaded RACETEC RR tyres were incredible and even with the slightly mixed conditions they were consistent throughout the whole race which enabled me to keep pushing throughout and control my lead to the flag.”

Following some years of battling back from injury, PBM rider Ian Hutchinson proved he was finally back to his best at the North West 200 with front running pace and podium success. Remaining the only man to ever win five TT races in a week, 2015 looks set to be ‘Hutchy’s’ best chance of returning to the podium, which will undoubtedly prove popular with the thousands of fans who will pack the course and the watching millions on TV around the world.

Mar-train Yamaha star Dean Harrison will be looking to build on his Supertwin victory in 2014 as he competes on the all-new Yamaha YZF-R1  in the Superbike and Senior races, and the tried and tested YZF-R6 in Supersport. James Hillier will be looking to return to his winning ways on his stable of Quattro Plant Kawasaki machinery whilst TT stalwart Michael Rutter will be mounted on Penz13 BMW and SMT Kawasaki machinery.

MetzelerR UK Marketing Manager Simon Carter said: “With a strong set of results in Road Racing already this year, we head to the Island in an incredibly strong position. Metzeler has already enjoyed success around the challenging course and with Martin, Dunlop, Johnson, Hutchinson, Harrison, Hillier and Rutter all fired up for this year, I’m very confident we’ll be seeing further podiums over the course of race week.

“Of course it’s not just on track where we will be having a strong presence. We’re once again returning with our special Metzeler Village, which places fans directly in the heart of the action with an exclusive campsite next to the famous Quarterbridge corner. Our guests can look forward to a great week, with the opportunity to meet some of our riders at an exclusive “Riders Night” in the Metzeler village.

To find out more visit www.metzelervillage.co.uk

Metzeler is also currently running a promotion which gives buyers of a set of ROADTEC Z8 INTERACT tyres a £50 voucher towards any Dainese products. The promotion is valid for tyres (purchased and fitted from 1st April 2015 to 31st July 2015 inclusive). To find out more about the full range of tyres and activities from METZELER visit www.metzeler.co.uk and Facebook page at www.facebook.com/metzeleruk