Jorge Lorenzo stormed to a flawless victory at the Mugello round of the MotoGP championship, the fifth win of the year of the factory Yamaha team.

His flamboyant teeam-mate, and local hero, Valentino Rossi also battled his way onto podium. He secured third in a hard fought race, making it his sixth consecutive podium. But the nine-time world champion fired a shot across the bows of his team, saying that: “We need to improve.” 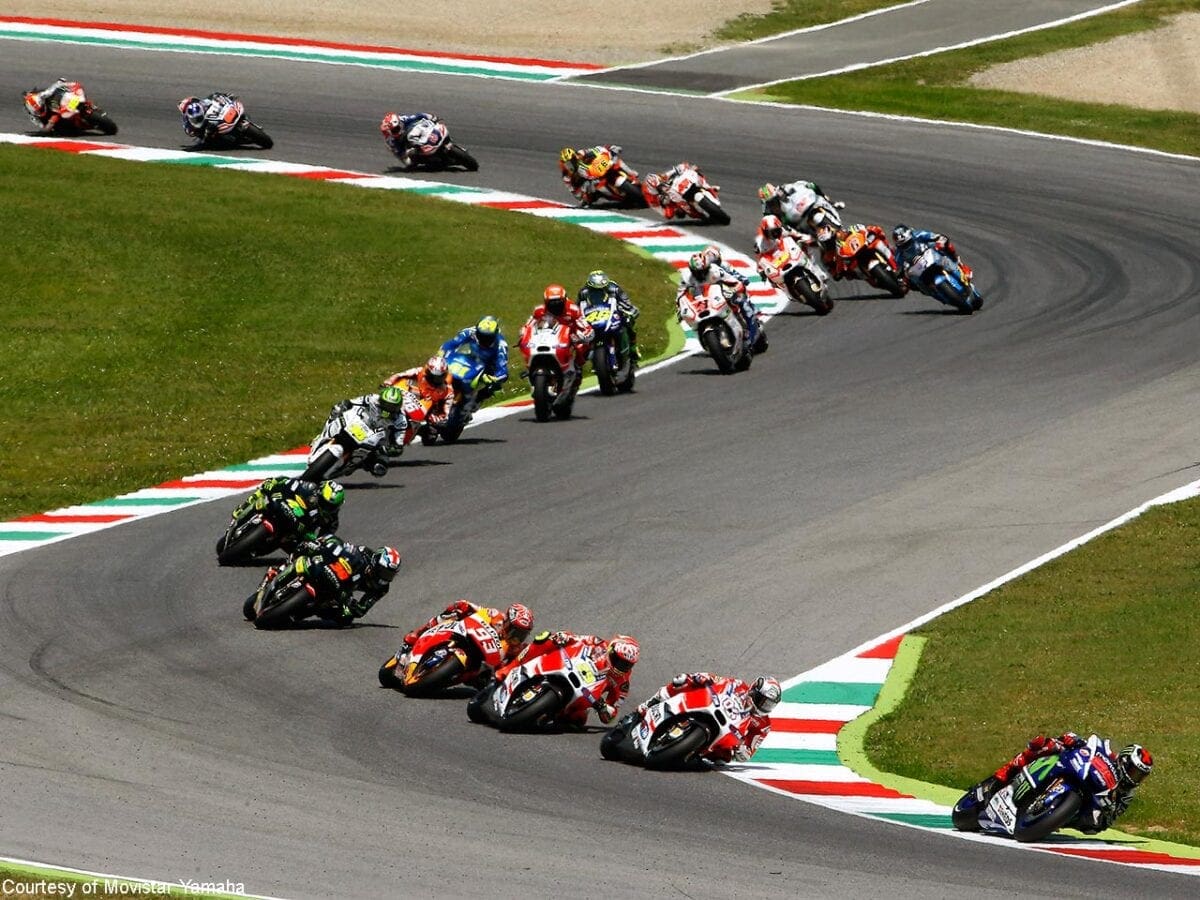 After a flying start from second on the grid, Lorenzo tucked in behind Andrea Iannone and Andrea Dovizioso to quickly make his intentions clear. He moved up from third to lead the way when he crossed the line for the first time. With a clear track ahead of him, the race went exactly as he planned. As his pit board signaled rival Marc Marquez‘s approach, he put the hammer down, setting a 1‘47.700, the fastest lap of race.

He gradually built a gap and remained untouchable for the rest of the race. Riding consistent laps in the low 1‘48s the Spaniard finished his perfect performance at the team‘s home GP with a 5.563s advantage. This win is Lorenzo‘s third win at the Mugello circuit in four years‘ time.

Starting from eighth on the grid, teammate Rossi lost time when he got caught up in the pack and finished the first lap in ninth. He quickly made his way through the field, hunting for Cal Crutchlow riding in sixth and overtaking him on lap eight. It took The Doctor four laps to close down a 2.5s gap to the group battling for second place. He immediately passed Dovizioso for fifth and went on chasing Dani Pedrosa, Marquez and Iannone.

Rossi had his mind set on the podium and, having watched Marquez crash out, he was quick to make a move on Pedrosa for third. He pushed hard to close in on Iannone, setting a personal best of 1.48.173, but was unable to catch his compatriot and secured the last podium place, 6.661s from his teammate, accomplishing a third consecutive double podium for Yamaha.

Lorenzo‘s 25 point score adds to his total of 112 points, keeping him in second position in the standings. He is six points behind teammate and championship leader Rossi, whose 16 points put him on 118 points.

After the race, Lorenzo said: “I‘m very happy, because I didn‘t expect to escape with such a big margin, but sometimes it happens that you feel great on the bike.

“If someone would have told me before Jerez that I would win three races in a row I wouldn‘t have believed it, but this is what happened. We are in a great shape; Valentino is getting podiums in every race so that means he is strong and also the bike is working really well. It seems that this year could be our year, so we have to take advantage of it. It was a different situation when I was twenty-nine points behind than now when it‘s down to six, but even like that it‘s difficult to close in on Valentino in points because he is always on the podium.

“Today Iannone stayed in front of him so it‘s four points more and as I said six points difference is much better than twenty-nine, but we can‘t relax and neither can Yamaha. Our competitors are working really hard to fix the problems they seem to have with the stability of their bikes and they will arrive at a point that they will win races, but until then we need to make the most of our potential to improve the bike little by little.”

Rossi added: “Mugello was very busy, because I am very competitive and all the Italian fans expected a great race from me. It‘s a bit of a shame that it wasn‘t a fantastic race. I wasn‘t strong enough but at the end of the race I arrived on the podium after a great recovery and a hard race.

“To be on the podium with whole the crowd is always magical with the track being full of people. I‘ve been suffering the whole weekend, I was never strong and didn‘t achieve a good level of speed. In the race I also suffered a lot, especially on the first lap. I think we have to improve, especially with Jorge being very strong, he is in a great shape and to match his level we need to be more competitive.”