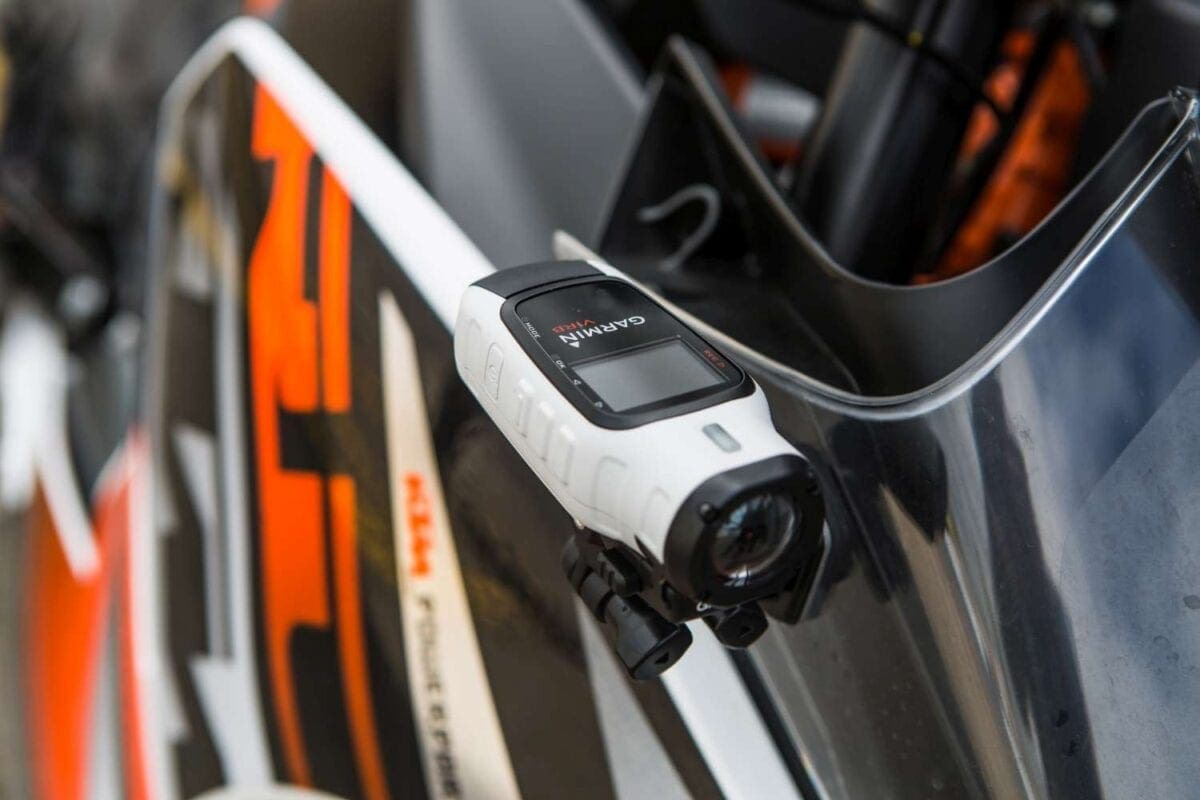 A few years ago, there wasn’t that much choice when it came to action cameras – it was GoPro’s and that was it. However, with a number of new models on the market, the choice has opened up and there’s plenty to choose from. Garmin has launched the VIRB and VIRB Elite action camera – but how would it cope as a camera for motorcyclists?

We like video content here on MoreBikes.co.uk and try our best to get as much on-board footage as we can – so what better way to test what we think of the new Garmin VIRB Elite. You can buy the camera for £219.99, but different packages are available with bundles of accessories included in the box. We chose the cycling bundle, priced at £249.99, which included: camera, battery, USB cable, instructions, MicroSD 16GB card, cradle, short link, right angle link, flat surface mount, curved surface mount, removable flange base, threaded collar, three knobs, adjustable mounting arm kit, mount base kit (curved and flat), handlebar mount, vented helmet strap mount – phew! 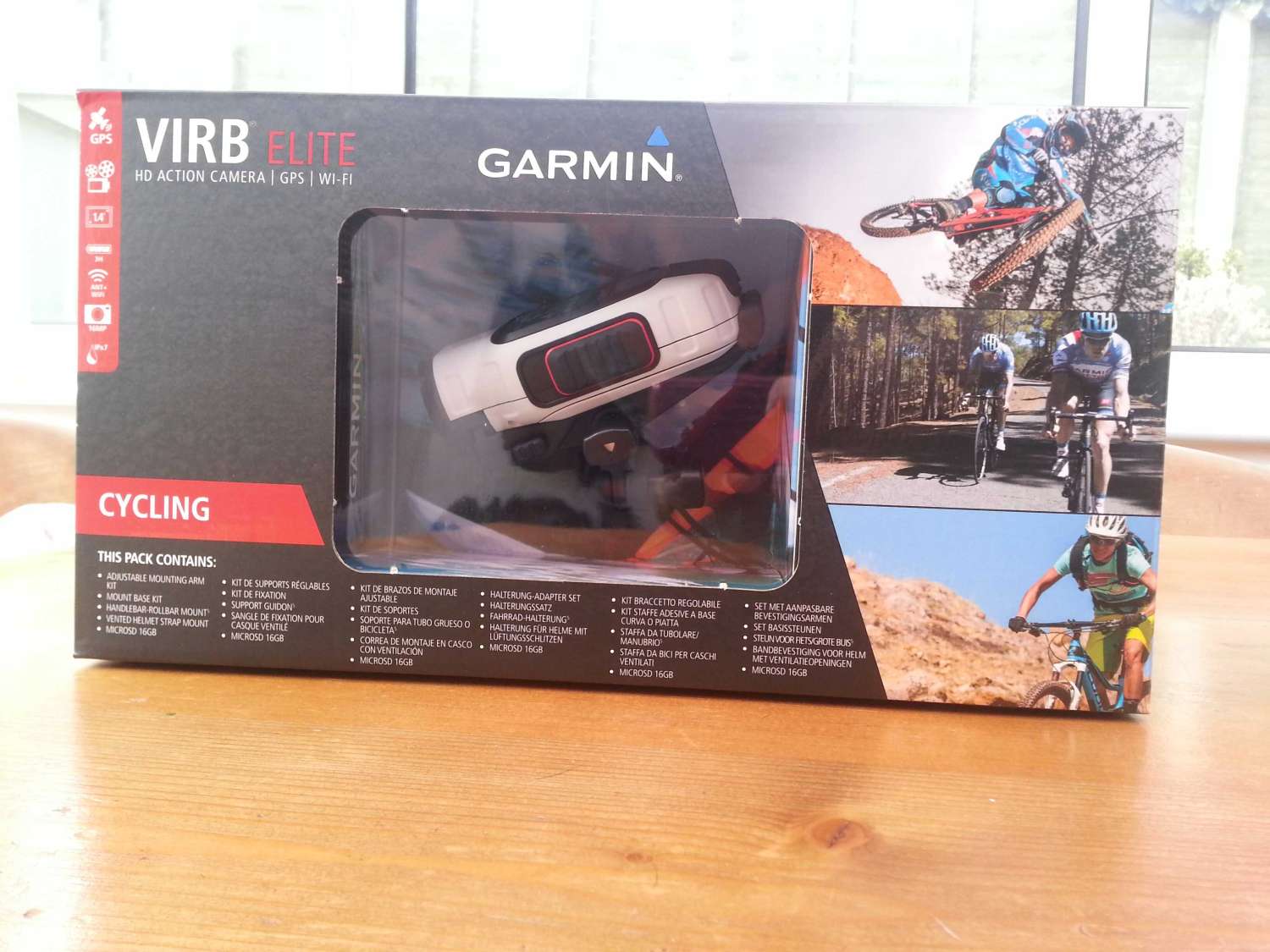 I’ll admit, I’m not the best with technology – so action cameras tend to scare me slightly, I like something that I can point and shoot. It helps to be able to see what you’re doing properly – the Garmin VIRB has a nice large 1.4” display where you can flick through the menu, playback videos and look through pictures you’ve taken and see just where you’re shooting. Sometimes with other popular action cameras which don’t have a screen, you start it recording but can’t tell what shot you’re getting – quite often I get back, look at the footage and I’m disappointed as I wanted it slightly to the left or right – not with the VIRB Elite. You get digital image stabilisation as standard too. 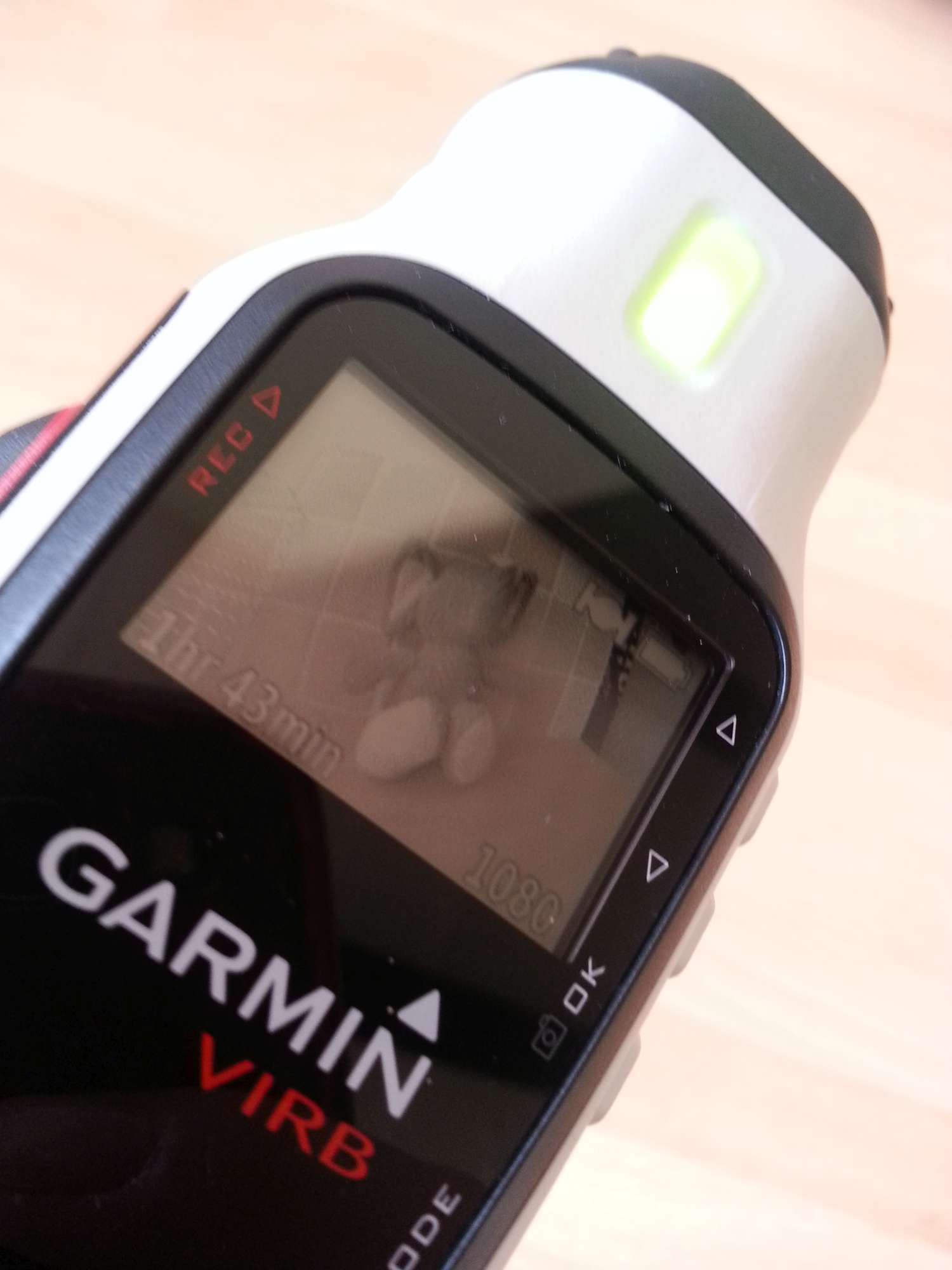 Size-wise it’s (HxWxD) 1.26 x 2.09 x 4.37″ and weighs 236g with the battery, cradle and flat mount assembly – so it’s not difficult to find somewhere to mount it either on the bike or the side of your helmet and it doesn’t drag your head off to one side either. 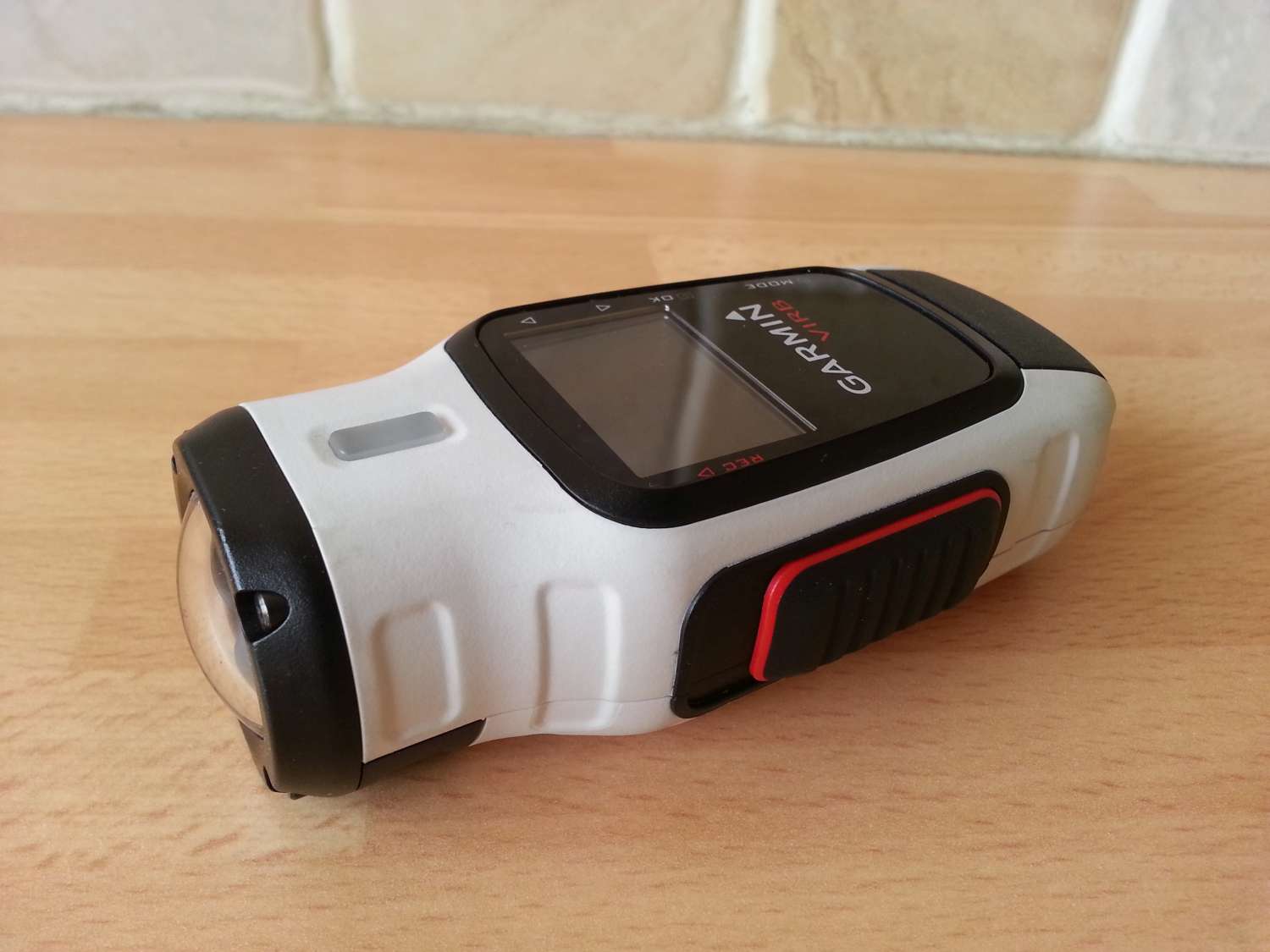 It’s simple to use. There’s a clear on and off button on the right hand side which you press once to power it up or alternatively, slide the large record button on the side and it will switch on and start recording straight away. 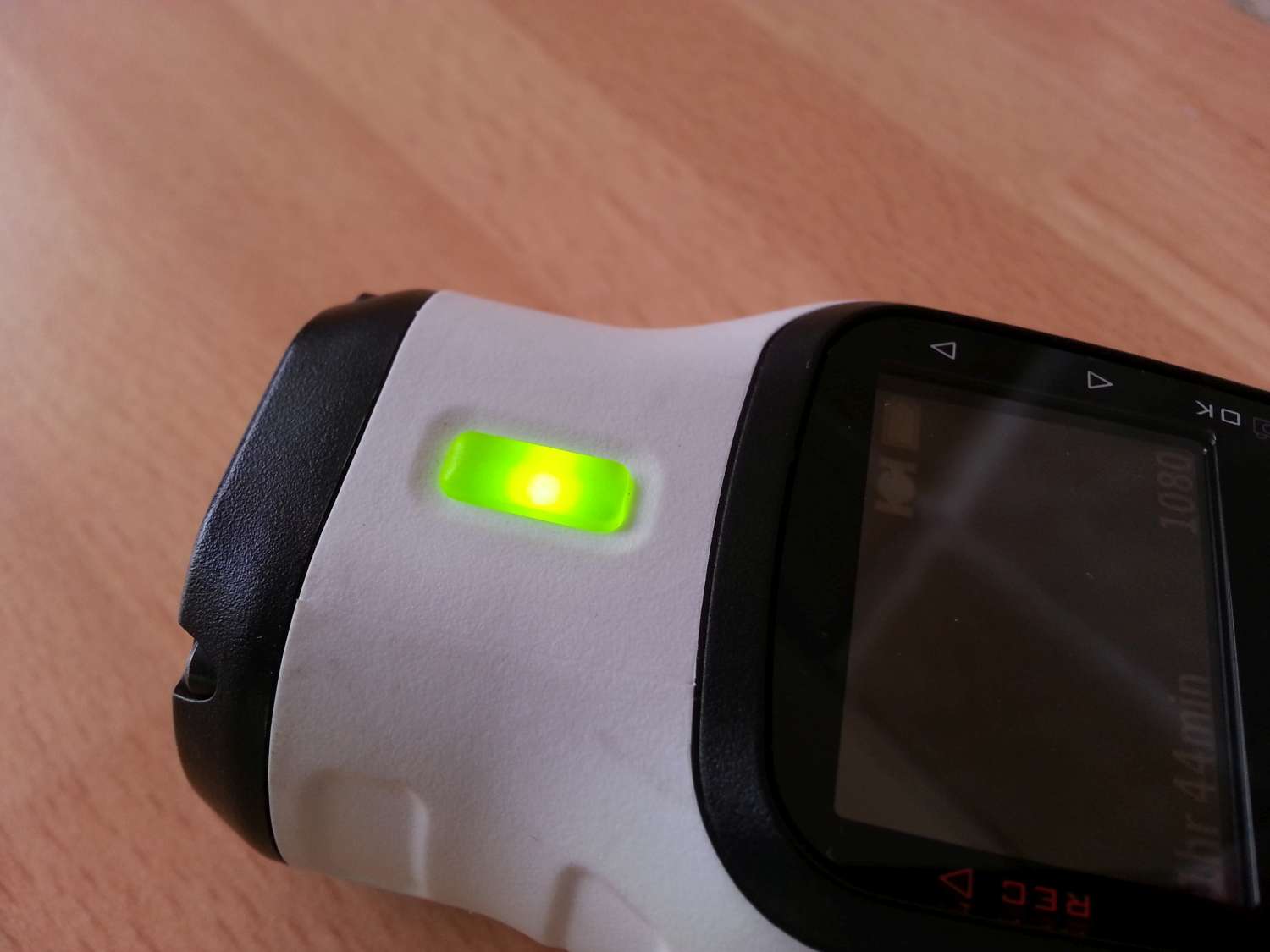 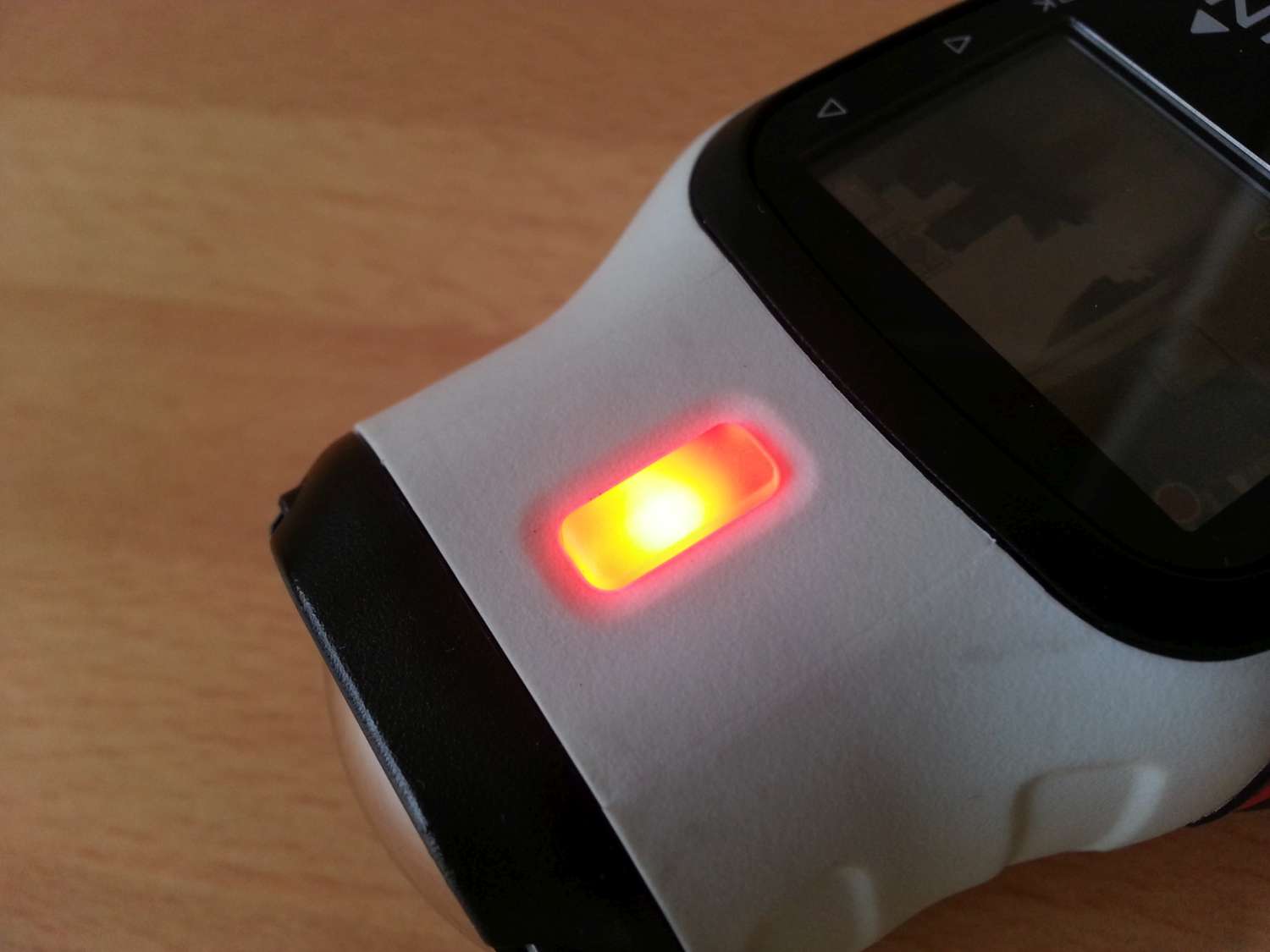 You can take pictures easily and with the camera on ‘video’ mode as there is a separate button – the OK button – which you simply press to take the shot.

Some popular mounts for other brands of camera mean that you sometimes have to have a screwdriver to change the mounts – not with the Garmin, simply turn the knobs with your hands.  Also, you can take it in and out of the cradle with a gloved hand. 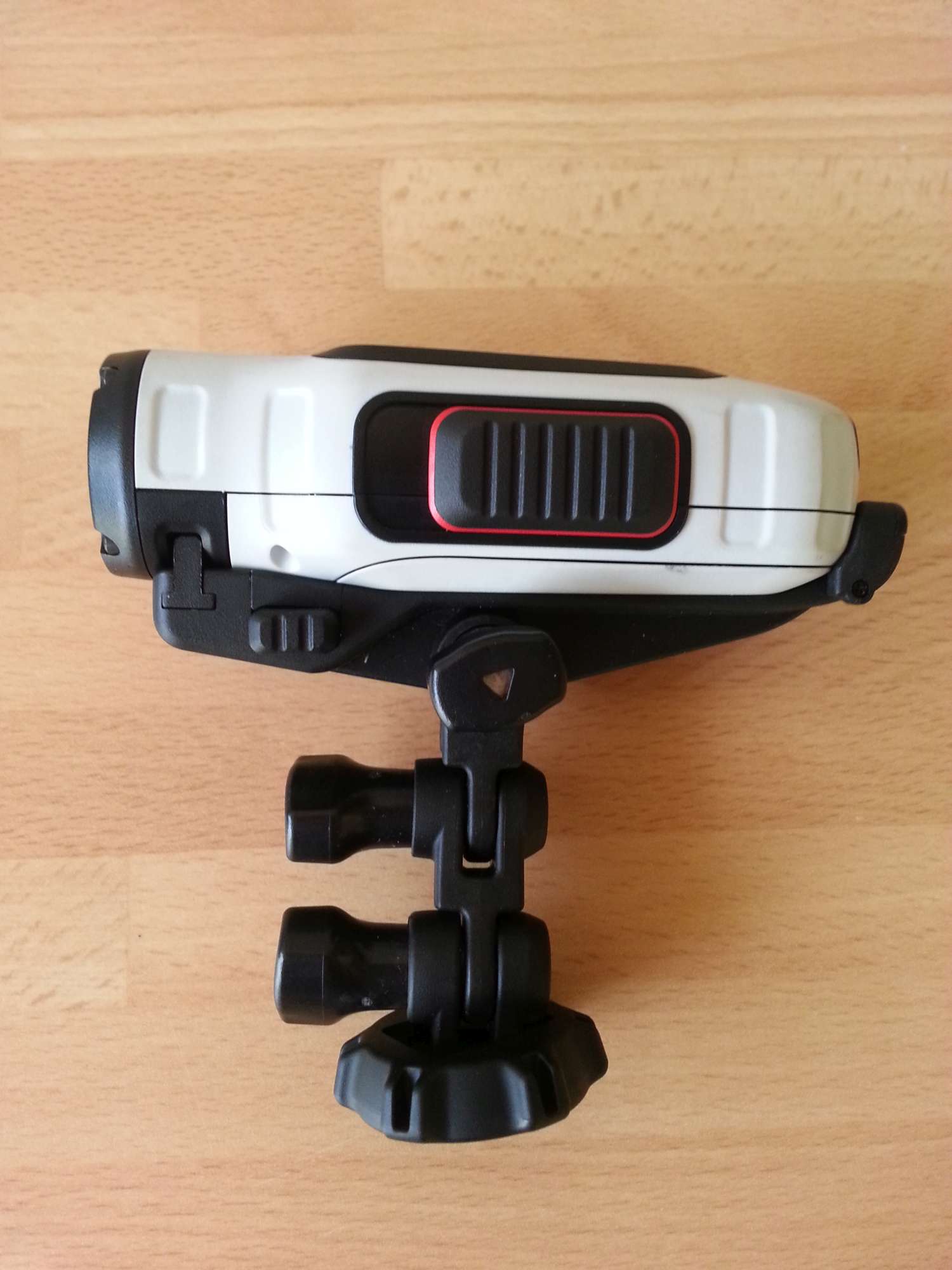 If you want to edit the video once you’ve shot it, then you can download the free editing software from Garmin. If you don’t want to then simply upload the footage straight to YouTube or your Facebook page to impress your mates. It records onto a micro SD card – which comes included in the box along with a micro SD adapter so that you can plug it into your computer and drag the files off.

For those techie people amongst us, the VIRB Elite can be integrated with a number of different sensors to measure speed, heart rate, g-force, amongst others, has burst mode, self-timer mode and a dedicated time lapse setting which allows you to specific an interval and the camera will automatically compile the video together.

Switch on the wifi function from the main menu and you can connect the camera to your iPhone or Android device through an app – this allows you to change all the settings on the phone rather than the camera.

There are a whole host of accessories – vests, helmet straps, dashboard mounts and even a harness for a dog – so the possibilities of what you can film are endless….

Overall, I’m massively impressed by the VIRB Elite and I’m looking forward to playing with it even more.

Here’s an onboard lap recorded on the Garmin VIRB Elite: