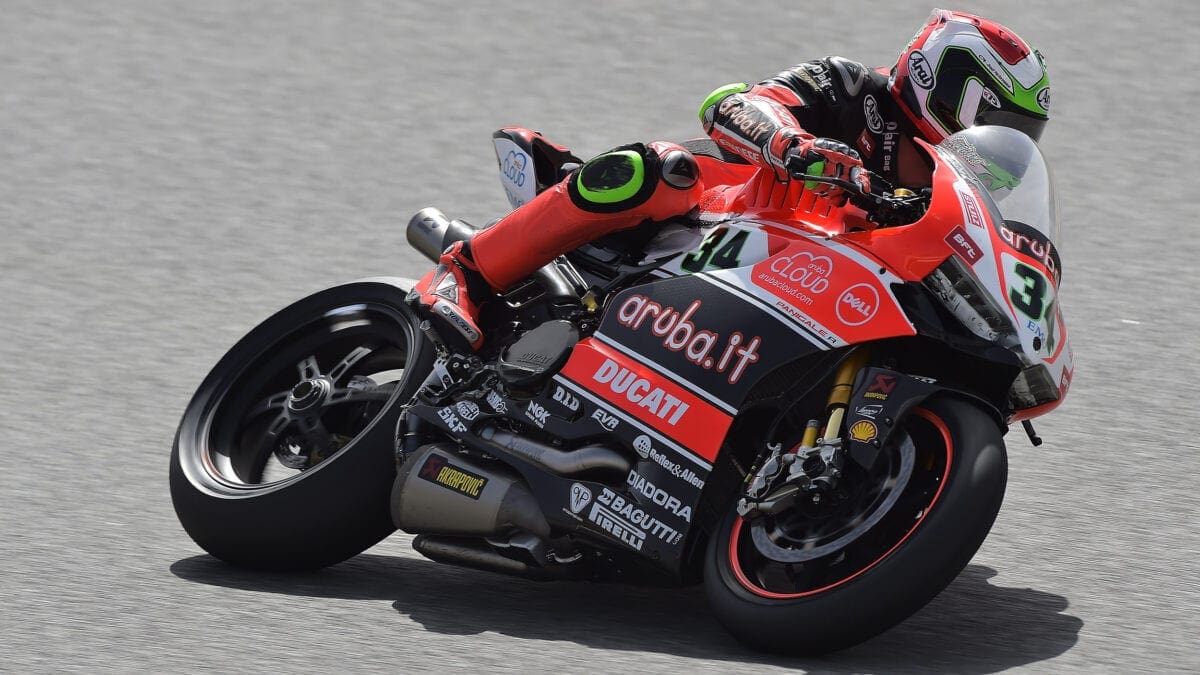 Following the Nilox Portuguese Round which brought the curtain down on the first half of the 2015 eni FIM Superbike World Championship season, the riders were back in action on Monday for seven hours of testing.

Fresh from his Tissot-Superpole on Saturday, it was Davide Giugliano who led the way with a leading lap time of 1’42.346 – three tenths of a second quicker than the best race rubber lap time of the weekend from Jonathan Rea. Aruba.it Racing-Ducati SBK Team partner Chaz Davies was sixth quickest, concentrating on further development with the new exhaust. Incidentally, Giugliano continued to feel the affects of flu but was still able to post the fastest lap of the day.

Kawasaki Racing Team filled spots two and three, with World Champion Jonathan Rea ahead of team-mate Tom Sykes. With Sykes’ issues of Sunday having been diagnosed as a sensor problem in Race 1 and a damaged wheel rim (apparent from around the eighth or ninth lap) in Race 2, Monday featured much work on engine, electronics and suspension geometry; unlike over the race weekend, there was now enough time to carry out back-to-back comparisons on suspensions.

Many of the riders focused on their own programmes in the morning before moving on to tyre work in the afternoon, following a one-hour break in track activity. Pirelli rolled out a mammoth 13 new compounds (five front and eight rear); with not enough time available to test all of them, riders were required to decide which compounds they were most willing to sample across the course of the day. Conditions fluctuated between bright sunshine and more overcast spells, with track temperatures reaching some 40 degrees Celsius on what is the southernmost tip of Portugal.

Leon Haslam (Aprilia Racing Team – Red Devils) was fourth overall, leaving team-mate Jordi Torres to undertake most of the tyre development in order for the British rider to have a lighter workload as he continued to feel the affects of his rib injury, worsened by a high-speed crash in Sunday’s first race. Therefore Haslam focused on chassis work while Torres ran a new rear shock.

The top five was completed by Voltcom Crescent Suzuki’s Alex Lowes, feeling far more comfortable as he and the team made significant strides with its Magneti Marelli electronics package. Team-mate Randy de Puniet was less fortunate; although his best lap time on a race tyre was half a second quicker than his leading effort on Superpole rubber two days earlier, the Frenchman twice parked up his bike due to technical problems in the morning.

Althea Racing had a busy day for more reasons than one. Nico Terol’s entry to the test was modified at late notice, with it being made official at the end of the day that the former Grand Prix World Champion has now parted company with the squad. A full-time replacement is yet to be announced, while in the meantime the bike was ridden by Althea Superstock 1000 rider Raffaele de Rosa. On the other side of the garage Matteo Baiocco was all smiles, fully confident that advancements have been made with the electrically operated traction control and engine braking systems.

Numerous riders had good reason to be pleased. At MV Agusta, Leon Camier overcame early problems to put in a strong run, simultaneously looking into a new rear link and rear swingarm. New electronics strategies pleased both rider and team, with Camier now feeling more confident as he applies the throttle as well as enjoying better engine braking. Further along the pit lane, Team Pedercini analysed new front and rear suspensions; David Salom found two to be particularly to his liking and will continue to trial them at Misano next weekend. Like the aforementioned Baiocco, Majorcan Salom spent the latter part of the day surveying the action trackside as other riders elected to take the chequered flag at 5pm local time (GMT +1).

A total of 19 riders were on-track. This included reigning World Champion Sylvain Guintoli and Michael van der Mark, as the Pata Honda World Superbike Team tested a new rear shock linkage and a new swingarm as well as continuing with its electronics development work. There were no-shows for Niccolo Canepa and Santiago Barragan, as the Grillini SBK Team did not test, and also for Leandro Mercado as the Barni Racing Team outfit had no new parts to try.

The WorldSBK field will now rest up before blasting back into action next Friday for opening free practice ahead of the Riviera di Rimini Round at Misano World Circuit Marco Simoncelli.