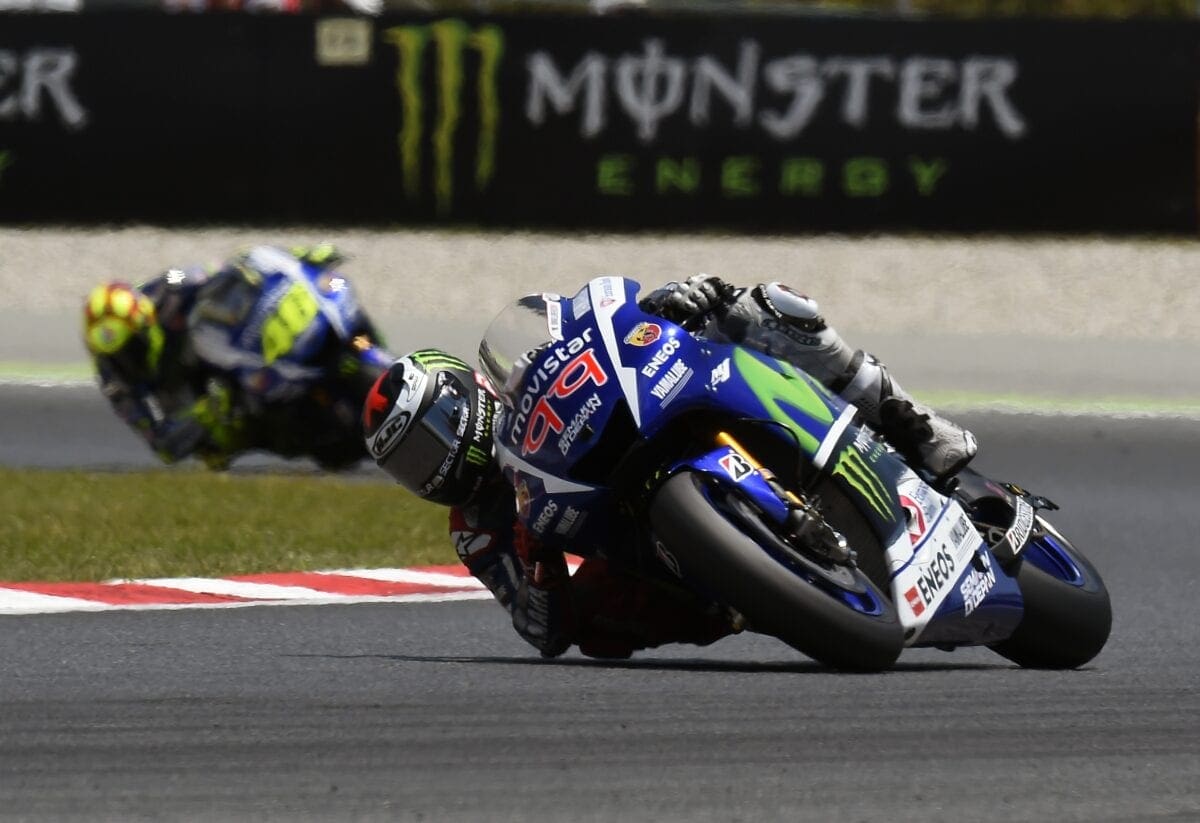 Jorge Lorenzo took a sensational fourth consecutive win for the first time in his career in front of a massive home crowd at Montmeló is Spain. Similar to the previous MotoGP round, he led the race from start to finish, which means he set a new record for consecutive laps led in the MotoGP class with an incredible total of 103 laps.

Lorenzo had a strong launch from third on the grid to take the holeshot. Leading the race from Marquez he put the hammer down in an effort to break away from the field, but was unable to shake off his compatriot. Unfazed by the pressure from his rival, Lorenzo kept his riding smooth and consistent, which proved to be the key to success. With 23 laps to go, Marquez made a mistake in turn ten, nearly clipping Lorenzo‘s YZR-M1 in the process, and crashed out of the race.

The dramatic crash put Lorenzo in his favorite racing position; completely in control at the front, with a clear track as far as the eye could see, and a growing gap to the rider in second, which was none other than his teammate. Rossi wasn‘t able to threaten until the last six laps, but Lorenzo managed the gap perfectly and held on to claim the victory in front of his home fans, with a 0,855s margin over the line. Accompanied on the podium by Yamaha Motor Co., Ltd’s President, Hiroyuki Yanagi, Lorenzo got to step onto the top step for the fourth time in a row for the first time in his career.

The Doctor started his Catalunya attack well, but found himself in seventh place going into turn one. Determined to score a top result he overtook Aleix Espargarò and Bradley Smith before the end of the first lap. Pol Espargarò in fourth was soon to follow, as Rossi continued to hunt down Andrea Dovizioso, passing him on lap four.

As Marquez crashed out a lap earlier, The Doctor was riding in second place and gave all he had to reel in Lorenzo, who was 1,5s ahead, but the Spaniard was quick to respond. Rossi kept his head down and was able to reduce the gap to nearly a second in the final stages of the race, but came just short. He went on to claim second on the podium, with a 18.570 second gap to Dani Pedrosa in third. 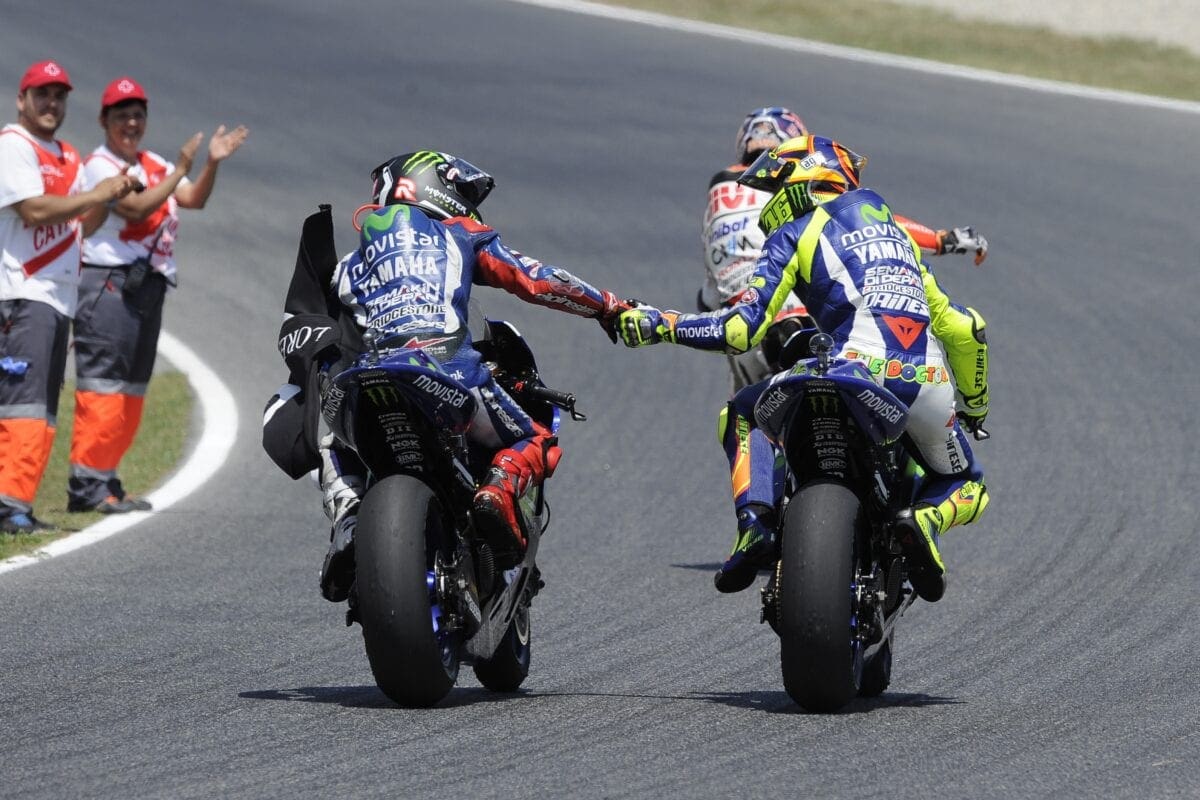 Lorenzo‘s win delivers 25 points, keeping him in second position in the championship standings with a 137 points total, just one point behind Rossi. The Doctor’s podium scored him 20 points and keeps him in the lead in the overall standings, now on 138 points.

The MotoGP riders will be back on the Catalunya track tomorrow for an official test before visiting Aragon for a private test. They will then head to the Netherlands for the next GP held at the iconic Assen TT circuit on Saturday the 27th of June.

After the race, Lorenzo said: “This was my hardest win of the season, but Qatar, Austin and Argentina were tougher when it comes to racing. To be honest, the last ten laps of today‘s race were probably one of the most hard and intense laps of my career. Valentino was very fast and knowing that the track was really hot and there was less grip than yesterday, I‘m happy with the results. My bike was working a bit worse than yesterday when I was able to ride 1‘41s, but that wasn‘t possible today. For Valentino it was the opposite, he almost always reaches this incredible level of performance on Sunday. When he reduced the gap from 2.0s to 1.4s I was really worried that I would lose this race. I needed to push and risk more while the bike was already moving a lot, which is what I did on the last ten laps. After yesterday‘s practice I expected, maybe not an easy victory, but more distance between me and the rider in second from the middle of the race onwards. I was able to keep my rhythm and stay focused and I really want to thank the team for their efforts and congratulate them with the fourth consecutive victory.”

Valentino Rossi added: “Throughout my career I always thought that when you take 20 points, it has been a good race. I enjoyed this weekend, which was an important one, because I came from three races where I struggled a lot and I don‘t like to arrive in third when Jorge wins. This time we found a good setting and balance on Friday so we worked for the race, which I know I‘m stronger in. I was good in the beginning when I was overtaking and I was fast, but it was not enough, because when I arrived to the second position Jorge already had a 1.5s gap. It‘s a great shame because I had the pace to fight with him and I could have been very strong in a battle, because I was very strong in braking. I‘m still in front in the championship, but this race was important because we made a step forward and now we have to keep working like this and improve our qualifying. The key is the tyre rule, because Jorge is better than me in qualifying and he can position all the bikes with the extra soft tyres between me and him on the grid. It‘s a shame because yesterday I had the potential to be in the top five but it gives me great motivation to try again in two weeks in Assen.” 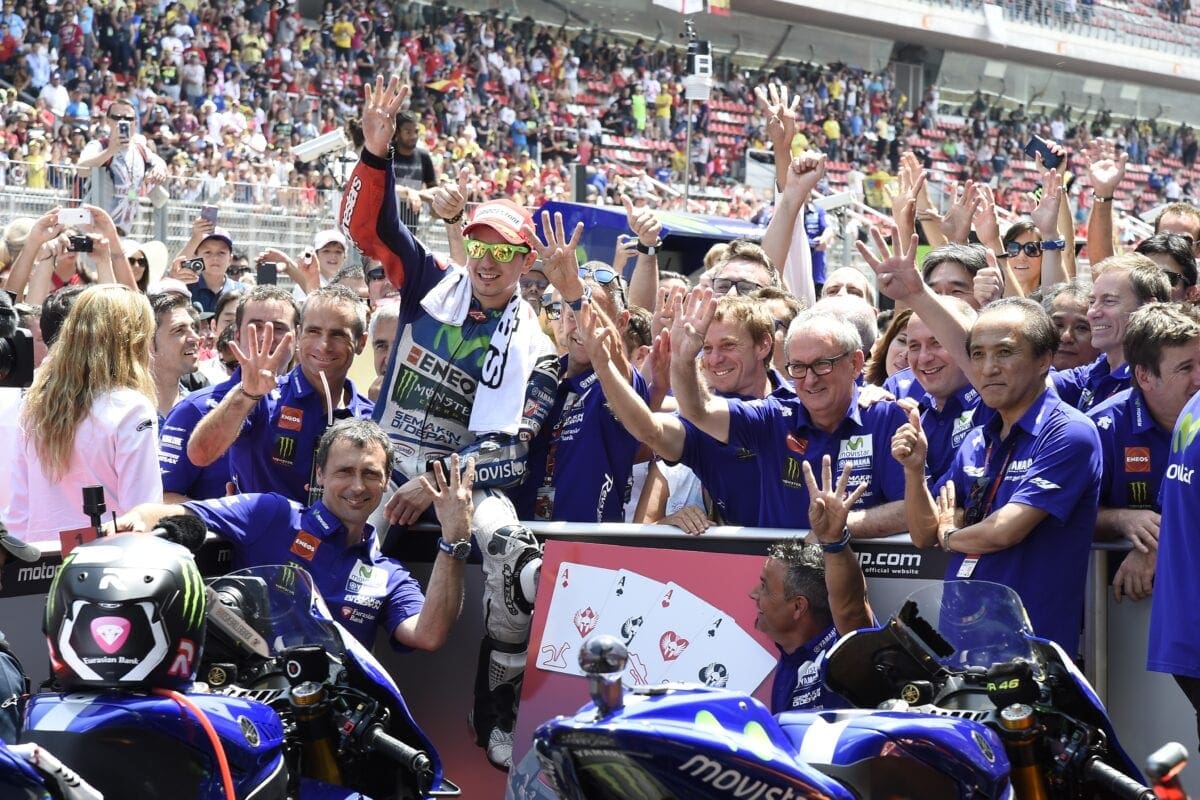