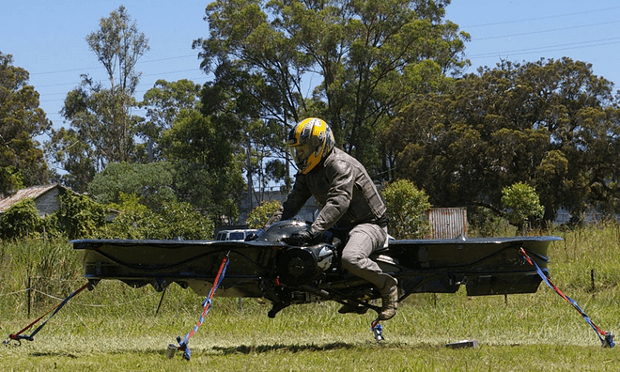 OK, so if you’re into bikes, Star Wars speeders or whatever then this will mean a lot. To us this is flippin’ mega.

According to reports, the flying bike is so far only remote controlled but it’s powered by a BMW R1100GS engine and has motorcycle controls which an eventual pilot will use!

Grant Stapleton, the co-director of the company with Malloy, said no one had yet flown on the new version of the hoverbike: “At the moment, it’s radio controlled, it’s flown as an unmanned vehicle. We haven’t put someone on it yet and won’t do for a little bit, while we’re working on its flight performance, things like that.”

Check out the kickstarter video for the hoverbike. Look, it ain’t going yet but quite frankly who cares? This has got to happen. Calling Doc Brown from Back to the Future… Calling Doc Brown…