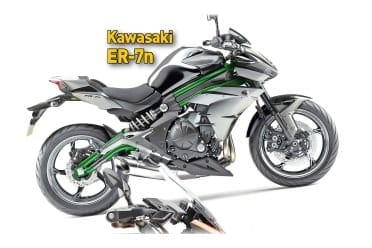 Now, this is something that’s been sent to us a fair bit out of the blue today so all we can do is basically pass on what we’ve been told – but this is the hot rumour for today – and it’s that Kawasaki is going to turn out an Er7 naked bike as part of its 2016 range.

The bike is said to be a bigger version of the popular 649cc with some form of electronics package (ABS as standard and possibly some basic traction control fed from the ABS system), the bike’s styling is also coming in for a revamp to ally itself more closely with the larger Kawasaki bikes (like the H2).

Price-wise, we hear that the new bike won’t be much different to the current bike, so figure on £6k-ish for the new bike.