SCOOP: Indian to bring back the flat-tracker glory! 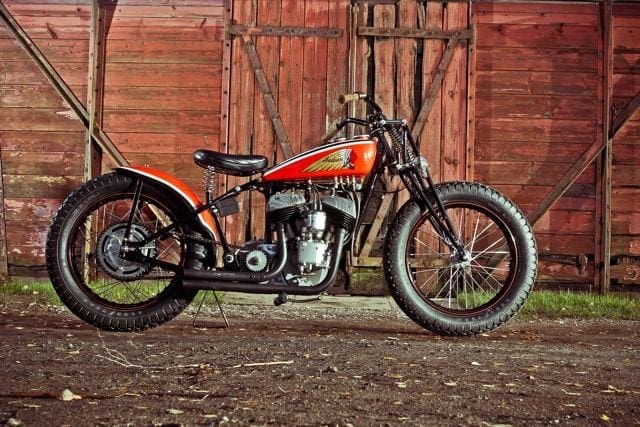 Something like this from Indian? In a modern guise? Yep, we’re in. Look at this thing! So cool!

Indian is building a pure-bred, road legal flat-track style motorcycle that will race on the Mile and Half Mile tracks in America by late 2016 or early 2017.

There are no official sources to quite this claim from at the moment, but according to a flat-track source, Polaris Industries – the company that owns the Indian brand – has said to the American Motorcyclist Association that it will field factory-supported motorcycles at the end of next year. Back in the 1940s Indian’s were widely used in flat-track and are as iconic with the history and style of the sport as Norton is with classic British road racing.

Polaris also owns the Victory brand and has recently, with help from the customs builder Roland Sands, built a mountain-chasing big muscle naked to race in the Pike’s Peak event.

What does this mean for the road-going market? Well it is widely believed that the Pike’s Peak bike was the first tentative steps into a road-going version of the bruiser. That was seen as the first motions in a first-wave move to get new customers for both Victory and Indian rather than relying on the already-heavily-saturated big Harley-esque cruiser market which both marques are competing in. So the news that Indian will return to the fast-and-scary Mile and Half Mile competition arena fits in very nicely with the claims that we’re going to see not only a big muscle bike from Victory but a road-legal, full-on flat-track style custom bike from Indian, too.

Bring it on, Indian.